It's important that ski area mech techs have a solid understanding of the metals they're using. 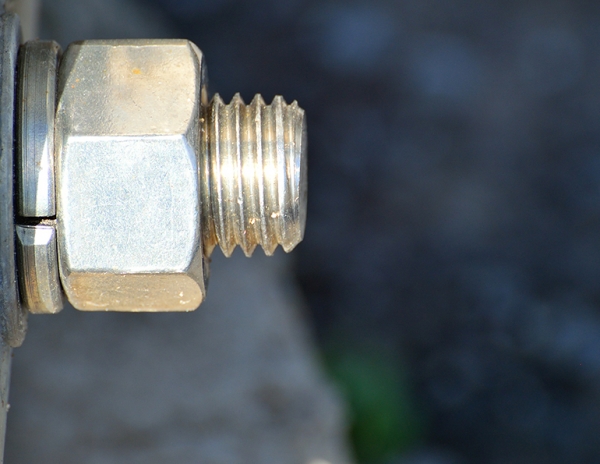 Most of the time, we tend not to care what’s inside that chunk of steel or aluminum. But there are times, like welding on a nut or bolt, or hammering on a hardened piece at low temperatures, when that lack of knowledge can cause disaster.

When working with metal, there are some critical definitions and concepts to remember. A solid understanding of the different materials being used, and the effect that temperature might have on them, is vital for all employees who work with them.

The first concept is hardness. We tend to think that most metals are hard, but some, such as ball bearing rings, are much harder than others, like ordinary nails. With common metals, like steel, cast iron, copper, and aluminum, harder almost always equals stronger, but it doesn’t mean tougher. Understanding the difference in those terms is critical.

For example, ball and roller bearing steel is extremely strong, but not very tough. If it is hit with a hammer, it can shatter into a zillion pieces like glass. Other metals, like non-magnetic stainless steel, are weak, but extremely tough, and can be hammered repeatedly without breaking.

Let’s break down strength and toughness a little further.

Strength is the ability of a material to resist a force that is applied relatively slowly. It’s measured in pounds per square inch (psi) in the U.S., and in megapascals (mPa) in the metric system. Common mild steel, such as structural steel or ungraded steel nuts and bolts, has a yield strength of about 40,000 psi, meaning it would take a 20-ton force to actually stretch a one-square-inch bar. On the other hand, hardened bearing steels typically have a yield strength of about 300,000 psi, and a one-square-inch piece of bearing steel could withstand a load of 150 tons without stretching more than 0.2 percent.

Toughness is the ability of a material to withstand a shock load, such as hammering or other impact, and is measured by the amount of energy the material can absorb before instantaneously fracturing. Sketch #1 illustrates this: a test sample is held securely, the hammer is released and swings down, hitting the piece and continuing up to a stopping point. The difference in start/finish elevations shows how much energy was needed to break the piece. 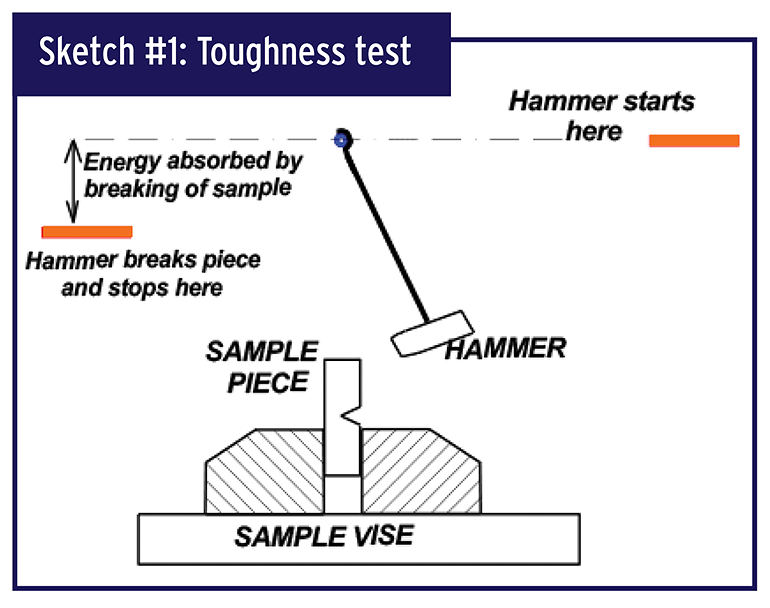 The toughness of some metals can vary tremendously with temperature. For example, 20 years ago, some Hall chairs failed. They were made from the wrong steel, and as the temperature dropped, they became far more brittle than they should have been. Chairs broke and fell with only mild impact loads, such as the chair striking a steel-reinforced concrete pedestal after a guest unloaded awkwardly, swinging the chair.

Table #1 shows some common steel, stainless, and aluminum alloys with their typical impact toughness values. Clearly, they often become more brittle as the temperature drops. Carbon can be added to steel to make it stronger (SAE 1020, 1030, and 1040, below), but the added strength also makes it more brittle at low temps. Always be very careful about hammering on metals at low temperatures. 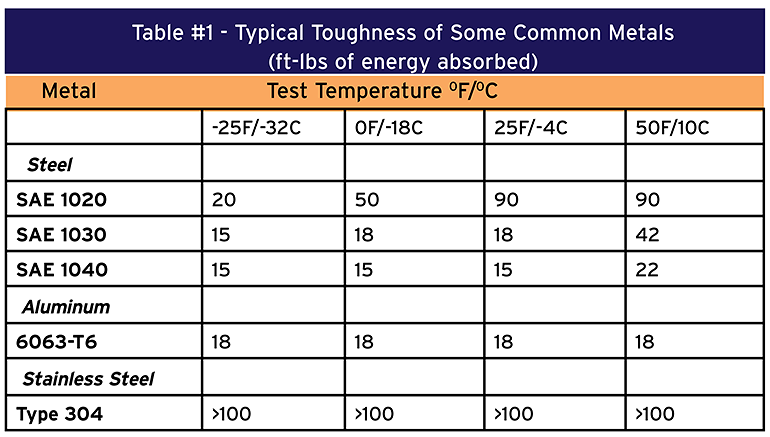 How Are Metals Strengthened?

There are two common ways of making metals stronger: heat-treating and strain- hardening. Both can be used with a few metals, like mild steels. Table #2 shows a variety of metals common to ski areas. The first three are plain carbon steels, followed by two low alloy steels. The last two are other common metals. Note: For the plain carbon and low alloy steels, the last two numbers in the designation show the carbon content. For example, the “20” in SAE 1020 shows the carbon is 0.2 percent of the alloy. The higher the carbon content, the stronger the steel.

Table #2 shows the difference in strength between metals when they first come out of the furnace (annealed) vs. strain-hardened and heat-treated versions. Note: The data for the heat-treated steels show the properties after they have been heated, quenched, and then tempered at 1100°F (593°C). 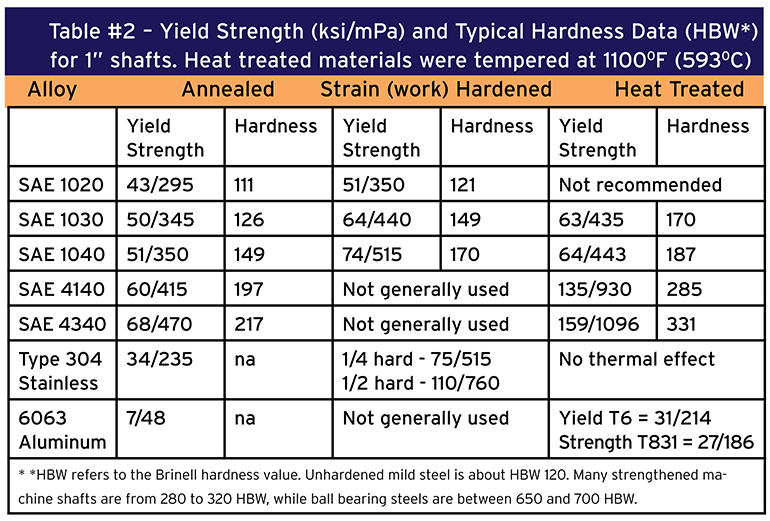 Strain hardened steel—often called cold rolled or work hardened steel—is strengthened by being rolled out at relatively low temperatures, below about 400°F (200°C). The process is a bit like rolling out a pie crust. A thick steel billet is rolled out repeatedly into a much thinner layer. This distorts the internal structure of the steel, which makes it much stronger.

Strain-hardened parts are common, such as the steel table and chair legs in the cafeteria and the frames on snowmobiles and ATVs.

Thermal (heat treated) hardening of steel happens when it is heated above about 1400°F (760°C), then quenched (rapidly cooled). The atomic crystal structure—the way the atoms are arranged inside the steel—changes when it is heated to that level, and rapid cooling locks that much-stronger arrangement into place, hardening the steel. Then, typically after cooling to room temperature, the steel is reheated and held at an elevated temperature for an hour or so. This reheating is called tempering. This reduces the hardness and strength, but the metal becomes much tougher.

The bolts we commonly use are heat-treated and tempered. SAE Grade 5 bolts have minimum yield strength of 85,000 psi, and the equivalent metric 8.8 bolts have a minimum tensile strength of 640 mPa. They are made from a medium carbon steel, similar to SAE 1035, heated to more than 1400°F, then quenched and finally tempered at about 1150°F.

In comparison, SAE Grade 8 and metric 10.9 bolts with yield strengths of 120,000 psi and 900 mPa are also heated to more than 1400°F and quenched, but tempered at a lower temperature—950°F—so they’re stronger. However, they aren’t as tough—instead of stretching, they’ll snap.

The data above show:
• As steels get stronger, they are more sensitive to impacts.
• Toughness (impact strength) of steel drops along with temperature.
• Metals can be strengthened by both strain-hardening and heat-treating.

The two things we have to be careful about are heat and hammering. If metal is heated by, say, a propane torch or welder, the temperature can permanently weaken the metal. If the weakening is in a high-stress area, you’ve just created a disaster.

Stainless steel that’s not magnetic, such as the Type 304 in Table #2, is relatively weak and extremely tough at all of the temperatures we’ll see. But we still need to be careful, because most stainless parts are strain hardened, and heating to temperatures even as low as 500°F (260°C) will appreciably weaken them.

Wrought (rolled) aluminum alloys usually have good ductility, and hammering is not a concern. However, most of what we use is heat treated, and can be weakened at even 350°F (175°C). Unfortunately, many of the cast aluminum parts we’ve worked with have been relatively brittle and not suitable for impact loading.

Ski areas use a variety of metals. It’s important to make sure staff working with them are well-versed on the strengths and weaknesses of them all.