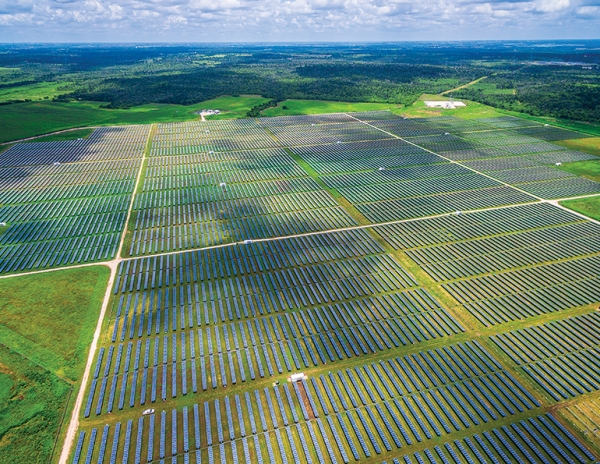 By any measure, the Vail Resorts power play announced in November was big. Vail’s virtual power-purchase agreement will give it 310,000-megawatt-hours of production annually from the Plum Creek Wind Project near Wayne, Neb., beginning in 2020. That’s sufficient, says the company, to meet the company’s projected fiscal year 2019 electricity use at its North American operations.

With this, the company will have achieved 100 percent net-zero emissions a decade ahead of its 2030 goal.

Others in corporate America have been hurrying to make the same claim. The Rocky Mountain Institute, an energy think tank, reported in October that corporate purchases were expected to surpass five gigawatts of power in 2018. That’s roughly a 1,600-percent increase from 2013. Among the big buyers: Facebook, AT&T, Walmart, and Microsoft.

Most of these deals are virtual power-purchase agreements, similar to the one inked by Vail. The power is not directly used by the purchaser. Rather, the purchaser gets credit through the financial device called renewable energy credits. In all likelihood, the wind power purchased by Vail will actually be used somewhere in the Midwest—possibly at one of its ski areas in Michigan, Minnesota, or Wisconsin, conceivably at Stowe.

But the Nebraska wind-generated electricity will most certainly never power ski lifts on Vail Mountain. Cheek to jowl, Nebraska and Colorado lie in separate electrical grids. Nebraska is in the Eastern Interconnection, which is connected via six direct-current interties with the Western Interconnection, in which most Vail Resorts areas operate. Imagine these direct-current interties as narrow gates. It’s not easy to move power through these narrow gates.

Xcel Energy recently announced it plans to reach 80-percent renewables by 2030 using existing technology. By 2050, it seeks to achieve a more ambitious goal: 100 percent carbon-free energy. But the company—which operates in eight states, supplying electricity to many ski areas in Colorado—isn’t sure how far it will get to that 2050 goal.

“We’re accelerating our carbon reduction goals because we’re encouraged by advances in technology, motivated by customers who are asking for it, and committed to working with partners to make it happen,” says chairman Ben Fowke.

How will it get to 100 percent carbon-free electricity? Everything is on the table, including carbon. Among the ideas Xcel intends to study with partners is carbon capture and sequestration, a technology that so far has achieved little success, and at high costs. That would allow it to continue operating its newest coal plant in Pueblo, Colo. Another tool on the table: nuclear power.

The challenges can be understood in the context of Holy Cross Energy, the electrical co-operative that delivers the actual—not the virtual—power to Vail Mountain and Beaver Creek.

Holy Cross in September announced plans to achieve 70-percent renewables by 2030. The co-op is currently at 39 percent, most of that hydroelectric power from big dams in the West. Where will the rest come from? Holy Cross faces another challenge: it owns eight percent of Comanche 3, one of the nation’s newest and largest coal-fired power plants. (Xcel is the majority owner.) The plant went on line in 2010 with an expected useful life to 2070. What to do about that?

Even if Holy Cross sheds that coal plant, many challenges remain to achieve 70-percent renewable generation by 2030. The company envisions most of this additional renewables power being imported from solar- and wind-rich regions elsewhere in Colorado. The plan also calls for substantial local generation by solar and perhaps backed by batteries.

What, then, to make of the proliferating 100-percent renewable goals in ski towns across North America, especially in the West? The Sierra Club’s 100-percent commitment program has identified 90 cities, 10 counties, and two states with 100-percent aspirations. Prices of renewables have tumbled, and battery storage is poised for a similar trajectory in the next decade. But even the National Renewable Energy Laboratory, in a 2012 study, could only identify a pathway to 80 percent.

Jim MacInnes says that the renewable goals are nice, but that reducing greenhouse gas emissions as quickly as possible is the most important goal. “That’s more important than saying we’re trying to achieve 100-percent renewables,” says MacInnes, the chief executive of Michigan’s Crystal Mountain Resort. “That’s an important distinction.”

At Crystal, MacInnes has installed geothermal heating, LED lights, and EV charging stations, plus a lot of energy efficiency programs to reduce demand.

He knows electricity. After serving in the Vietnam War, he got a bachelor’s degree in electrical engineering and then an MBA in finance. He helped design a pumped storage facility in Michigan and developed renewable power projects in California before arriving at Crystal Mountain in 1985. He became chief executive in 1987.

Cherryland, an electrical co-operative similar to Holy Cross, delivers power to Crystal Mountain. That supply is 56 percent non-carbon, a chunk of it from a nuclear power plant in Illinois.

Crystal Mountain has 500 to 600 kilowatts of demand most of the year, hitting 4.5 megawatts during winter. MacInnes calls this a “dinky profile” compared with the giant and steady demands of General Motors, Dow Chemical, and other industrial users in Michigan.

So MacInnes is focused on moving these big users, not just cutting Crystal’s power consumption. “I would rather spend my time advocating with the parties that can really make a difference, the public service commissioners. That’s a more effective way of getting the job done and making a bigger impact,” he says.

MacInnes has been engaged with several organizations in Michigan advocating for change. For example, he helps provide direction for the Michigan Conservative Energy Forum. “We mainly focus on promoting pro-renewable policies and legislation to Republican legislators,” he says. “It is very important that we bring along Republican legislators. They respond to things like energy security, jobs, and low costs as an argument to move to clean energy.”

More directly, MacInnes has been chairman of the Michigan Utility Consumer Participation Board for more than seven years. It has funneled $750,000 in recent years to five member groups who advocate for lower-cost energy solutions. Invariably, those lower-cost solutions avoid building new fossil fuel infrastructure. One such solution: meeting energy needs through energy efficiency programs and demand-management incentives.

Advocacy doesn’t always persuade the state utility commissioner, but MacInnes says, “We believe we will be able to make more progress as we bring in more experts making the same argument in case after case.” Other groups are following a similar course.

Researchers disagree about the most effective way to decarbonize electrical supplies, and whether it will include nuclear energy. But battery storage will almost certainly be a critical component of that effort. It helps that prices have been dropping along the curve of solar panels a decade ago. State mandates in California and New York have accelerated the technological curve and helped bring down prices.

Now, large-scale battery storage is finding its way to places like Colorado. Xcel Energy plans 225 megawatts in storage as it expands renewables to 55 percent by 2023. The utility delivers power to Breckenridge and Nederland, two Colorado ski towns with 100-percent renewable goals.

From his post in Michigan, MacInnes can foresee the need for ultimately one national energy market, with the electrical barriers that now exist giving way to one synchronized grid. That’s the sort of thing that ski area operators could advocate for if they want to decarbonize their supplies of electricity.

“We need to stop investing in the fossil fuel economy and shift these investments to clean energy projects,” says MacInnes. “That includes vehicle electrification, too.”