Taking It to The Streets

Quebec's Mysnow Experience brings the mountain right into the city. 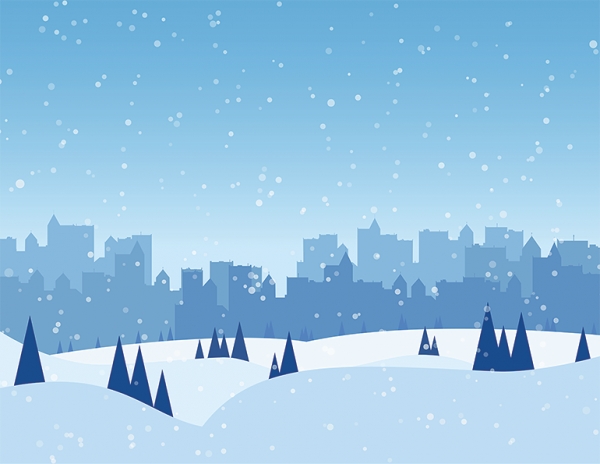 In order to lure skiers and snowboarders to ski areas, sometimes you first need to bring the mountain to the people.

That’s the thinking behind the Quebec Ski Areas Association’s (ASSQ) Mysnow Experience, a free skiing and snowboarding program held each winter at three city parks within or near Montreal and Quebec City, as well as at special events including the Gatineau Winterlude in Ottawa and Fête Des Neiges in Montreal. Mysnow Experience is one of several programs ASSQ spearheads, with the support of its member ski areas, aimed at introducing Quebec (and Ottowan) youth to skiing and riding.

At the Mysnow program sites, ASSQ sets up a conveyor lift and ski hill—using natural slopes if available, building a slope using cement blocks if not—and provides equipment and an on-snow introduction to children ages 5 to 8. The program runs on weekdays for school groups and weekends for the general public from January through mid-March. All participants receive a voucher code for a one-hour skiing or snowboarding lesson that can be used at any of roughly 50 ASSQ member ski areas during the current winter season.

ASSQ chose its parks based on their proximity to population centers as well as established winter-sports facilities, such as hockey rinks and tubing hills, and an ability to make snow—the latter being perhaps the biggest challenge for finding suitable sites.

“In some parks they have cross-country skiing, so they have to have nice snow conditions,” says Yannick Charette, director of youth programs for ASSQ. Two of the parks, for example, have their own snow cats and snow guns. “But if they don’t, we work with HKD and come with our own snow guns.”

At the sites, a 50-meter (165-foot) conveyor serves a slope with a gentle, eight percent pitch, and the hill includes terrain-based learning features, such as a mini halfpipe and rollers.

Each Mysnow location is run by 8 to 10 staff hosts, who are all trained to conduct activities with the kids that make each initiation safe and fun. They are not necessarily certified instructors, and ASSQ president Yves Juneau says the experience is not meant to be a lesson, but a fun introduction to sliding on snow that inspires kids to use the voucher they get to take a real lesson at one of the participating ski areas.

“We just want kids to understand that they can go down the slope and keep control,” says Juneau. 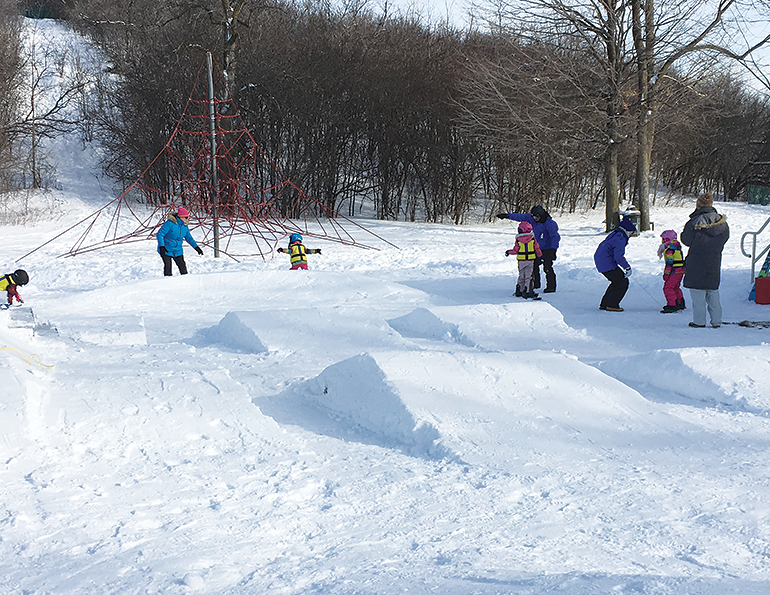 Temporary trailers serve as the equipment rental shops at each site. Weekday school group participants submit sizing info ahead of time so their equipment is ready upon arrival. Weekend walk-ups are fitted on-site with skis or snowboards, boots, and helmets. The information collected is entered into an ASSQ database. Voucher codes for ski lessons are distributed after each session.

The Mysnow Experience, which costs about C$500,000 annually to run and includes sponsor buy-in by Burton, Rossignol, and Quebec sporting goods company Sports Experts, has yielded tangible and measurable results.

In 2017, 33,209 children took part in the Mysnow program alone (22,831 through schools, and 10,378 on weekends). Nearly 500,000 kids have been introduced to sliding on snow since the program’s inception in 2005, when it was launched in response to demographic trends showing an aging population of skiers and snowboarders in Quebec, and less interest among youth in the sport.

“We have a lot of competition in Canada from hockey, tennis, and soccer,” says Juneau. “We wanted to do something that would allow us to be in contact with kids at an earlier age. The entire idea is to get kids to try out the sport and then go to a ski area.”

The goal also is to get kids interested in snowsports before they become too immersed in technology, says Simon Page, director of guest experience at Sommet Saint-Sauveur, located about 45 minutes from Montreal. “Our competition isn’t just other sports, but the iPhone,” he says.

Bringing the program to the city also exposes a different population to the sport, with strong interest from the Asian and Hispanic communities in Canada. Charette says that’s why it’s important to bring the program to city parks, where families of all backgrounds are getting outside in winter.

Canada has a strong winter sports culture, with 12 to 15 percent of the population self-reporting as skiers or snowboarders, says Page. “That’s a way different number than in the States, but I like to think of it as 85 percent don’t ski. There’s still a lot of room to grow.”

Last season, 14.4 percent of Mysnow participants booked a lesson at a Quebec ski area. Historically, the conversion rate is far greater for the weekend programs (between 20 and 30 percent), while only 3 to 5 percent of weekday school program participants subsequently booked a lesson. Juneau says the direct interaction with parents is the reason weekends convert at a higher rate. Weekday kids are given a voucher to take home, but the parents may never see it. 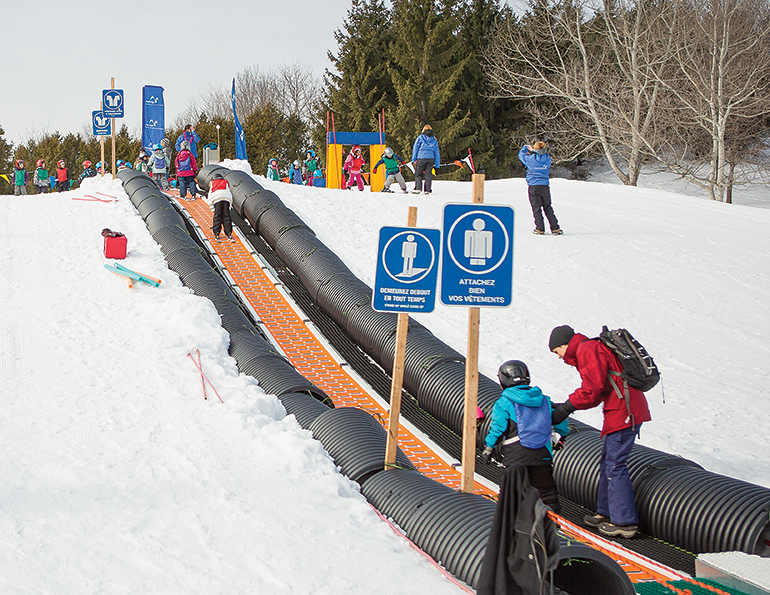 Still, it’s important for ASSQ to continue offering the program to schools, because other sports federations—tennis, golf, baseball, badminton, etc.—have school programs, too. If nothing else, consistency raises awareness.

Initially, the Mysnow Experience focused on skiing, but snowboarding was added about five years ago, incorporating Burton’s Handlebar learning tool. ASSQ also launched an all-season dry slope program in 2017 at the Mysnow site in Laval, investing C$70,000 in an artificial surface from 365 Yiippi, which gets covered in snow in winter. 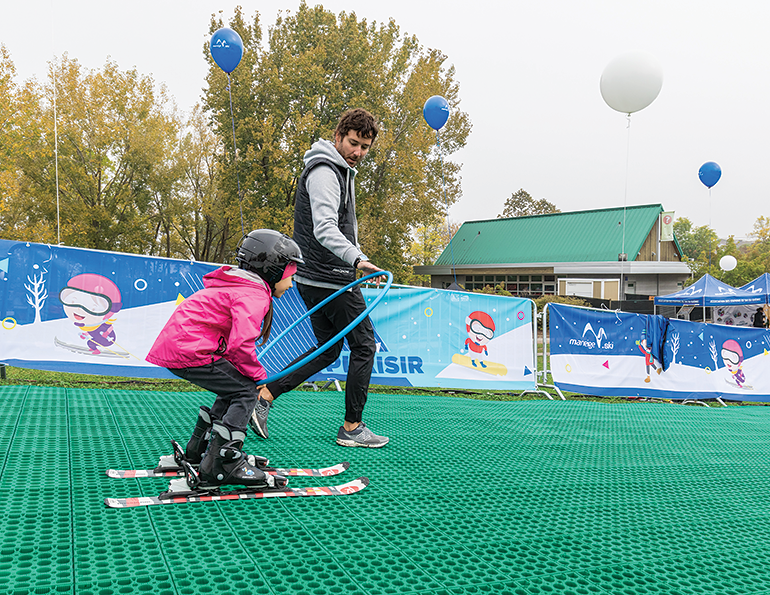 ASSQ invested in an all-season dry slope at the Mysnow site in Laval in 2017, which gets covered in snow in the winter.

Ultimately, the goal is to get more kids—and families—to ski areas. The 5- to-8-year-old bracket was chosen not only because it’s an ideal time to introduce children to the sport, but also to help feed the Canadian Ski Council Snowpass program, which provides 9- and 10-year-olds a pass good for three visits to 156 ski areas across Canada for just C$30.

About 50 of ASSQ’s 75 member ski areas are located close enough to the Mysnow sites to justify setting aside lesson inventory for participants. Page says that Les Sommets’ five ski areas reserved 2,000 potential lesson spots last year—mostly at the start and end of the ski day—and had about 700 kids show up, of whom nearly 20 percent came back for another visit later in the season.

“That’s 700 people who would have never skied here before,” says Page, who adds that all lessons are accommodated with existing instructor staff.

For many years, Mysnow participants got a voucher for a free lesson, but in 2018-19, ASSQ is experimenting with charging C$25 for the lesson, then offering a free lift ticket that can be used on a later visit. “We know it typically takes three visits for people to get hooked on the sport,” says Juneau.

When the lessons were free, “We had a lot of no-shows,” says Charette. Page says 35 to 40 percent of those who booked free lessons at his resorts didn’t show up. Under the new system, parents get a voucher code that they can use to go online and view the lesson inventory at participating ski areas, book a day and time, and pay for it all in one spot

Charette says that the offer is still a very good deal for a lesson that otherwise would cost C$60 to C$100, and is a good investment for Quebec ski areas, too. “Before, we put a lot of money into marketing on TV, but we decided to do more roots programming,” he says. The outcomes from the Mysnow Experience are highly trackable, providing valuable data and a growing database. 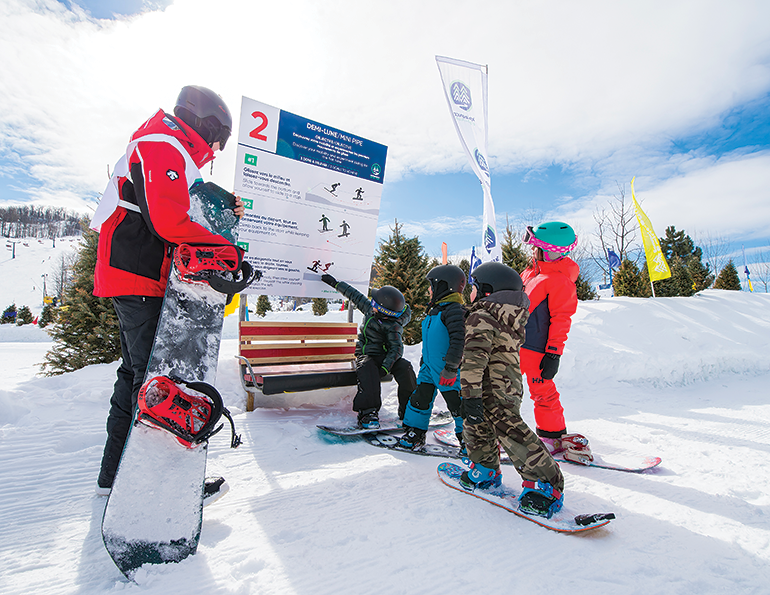 The program continues at local mountains, such as Mont Saint-Sauveur (pictured), thanks to a voucher provided to all participants good for a one-hour lesson at any participating resort.

In addition, ASSQ partners with 23 school boards for in-school programs, providing phys ed teachers with teaching materials and gear. About 20,000 students grades K–2 were introduced to skiing last year, and another 3,000 5th and 6th graders in 20 schools try snowboarding as part of the Burton Riglet tour.

Sampling in the States

More limited variations of the concept have been tried in the U.S., including the annual Winter Jam festival in New York City’s Central Park, sponsored by the state tourism department and ISKINY—the association of New York ski areas—and in partnership with the New York City Department of Parks and Recreation.

Held on the third Saturday in January, Winter Jam features a manmade snowfield created on a natural slope near the park bandshell, where free equipment rentals and learn-to-ski sessions are offered.

“It is truly a wonderful event—lots of work, but well worth the effort,” Brandi says, adding that discussions about expanding the program to other urban areas are underway. “We are kicking that around—maybe Syracuse, Buffalo, and Albany, maybe in 2019-20.”

And the concept is being considered on a national level, too, according to PSIA/AASI CEO Nicholas Herrin. “We’ve had a lot of discussions about bringing the slopes to the metropolitan areas,” he says. “It’s a huge focus. Giving people the opportunity to ski and slide is critical for our industry. It hits a diverse population—it’s a group of people who may not have thought about skiing or snowboarding, or even snow tubing.”

Wherever and however kids are introduced to skiing or snowboarding, never forget the most important thing. “The big-time focus is on fun,” says Page. “If you learn something but it’s not fun, chances are you won’t come back.”