Year two of this leadership program begins with confessions and advice. 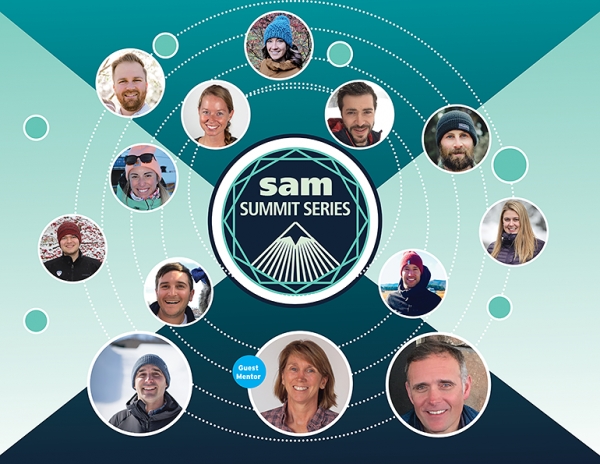 Season two of the SAM Summit Series kicked off in November with a new group of 10 talented up-and-comers who were chosen from dozens of nominations gathered in the fall. This group will benefit from the insights and knowledge of an incredible collection of 10 industry leaders who will serve as advisers and mentors throughout the series.

The inaugural Summit Series last winter featured six monthly conference calls, each with two or three mentors sharing their experiences on a predetermined leadership topic with the group of mentees, all facilitated by Paul Thallner of High Peaks Group. The mentees would then complete related exercises with the guidance of Dr. Natalie Ooi, director of Colorado State University’s graduate Ski Area Management Program. The content of the calls and some of the work done by the mentees was shared here in the pages of SAM, online at saminfo.com, and was the inspiration for launching PodSAM, our growing podcast channel.

This time around, we’ve enhanced the leadership development aspects of the program, which benefits the mentees and helps us deliver even more useful content to the SAM audience.

The format of each Summit Series call remains similar, but this time you’ll hear from the mentees a bit more. Also, each mentee will have a monthly one-on-one call with a mentor throughout the winter, so each mentee can pick his/her mentor’s brain. Additional deep-dive exercises with Dr. Ooi will add to the takeaways and learning. All of this is aimed at contributing to the development of the mountain resort industry’s next generation of leaders.

PAUL THALLNER: Anyone who’s been part of an organization knows communication is very important to ensuring that everything gets done in a way that the business can succeed and thrive. Also, for people to feel like they’re making a contribution and that their time is well spent. So today we’re going to talk a little bit about what makes for effective communication and why it’s important.

Put yourself back earlier in your career, when you were given the opportunity to communicate something and it didn’t go so well, and you learned a lesson as a result of that. Could you share one of those experiences with us?

KELLY PAWLAK: To start, I think that over-communication is important.

This particular situation was when I was at Mount Snow, and I had ordered, I think, 700 chairs for the Main Base Lodge. And they were scheduled to come the Monday before MLK weekend. So we started getting rid of all the old chairs—we donated some to the community and some had to go in the dumpster.

By Monday, we were ready for the truckloads of chairs to come. I had a team assembled and we were going to put the chairs together and have them in place by Friday night for the big holiday weekend. Of course, they didn’t arrive on Monday—and then we couldn’t find them.

The chairs wound up arriving on Friday. We had this group of people assembled—ski school, patrol, you name it—everybody was there to help. What I didn’t think about, since I was running around like a crazy lady ordering pizzas for the crew and everything, was actually stopping and having a training session on how to assemble the chairs.

So now everybody is taking the chair parts out of the truck in different ways and assembling them. We eventually got through it, at probably 10 at night. The next morning I came in and all of our guests were falling off the chairs, because we never took the time to explain how to assemble them. More than half of the seats were put on the wrong way so they were slanted down.

That’s something simple that goes back to the communication issue of “nobody ever told me how to do it.” We just said, “Get it done,” instead of, “Hold on, we’re going to take five minutes and figure out how to put this together.”

I think when I left Mount Snow I was still finding a few of those chairs that were put on backwards.

PAUL: Jay, can you top that one? That was pretty awesome.

JAY SCAMBIO: Well, I’m sitting here chuckling, because we have a small cafeteria project going on right now and we are replacing old 1980s seat cushions with new cushions. And I wrote a note to talk to the food and beverage manager and make sure we’re putting those seat cushions on properly.

In my previous role working for all the Boyne properties, we were looking for a terrain park manager at one of the resorts. Time was of the essence, because they’re a hot commodity these days. It was summertime, people are on vacation, coming back from vacation, somebody else goes on vacation. And eventually I was kind of like, geez, how are we going to get this done? I was cc’d on an email to someone I knew was on vacation, and I thought, well, it’s not to me, but I’ll send a message. And I sent a message back to this HR person saying no, we don’t want to do what she was thinking, we want to do something else.

It was a perfect example of communication where I really should’ve just picked up the phone and talked to that person to make sure they understood what I was saying, versus how it was taken. My email was too firm, and it came across as, “NO, YOU CAN’T DO THIS!”

That situation taught me a ton about how an email could be really quick and easy, but a phone call is better in situations where you want to make sure the message is heard properly.

ERIC KERTZMAN: As leaders of the industry and your respective resorts, in your experience, what methods of communication have led to greater accountability, and therefore execution, especially when attempting to reach a wide variety of departments?

STEVE WRIGHT: For me, all of this boils down to building and strengthening relationships with your team. And that’s where for us, and for me, historically, everything starts there. You want to be listened to, and then be willing to hear what your staff has to say. Understand what it is that they’re concerned about.

I think in our industry, it’s very easy to pigeonhole different departments into different communication styles. Vehicle maintenance and mountain ops, they want just the facts. They don’t want to bullshit around, they’re old timers. But the reality is, those departments are the ones that it’s most important to build those relationships with, because historically, no one spends the time to do that.

JAY: In middle of the winter, we have 900 employees at Loon. Being able to communicate with the entire group and all of the divisions that we have is a daunting task for anybody. Some of the best ways to look at it is starting small with your team.

Here at Loon, we try to limit a person’s direct reports to six to 10 people, and really focus on driving the message from the office here. That message is a byproduct of our senior team and me getting together and talking through our challenges and our goals and projects. So, the senior team fleshes that all out, then we push that to our divisions, and to those department managers within those divisions to help get the word out.

Now, is it best served as email communications or face-to-face meetings? I think everybody’s a little different. And every leader that we have at the resort communicates and takes in information in a different manner. And really, our division leads, our senior team, they know how their people work, so we try to leave it to them to do their thing.

There are some great tools nowadays to get messages out there. Email is one, but it can also be problematic. App-driven services for emergency or critical communication, or information sharing, is an important one too.

It comes down to identifying what type of message it is, and what the importance of it is, and decide from there. But when you are ready to push it out there, make sure that all the facts are together, that all the people, all the stakeholders involved have given you the information that you need, in order to make sure the message is completely accurate before it gets to everybody.

KATIE WHITE: As a recipient, I value a direct form of communication when someone is communicating with me about my performance. And I found that many other people feel the same way. But I’ve also found that, as a supervisor, I struggle being direct with people, especially when it comes to a sensitive situation. How do you deliver a direct communication while still remaining empathetic and considerate of the person’s feelings?

KELLY: Katie, that is such an awesome question. It’s actually one of my pet peeves when it comes to communication. It’s one of those things that I wish we taught kids in school, because I struggle with the exact same problem. And so many people I’ve worked with have struggled with that problem. That’s one thing I’m working on—giving timely, honest and constructive feedback.

I think it’s about being prepared and going in and knowing exactly what it is that you need to get across, and not attacking the person.

In an education seminar that I went to, they did an example where, let’s say that somebody is constantly late for a meeting. It’s not attacking the person by saying, “When you show up at the meeting late, it makes me frustrated,” and letting them know how it makes you feel, “because sometimes I have to repeat stuff and other people are making it here on time. So, I feel like you’re kind of cheating them out of their time.”

So, that’s the way I try to do it. Never attack the person, and always tell them how it makes you feel, and exactly what that thing is that you want them to change that is the problem.

STEVE: Nobody is good at this. You’ve got the president of NSAA saying that she’s not good at it. Believe me, nobody is going to raise their hand and say, “Boy, I’ll tell you what. I’m great at sensitive conversations. I love those.” At the end of the day, your ability to be honest and transparent with whomever you’re speaking is going to be directly connected to the likelihood that that person is going to change.

And when you have a relationship with your staff where you honestly want them to improve, not only for themselves, but for the department, you want to give them every opportunity to improve, and that’s connected to your ability to be transparent. So just know that when you put yourself in that situation where you’re having a difficult, sensitive conversation, if you can be honest and if you can be open and transparent, the conversation ultimately is going to help the other person.