How a Midwest resort company on a tight budget transitioned from antiquated manual snowmaking to a modern, efficient system. 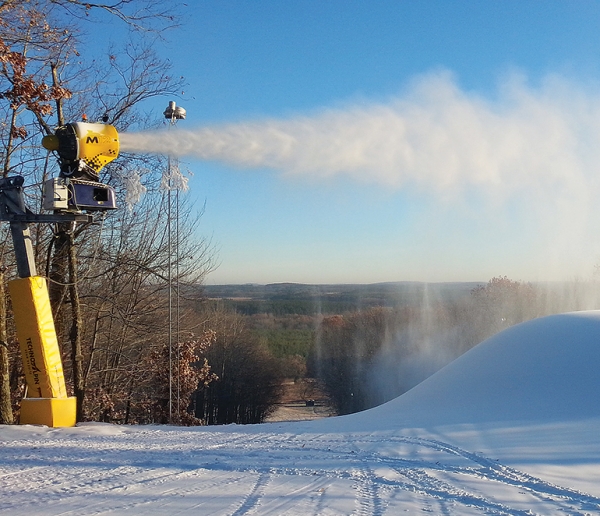 When it comes to snowmaking, most North American ski areas are decidedly old-school. Many European counterparts turn to high-tech solutions to manage when, where, and how much snow is put on their slopes. At U.S. and Canadian hills, it’s typically a veteran snowmaker with decades of experience who is out in the wee hours, adjusting snow guns by hand.

Over the past decade or so, North American ski areas have made huge investments in energy-efficient snow guns and replaced aging infrastructure. But few have made the bigger investment in automation. Those few, though, including the owners of three Wisconsin ski areas, are reaping the benefits.

When Rick Schmitz and his brothers, Mike and Dave, bought Wisconsin’s Nordic Mountain in 2005, the entire snowmaking system for the ski area’s 30 skiable acres was antique. Its aluminum pipes delivered low-pressure water to mid-’70s vintage snow guns. “I’m sure they were amazing in 1975, but they didn’t make much snow unless it was really cold,” says Schmitz.

For a small Midwestern ski area that receives only 40 inches of natural snow on its 17 trails, that was a real problem. “We were losing business because we weren’t consistently open,” Schmitz says.

Clearly, the snowmaking system needed an upgrade for the ski area to be viable. With little money to invest in new equipment, Schmitz slowly improved Nordic’s system, adding newer guns each year in ones and twos as he could afford them.

Few modern guns, however, work with the ancient low-pressure system in place at Nordic Mountain. One exception: the fully-automated T40 fan guns from TechnoAlpin, which not only could operate with low-pressure water but could be operated independently and installed on Nordic’s system one at a time. Even better, the guns were compatible with Nordic’s older guns. “You can have a mix of automated and non-automated guns” on a trail, says Schmitz.

TechnoAlpin allowed Nordic to test a couple of automated guns for a season, and that opened Schmitz’s eyes to the possibilities. He recognized that the ski area’s patchwork system wasn’t a long-term solution, and launched a complete overhaul. Schmitz replaced all of the old aluminum pipe with steel, upgraded hydrants and valves, installed two rebuilt 250 hp vertical turbine pumps equipped with VFDs, upgraded the area's hi-cap wells—the primary water supply—and dug a new 10-million-gallon water reservoir, which serves as a snowmaking water backup.

Proof Is in the Pudding

Over the last 10 years or so, Schmitz gradually replaced the old guns with new ones. And now, Nordic Mountain’s snowmaking system is 100 percent automated, with one snowmaking gun allocated to each of the area’s 30 skiable acres. Most guns are TechnoAlpin T40 fans, with several newer M12 fans in the mix as well.

The total snowmaking investment at Nordic: $865,000. “The cost of automating per gun is probably 30 percent more [than manual guns],” Schmitz estimates, “but the return on investment has been unbelievable. Snowmaking has been the core of our business success. Without it, we don’t have a business.”

That’s not an exaggeration. Company revenues have doubled in the last five years as the system blossomed. Before, the area often struggled to open by mid December. Now, it almost always opens by mid-November, thanks to the ability to make more snow in shorter windows at marginal temperatures.

This season was no exception. As of late January, Nordic Mountain had seen little natural snow, but Schmitz reported a record year to date. “People know we will have snow, and that it will be good snow,” he says. “It has been a huge advantage for us.”

Go With What Works

The Schmitz family also invested in automated systems for two other resorts it has acquired in recent years—Little Switzerland in Slinger, Wis., and The Rock Snow Park in Franklin, Wis., a 20-acre ski and tubing park now in its second season with Schmitz Brothers, LLC.

Little Switzerland first opened in 1941. It's where Schmitz learned to ski as a kid. But the 20-acre ski area ran into hard times and closed in 2007. It was stripped of much of its equipment by the time Schmitz acquired it in 2012.

With a relatively clean slate, the Schmitz brothers installed a fully automated snowmaking system, including two automated pump houses—one with a 300 hp pump, the other with a 125 hp pump—and 21 TechnoAlpin fan guns, mostly T40s along with a couple M12s.

Schmitz and his crew also upgraded and replaced snowmaking pipeline, hydrants, and electrical systems, for a total investment of about $750,000.

The family's third area, The Rock, is about half automated, says Schmitz. Full automation is on the company’s extensive “wish list” for the area. Still, in just two years, the Schmitz have replaced all the snowmaking pipelines, upgraded the pumps and electrical system, and installed 14 automated guns.

Overall, the company has invested more than $2 million in snowmaking at its three areas. That figure would be nearly double, but the company performed all the infrastructure improvements—pipeline, electrical, gun installs, etc.—in-house. Further, Schmitz kept costs down by purchasing several used, refurbished guns at a discount, traded some guns for others, and bought used pumps for cheap and rebuilt them.

The result is a thoroughly modern system. Each TechnoAlpin gun has its own weather station, which senses air temperature and relative humidity, so every individual gun adjusts itself precisely for optimal output. Onboard electronic components, including the LED control panel, are heated to protect against frost.

The entire network of automated guns at the three Schmitz Brothers ski areas is controlled from a weatherized, Android-based tablet with LTE Wi-Fi coverage and TechnoAlpin’s ATASSplus app. The app not only tracks gun performance, but also allows real-time monitoring of water and energy use. That helps cut down on waste. 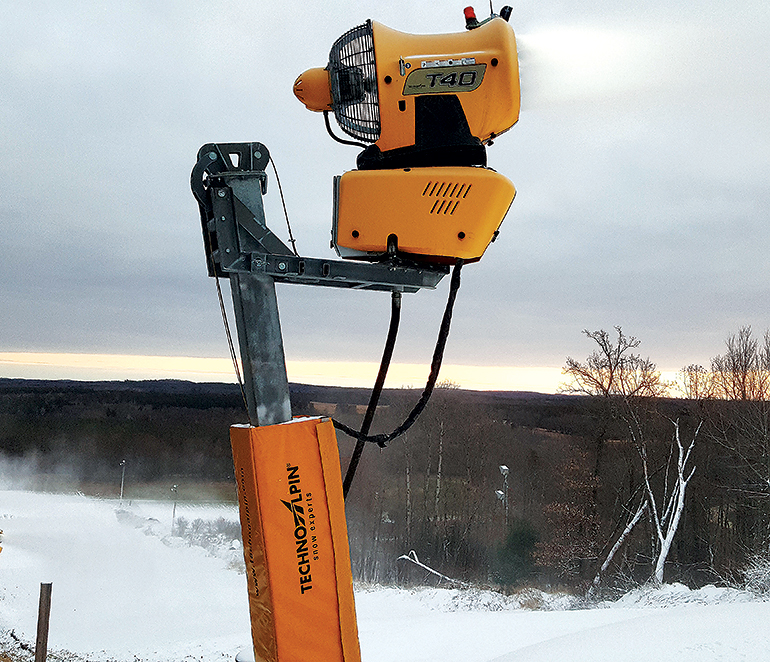 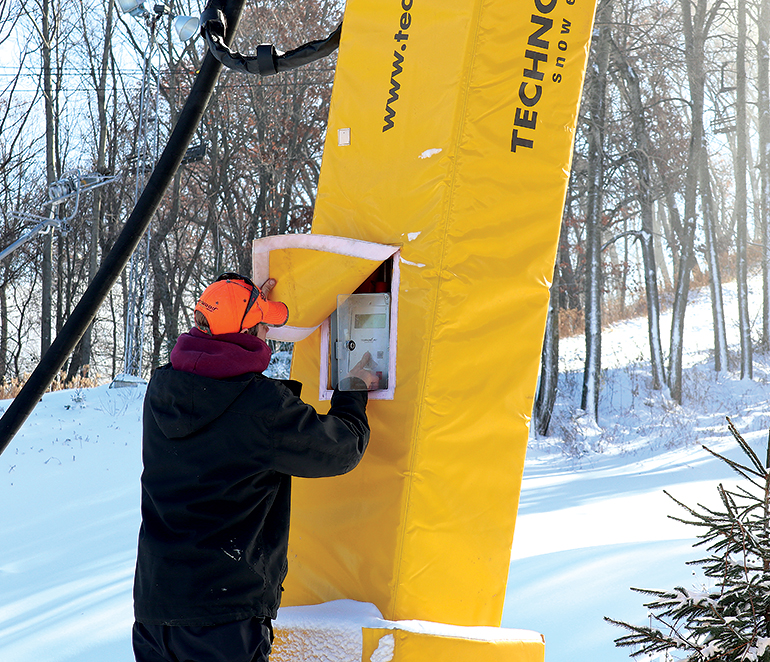 TechnoAlpin T40 fan guns are controlled from an Android-based tablet with LTE Wi-Fi and Techno- Alpin’s ATASSplus app, or an onboard LED panel.

When adjustments to the system are needed, they can be made with the push of a button, not a snowmobile ride to the gun itself. Water valves can be opened and closed via the app. If power is lost, the valves are shut automatically to prevent damage from freezing. A complete system startup, which used to take three hours to complete, now can be done in about a half-hour, says Schmitz.

The annual subscription fee for the app is worth the added expense, he adds. Two people can now maintain a system that previously took a half-dozen workers, and those who are on the job now are “literally babysitting and making sure everything is running,” Schmitz says.

“The app fires up and shuts down the system, regulates the quantity of snow, and sends me a push notification when there’s a problem,” he says. “If there’s underpressure in a gun, I know it immediately. The snowmaking manager sitting at home knows there’s a problem before anyone even calls, and the app tells you before it becomes a crisis.”

The components of this system,

including the onboard electronics, aren’t cheap, Schmitz says. However, his experience has been that “less stuff breaks and freezes” with the computer in control of the system. “You take the human error out of it,” he explains. “When things break, it’s usually because someone made a mistake.” Cutting down on the amount of time workers interact directly with the equipment on-hill also reduces workplace injuries, he adds. 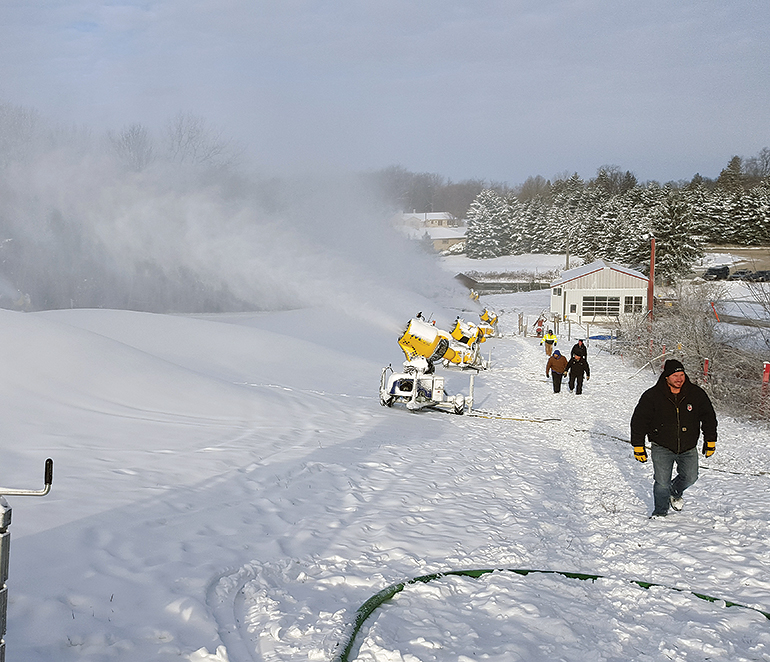 There’s no shortage of automated snowmaking systems on the market. Most major manufacturers—including SMI, DemacLenko, Sufag, HKD, Ratnik, and Snow Logic—offer automated solutions. But U.S. and Canadian ski areas have been slow to adopt the new technology. “The rest of the world is 10 steps ahead of us,” says Peter Britz, Midwest TechnoAlpin USA sales manager, who worked with the Schmitz family on its upgrades.

Why such a lag?

Expense certainly is one reason. Since each automated gun costs tens of thousands of dollars, replacing less-efficient but still functional manual guns can be a daunting proposition, especially for areas with hundreds of snow guns or limited budgets.

That's penny-wise and pound-foolish, Britz believes. “There’s a 30 to 40 percent increase in cost [compared to manual guns], but that’s relatively small compared to the return on investment,” he claims. Ski areas can expect to recoup their investment in three to five years through reduced labor, energy consumption, and water use, he says. Less on-mountain work can also reduce injuries and costly claims.

And that doesn't take into account the financial benefits from a longer and more predictable operating season.

There’s also a false perception, among some operators, that converting from manual to automated systems is an all-or-nothing proposition. “You can do it in phases—it doesn’t have to be done overnight,” says Schmitz. Britz agrees: “There’s a big misconception that if you go automatic, you have to do it everywhere or put communication wires all over your hill. You can try two or three guns and see what you think,” he says.

Automated systems also require a different skill set. “Snowmaking has always been a very physical job, but you also need a guy with some IT experience,” says Schmitz, who notes that repairs just as likely mean replacing a motherboard as fixing a balky valve.

Longstanding attitudes about the “art” of snowmaking can conflict with this change in mindset. “There’s still a bias. There are guys who have been in the industry forever, who are good with wrenches and are still using a flip phone. That’s clearly a big hurdle for us,” says Britz.

“The biggest challenge is that this is much more technically advanced machinery than manual equipment,” he adds. “It takes more knowledge to run—not more maintenance, but it’s just different.”

Areas are beginning to take the plunge. Park City is one of the few big ski areas that have seriously moved into automation. Some smaller operators have made the leap, such as Liberty Mountain and Blue Mountain in Pennsylvania, and more recently Snowshoe in West Virginia. “If you come to me with an open mind, I don’t have to sell these guns, they sell themselves,” says Britz.

Schmitz thinks it’s only a matter of time before the industry standard in Europe becomes commonplace in North America, too. “Lots of areas have old-school snowmakers who say, ‘I can keep up with the conditions,’" says Schmitz. "But the reality is that nobody can adjust as well as a computer.”