Cleanliness and good fits are critical to the life of your bearings. 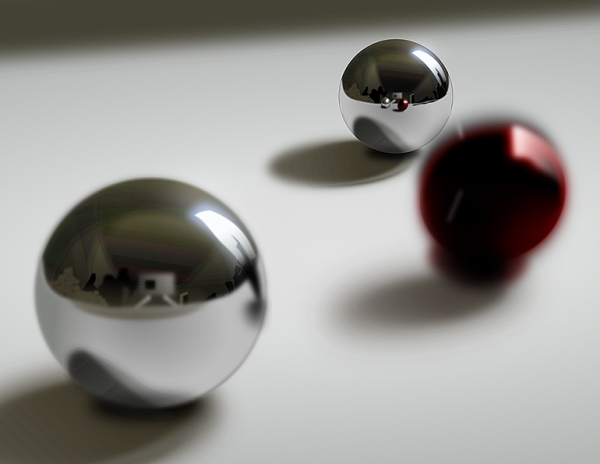 Figure 1: Here are cross-section views of three of the more common bearings. From top to bottom, they are a deep-groove ball bearing, an angular contact bearing, and a tapered roller bearing. There are many other “rolling element” bearing designs, but they all share some common features. Bearings play a key role in many of our machines, and some require more attention than others. For example, almost anyone can replace slow moving and lightly loaded ball or roller bearings, such as the ones on the sheave wheels of a 1960s double chair. These bearings last a good eight years or so (or longer if fit well) because they were designed when the safety factors were much higher and the allowable bearing loads lower. But replacing a motor bearing or reducer bearing in that lift is a different story. The loads are higher, and the tolerances tighter. The person responsible for that should understand both how ball and roller bearings really operate and the need for careful installation. That especially includes understanding why those higher-speed and more heavily loaded bearings need the proper fit dimensions.

Bearings Go Way Back
The basic idea of ball and roller bearings has been around for thousands of years. Ancient people moved huge stones on rollers made from tree trunks. Some sort of rolling-element bearings have been used on water wheels and at the base of windmill posts for centuries. Modern bearings are a recent development, though: It wasn’t until 1798 that a patent for a ball bearing was issued to a Welsh inventor.

Those early metal bearings had a serious problem with uniform diameters. They were typically machined with a tolerance range—how far a true measurement ranges from what was intended—of +/- about 0.001 in. or 0.002 in. (0.025 mm to 0.050 mm), and that wasn’t close enough to evenly distribute the load across the rolling members. As a result, they were unreliable and failed relatively quickly.

In 1883, Friedrich Fischer, the son of the inventor of the pedal bicycle, invented a machine that ground those balls to a tolerance of less than 0.00001 inches, and that increased bearing lifespan tremendously. To put the needed accuracy into perspective, the typical human hair has a diameter of 0.001 in. to 0.002 inches. So, those element diameters were being controlled to 1/100th of the thickness of a human hair—nearly 140 years ago.

Now as then, precise tolerances on making bearing balls and rollers is important because those incredibly close dimensions are critical for the even distribution of stresses across several elements during operation. Installations with incorrect component dimensions, or shaft and housing fits that are too loose or too tight, inevitably result in shortened lives of rolling elements.

Parts and Pieces
Figure 2 (next page) shows a side view of a rolling element (ball or roller) bearing. The rings and elements are almost always made from hardened steel. Note: The term “ring” is what bearing manufacturers are now calling what we in North America have always called the inner and outer “races.”

For relatively low-speed applications where there aren’t a lot of forces on the rolling elements, such as a wheel on a car or light truck, inexpensive plastic cages can be used. But for machines where the rotating speed might change during a single revolution, such as a piston-type compressor, a stronger steel or bronze cage is needed. Bronze cages will often be used in applications where there might be poor lubrication.

The Load Zone
Now that we know the parts and pieces, let’s discuss what actually happens during a bearing rotation.

Three thoughts on the load zone:

With most bearings, such as the ones used in a typical motor, the load zone is on the lower third or so of the outer ring, due to gravity. But in other applications where the major force isn’t gravity, like a belt-driven fan, the load zone might be on the side or even the upper portion of the bearing.

There are some angular contact ball bearings and tapered roller bearings that have substantial axial forces, and their positions are carefully adjusted so the load zone exists all the way around the bearing, and the forces on the cage are reduced. 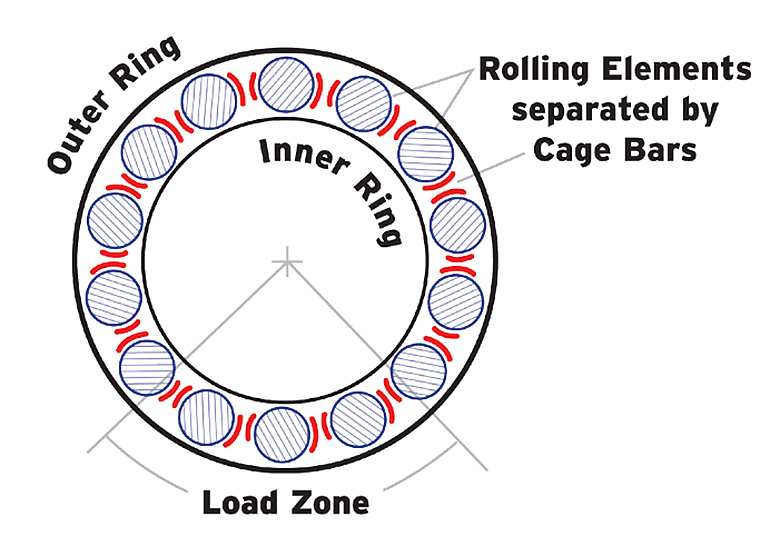 Lubricant Action
In addition to the reversing cage forces, an amazing thing that happens in the load zone is the action of the lubricant. Whether the bearing is grease or oil lubricated, the actual lubrication at the point of contact is from oil—with grease lubrication, the oil slowly wicks out of the grease thickener.

Before reaching the contact between the element and the ring, the oil is an easy-flowing liquid. But at the point of contact, where the pressure may be as high as 300,000 psi, the viscosity increases more than 10,000 times to where the oil film cushions between the moving pieces and actually deforms the hardened steel. Then the element rolls on, the pressure drops, and the oil goes back to being an easy-flowing liquid. The thickness of the film in that contact area is generally in the range of 0.00002 to 0.00004 inches. There is lots of data that shows bearing life is a function of the film thickness: the thicker the film, the longer the life.

If the oil isn’t clean, particles smaller than we can see can get caught between the elements and the rings and damage the surfaces, increasing the fatigue stresses and shortening the life of the bearing. Water contamination is even worse because, under those incredibly high pressures, the water will vaporize— and that destroys the lubricant film. Data shows that both 0.001-inch diameter particles and one ounce of water in eight gallons of oil can each reduce bearing life by a factor of five.

Lubrication is absolutely critical. And as a bearing gets hotter, the lubricant’s job gets more and more difficult.

Feel the Heat
So, we have this loaded bearing whizzing around with the rolling elements alternately being pushed by and then pushing the cage, and it’s operating at extremely high contact pressures. This, of course, generates heat. We often put our hands on machines or pillow blocks to see how hot the bearings are running.

Question: What happens if the mechanic, whether working on a lift or a vehicle, doesn’t understand the need for a good fit and installs the replacement bearing loose in a housing?

Answer: The heat transfer is poor and the temperature inside the bearing goes up. When that happens, it creates additional fatigue stresses and reduces the viscosity of the oil. And when the viscosity goes down, the oil film goes down, and the bearing life gets shorter.

You might think that a slow-rotating bearing that doesn’t generate a lot of heat—whether it’s on a bullwheel or a truck axle—won’t have a problem with loose outer ring fits. But, especially for ball bearings, that isn’t true. In the load zone, the forces are designed to be distributed from the inner ring, across several elements, then absorbed by the outer ring that is reinforced by the housing fit. If that fit isn’t tight enough, the ring flexes more than it should, and will crack. We have never seen a cracked ring where the fit is correct.