The making of a World Cup race course. 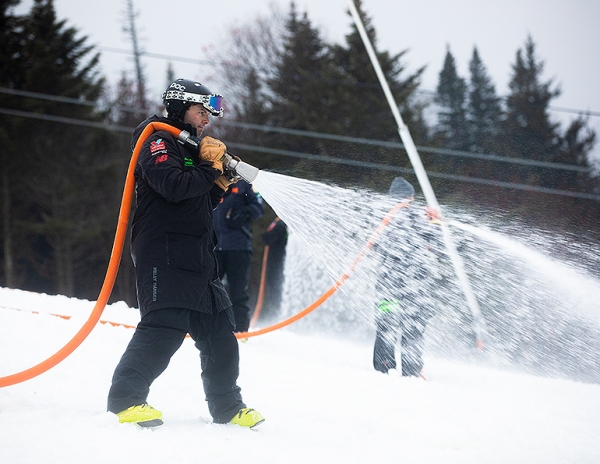 For the last four years, the snowmaking crew at Killington, Vt., has begun a process in October that most snowmakers try to avoid: Laying out a deep blanket of the wettest, densest snow imaginable, aiming for a surface as close to glass-hard ice as possible.

There is a purpose in Killington’s perversity, of course. The aim is to ready one of the resort’s signature trails, Superstar, for women’s World Cup racing over Thanksgiving weekend. The objective: a slick, bulletproof surface that remains as consistent as possible from first racer to last. Without razor-sharp World Cup ski edges, the average skier would be in misery on Superstar in its World Cup incarnation, sliding sideways—even accelerating sideways—from top to bottom, cursing all the way.

Four-Step Process
According to Killington director of mountain operations Jeff Temple, there are four basic steps in the recipe for World Cup snow: making unusually dense, wet snow to start; special grooming to not only compress the snow but also add terrain features for extra racing challenge; hosing down the snow with water; and finally injecting the snow with additional water. The process produces a deep layer of iciness several inches thick to withstand the repeated incisions inflicted by the sharpest ski edges in the world.

Making snow early in the season is, of course, a challenge that any snowmaker can relate to. But Killington faces the extra stress of a hard deadline—Thanksgiving weekend—and meeting the exacting standards of the FIS, the World Cup’s governing body. Most resorts can get away with opening a day or two later than projected or opening with a surface that’s a bit thinner than optimal. Not Killington, at least not for the World Cup. If Killington fails to earn “positive snow control” from the FIS a few days before the races, a lot of effort and investment has gone to waste.

To make sure Killington could withstand the pressure, Temple went back to the record books before the first Killington World Cup in 2016, and charted fall temperature patterns for the previous 15 years. Armed with that data, Temple and his team designed a plan to maximize likely temperature opportunities for the 120 to 130 production hours necessary to pump out the 54 acre feet required to cover the World Cup course.

“We never would have done it if Jeff hadn’t compiled all the historical data,” says Herwig Demschar, senior vice president for Powdr, Killington’s parent company. Demschar has headed Killington’s World Cup organizing efforts since Powdr first came up with the idea of hosting an event in Vermont about six years ago. Having been directly or indirectly involved with World Cup racing since the early 1980s, Demschar knows what it takes to put on this kind of event.

Step 1: Maximum Firepower
For starters, the resort beefed up its already muscular snowmaking system on the trail. The snow gun arsenal on the 3,200-foot-long course was enlarged to 120 guns—a mix of Ratnik and Snowlogic guns along with Killington’s custom-made K3000 guns. On any other Killington trail, the normal spacing between snow guns is 50 to 75 feet. On Superstar, some guns are as close as 20 feet apart. Additional water and compressed air were also brought to bear.

The total snowmaking and grooming costs for the race trail, and for neighboring Skyelark, which serves as a training slope: between $300,000 and $400,000, according to Demschar, although it is difficult to isolate the World Cup efforts from early-season recreational snowmaking. (Killington typically opens for recreational skiing in late October.)

For normal snowmaking operations, Killington waits for temps to drop to 27 degrees wet bulb before firing up the guns. But on the World Cup course, Temple and his crew not only had the horsepower needed to start at warmer temperatures, producing wet snow fit right into the game plan. In fact, Temple concedes, the desired air/water mix for World Cup snow can be harder to achieve at colder, more typical snowmaking temperatures. In the weeks before this year’s races, Killington temperatures frequently dipped below 20 degrees.

Tom Johnston, alpine technical advisor for U.S. Ski and Snowboard, oversees the final stages of the course prep, along with other FIS representatives. Sometimes they measure density by inserting a hydrometer into the snow, he says, and there are FIS guidelines to suggest appropriate ranges of water content. But acceptable densities vary from venue to venue, for men’s and women’s races, and from one discipline to another. While impenetrable hardness is usually the objective for slalom and giant slalom races, “we’re not interested in crazy hard ice” for downhill or super-G events, says Johnston.

Step 2: Grooming and Shaping
Once snowmaking was completed, about 10 days before this year’s race weekend, Johnston brought in grooming experts, specifically skilled at shaping World Cup courses, from PistenBully and PRINOTH. They pushed snow around to add “terrain”—rolls and pitches that would provide additional racing challenges—and built start and finish zones. In concept, it’s similar to shaping a terrain park.

Steps 3 and 4: Making Ice
After the groomers were done, the next step was to make already hard snow even harder. First, crews hosed water onto the snow, but that was literally just a surface treatment. Temple and crew then enlisted volunteers to walk down the slope with so-called injection bars and fire tiny streams of water about three inches deep into the snow. That was followed by a final grooming pass. And there you have it—snow so besotted with frozen water that only a World Cup racer could love it.

A Short, Happy History
Killington has been lucky. Whatever patterns Temple’s historical data might indicate, temperatures and weather for course preparation and for the races themselves have been close to ideal in the first four years. Drawing up to 40,000 race fans for the weekend, the Killington event is considered one of the best-attended, best-organized events on the World Cup circuit, and favorable weather has been a big contributor to that success.

But surely in Temple’s data are years of extended early-season warmth or otherwise mischievous weather antics. World Cup races are regularly canceled, postponed, or relocated because of poor snow conditions. Because Killington is the only U.S. venue on the women’s schedule, rescheduling at Killington (or even elsewhere in the U.S.) is out of the question. That only increases the pressure on Killington’s snowmakers.

Post-Race Recovery
Once the World Cup is gone, two of Killington’s bread-and-butter trails are essentially unskiable skating rinks tilted at a 30- to 50-percent angle. What does it take to break that down and reinvent Superstar and Skyelark as trails that recreational skiers might enjoy?

The process starts almost the minute slalom racing ends on Sunday afternoon. By Sunday evening, says Temple, winch cats begin the job of churning up the rock-hard surface into chunks. That’s followed almost immediately with snowmaking—wetter at first to facilitate bonding, and gradually becoming drier and more skier-friendly. “It’s a very similar process to recovering from a rain event or rebuilding a tired trail,” says Temple, basically a matter of “putting air back in the snow.”

Temple has discovered that, despite the extraordinarily high water content, the World Cup leftovers aren’t “a block of ice to the grass.” The snow is still malleable enough, especially deep in the snowpack, to be broken up, moved around, mixed with new snow, and turned into a pleasant skiing surface.

The dense base provided by the World Cup preparations provides an ancillary benefit. Killington relies on Superstar for skiing until Memorial Day weekend, and the super-dense World Cup snow takes a long time to succumb to spring warmth. Slush-bumping shirt-sleeve skiers in May have the World Cup in November to thank.