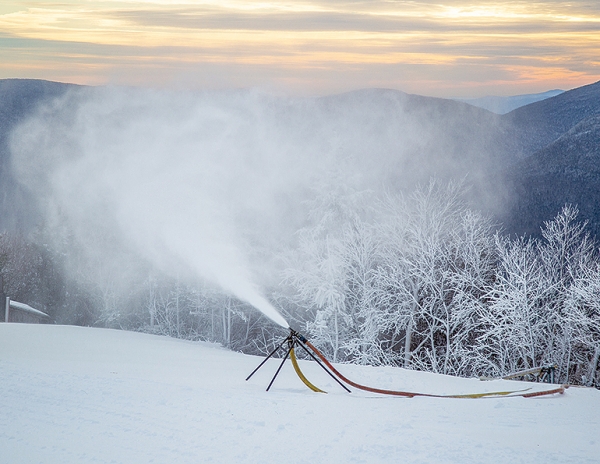 To learn more about how snowmaking upgrade decisions are made, as well as how new technology can meet an area’s objectives, SAM talked with snowmakers and mountain-ops folks at four North American ski areas that have made recent installations. These areas vary in size, region, climate, and budget, and thus offer a diverse perspective on making a jump into the bold new world of 21st-century snowmaking.

According to snow operations manager Mike Childress, Mountain High management determined about four years ago that it needed to get out of the diesel-burning business. To achieve that goal, the resort invested $500,000 to convert from the resort’s energy-intensive snowmaking system, which relied heavily on less efficient guns, to guns that could operate at as low as 25 cfm. The obvious effects, says Childress: less diesel consumed, and huge energy savings.

The resort began the conversion with “two seasons of testing products from pretty much all the major hitters,” says Childress. Such was necessary to determine what would work best in Mountain High’s climate and configuration, with moisture from the Pacific Ocean to the west meeting the dry air of the Mojave to the east. With a relatively mild climate, the snowmaking windows are small, says Childress. “We rarely see wet bulbs in the teens,” he notes. 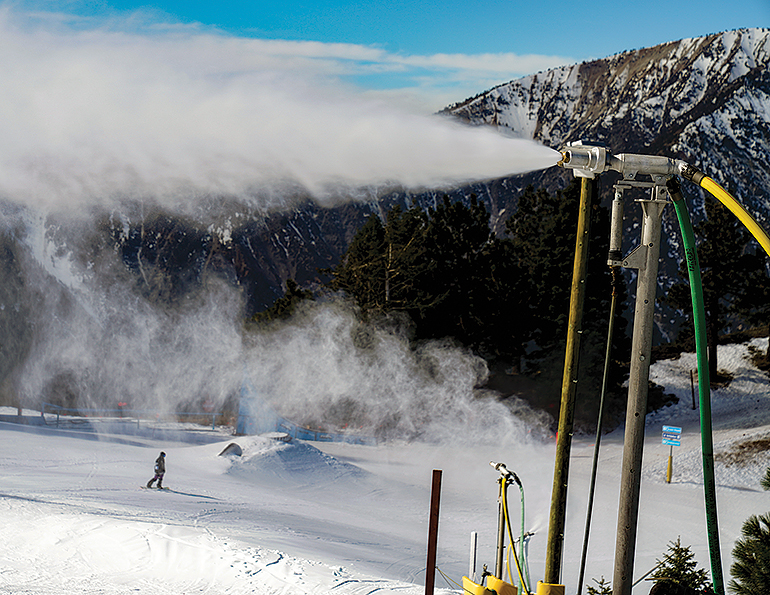 After completing the testing process, Mountain High began implementation for the 2018-19 season with a mix of mid-energy Ratnik Baby Snow Giant X-2s and low-e TechnoAlpin V3 30-foot lances, supplemented by seven TechnoAlpin and SMI fan guns. While the Ratniks might consume more energy than low-e guns—using 50 to 300 cfm—they performed best on the upper mountain, says Childress, because they operate more effectively where water pressure, supplied by two mountaintop reservoirs, is lower.

Lower on the mountain where the water pressure is higher, the tall TechnoAlpin sticks were more effective, and throw out a high mist that Childress says has resulted in improved snow quality, validated by positive customer feedback.

The new technology enabled Mountain High to open more terrain faster, because it can run many more guns simultaneously while using less air. 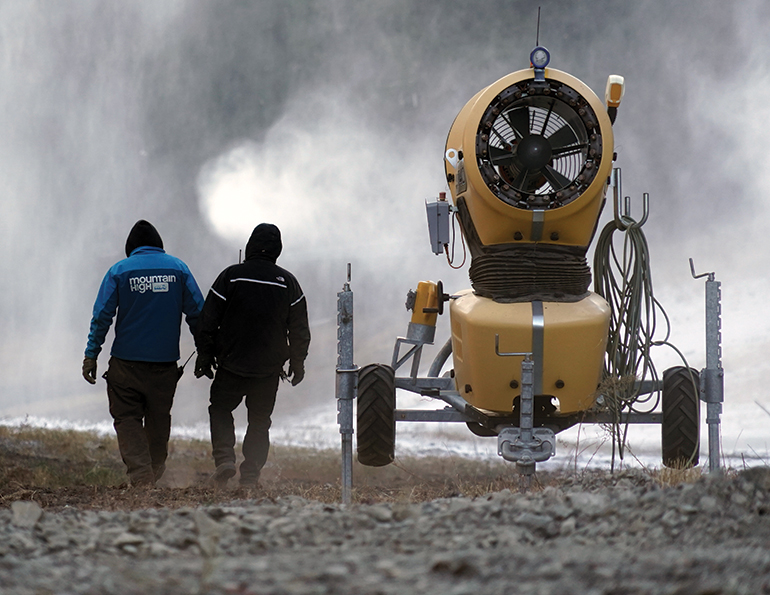 The big payoff, however, has been in energy-related savings. To operate the previous-generation snowmaking system, Mountain High needed to rent as many as 16 portable diesel compressors to boost the output of in-house compressors. The new system, able to run on about 40,000 cfm at full bore, can now operate solely on in-house compressors, resulting in a realized annual savings of about $200,000 in reduced diesel costs, rental costs, and labor. Overall energy savings, says Childress, are leading to a lightning-fast payback. He estimates a return on investment within just a season or two.

Next season, a brand-new 300-room Club Med resort hotel will open slopeside at Le Massif. According to the terms of the contract between the resort and Club Med, Le Massif must provide a certain number of skiable days on new beginner terrain accessible from the hotel, as well as on a top-to-bottom run. That applies extra pressure on the resort’s snowmaking team to get terrain open early in the season, especially at more challenging lower-mountain temperatures. 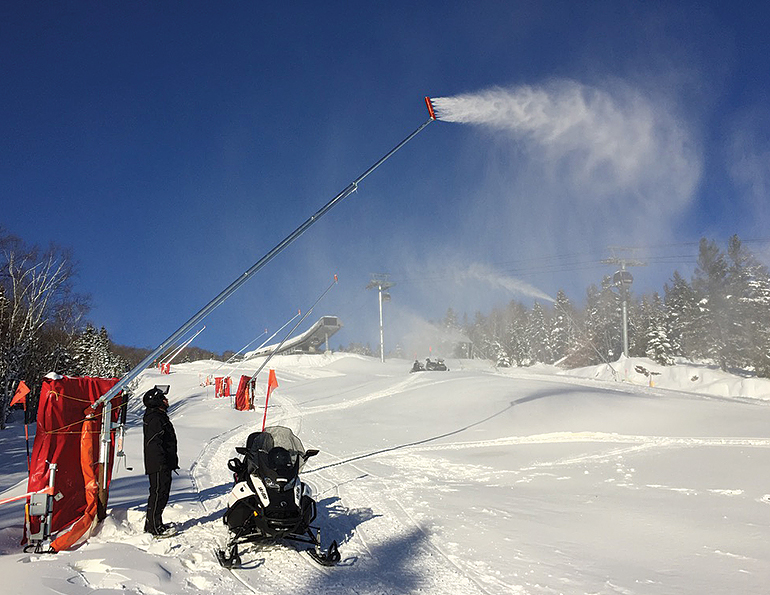 Given the overall configuration of Le Massif’s snowmaking system, the resort is actually hit with a double whammy, temperature-wise. The main water reservoir is at the top of the mountain, where temperatures are typically much colder than at the base along the banks of the St. Lawrence River. “There are two completely different weather [zones],” says Michael Lachance, vice president of engineering for HKD, the snowmaking company that assisted with the Le Massif installation.

Given the mountaintop reservoir, the main difficulty Le Massif encounters, says operations supervisor Nicholas Davis, is that the water travels a long way from the top of the mountain to the bottom. That long exposure to cold temperatures means “we have problems with freezing,” says Davis. The water can arrive at the gun nozzles at or near 32 degrees Fahrenheit.

Working with Lachance, Davis and his team resolved freezing issues by using two tactics. They installed heaters in HKD Klik hydrants—about 30 percent of the hydrants installed, according to Davis—and they mixed in HKD Phazer stick guns with an arsenal of HKD Impulses. Normally, the Phazers, with fewer nozzles, are used for narrow-trail applications. But with the advantage over the Impulses of having a directional flow and additional circulation at the head, according to Lachance, the Phazers are less susceptible to freezing issues.

Another reason to go with the Klik hydrants, says Davis, is to enable the possibility of automation in the future. The Klik hydrants now in operation at Le Massif are manual, but with “80 percent of the advantages of automation,” says Lachance. “They can be turned on manually as quickly as you can move from hydrant to hydrant.”

The upgrade to automation, should Le Massif implement it, would be relatively straightforward, involving the installation of new actuators, communications cables, and control software—but not a complete system overhaul.

So when the resort embarked on a four-year plan—including pre-installation testing—to revamp its snowmaking system, water filtration needed to be a key component. Another critical component of the plan: budgetary constraints. As Waterville Valley general manager Tim Smith puts it, “We were looking to get the most bang for our buck. [An installation] with the fastest payback would be the easiest to justify.” 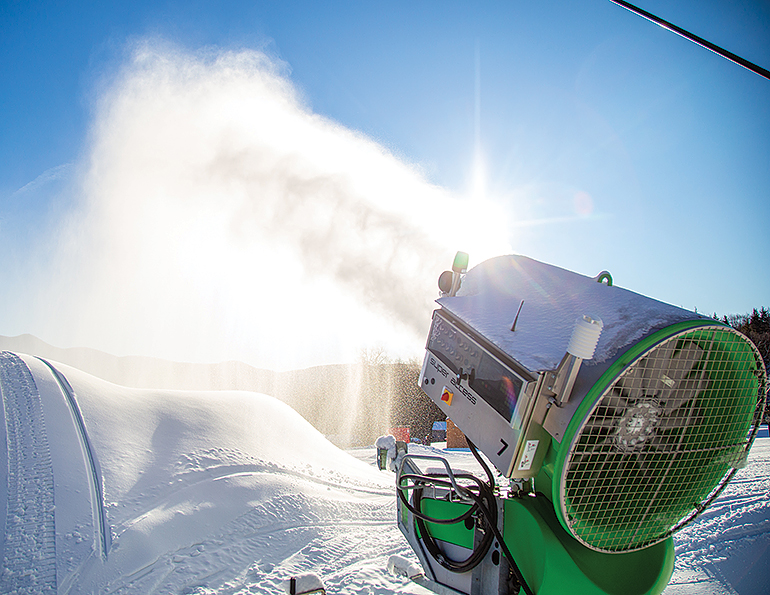 After a detailed cost analysis, the resort turned to MND, which came in with an arsenal of more than 400 Folk stick guns and 16 Super Access fan guns, some on sleds and some tower-mounted on Gunlifter towers, which allow fans to be raised and lowered for varying throws and easier gun maintenance.

The new, low-e fleet will produce such significant energy savings, says Smith, that the resort could realize an ROI in less than two years. In addition to the MND Snow fleet, the resort also has several mid-energy Ratnik Baby Snow Giant X-2s, which Smith says work particularly well in fighting the wind.

But effective water filtration needed to be incorporated to make the new system operate smoothly and for the investment to make sense. To address the issue, MND installed a semi-automated, self-cleaning, 200-micron filtering system in the main pumphouse capable of pushing through 3,900 gallons per minute. Bristow says the partial integration of automation in the pumphouse means “your water can be ready to go when you need it.” 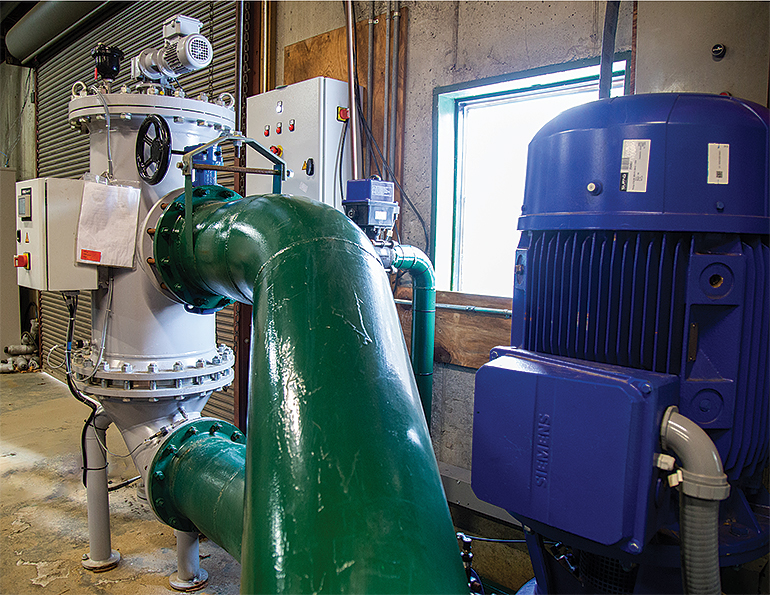 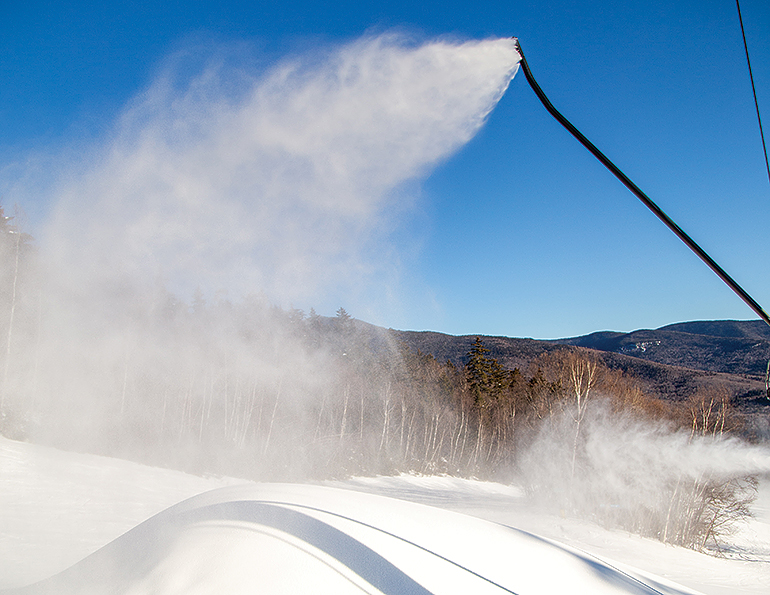 Top to bottom: Water filtration was a key concern for Waterville Valley, so MND installed a semi-automated, self-cleaning 200-micron filtering system. Additional filters between the MND Folk gun hydrants and gun bases allow for greater clarity at the nozzle.

According to Smith, the Folk guns, designed to run with pure artesian water typically found at European resorts, needed great clarity once water arrived at the gun nozzles. The pumphouse filtration alone wouldn’t be sufficient, because water passing through the existing on-hill pipes picks up residue on its way to the guns. The solution? Secondary, in-line filters made by HTM—easily flushed out by reversing the water flow—were installed between hydrants and gun bases. MND also modified the valve blocks between hydrants and guns to match two-inch U.S. pipe standards.

Early-season anxiety is an occupational hazard in the snowsports industry. At many resorts, missing a Thanksgiving opening is a major hit to the bottom line. A similar hit can be felt when a resort’s only terrain open on Thanksgiving is limited to advanced skiers and riders. And if that resort is as large as Vail, with a local economy almost completely dependent on the resort’s success, the hit can be crushing. 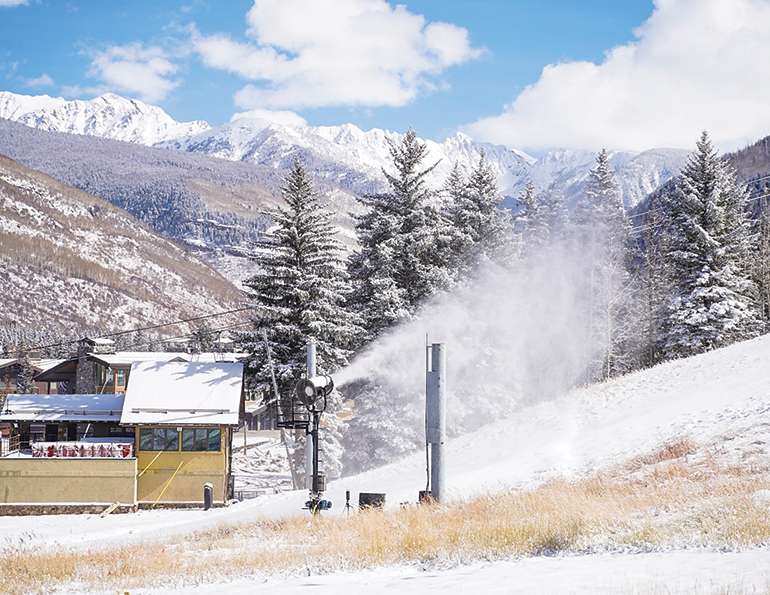 So, when Vail missed a Thanksgiving opening in 2016 due to an unusually warm fall, the writing was on the wall: Something needed to be done to ensure that wouldn’t happen again.

According to Greg Johnson, Vail’s VP of mountain operations, big temperature swings in October and November are common, and the resort needed to come up with a snowmaking strategy to best take advantage of cold spells in between the warmer weather. And in order to open with terrain suitable for all ability levels rather than advanced terrain only, the strategy needed to be put in place on a different part of the mountain.

After a summer 2019 installation project that Johnson calls “massive,” that strategy has played out on two fronts: moving early-season snowmaking efforts to easier terrain higher on the mountain—where guests can be uploaded and downloaded via Gondola One—to take advantage of lower temperatures, and incorporating lots of automation.

Vail invested in 188 SMI Super Polecat fan guns, which Johnson liked for their high horsepower and ability to deliver long throws on Vail’s wide trails. A large part of the Super Polecat fleet was focused on two trails at Mid-Vail—mid- to upper-mountain terrain above 10,000 feet—with what Johnson calls “aggressive spacing [about 120 feet apart] to maximize production windows.” SMI SmartSnow software runs the automated part of the system. 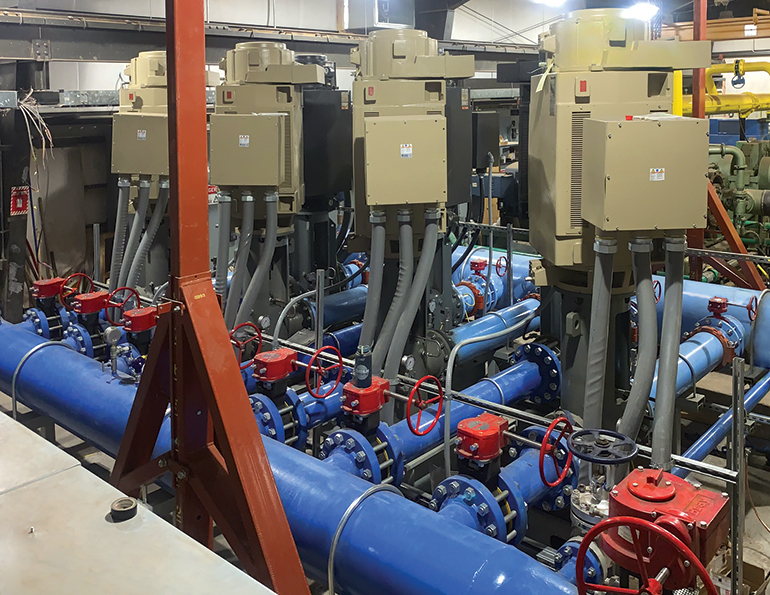 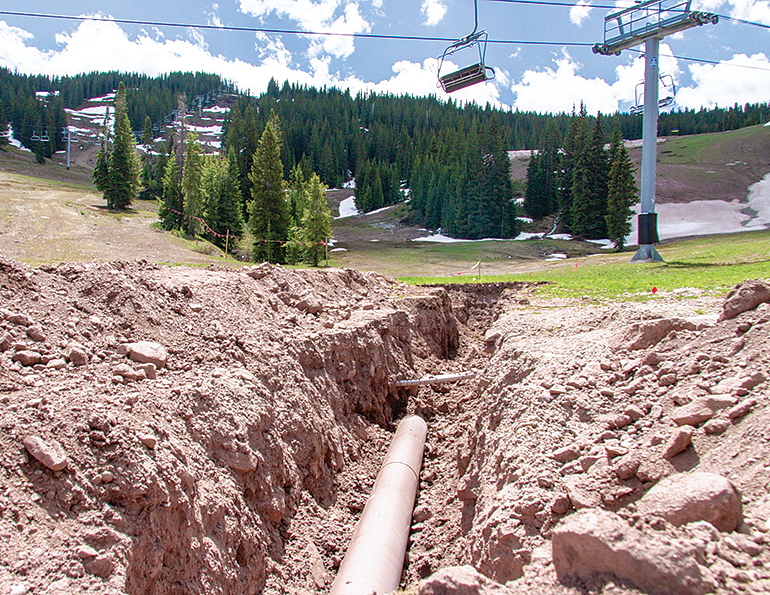 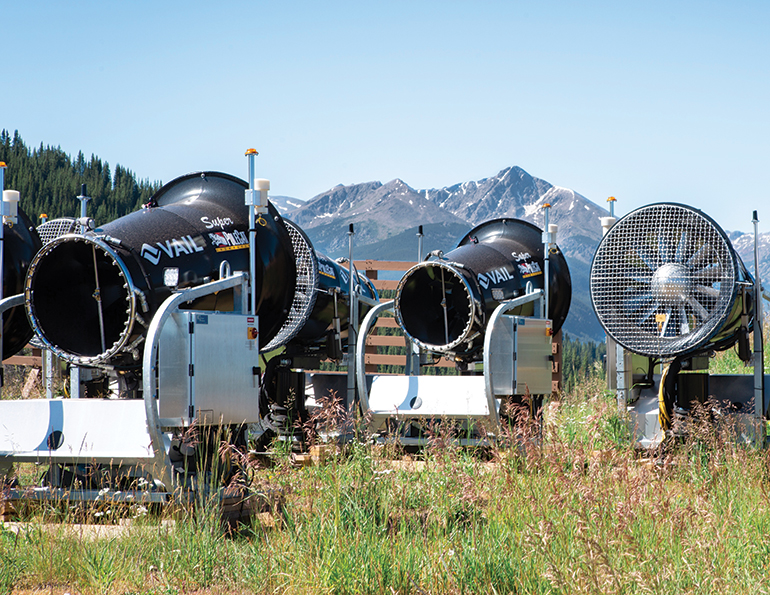 To deliver water to that new arsenal, the resort installed 20-inch pipe from a mountaintop reservoir, part of 101,000 feet of new piping that Johnson says allowed Vail to “triple if not quadruple our water capacity.” That setup, says Johnson, enables Vail to now go from bare ground to skiable snow on the Mid-Vail terrain within four days. This winter, Vail was comfortably open for skiing and riding on Nov. 15.

The Mid-Vail installation was part of a larger overhaul of the snowmaking system that included more than 200 HKD four-step Impulse and Phazer stick guns, HKD Klik hydrants, the aforementioned pipe upgrade, two rebuilt pump stations, and one new pump station. To power the fans and automation, especially at Mid-Vail, additional electrical lines were necessary, although Johnson says that the pre-existing availability of electricity on the mountain made the installation of power lines, within the huge scope of the overall project, relatively easy.

Johnson concedes that there are very good snowmaking products available from many equipment manufacturers. So why did Vail choose HKD and SMI? Some specific features were appealing. For example, Johnson liked the directional precision of HKD Phazers on swing-arm mounts for covering narrow roads, thus reducing wasted snow blown off-trail. He also liked the operational simplicity of the Klik hydrants.

Ultimately, though, it came down to “continuity,” says Johnson. Prior to the upgrade, Vail had already relied on SMI and HKD equipment. That meant the Vail snowmaking team needed little retraining or adjustment in adapting quickly to the new hardware and software.

With today’s major equipment suppliers producing a broad array of new technologies—from guns to infrastructure to software—resort snowmakers have no shortage of quality choices when they decide to make a system upgrade. This advanced technology means that snowmakers can choose guns that perform best for their area, region, terrain, plumbing, and weather. What works great on one trail may not be ideal on another, but that’s the beauty of having options.

Perusing tech manuals and talking with snowmaking company reps is a good start in sorting things out, but on-site testing, and comparisons of test results, is key to assuring that any eventual snowmaking installation meets intended objectives. And that’s something that takes time—more likely measured in years rather than days or months—to test various equipment under various conditions.