A look back at a promising season that fell victim to the coronavirus shutdown. 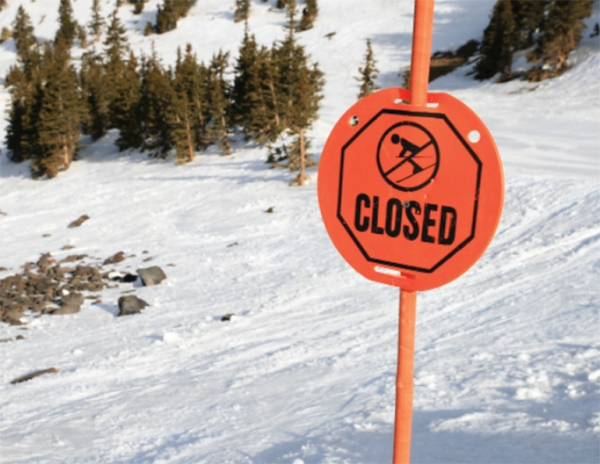 The coronavirus pandemic brought what had been shaping up as an above average ski season to a sudden, unexpected, and confusing finish. In mid-March, ski resorts abruptly canceled events, shut down lifts, and finally closed altogether in an effort to try to stay ahead of the virus. By March 26, the last downhill resort open, Lookout Pass, Mont., closed its doors, bringing the season to an early end.

Before the shutdowns began, the Northwest and Rockies were enjoying another huge snow year and overflowing crowds. East Coast resorts, despite a lack of natural snow, were reporting average and above average seasons. At press time it was unclear how much the virus and cancellations, travel restrictions, and early shutdowns will affect visit totals for the season. Here’s what we learned by late March.

East: What Happened to Winter?

In the East, winter was pretty much a no-show for southern areas, but made more of an appearance farther north. Thanks to snowmaking, however, many resorts throughout the region reported record days over MLK weekend and Presidents’ Day week.

Ski Areas of New York president Scott Brandi said the snow line was between Albany and Glens Falls. “North of that, there was snowpack,” he said. “South of that—places like Hunter—there was no snow in the woods. It’s been like that all season. But it hasn’t really affected weekend and holiday business. People finally understand they don’t have to see snow in their backyards to have snow in the north country. Numbers have been strong up and down the state.”

He termed it a “decent” season prior to the shutdown, with most resorts “above budget.”

Greg Sweetser, executive director of Ski Maine, said the snow line ran along the coast. “Inland regions and mountains had pretty good snowfall, close to normal in some cases,” he said. “Coastal regions struggled to see snow on the ground. But we’re making progress educating the public about snowmaking. We had three or four at-capacity weekends.”

He said mild temps in January also brought people out. “All night programs, school programs took place. January can be a pretty volatile month, so when we can have a strong January, that’s great.”

Like Brandi,  Sweetser predicted a strong season—pre-coronavirus, that is.

Vermont and New Hampshire were also on pace for good seasons, thanks to some just-in-time snow storms and of course, snowmaking.

“Christmas was not so favorable, but it turned out OK just because it was so long [two weeks instead of the usual one],” said Shannon Dunfey-Ball, communications director at Ski NH. “For MLK and Presidents’ week, Mother Nature brought snow just when we needed it.”

Farther south, snowfall was sparse—just 9 inches in January and February at Wachusett, Mass., and 30 inches total for the season at Cataloochee, N.C.

Snowmaking again was the story. “I was pleased with our customer response even with the lack of natural snow and up and down weather,” said Cataloochee GM Chris Bates.

Despite a lackluster Christmas/New Year’s, Midwest resorts rebounded in January and February, and northern resorts especially were on a stronger pace than the last couple of years, said Midwest Ski Areas Association president Amy Reents.

“Wisconsin, northern Michigan, and Minnesota had strong seasons, good snowfall and mild temps, but not too warm,” Reents said. “Southern parts of the Midwest had a slower start, but a good January and February. They’ve really invested in snowmaking, and can make a lot of snow as soon as the weather changes.”

The storyline in much of the West, at least pre-coronavirus, was snow, multi-area passes and huge crowds—sometimes too big. The exception was California, where snowfall was just half of normal.

Mike Reitzell, president of Ski California, said snow “really didn’t happen anywhere in the state. Snow and visits go hand in hand, so it’s bound to have an impact on total visits.”

Following sparse snow over the holidays in the Pacific Northwest, “winter came in like a lion,” said John Burton, director of marketing and PR at Timberline Lodge, Ore. “Our historical snowpack through March 1 was up 25 percent.”

Burton said skier visits through February were up 5 percent over last year (a strong year). Ticket yield was also up, as were early season-pass sales for next year.

“The Northwest is really hot,” added Jordan Elliott, president of PNSAA. “There were full parking lots everywhere, even at areas not on shared passes.”

Actually, overcrowding, multi-area passes, and not enough parking were getting to be sore subjects in the West. Following three weekends of great snow, traffic jams, and turned-away skiers, Crystal Mountain, Wash., took a bold step and stopped selling walk-up day tickets on weekends and holidays. Instead, Crystal offered only a limited number of day tickets for online advance purchase. Many cited the Ikon Pass, which Crystal joined in October 2018, for the overcrowding.

In Colorado, where above average snowfall caused two-hour lift lines at some resorts in February, Arapahoe Basin took a different approach to alleviate overcrowding—it dropped out of the Epic Pass, opting for the Ikon and Mountain Collective groups instead.

“We wanted to reduce crowding by 20 percent over last season, and by reducing the crowding, we wanted to offer a much higher quality guest experience,” explained Alan Henceroth, COO. “Visitation from Ikon and Mountain Collective has been much less than visitation from Epic.”

In a blog on the resort’s website, Henceroth said dropping out of Epic reduced skier visits through February by 35 percent. “We aren’t quite where we want to be yet, but we are heading in the right direction,” he said.

Meanwhile, Eldora, Colo., with parking problems of its own, advised skiers to get to the resort before 8 a.m. or risk being turned around. Next season, Eldora will begin charging single-occupancy vehicles $10 on weekends and holidays and major midweek snow days. It will also add more shuttles, carpool incentives, and (eventually) expand parking lots.

Jackson Hole, Wyo., which enjoyed another record snow year, also added more shuttles, parking spaces, and introduced an app that let guests check parking-lot availability and lift line waits ahead of time—all in an effort to head off the overcrowding and complaints that plagued the resort in 2018-19, its first season on the Ikon Pass.

“We made some operational pivots to improve the guest experience,” said Anna Cole, communications director. “They were well received. When we had full parking lots we were able to move people around the mountain smoothly.”

Alta, Utah, which saw a bump in snow totals and Ikon passholder visits last year—along with complaints about overcrowding—is also monitoring the impact of multi-area passes. “We definitely had some increased skier visits last year [a top-five year] with the Ikon and Mountain Collective,” said Andria Huskinson, communications manager. “It was a banner snow year, so I think it was a combination of everything. We need a few years to see how it’s all going to play out.”

That was pre-coronavirus thinking, but it applies to the present as well. How quickly will the coronavirus shutdown pass into history? How soon will memories of great seasons past inspire skiers and riders to return to the slopes? Facing uncertainty about when life will return to something resembling normal, everyone will be waiting to see how it all plays out.