Lessons for resilient leadership for managers at all levels. 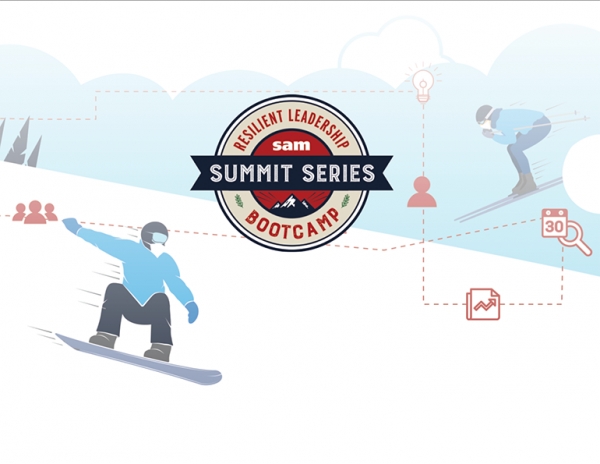 Beyond mottos, it’s something Col. John Vermeesch, Ret., has used as a lodestone for a life that’s included a degree from West Point, a few decades of beating boots as an infantryman, along with three combat tours in less-than-friendly parts of the globe—experience that he now applies to his role as a professional leadership coach. He brought that package to the first session of the SAM Summit Series Bootcamp: Resilient Leadership Training (saminfo.com/bootcamp) Resiliency, and how to get and maintain it, was front and center.

The short of it, for those who don’t want to read past this point, is “Know Thyself.”

But if you’ve made it to this page in this magazine, you’ve been “in the business.” You have bumped a chair, groomed a trail, fitted some boots, sold a pass, or maybe even splinted a leg in sideways snow. The point being, you’ve got a bug in you that’s probably been the source of awkward conversations with loved ones as to why you live the life that you do. It’s one that lets you be outside and free to play with gravity. But there is a cost. And to pay the daily tab, you have to be resilient.

“There’s a technique that you’re taught as an infantry soldier as you’re leading a patrol—if you’re out in the woods or wherever you are, just get on a knee and STop, Look, Listen, and Smell,” said Vermeesch, relating a story about the time he and his team “moved to the sounds of the guns.” A mosque in Baghdad had been bombed, and he and his platoon were the first Americans on scene. Imagination cannot conjure that reality.

Now, there is a fantastic chance you will not have an IED detonate on your property. But sifted down to the snow level, so to speak, the lesson offered was what happens to a person’s mind under challenging circumstances. And for any of us who have ever received that call about a lift evac in progress or a POS crash on a holiday Saturday, you know the panic that can punch you in the gut. And that was the universal of the story.

“You have to breathe to regain control ... to regain the initiative. That’s the ‘smell’ part—breathing,” he said. It’ll allow the panic to pass and let you focus outward toward fixing whatever crisis you’ve found yourself in.

It might seem incongruous to draw parallels from a firefight to something like a lift malfunction, or an irate customer not being able to pay for his fries with a credit card—but our reactions do come from a host of similar physiological triggers. Understanding what yours are is important. With that in mind: Take the time to know what your triggers are in advance of a crisis, so that they don’t get tripped easily when the world goes sideways. And if and when they do get tripped, take a breath, assess the situation, and focus on working the problem.

Part of being a resilient leader is knowing how to react in a tense situation, which restort staff encounter most often with upset guests. “Try to truly understand the perspective of the agitated person,” said Vermeesch. “Get to the root cause of it. Most people just want to be heard, so listen and offer a solution.” (For more on this, read “Take It Down a Notch,” p. 36)

Empathy. Active listening. Problem solving. They are the three skills that will win you the trifecta in the customer service game. But having—and more importantly using—all three when something hits the fan on your 83rd hour of working a holiday week can be just the slightest bit challenging. And that’s why taking the time to do the mental pick-and-shovel work of resilience in advance of that hour is so important.

“Rehearse how you want to act in a hostile environment before you get to that hostile environment,” offered Vermeesch. “Do it in a calm, well-lit environment after you’ve had some food and are well rested. You have a much better chance of navigating a crisis successfully if you have taken the time in advance to think through how you might react when something stressful happens.”

This is a simple and easily-repeated exercise that you could do during your commute. You can also role-play with others to get feedback on your reaction.

It’s impossible to foresee the specifics of any one crisis, how it might unfold, and how you might react to it. But if you’ve been in this business for a few years and have a half-decent imagination, you can conjure up some likely scenarios: The lift evac. The POS crash. A fire. A death. Picture what your face might look like when you get the news. What tone will you use with your team? How will they look at you? How will the guest look at you?

But more importantly, take the time to imagine the unimaginable, something fairly-to-really bad that you’d never expect. Doing so won’t turn you into a Chicken Little or cause spasms of morbid pessimism. What it will do is give you a level of mental fitness and fortitude that you can access when something really bad does happen, such as, say, I don’t know, maybe a pandemic?

Tend To Your Team

Doing the work in advance will give you the capacity to recover quickly in the future. And in no area is doing the heavy lifting ahead of time more important than having the right team.

“You can’t wait for a crisis [to hit] to start building a team to respond to that crisis,” said Vermeesch. “All of the little things [you’ve overcome] leading up to the big one makes you who you are as a leader and a team when the world goes super chaotic.”

Vermeesch stressed that having a well-jelled team is critical to not only crisis management, but also running a successful resort. And that doesn’t happen when you sit at your desk—it comes through “leadership by wandering around,” said Vermeesch.

It was a point made to highlight the importance of knowing your people, of taking the time to interact with them, getting to know what’s important in their lives, and finding the points of intersection with what you’re trying to accomplish as an organization. He called it “knowing what is the why”—why you do what you do as an organization and why someone wants to be a part of it. It doesn’t have to be found through group hugs or daily trust falls. Just the simple sharing of moments, which can lead to shared purpose.

To create that environment, you have to have the pre- and post-shift meeting with your people every day. And have a whiteboard.

“At the end of the day I would ask everyone on my team to write down three good things that happened to them that day and why they think it happened. But I’d settle for one,” Vermeesch admitted.

Because, especially nowadays, one is enough when you hunt the good stuff.