Snowsports and Rental in the Age of COVID 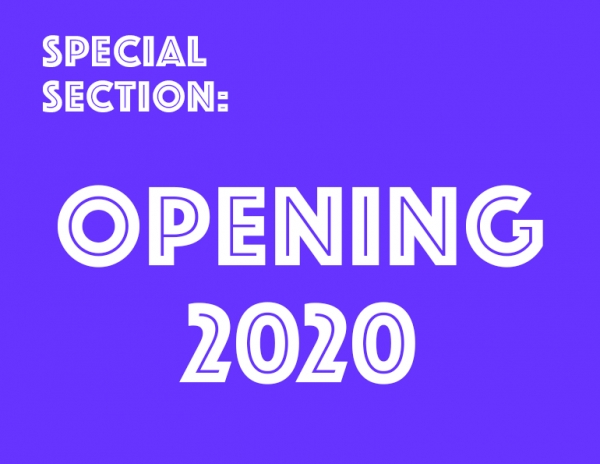 When it comes to COVID and the ski resort business, all parts are not created equal. With relatively minor adjustments (e.g., reduced lift passengers), most resorts expect ski-and-ride operations to at least resemble normalcy. On the other hand, food and beverage services are likely to take a big hit, with indoor gatherings in most parts of the country tightly restricted.

Ski school and rental operations will fall somewhere in between. It will certainly not be business as usual, but, with various modifications, ski school and rental business should still function relatively smoothly and even profitably. That, at least, was the impression created by a panel of resort operators and industry leaders in a Sept. 14 SAM Huddle. Here are some of the COVID-driven changes the panelists proposed, during the Huddle and in post-Huddle interviews.

PLAN FOR THE WORSE

No, not the worst, which presumably would be a complete shutdown. But given the fluidity of COVID mandates, one day’s safety standards might be obsolete the next. Rachael Milner, snowsport school director at Cardrona Alpine Resort and its sister resort, Treble Cone, in New Zealand, said that, when the resorts opened for the austral winter, national COVID-driven restrictions were minimal.

Nevertheless, in their planning and staff training for the season, the resorts prepared for stricter regulations. When the New Zealand government felt compelled to reintroduce more stringent standards, Cardrona and Treble Cone were ready to adapt to the new rules. Rather than facing a mad shuffle to re-train staff and reorganize operations to comply with the new protocols, Milner said the two resorts, having prepped for the worse, were able to reopen with the necessary modifications in 24 hours.

Burt Skall, snowsports director at Taos Ski Valley, N.M., is adopting a corollary approach. Taos plans to start the season with a private-lessons-only policy, with group limits of five. If, as the season progresses, it appears that group lessons will be possible, Taos will add them. But as Skall said, “it’s easier to expand than to contract.”

Most resorts are already going to a reservation model for lift ticket sales, but most of the same model can apply to ski school and rental transactions. This is a process that Mat Joyce, head of rental and retail at Squaw Valley, called “virtual queueing.” Elianne Furtney, managing director of Squaw’s ski and snowboard schools, said that Squaw plans to collect guest information—skier level, equipment sizes, etc.—and “pre-form groups and assign instructors” prior to arrival, minimizing the chances of a snarl of humanity during check-in or lineup.

Skall outlined a step-by-step process by which lesson and rental reservations can be executed. Start with an on-phone or online reservation, followed by a confirmation email, followed by a text before guest arrival. Huddle panelists agreed that most customers are tech-savvy, and that resorts should take advantage of various communication channels to get as much customer-resort interaction nailed down before guests arrive. 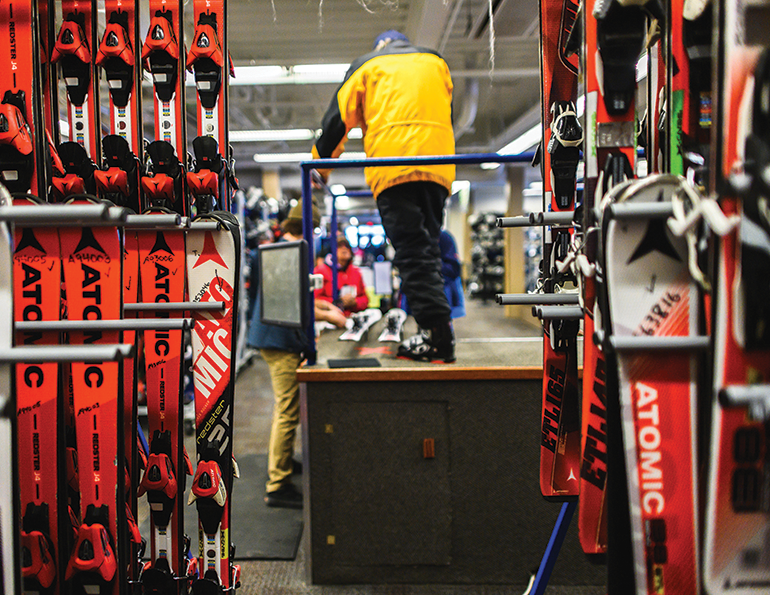 Ski resort operators will need to rethink the flow of their rental operations to limit guest time spent indoors. Photo courtesy of Giants Ridge.For the coming season, ski-resort operators should be guided by a two-word imperative: Get out! In the age of COVID, avoiding indoor clusters of people is probably objective number one.

How to go about it? Richard Wren of Boyne Highlands, Mich., plans to “rethink the flow through the rental shop,” with a one-way concept helping to speed up rental transactions and ease the ability to maintain social distancing. Taos is repurposing its children’s center to handle its lesson-cum-rental process, with customers to be assigned specific arrival times when making reservations. Appointments will be staggered in approximately five-minute increments to ensure that the resort can maintain the 15-person limit within the building. Entry to the facility will be gated and monitored to avoid any chance of overflow.

In order to move as much of the rental and school business outside as possible, Wachusett, Mass., is adding deck space. The resort purchased heated benches from Dragon Seat, similar to those used on NFL sidelines, for guest comfort.

Les Sommets Group in Quebec, five resorts in all, looked into delivering rental gear in the parking lot. The idea: Guests (with reservations) check in with a parking-lot ambassador, and a rental-shop employee brings equipment for booting up at the car. Limit indoor boot fitting, as much as possible, to new or never-ever skiers. Some Boyne resorts were exploring the possibility of delivering rental gear to nearby lodging, said Wren, although logistical hurdles have made that option impractical at Boyne Highlands.

Many resorts, like Taos, are only offering privates lessons; if not, group sizes of five or fewer is a sensible standard. Wren plans to employ a hybrid concept: “Privates first, and what’s left over (i.e., instructors) can go to groups.” He conceded that by reducing group sizes from a typical eight-to-ten range to a max of five, “it will be hard to judge inventory.”

With modifications, the snowsports school business should be able to function relatively smoothly. Photos courtesy of PSIA-AASI.

To compensate for the reduction in group size, some resorts have considered increasing daily sessions. In other words, rather than the traditional two-hour morning and two-hour afternoon sessions, shorten session lengths and introduce a mid-day session as well. This is a model that might apply most easily to resorts that offer night skiing.

Seasonal kids’ programs present a particular challenge in the downsizing of groups. Simon Pagé, les Sommets’ director of guest experience, says that he expects a roughly 20 percent drop in kids numbers this winter, but that will still mean accommodating almost 5,000 kids on a busy weekend at the five resorts. One plan to deal with that volume while maintaining social distancing is to introduce kids’ sessions starting at 3 p.m., again enabled by night skiing.

At one les Sommets resort, a large but lightly used bar area will be repurposed for kids’ groups. The resort group also planned to rent mobile units for additional indoor warm-up space for kids. But still, the aim is to “try not to bring them inside as much,” said Pagé, by having plenty of outdoor heated zones such as firepits.

At Squaw, the plan is to “spread and stagger,” as Furtney put it—spread smaller groups of kids throughout resort facilities and stagger lunch times. Les Sommets is planning a similar strategy, but Pagé conceded that younger kids don’t always abide by a well-structured schedule, so flexibility will be needed. Any 8-year-old can tell you: When you’re cold, you’re cold, schedule be damned.

Wren said that Boyne Highlands is eliminating its 3- to 6-year-old programs altogether. That’s partly because, as an especially hands-on age group, 3- to-6-year-olds present a greater exposure risk, but also because fewer kids’ groups means more space for the remaining older kids to spread out.

Milner said that Cardrona and Treble Cone started the season with 90 instructors, but when business surged she was forced to scramble to hire another 56. The resort was able to pull it off, but the result was significantly more lower-level instructors, causing an occasional “operational pinch.”

Panelists reported that some veteran instructors, concerned for their safety, are choosing not to return for this winter, taking what Skall called “a sabbatical.” If they decide to return next season, they will not lose their status within the ski school. And Pagé suggested that younger instructors, often attracted by the social (i.e., ski bum) nature of the job, might be turned off by restrictions on locker-room or après-ski fraternizing.

Given Taos’s privates-only approach, Skall predicted he will be able to get by with 50 percent of his normal instruction staff. But if business booms, he might find himself having to scramble for lower-level instructors, as Milner did.

EXPECT TO BE BUSY

After an initial lockdown mentality swept the country, many businesses correspondingly adopted a gloom-and-doom attitude. It was assumed that customers would stop coming, and revenues would nosedive.

Perhaps so for some businesses, but the outdoor recreation industry has proven to be a bright spot. Milner reported “we underestimated the enthusiasm,” and that the resorts were “way, way busier” than the 35 percent of normal business originally forecast.

In the U.S. this past summer, adventure parks and golf courses reported robust, even better-than-average revenues. Bike sales were gangbusters. With so many other leisure-time activities curtailed—going to restaurants or movies, attending sporting events or concerts, etc.—the demand for relatively safe outdoor recreation soared. Resorts have been reporting promising early season-ticket sales.

So, the presumption that the pandemic would be an unmitigated business buzzkill has proven to be off the mark for many recreational activities. For such ski school and rental details as staffing, traffic flow, and equipment inventory, it is sensible to be ready for at least a normal season and perhaps one above average. If the summer trend continues into this winter, outdoor recreation will remain one of the winners in the new pandemic normal.