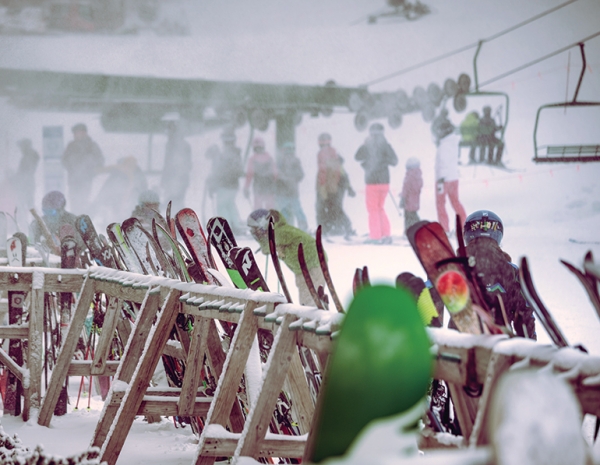 Are we on the cusp of a Covid skier boom? If smaller local resorts are any indication, this pandemic ski season is attracting huge numbers of new and lapsed skiers and riders into the sport, and bringing newcomers into winter outdoor activities generally.

As large destination resorts struggle to comply with travel quarantine orders and new reservation systems and many members of the public shy away from flying and crowd exposure, smaller local and regional resorts have been happy to fill the void. Many of these areas reported being overrun with people anxious to get out of the house.

Upside surprises. “We’ve been absolutely slammed,” said Ross Boisvert, owner of McIntyre Ski Area in Manchester, N.H., where pass sales at the two-chairlift, two-conveyor area were up 21 percent, and day tickets through mid-January were up 27 percent. Tubing was 89 percent ahead for the month of January, despite cutting capacity from 200 to 140 for each two-hour session.

“Approaching the season, I was Mr. Downer,” Boisvert said. “I thought we’d be down at least 50 percent. We’re probably ahead 65 percent.”

At Ski Cooper, Colo., it’s been a “fabulous” year with the best December in history, and January surpassing revenue expectations with 12 days to go, according to spokesman Patrick Torsell.

It’s been a “banner” year at Nub’s Nob, Mich., said general manager Ben Doornbos, where pass sales were up 20 percent over last year’s record, and day tickets were also running “way ahead.”

Despite opening three weeks later than usual, visits were also “significantly” ahead of last year at Welch Village, Minn., said GM Peter Zotalis. He said tickets, passes, and rentals are all up.

“It’s been a great season so far,” agreed Sammie Lukaskiewicz, VP of marketing and communications at Crystal Mountain, Mich. “There’s been an increase in outdoor rec in general. Rentals are up, Nordic is doing well, there’s been an increase in fat-tire biking. People want to get outside and get fresh air. We opened about a month later than usual, but it’s not indicative of a bad season.”

On the ski and ride side, Lukaskiewicz said there was an increase in both lapsed skiers and new customers. The telltale signs of the lapsed crowd: “Looking out around the slopes, we’ve noticed people without helmets and vintage equipment,” she said.

Similar scenes have played out at Caberfae Peaks, Mich., said GM Pete Meyer: “We’re seeing a huge increase in families getting skis out of the attic and basement, who haven’t skied in five or 10 years, wanting to get back in the sport.”

Meyer said he was “a little concerned” at the start of the season, especially with Michigan’s ban on all indoor dining, and what impact that would have on turnout. That concern proved unfounded.

Happy times. “It’s been a challenging season, but a very good season,” he said. “We’ve seen very strong demand for the sport of skiing and snowboarding and people wanting to recreate outdoors. I’ve never seen so many people so happy to be outside, feeling normal. They’re happy to wear face coverings, use cars as their day lodge, and adapt to all the restrictions.”

At Snowy Range, Wyo., owner Aaron Maddox agreed that happiness is rampant. “Nobody’s complaining about how thin the snow is, they’re not complaining we raised prices. They’re just happy to be outside.”

Maddox did admit people were unhappy about the area’s newly instituted reservation system, adopted mid-season, for day skiers. But with demand outstripping capacity, he said reservations were the only answer. That, and pushing more people to ski midweek—a trend that has sprouted all across the industry this pandemic season.

Midweek business booms. “We’ve been overwhelmed by the number of new and returning skiers to the sport,” said Doornbos at Nub’s Nob. “Saturday and Sunday are still strong, but we’re doing more midweek business, which is exactly what we were hoping for.”

Despite the crowds, Nub’s has not instituted a reservation system for day tickets or passholders, instead relying on its parking lot to control capacity.

“When there’s nowhere to park, that’s essentially what our ski area can handle,” Doornbos said.

At Welch Village, Zotalis said the resort was busier than usual midweek, both at night and during the day. “We’re seeing a lot of new people, lapsed skiers, tons of families, tons of kids under age 10,” he noted.

The lack of a reservation system was a selling point for many smaller resorts. Katie Boedecker, owner of Showdown Montana, with four lifts and 34 trails, said the resort was enjoying a good season despite low snowpack thanks to increased traffic from Montanans who might typically head to Bridger Bowl and Big Sky (two and three hours south of Showdown, respectively).

“They’re requiring reservations, plus I think people are looking for a smaller ski area experience this year to minimize exposure,” she said.

At Monarch, Colo., where visits are on par with last season despite less than stellar snow conditions, the resort launched a ‘Weekday Warrior’ messaging campaign to encourage midweek visits. It moved many of its ticket promos to midweek, and doesn’t require reservations for those days. Powder Alliance passholders have no access on Saturdays, and “migration tickets”—$59, for passholders from “other” mountains—are midweek only.

“It’s all panned out to be basically the same number of visits, but a better experience for all involved,” said Randy Stroud, GM and COO. “Slower days are a little more busy; busy days a little less busy—a better guest experience for everyone.”

Stroud said Monarch, which has a 90 percent-plus season pass renewal rate, lost 25 percent of its past passholders this season, but gained many new passholders—a group that comprised 50 percent of this year’s purchasers.

“Regular passholders opted out this season, I think because of Covid,” Stroud said. “But fortunately, twice as many opted in. I hope next year they all come back to us.”

Newbies on the Rise

In addition to lapsed skiers, many smaller resorts reported big increases in new skiers. Scott Crislip, GM at Snow Trails, Ohio, said, “All the regulars are coming, but we’re also seeing a decent influx of new people.” Crislip said the resort was seeing a “huge spike” in its ‘Let’s Get Started’ program. “I think a lot of people are trying the sport,” he said.

At McIntyre, Boisvert also saw a lot of new people are trying the sport. “We’ve had a lot of newbies,” he said. “Private lessons are up about 30 percent.”

He said the area’s Saturday night special is also very popular. For $38, people can try skiing, snowboarding, tubing, or all three.

King Pine, N.H., was also having a good season despite challenging weather events before the Christmas and MLK holidays. Pass sales were up, and day ticket revenue was also running ahead after eliminating all discounts, said Thomas Prindle, marketing director. Plus, King Pine tapped into the growing uphill access market with a popular new “human power” pass.

With the influx in visitors, Covid-related restrictions and mitigations strained management and staff. The combination has made life challenging at many smaller resorts. 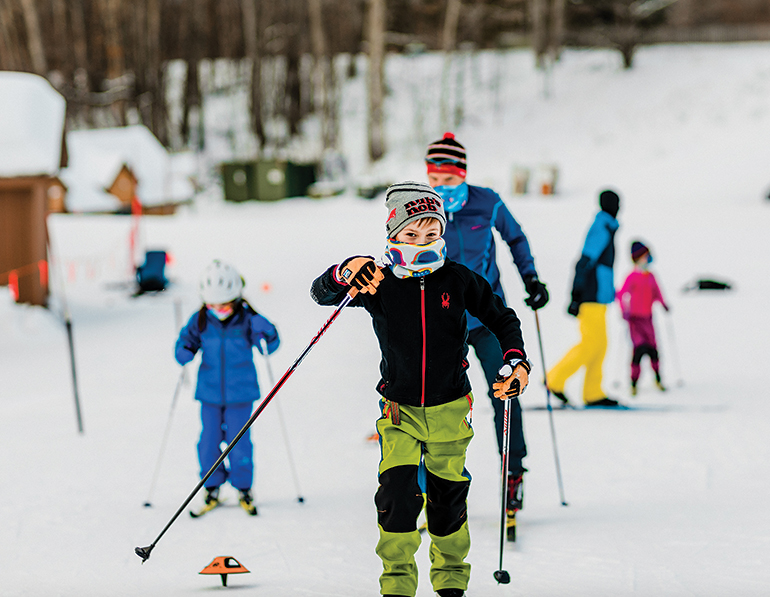 “It’s chaos. My head is spinning,” said Zotalis of all the Covid restrictions ski resorts had to comply with in order to operate this season. “We got ready for the season based on certain assumptions. Right before we opened, everything changed, and we had to modify again. A lot of it is just trying to decipher changes and how they affect ski areas, which can be a bit of a gray area. We haven’t been able to do any traditional marketing. It’s constant education.”

He said the non-stop messaging was hard, adding, “I can’t believe the number of signs we have up.”

Crislip, at Snow Trails, agreed: “Planning for this season has been very strenuous and challenging. But being a smaller, independently-owned resort, we can react and change on the fly, which has been helpful for us.”

Boedecker said Showdown prepared four different operating plans ahead of the season, and stockpiled a large reserve of hot chocolate.

“I probably give out 20 pitchers of hot chocolate every day to people waiting in line,” she said. “It’s my secret weapon. You can’t be mad and drink hot chocolate.”

At Snowy Range, Maddox said all the restrictions, particularly advance reservations, have actually had a lot of upsides.

“We know who’s coming, when they’re coming. We don’t have any staffing issues. We’re not surprised out of the blue by a busy day or weekend. Non-Covid, everything could be bursting at the seams. We eliminated all that. It’s really quite pleasant.”

Pleasant, chaotic, challenging, uncertain—however you describe this pandemic season, Doornbos at Nub’s Nob probably summed it up best when he said, ”Everything is going very, very well. But I wouldn’t wish this season on us or anyone else ever again.”