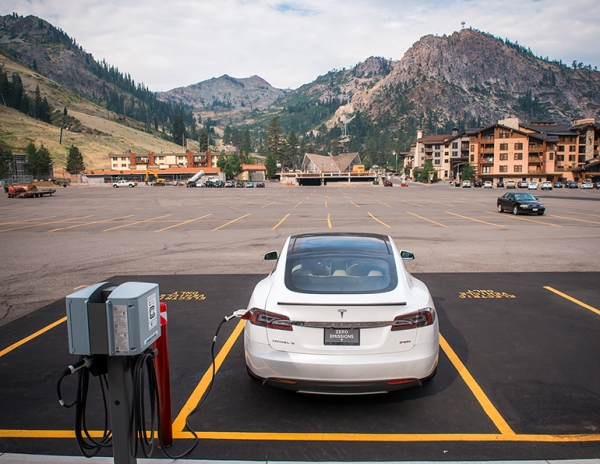 If we’ve learned anything in the last year, it’s that a lot can happen in a few months but ski areas rise to the occasion when there is a call to action. A renewed call for the business community to do more to combat climate change is ringing loud and clear with many resort leaders.

Since taking office in January, the Biden administration has recommitted the United States to the Paris Agreement, pledging a “whole of economy” approach to fighting climate change and charging the public and private sectors to work concurrently to reach net-zero greenhouse gas emissions by 2050. The administration also set a 2030 target for halving carbon emissions.

As of July, a proposed bipartisan infrastructure plan included spending for several climate-related initiatives, such as building a nationwide network of electric vehicle charging stations, purchasing thousands of electric buses, and implementing resiliency efforts to tackle climate change. Other proposals were cut from the bill, though, including plans to make electricity carbon-free by 2035 and spending billions in tax incentives for clean energy and technologies that capture and store carbon emissions.

These tactics and negotiations at the federal level aim to address a threat the ski industry has recognized long before Biden entered office (see “Climate Goals,” SAM July 2020). There is much work to do, and many resorts are making headway in reducing their carbon footprint through sustainable business practices and efforts beyond the boundaries of their skiable area. Squaw Valley Alpine Meadows (SVAM), Calif., is an example of a resort with the perseverance required to move the needle.

In early 2018, SVAM set a goal to transition to 100 percent clean energy. It aimed to do so by working closely with its power provider, Liberty Utilities, to support off-site renewable energy sources, such as solar arrays, and build on-site battery storage projects that would help manage demand peaks.

Both entities were motivated by their individual renewable goals and California’s Senate Bill 100 (SB 100), which passed in 2018. SB 100 calls for renewable and zero-carbon energy resources to supply 100 percent of electric retail sales to customers by 2045.

California’s first order of business under SB 100 was a feasibility study. A final report was published in March 2021, finding that a) SB 100’s goals are, in fact, achievable, b) “that construction of clean electricity and storage facilities must be sustained at record-setting rates,” and c) “diversity in energy resources and technologies lowers overall costs.” Also, “further analysis is needed.”

During the feasibility study, the proposed SVAM/Liberty project to support more off-site renewable production and increase on-site energy storage was denied by the California Public Utility Commission, which regulates private utilities, for discrepancies in the analysis of the existing system.

Here is where that perseverance comes in. Despite the regulatory setback, SVAM continues to subsidize new Liberty Utilities renewable energy projects by paying an elective “green tariff” on the energy it consumes at the resort, which is largely purchased from Liberty Utilities’ solar generation plant.

SVAM pays a "green tariff" on the energy it buys from Liberty Utilities' solar pannels.

According to SVAM sustainability manager Brad Robinson, this is a long-game approach: “Insights into local markets for renewable electricity show it’s not quite yet competitive with traditional sources,” says Robinson. “We pay a premium now to help get the industry itself through a hurdle to create a marketable solution.”

While awaiting systems-wide regulatory and infrastructure upgrades, Robinson says SVAM continues to make “opportunistic adjustments” at the resort level. These include replacing old technology with the most efficient option whenever something breaks, such as lamps or IT equipment.

Community focused. SVAM continues to work with Liberty Utilities to find a solution that will benefit the larger community by bringing more renewables into the mix of energy available locally. That was the aim of the partnership formed in 2018, which forecast its proposed projects “will provide additional clean, renewable energy options for Liberty Utilities’ 49,000 customers in California” across 12 towns.

The shift away from fossil fuels, both related to electricity and elsewhere in resort operations, is estimated to nearly halve SVAM’s total annual carbon emissions to about 6,396 metric tons, “which is the equivalent to the emissions generated by the annual electric use of 959 homes,” according to the resort.

Along for the Ride

Framing its carbon reduction initiatives in terms of household usage is one way SVAM interprets its values to help guests understand its climate actions. Customer communication is one of the “biggest and most important challenges” Robinson and his team face in successfully implementing resort-wide sustainability efforts. SVAM publishes annual sustainability reports that highlight “guest achievements,” which are the impacts customers make each season by participating in the resort’s initiatives.

Cutting down on car trips. Individual customer and staff commutes to the resort contribute the largest indirect impact on the resort’s total carbon footprint, so SVAM offers multiple programs to minimize car trips while moving guests to and around the mountain.

Shuttling and carpooling programs have decreased the number of cars in the parking lot and reduced the number of park-out days. For example, the on-demand, app-based Mountaineer shuttle eliminates 20,000 vehicle trips from mountain access roads annually. Operated through the winter season by a non-profit transit agency, the Mountaineer is funded through a percentage of SVAM lodging and ticket sales with additional buy-in from other resorts in the area.

The on-demand Mountaineer shuttle is one transport solution SVAM has implemented to reduce its indirect carbon footprint.

Through extensive surveying, SVAM knows the rider experience on the Mountaineer has been overwhelmingly positive for visiting guests and a resource for employees. The reduction in traffic congestion and vehicle emissions caught the attention of the wider North Lake Tahoe region, which has expanded on the model.

“The Mountaineer ran free of charge during the 2019-20 season and, since then, all bus transportation in the Tahoe region has become free,” explains SVAM public relations specialist Alexandra Spychalsky. “While the Mountaineer only operates in the valleys in the winter, a similar service, funded through Tourism Business Improvement District taxes, is launching in North Lake Tahoe with on-demand ride service available during the busy summer tourism season.”

For guests who choose to take their own wheels, SVAM was the first resort in the state to offer free electric vehicle (EV) charging stations on site in 2013. There are currently four installed at SVAM; these appeal to guests who largely visit from the San Francisco Bay Area and Sacramento where there are large EV presences.

With growing demand for fast EV charging county-wide, “the North Tahoe area plans to take a more decentralized approach, with shopping centers allocating sections of their parking lots to new charging stations,” says Robinson. He hopes to add additional stations at the resort, too.

Carpool incentives. SVAM also partners with Protect Our Winters to offer “POW Carpool Parking.” In the 2018-19 season, 44,780 cars took advantage of premium parking available for free to guests that arrive with three or more people to a vehicle. Annually, this keeps about 25,000 cars off the road, which equates to 1,970 metric tons of greenhouse gas emissions or 67,000 trips around Lake Tahoe. Both organizations use the program to inspire customers to think about their direct impact on the climate and reward the desired behavior change. 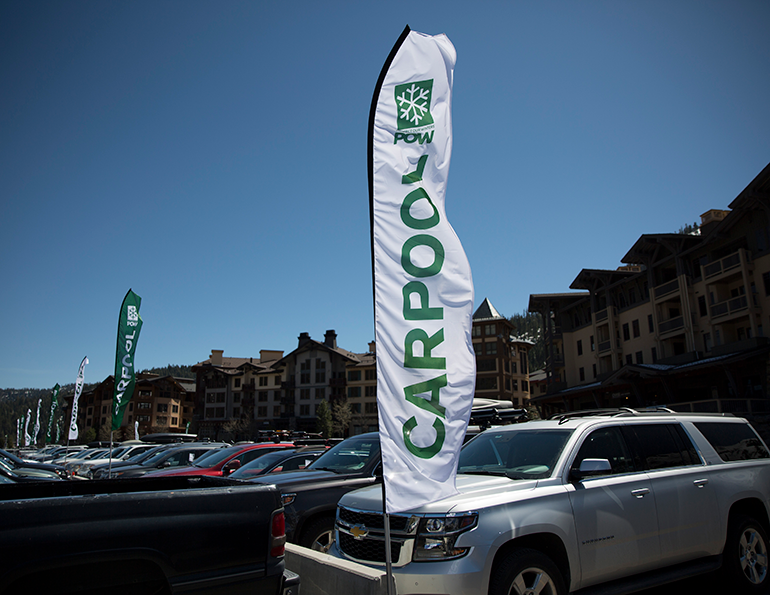 SVAM partnered with Protect Our Winters to introduce free, premier parking for guests that carpool.

Eliminating water bottle waste. Another SVAM program that directly invites customers to participate in reducing their environmental impact is the ban of single-use water bottles sold at the resort. First implemented in 2016, SVAM’s “Drink Mtn Tap” program forces guests to ditch disposable bottles while on site and instead fill their reusable containers from the 25 refill stations installed across the resort (inexpensive reusable containers are available to purchase).

To date, this shift in the resort’s purchasing decisions have removed 420,577 plastic bottles from the waste stream, a savings of more than eight metric tons of carbon from its total waste generation. 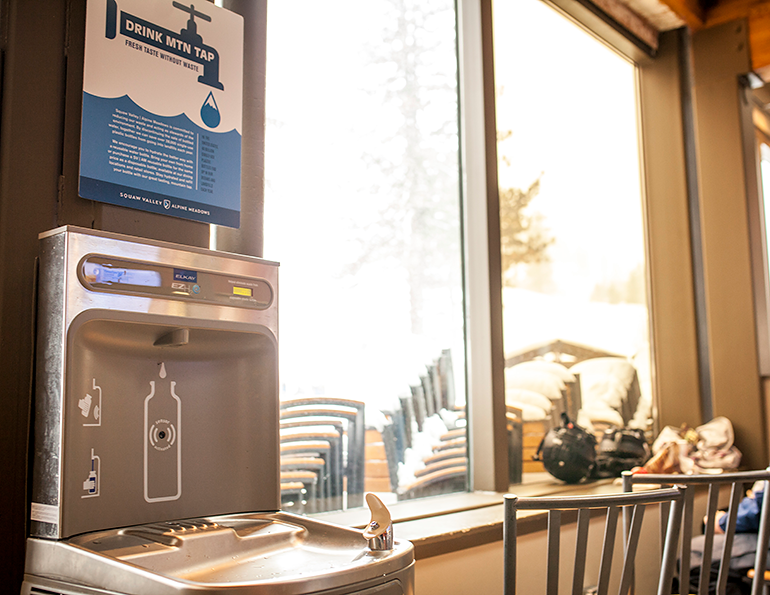 SVAM has eliminated 420,577 plastic water bottles from its waste stream since the inception of its "Drink MTN Tap" initiative.

Carbon reduction clearly starts to add up when looking at these types of programs in aggregate. Not as easily measured are the benefits of climate advocacy. SVAM’s approach to advocacy is largely through public education, including promoting its successes with NSAA’s Sustainable Slopes program to customers as a way to motivate them to look deeper at their own carbon footprints on and off the hill.

“Thousands of skiers come to see us every winter, and it’s important to share the efforts we are making with guests,” says former SVAM public relations director Liesl Hepburn. “They want to know what we’re doing and hold us accountable. What we’re doing is visually apparent when you come on site,” so guests can’t ignore it. “We have the ability to impact people and share the message. At the end of the day, advocacy is our biggest area of influence.”

The resort also participates in advocacy efforts on the state and national level—particularly around the drive toward 100 percent renewable energy—and strives to set an example for other businesses.

SVAM is gaining national attention for another conversation happening locally with the Washoe Tribe of Nevada and California, on whose ancestral lands the resort is located. In 2020, the resort committed to removing derogatory language from its name, with a new name to be unveiled after the winter season.

The resort turned to Washoe leadership “to better understand not only to how to simply stop offending the Indigenous community, but how to better align with the history of the Native people who occupied the area,” says Hepburn.

While renaming a beloved and longstanding business is a heavy lift, the widespread attention on the topic brings opportunity for further education, advocacy, and partnership. Inviting Washoe leadership into conversation from a place of curiosity and respect has been key in developing a collaborative relationship. Much of the Washoe community now lives over an hour outside the area and, Hepburn explains, “as this work is a first for us, we need to approach it in a way that is sensitive to their history in the valley. We want to learn how it feels to come to the valley and feel welcome here.”

Social impact work supports conservation. As the resort strengthens its relationship with the Washoe, SVAM hopes to co-create programs that show why it’s important to preserve the area and invite a more robust tribal community presence at the resort by hosting cultural events, interpretive tribal tours, and special ski and ride programs.

Environmental conservation efforts and social impact go hand in hand. While the resort is working fairly transparently on developing these initiatives, it recognizes the need to follow the lead of the Washoe, who have a responsibility to their tribal elders to get buy in and ensure their sacred culture is upheld.

An Appetite for Change

The resort has learned there is a large appetite for these conversations from guests, the resort community, and the larger community. While the pandemic has disrupted progress on some of their sustainability goals, SVAM continues to press onward, knowing its efforts make an impact. Even the best laid plans require flexibility, and SVAM continues to innovate and model what is possible when it comes to environmental action in the business community and on the individual level.