Wear, Why, and How

Proper alignment and lubrication will reduce wear and increase the life of parts and components. 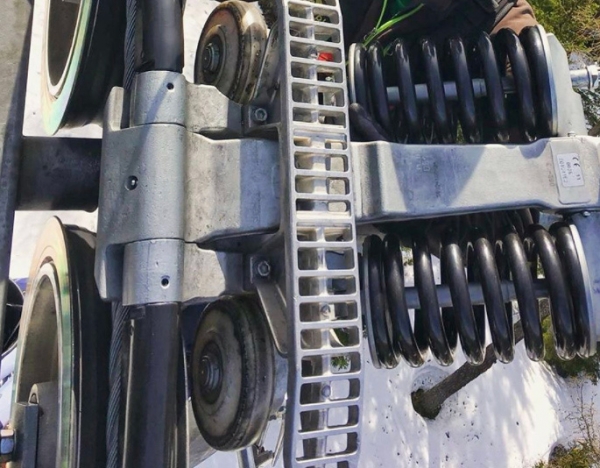 In ski area maintenance, the things that break get instantaneous attention—but the things that have worn out actually use up most of the maintenance crew’s time and money. Here, we’ll look at how and why wear occurs, how much of it can be controlled, and why lubrication and alignment are critical.

Wear results whenever mating surfaces are moving at different speeds. Some wear is unavoidable, such as people sliding their skis on chairlift footrests or the damage that boots do to lodge flooring. But looking at the almost endless list of mechanical components that wear out—sheave liners and bearings, bullwheel liners, hydraulic cylinder seals, couplings, wire ropes, loading conveyors, snowmobile tracks, and groomer tracks, to name a few—much of that can be reduced if we understand more about the mechanisms and causes.

Two challenges make wear difficult for people—from engineers to accountants—to recognize: It almost always takes place very slowly, and it happens on a microscopic scale. The combination of the two is insidious. Moreover, unlike those parts that break and need immediate attention, people tend to accept wear as a fact of life and often don’t see that there’s room for improvement.

HOW DOES WEAR ACTUALLY HAPPEN?

Tribologists, the scientists who study how wear occurs, generally say there are three major types of wear: erosion, abrasion, and adhesion. Erosion, of course, isn’t something that the maintenance crew typically gets involved with. It’s abrasion and adhesion that keep us hopping.

Abrasion happens when a contaminating particle gets between two surfaces that are moving at different speeds. If the particle is larger than the clearance between the peaks of the materials, it will make a gouge in the softer material.

Figures 1 and 2, below, show greatly magnified views of how abrasion occurs.

In Figure 1, we see a side view of the two parts and that the abrasive particle is larger than the clearance between them. Then, in Figure 2, shown at 90° to Figure 1, we see the abrasive particle plowing through the softer material, both breaking off pieces and leaving raised ridges, not unlike a sharp pointed object, such as a knife, scraping across a piece of hard plastic and gouging out a groove. 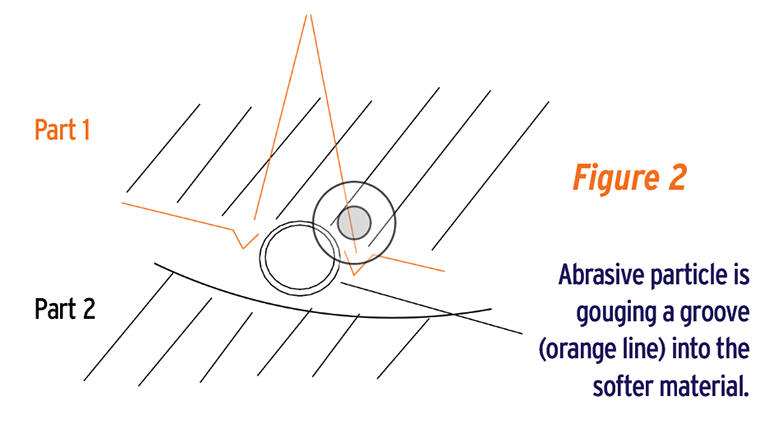 There are many things that can affect the abrasive damage rate. The more important ones, though, are the material hardnesses, the contact pressure, and the presence and properties of any lubricant.

Heavier pressure tends to increase the material removal at an exponential rate. A 4.5-inch disk grinder demonstrates this: When we lean harder on the grinder, the abrasive works harder, and the material is removed faster.

Relative hardness. In addition to pressure, the relative hardness ratio—comparing the abrasive particle (such as sand) and the target material (such as a steel shaft)—is critical because the material removed is proportional to the relative hardness. A practical example of this is that we know a steel file can easily cut into materials like bolts and machine shafts, but it’s almost useless to try to file a bearing ring. 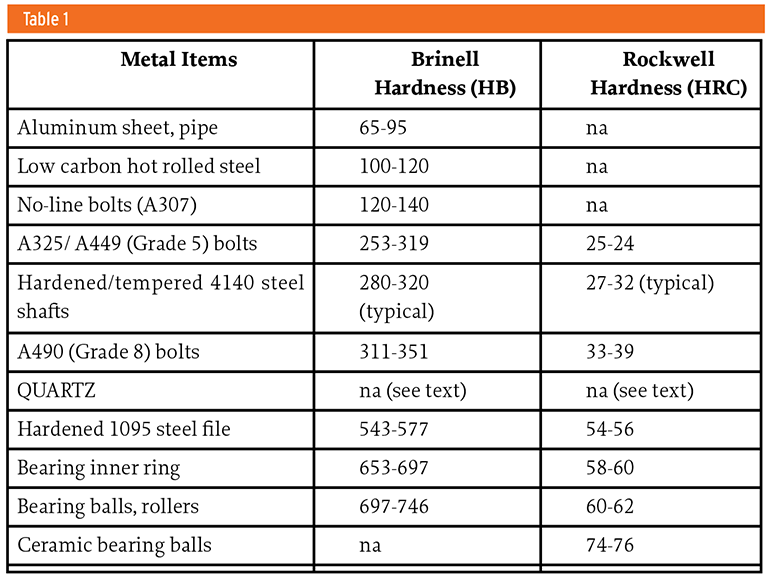 In the middle of these metals is quartz, the most common type of sand particles in North America. Sand and metals have very different structural properties, so the Brinell and Rockwell test methods can’t be used on quartz. However, using other testing methods, we find that quartz is actually harder than most machine components and only slightly softer than the hardened steel file.

It may take a long time, but if that sand gets past the seals on our machinery, it’s eventually going to cause serious damage, even on components as hard as the bearings.

Adhesive wear happens when the two materials, again moving at different rates, weld to each other at low temperatures, and then portions of the weaker one are torn off.

Figure 3, below, shows a highly magnified view of adhesive wear; the two pieces have been separated to show how the material has been torn off Part #1. Common terms for this adhesive wear are galling and seizing. For example, anyone who has tried to tighten an unlubricated stainless-steel nut and bolt knows that they will seize before the joint is tight.

These are greatly simplified descriptions of how abrasive and adhesive wear happen, of course, but we can see that the motion, operating pressures, and relative hardness of the materials are important factors to understand.

Lubrication is an extremely complex subject with long textbooks written about it (and some shorter articles in SAM), but ski area maintenance crews need to remember two key points: it is a constantly changing field and, when wear is present, an important constituent of any lubricant is the anti-wear additive package.

The anti-wear package consists of chemicals added to the base oil that tend to form layers on the metal surfaces. These chemicals, such as oleic acid and dialkyldithiophosphate (ZDDP), provide additional cushioning on the peaks of the mating surfaces and help reduce the wear rate.

Newer lubricants have been developed that can help extend the life of sheave and bullwheel bearings, which often suffer from wear accelerated by moisture from condensation. There is no such thing as a waterproof lubricant, of course, but using one of the recently developed calcium sulfate-based greases can provide more effective ways of isolating that inevitable water and corrosion. In addition, with the proper formulation, they can provide the film thickness that helps protect against abrasive wear.

THE IMPORTANCE OF ALIGNMENT

Improving alignment is probably one of the most practical and least recognized ways to improve component lives. Belt, coupling, and gear misalignment cause increased vibration, which both wastes energy and increases the components’ wear rates. It’s important for all mechanics—not just the most experienced ones—to realize that precision maintenance improves machinery reliability and reduces costs. Unfortunately, the cost of sheave and bullwheel misalignment is often unrecognized.

As mentioned earlier, wear takes place whenever there is relative motion. If the centerline of the rope travel and the centerline of the sheave or bullwheel aren’t aligned with the rope, the wear rate will increase. Like a poorly aligned tire on a truck, the continued very slight difference in paths will let the harder rope rapidly wear the softer liner, whether it’s on a sheave or a bullwheel.

In addition, when the load isn’t well centered, the bearing loads are increased—and any increase in a bearing’s load decreases its life exponentially.

Diagnosis tip: An observant mechanic would also notice the rubber “dust” in the snow below the tower of a misaligned sheave, but the frequent traffic around the bullwheels would tend to hide this symptom of misalignment.

When something wears out—whether it’s one of the examples discussed here, the seals on a hydraulic cylinder that may be misaligned, or the belts on a ventilation fan—take some time to figure out why it wore out and how the life of that part or component can be improved. Doing that now will save time and money in the future.