Why We Need Systemic Change to Solve the Climate Crisis

Stop falling for fossil fuel propoganda, and focus instead on systemic climate action. 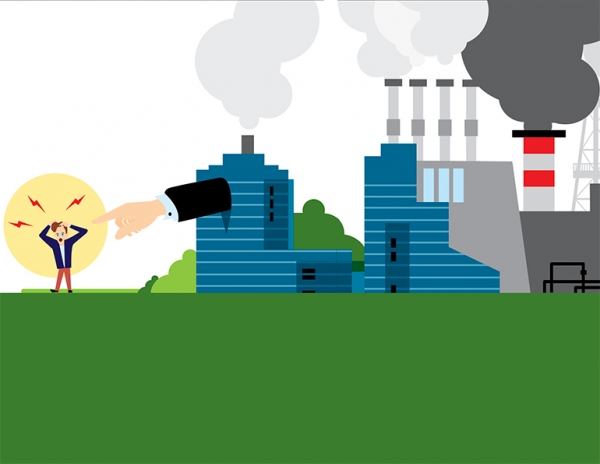 As a former climate advisor at the Obama White House and the founder of a climate consultancy, the number one question I get in my work is: “What can I do to help fight climate change?” It’s my favorite question. I think it’s reflective of people’s innate goodwill, their sincere desire to help, and that thread of collectivism that ties us together as a nation.

This is how I’ve always seen people—as inherently good, passionate, and capable. We have a deep-seated desire to help each other, to support our communities, to make things better for our children. And that’s part of why I’ve been so troubled by the narratives we have surrounding climate change today.

Let’s zoom out for a second. I want to tell you a story. It’s one you may have never heard, and it might shock you.

About 20 years ago, a large organization hired the PR firm Ogilvy & Mather to launch a vast campaign to popularize the idea of the “individual carbon footprint.” What was that organization? It was British Petroleum, or BP—one of the largest fossil fuel companies in the world.

While it may seem odd that a fossil fuel company would want to popularize the concept of the individual carbon footprint, for BP it was a strategic move: The concept shifts the blame of the climate crisis away from fossil fuel companies and on to you—as an individual, a business, or an end-user.

What is the carbon footprint concept? Perhaps you’ve taken an online carbon-footprint calculator quiz before. They are ubiquitous in the environmental world—cited in articles, put out by environmental organizations, touted by well-meaning environmentally minded people. You plug in inputs for how you live a normal modern life, and it tells you how destructive you are on the environment.

At an individual level, the prescriptions it gives you for reducing your carbon footprint are often workarounds to a system based in fossil fuels. It tells you to do things like “turn off your lights at night!” (minimize use of our electricity system), “take one less plane ride a year!” (avoid our aviation system), “bike to work!” (stop using the cars that make up our transportation sector).

The problem is, when you work around a system, very little happens to the system. If a carbon calculator instructs someone to turn the lights off at night—a real solution a calculator once gave me—and that person sits in a dark house, what happens to the electricity grid? Not a lot. And this is exactly the point BP likely had in mind. It’s way better for fossil fuel companies if individuals work around the dirty system than it is for the public to ensure fossil fuel companies get more effectively regulated.

The carbon footprint is a made up, far-reaching construct that takes a system based in fossil fuels and apportions blame on the end-user who is forced to use it. It blames you and your business for the electricity system, the transportation system, and more. It faults you for the electricity you use when you turn your lights on, run your chairlifts, and make snow—even though you as an end-user haven’t had much control over which power plants are fueling the grid at a given hour—and as a result, where the electrons that power your operations are coming from.

We’ve been falling for fossil fuel propaganda for far too long.

Climate guilt. As a consequence, climate guilt—the concept that makes everyday people hate themselves for living their lives—was born. It’s that feeling of sinking guilt some people experience when they have to get on a plane or drive a car or buy something that arrives wrapped in plastic. It’s that feeling business owners experience when their operations must inevitably utilize the electricity and transportation systems. It’s that unique type of pain of shaming yourself for things you have little control over. It’s a collective hopelessness. People tell me they can’t sleep at night, that the guilt and shame of existing in modern society impacts them as they walk through the world. But it’s not the system they blame—it's themselves. And BP helped make that happen.

Climate shaming. Alongside climate guilt is the act of climate shaming (a form of externalized self-hate)—people who wag their finger at others who are stuck living in the only system they’ve been given. We’ve all seen how rampant climate shaming runs in the outdoor community, as outdoorists attack athletes and each other (all end-users) for things like the waterproof clothing they wear and the planes they take—instead of fighting for systemic change to better regulate these industries and invest in next-generation technologies. Climate shamers have taken on the work of advancing fossil fuel propaganda within their own communities.

That’s not to say that if you have taken action to green your life that you should stop, or start blasting your heat for no reason.  Some actions to green your life—i.e., electrifying your home, buying an electric vehicle—have greater impact. At the same time, many of the individual actions that are advancing electrification can be effectively supported by climate policies to continue to develop these technologies, lower costs, increase scale, and make them available to everybody. The climate crisis is a structural problem that requires systems-level solutions. To achieve systemic change, we’ve got to decarbonize and electrify our economic sectors at scale.

If there’s one thing I want people to understand, it’s this: Climate change is not the fault of everyday people. But it is incumbent on all of us to fight for systemic change to fix it. That is why we need to move our focus to decarbonizing and electrifying our economy.

SHIFTING THE FOCUS TO SYSTEMIC CHANGE

To truly solve the climate crisis, we need to centralize our focus on structural change—actions that can decarbonize and electrify sectors and invest in next-generation technologies. How do we do this? Through government action, policy, and elections.

Register people to vote. The number-one action I give individuals who want to help fight climate change is to register people to vote. Expanding the electorate and giving more people a voice can have significant impacts on whose equities are represented in office. Businesses can spearhead voter registration efforts that help empower customers, employees, and the broader community—such as holding voter registration drives, providing voting information and resources to customers, and issuing public communications to activate voters around election time. A great resource for voter registration work is whenweallvote.org.

Work toward a 24/7 carbon-free energy (CFE) goal in your operations. Our focus needs to move beyond carbon neutrality, where companies purchase offsets as a balance-sheet exercise. There are better options available to take impactful climate action.

The ski industry has started to make strides in 100 percent renewable energy goals—with some resorts matching their annual energy consumption with purchases of renewable energy. It’s time to consider transitioning goals to 24/7 CFE—moving from net-zero to absolute zero, where every kilowatt-hour of electricity consumption is met with clean electricity sources. A report by Jesse Jenkins at Princeton University, “System-level Impacts of 24/7 Carbon-free Electricity Procurement,” found that 24/7 CFE goals have the potential to drive more significant reductions in carbon emissions than a 100 percent renewable energy match.

Join the 24/7 CFE Compact. The 24/7 CFE Compact is a global collective of corporations, governments, solutions providers, investors, and organizations working to decarbonize electric grids worldwide and advance clean energy for all—every hour, every day, everywhere. Wherever your company is on its climate journey, organizations that join the Compact will be part of a collective effort to share solutions, resources, and advocacy efforts to jointly advance 24/7 CFE. You can learn more at gocarbonfree247.com.

Advance the public health narrative. At the Obama White House, we found that the most effective way to talk about climate change is through the lens of public health, a finding backed by additional research. This is why I advise organizations—especially in the outdoor industry—to transition away from talking too much about nature, mountains, and glaciers. I even avoid using the term “planet” in my own communications (the planet will be here no matter what we do)—we’re really fighting to save our families, our neighbors, and our children.

Talking about public health in terms of pollution helps us widen the climate movement beyond the actively engaged. You’d be amazed at how many apathetic people start caring about climate change when they come to understand its connection to pollution.

Use your platforms for advocacy. Ensure your trade associations are advocating for climate policies on behalf of your industry. Publicly support climate policies at the national, state, and local levels. Engage your consumers. Activate your base. (Ed. note: The National Ski Areas Association actively advocates for various climate policies on Capitol Hill, which NSAA membership can support.)

A narrative that’s not being told in the climate movement is that there is an end-point, a promised land: It’s the zero-carbon economy of the future, and we are steadily moving toward it. But it requires all of us fighting for systemic change.

When the blame of the climate crisis started to be put on end-users, I started seeing the word “we” being used in concerning new ways. Ways that perpetuated the guilt and shame that is riddling people today. I shudder when I hear people say things like, “Look at the problem we have created! Look what we have done! Humans are terrible! We are terrible!”

This doesn’t fit my conceptualization of who we are. I see a better use for the word “we,” one that President Obama invoked on the 50th anniversary of the marches from Selma to Montgomery:

“The single-most powerful word in our democracy is the word ‘We.’ We The People, We Shall Overcome, Yes We Can. That word is owned by no one. It belongs to everyone. What a glorious task we are given, to continually try to improve this great nation of ours.”

This is the “we” I know. The “we” that reflects our innate goodness, our desire for solutions, and the earnest commitment we make to future generations. The “we” that works collectively to fight for systemic change, clean up the air for everyone, provide clean electricity for all, build the zero-carbon economy—and give our children back their future.

That’s what we are here to do. That’s the future we are fighting for. And it’s ours for the taking.