We Need Women in Operations

Female mountain ops pros are breaking into the boys' club. Here's why our industry will be better off with more women in the field. 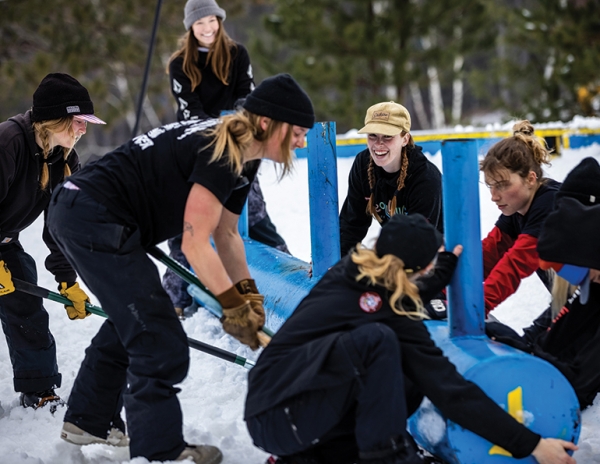 The all-female build crew, including author Marsha Hovey (third from right), at Take the Rake—a women’s terrain park meet-up at Trollhaugen, Wis., in 2021.

The maintenance shop at your ski area is likely a male dominated space—and likely always has been. Our industry’s complacency about that fact is starting to shift, though. The antiquated idea that manual labor and physically demanding roles are not suited for women is getting squashed on a daily basis. However, most ladies who are operating cats, running snow guns, managing park crews, and sitting at the head of the table for a weekly mountain ops meeting are rarely working alongside other women. More often than not, they are the token chick on the crew, or one of very few.

“Very few females apply for positions in [these] departments,” observes Susan Cross, general manager of Snowmass, Colo., herself a woman who spent years in operations as the Buttermilk, Colo., mountain manager.

Instead of asking why don’t more women apply for ops roles, we should be asking: How do we grow the number of women in ops and strengthen teams? How do we move forward so that every department better represents the voices within our industry?

And then, we better listen to the answers.

The work culture of most operations teams is not the most inviting place for women. Take it from some of the women who have been on the ground, like Maddy Pierce, snowmaking foreman for Copper Mountain, Colo.

“When I was entering the operations team at a big resort for the first time, I was kind of scared,” says Pierce. “From the outside, it seemed like a total ‘boys’ club’ with no, or very few, women.” Ah yes, the dreaded boys’ club culture—the one that we all know exists but dare not speak of for fear of ruffling feathers (ya know, the down feathers inside heavily insulated jackets).

“They seemed like a tight knit crew,” says Pierce, “and I was just some chick who wasn’t as big as them, probably not as strong as them, and I didn’t know what I was doing. Those things, from first glance, loom over you and are so intimidating. You are immediately discouraged before you even consider beginning.”

Narrow views. Despite that, women continue to take on challenging roles in operations, pushing past their internal voices of self-doubt, only to be greeted by external ones. There is still a narrow view of who these jobs are for. At the prospect of hiring female candidates, all too often I’ve heard excuses like, “I don’t want to have to change the way we talk in the shop because women are around,” or, “We can’t worry about hurting feelings and having girls crying around here,” and my favorite, “Women just don’t want to do these jobs.”

To those who espouse these old-timey views, I say it’s time to get out of your own way. If preserving the way you joke, speak, and deal with confrontation is more important than creating a welcoming space for new hires, well, your stack of applications is going to get shorter and shorter every year.

“‘That’s a man’s job’ is an old ideal that still rings true in mountain operations,” says Jess Goucher, terrain park and bike park supervisor for Jackson Hole Mountain Resort, Wyo. “In fact, when I was hired to park crew for the first time, the Instagram post introducing me read, ‘It’s a man’s job, but it needs a woman’s touch.’ Turns out, neither part of that statement is true,” which Goucher’s work creating terrain parks and dreamscapes for events like Natural Selection and others demonstrates year-round.

Added pressure. Whether it’s said out loud, or just a feeling that you get when you walk in a room, there has always been an added pressure to “prove” your worth as a woman making snow, building parks, running a cat, and just existing in operations.

“I feel like women have to work harder to show that they belong, that they are just as competent as the men,” says Judy Kaczor, grooming manager for Stratton Mountain Resort, Vt. “I remember being in a ski area management class in college and a guy mentioned a local ski area being leery of hiring women for snowmaking because they ‘just couldn’t do it.’ They were basing this off of one employee, one experience. I proudly spoke up and set him straight. Anything they can do, I can do, and other women can do, too.”

The constant need to demonstrate your worth and that you belong is exhausting. Add in the duties of operational jobs on top of that daily pressure, and it’s a heavy load for anyone to bear. To lessen the burden, “do your job and do it well, use all your resources, don’t just try to prove yourself, and be yourself,” advises Cross. “You’ll gain respect from colleagues.” As a team, eliminating the gendered workplace stereotypes that feed that pressure will help, too.

WHY WE NEED WOMEN IN OPS

There are other potential advantages, says Goucher. “Women are often very detail oriented, so you might even be surprised by the areas they excel in, questions they ask, and their different perspective on assignments and problems.”

Cross agrees with the long list of benefits to bringing women on board. Women bring “new perspectives, different ideas, different experiences, [are] not afraid to try things a different way and break away from the ideal ‘we’ve always done it this way,’” she says.

“In my experience, women bring a really logical and really approachable perspective to every problem and job, often with the most timid customer in mind,” says Pierce, who points out that this mindset can make a real difference in the guest experience by making parks, terrain, and the overall resort environment more friendly to women.

Reflect visitor demographics. With only men doing the work and making the decisions, the resort environment and guest experience is shaped only by the male perspective. Considering about 40 percent of our guests are female, a movement to diversify mountain ops teams is not only necessary, but critical.

HOW WE MAKE IT HAPPEN

There are many trailblazing women, including the ones I spoke to, who have been quietly forging a path for years, slowly making room for more women to feel welcome in these spaces. How does their presence impact the future of women in mountain ops? It’s a great reminder that representation truly matters. To see someone that looks like you, doing a job that you’ve never thought was for you, has a profound impact.

How do we keep moving in the right direction? How do we inspire more women to join in? We need to share women’s experiences, put faces to the women behind the scenes, and create teams and opportunities that are welcoming to all.

Awareness. Take the Rake, the first ever terrain park built entirely by women, grabbed the attention of industry insiders and customers alike this past December at Trollhaugen, Wis., and it created a tidal wave of awareness. We’ve seen spin off events all over the country and hordes of women now inspired to apply for park crew jobs they previously thought weren’t for them.

Left to right: Jess Goucher working on a terrain park feature in the shop at Take the Rake; Maddy Pierce (left) smiles at Copper after a rare day working with an all-female trail crew, including crew foreman Kristie Huff (middle) and Ashley Rohrbach (right); Judy Kaczor moving snow at Stratton.

No event is too small to be a catalyst for positive change. Something as simple as parking a snowcat at your base area and having male and female operators sit with guests in the cat to explain the functions of the machine could spark an interest in a part-time job.

Create opportunities. Participating in an empowering event can also have ripple effects. Of the 12 women involved in Take the Rake, two diggers immediately went home to their resorts and started operating snowcats for the first time.

It is vital to create opportunities to allow women, like their male counterparts, to grow in these roles. “The stigma of what is and isn’t ‘women’s work’ gets in the heads of both the men hiring and promoting and the women applying and working,” says Pierce. “Oftentimes, I feel I have to force opportunity and beg for a chance at certain tasks, when young men with similar or less experience just get it handed to them.”

Social content. Inspiring young patrons and making them aware that these roles are available is key to developing the next generation of mountain operations teams. Marketing and HR teams can use social media to share inspiring ops content—not just guest-focused material.

Start celebrating the wizards behind the curtain; let your followers know that, yes, women are making your snow, grooming your trails, building your parks, and these are their faces. “Our society has been based on gendered jobs for so long, but I think we are finally starting to break that mold,” says Kaczor.

To the women who have been eager to explore roles in mountain operations but don’t know where to begin, here are some words of encouragement from the ops ladies I spoke to for this article:

“Go all in head first. Be patient and persevere. You would be surprised by how many people do in fact think you’re capable and genuinely want to support you and better you. Hard work and positivity will get you really far.”

“Apply for a job and go for it! Don’t be afraid to give it right back to the boys and stand your ground. Show interest in these positions, and if you can do ride-alongs with cat operators, do it!” — Judy Kaczor

“Go for it. I love being in operations—there’s always something going on. Spending time in the field is exhilarating and exciting. And being part of the process that makes us better, and thus creates lasting memories for our guests, is very fulfilling.” — Susan Cross

“Absolutely go for it! Find available positions at your local mountain and apply for them. Spread the word that you’re interested. Be honest about what you don’t know and embrace it so you can grow. Physically and mentally, these jobs are draining, but the reward is high. The mountain is your office!”