Snow King Mountain and Sundance Resort have made hugh investments in nearly every aspect of their operations in order to secure their long-term success. 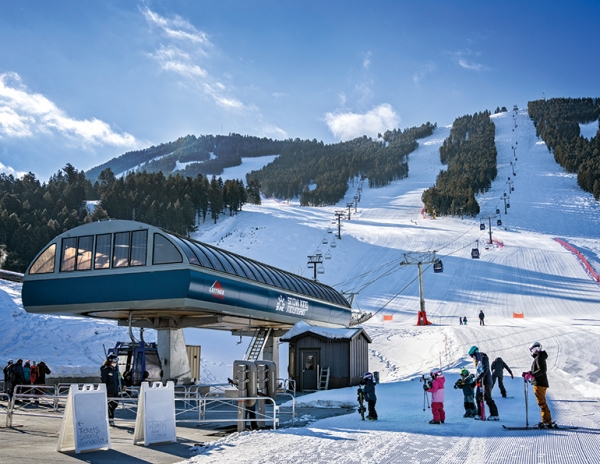 It’s a watershed moment in a resort’s life: The time to go all-in on capital investments and level way up. But how does a resort know it’s the right time? What projects need to happen? What’s the return on investment going to be? Is the capital outlay—and the blood, sweat, and tears that come with managing multiple projects at once—worth the risk?

SAM spoke with leaders at two mountain resorts that are undergoing comprehensive transformations—Snow King Mountain in Wyoming and Sundance Mountain Resort in Utah—about making big changes with confidence, balancing the new with the beloved, and setting a ski area up for long-term success.

There was a time when Snow King, hovering just above the bustle of downtown Jackson, was truly the King. “When it was the only game in town, it was easy to be successful,” says the ski area’s general manager, Ryan Stanley.

But as neighboring Jackson Hole Mountain Resort grew over the years, that changed. “In time, less and less people had Snow King on their radar,” he says. “Even the locals were going out there [to Jackson Hole]—it was definitely dire.”

Back in the early 2000s, investments into the resort were minimal. The real estate crash of 2008 forced the sale of the resort’s hotel. But in 2014, there was an ownership reorganization and recapitalization that was led by majority shareholder Max C. Chapman Jr., and everything changed. “That new group has funded all the improvements on the mountain since that time,” says Stanley—improvements that have the resort’s long-term success in mind.

A huge deal. Now, Stanley is overseeing a massive infusion of cash to make Snow King thrive again. Winter and summer, improvements are being added at a fast clip, with tens of millions of dollars being spent for better snowmaking, lifts, dining, summer fun, and more. 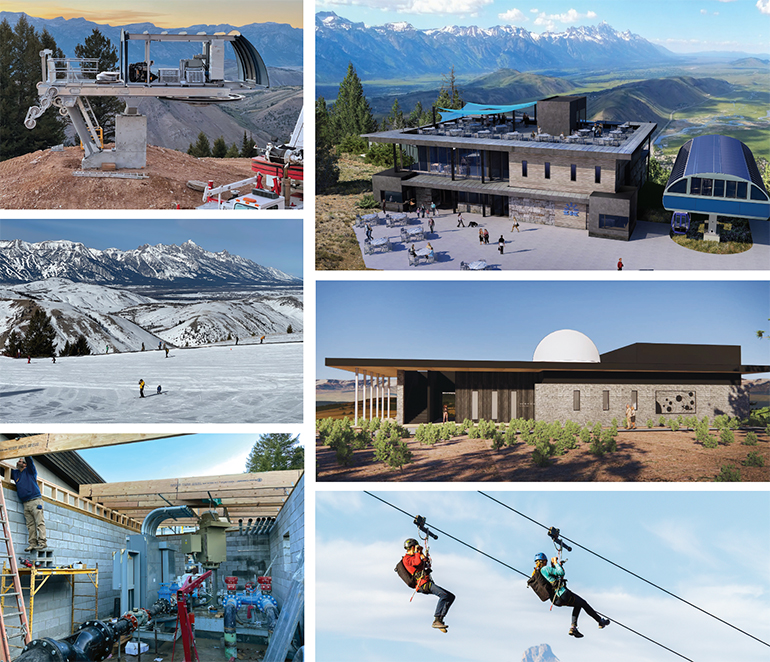 It’s a huge deal for a smaller place, Stanley says. “We had to reinvent from scratch. Ten years ago, we were losing a million dollars a year, so it was change or die.”

Thus began what he believes may be one of the largest small-mountain upgrades ever. “If it was Vail spending $35 million, that’s one thing,” he says, “but for who we are and what we’ll do, this was a massive undertaking.”

The investments stem from a comprehensive plan that aims to make the resort a place more people want to frequent in summer and winter. Last winter, after what the resort called the “summer of the construction zone,” Snow King debuted an entirely new look.

New additions. A new eight-passenger gondola from Leitner-Poma of America replaced the old summit double, cutting the base-to-summit ride time from 17 minutes to less than five. To make room for the gondola, the bottom terminal of the Cougar Lift—a nearby triple— was moved 250 feet up hill and an old snowmaking pumphouse was removed. A new beginner teaching zone with two SunKid conveyors was created at the summit, giving newbies breathtaking views and a dedicated learning environment. A new Skytrac fixed-grip triple was installed on the south side of the mountain as well, providing access to about 100 acres of new, mostly intermediate terrain.

The snowmaking system was upgraded with a new pumphouse, tripling water capacity, and expanded to cover the new south side terrain, among other snowmaking improvements. Plus, Snow King added a new three-span ZipRider zip-line tour with a total length of 4,300 feet.

Incredibly, all of these projects occurred in 2021. A late start to winter 2021-22 actually helped. “It was lucky because we were still doing construction” into November, says Stanley. In the end, he says, “It’s all come together in a spectacular manner.” And the initial response from guests has been positive.

Next phase. The resort isn’t done, either. Look for a mountaintop restaurant to open in a year or so. An observatory will break ground sometime in the summer of 2023 as well.

Stanley hopes they’re striking the right balance between keeping the local folks happy with the hill and offering experiences that tourists want to savor.

In the winter, with more skiable acres, new lifts and learning terrain, a lower cost pass than Jackson Hole, as well as a storied past (it’s been the hometown racing hill for 87 years), Stanley hopes Snow King continues to draw more guests.

This summer, the new gondola, hiking trails, zip line, and other updates—all easily accessible from the town of Jackson, right at the base of the resort—should be a draw, and fill an important need, says Stanley.

“People are in cities so much, they don’t get out and recreate the same way [that someone who, say, lives in a mountain town does],” he says. “Resorts need to expose people to outdoor experiences in a protected manner. That’s the niche we need now. We are not all going from zero to hero in the outdoors.”

All in. What gave resort leadership the courage to go all-in on investments and improvements?

“It’s a leap of faith,” Stanley says, “but our location here is what makes us unique.” He’s referring not only to Snow King’s in-town address, but also favorable snowfall as climate change progresses, noting that the Tetons and the Jackson area seems to be getting more snow overall than other locales. “So, we may be around longer than most others.”   cont. >>

Purchasing a family-owned ski resort demands a deft touch—loyalists tend to want to hold onto the vision and vibe of their “owner families” long after those families are gone. When the owner family includes one of the world’s most beloved actors and mountain conservationists, that challenge kicks up about a gazillion notches.

That’s just what Broadreach Capital Partners and Cedar Capital Partners took on when the two real estate investment firms acquired Utah’s Sundance Mountain Resort from Robert Redford and his family. The companies are charged with protecting a vision held dear by many while updating and growing to meet the needs of guests.

While the Redfords are no longer the owners, president and general manager Chad Linebaugh not only worked at the resort under the Redford family, but he has also skied there since he was seven years old. Linebaugh understands the resort’s history and what it needs for a successful future as well as anyone.

Visions aligned. Linebaugh says the timing of the sale, in late 2020, was the right time not just for a new team to infuse capital for improvements, but for the Redford family to pass-on ownership—the right way.

“The best way to describe why the Redford family sold when they did is to know they all said this: ‘Owning Sundance or any land is not a privilege, it’s a responsibility,’” he says. “They did it so well for 51 years, but they reached a point for them and at their ages, along with the need for an improvement plan, that it made sense to pass this on.”

A good sign came quickly: The Redfords and their management team, without giving input, asked the incoming owners what they’d do first. The new owners’ list—replace lifts, improve the trails, and overhaul the snowmaking—mirrored the Redfords’.

“We knew they completely embraced the Redford vision,” recalls Linebaugh.

The upgrades. The new ownership dove in fast, being sure to pay mind to what loyalists wanted to hold onto while giving them what they may not have realized they need. This past winter debuted two new chairlifts, an entirely new beginner area, upgraded snowmaking, additional parking, and improvements to many of the base area buildings.

The result? “We had huge expectations, and we surpassed them,” says Linebaugh.

First up was replacing Ray’s Lift, the main chairlift from the base that, Linebaugh says, was a “25-minute lift on a good day.” 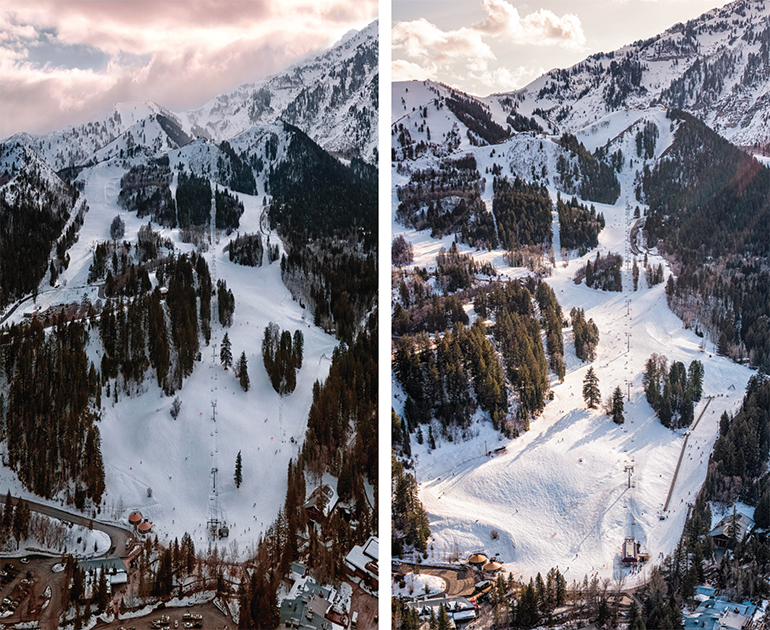 “Some people were so sad to see it go,” he says. “Ski folks are sentimental.” But the new Doppelmayr detachable quad is not only faster—it runs about seven minutes to the summit—it also goes 300 vertical feet higher, landing guests where one of the two doubles that Ray’s replaced back in 1995 used to drop lift riders. Skiers and riders can once again access backside trails and more terrain from that lift—and even lovelier views.

Importantly, the new lift also contributes to a reimagined beginner experience at Sundance. Its mid-station stop ferries progressing beginners from the base to a re-graded area with easy access to green terrain.

“This was the biggest surprise,” Linebaugh says. “The response for the beginner area has been incredible. We went from, to be honest, being one of the worst [setups] for beginners to being one of the best.”

Before the upgrade, beginners hiked up a little bit to then ride a rope tow. “Rope tows can be charming, but—it’s just one of those experiences we, and anyone out there, didn’t love,” says Linebaugh, who calls the reimagined beginner experience “a complete game-changer.”

Snowmaking overhaul. Dramatic snowmaking improvements were also game-changing. The resort went from running 10 fan guns pumping a max of 800 gpm, to a new 20-million-gallon snowmaking reservoir and a new pumphouse with a capacity 3,600 gpm that feeds nearly 80 new HKD fans and sticks. “We revamped and truly started over,” Linebaugh says. “It’s state-of-the-art now.”

The benefits of the upgrades were clear from day one.

“I’ll never forget the first day [we made snow] in December,” he recalls. “I saw the amount of snow we were able to make in one day, and I knew we’d done the right thing. We used to just be able to get patches at a time. Now? We can do multiple trails.”

There’s more coming, too. Next winter, Sundance will open a new “mid-mountain pod,” offering 15 acres of novice and intermediate skiing on south facing terrain accessed by a new fixed grip quad. This area will be a focus of early-season snowmaking to help spread out skier traffic.

Parking strategy. To better accommodate guests, new parking spaces were added, and the resort debuted a paid parking plan last winter to encourage more guests to carpool: Solo drivers pay $20 to park, cars with two passengers in them get 50 percent off, and cars with four or more passengers in them park free.

“Our strategy was not to make money,” Linebaugh says. “It was really for the greater good.” He believes it’s working—and they’ve had less traffic and few complaints so far.

Linebaugh says they know it’s wise to stay ahead on that—because more traffic may be coming. Nearby Provo Airport just completed a $50 million upgrade, and Allegiant and Breeze Airlines will be offering direct flights from bigger cities like New York, L.A., San Francisco, and more.

“That’s 19 miles from us, so we will be the resort closest to an airport in Utah,” he says.

Summer ops. The various improvements will also help feed summer operations, a season to which Sundance is no newbie, Linebaugh says. “Sundance was years ahead on this. We identified summer as a huge opportunity 30 years ago.”

The new detachable will provide faster access to hiking and biking trails, including some new “flow style” mountain biking trails.

Looking ahead, Linebaugh says they have a plan, as yet unfinalized, to increase the base area lodging with more cottages (there are about 40 now) and add an “Inn at Sundance” with about 50 rooms at the base. “All will be built with the Redford vision,” says Linebaugh. “Lower than the tree line, no ‘big hotel’ feel.”

“We’re forever evolving,” he says, but one thing the resort doesn’t plan to change is its independence, something the Redfords loved and the community embraces.

“With all due respect to the biggest brands—and they have an important place—I think there’s just something so special about an indy resort,” says Linebaugh. “We’re really proud of our independence, and we’re going to continue to embrace it.”