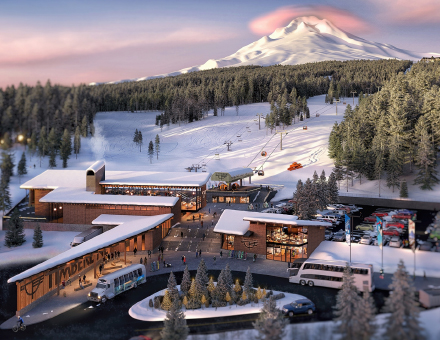 The plans include a two-stage gondola that would provide game-changing direct, aerial access from the Summit Pass base area to Timberline, upgraded Summit Pass facilities and parking, and a new mid-station.

While the United States Forest Service (USFS) has accepted the SE Group designed plan, the plan still faces a multi-step approval process. “Our 2022 Timberline Master Development Plan was recently reviewed and accepted by the U.S. Forest Service. While it does not approve any of the concepts held within, it recognizes that they are consistent with the Forest Plan,” explained president and area operator Jeff Kohnstamm.

The plan is part of a strategy to in part address “transportation issues such as a lack of parking on the mountain, access challenges, and traffic congestion.” Key to that strategy is the development plan’s cornerstone project: the two-stage gondola.

Summit Pass, which sit directly below Timberline on the south slopes of Mt. Hood, was acquired by R.L.K and Company in 2018 and merged with the upper mountain in July 2021 to offer a combined 4,540 vertical feet, the longest in the United States. There is currently no lift connection between the two ski areas, though. The proposed 10-passanger gondola would rectify that.

The gondola would be a top-drive with an hourly capacity of 1,800 people per hour, and would include a mid-station with access to an area of beginner terrain with surface lifts as well as other programming, like camping sites or yurts and a potential tubing area. It would originate adjacent to the existing Summit Pass chairlift bottom terminal and terminate at a top terminal adjacent to the top terminal of the Jeff Flood Express, providing direct access to the upper mountain for guests and employees.

A new 20,000-square-foot lodge at Summit Pass would include restaurant service and seating, ticketing, ski school, retail, restrooms, a daycare center for guests and employees, and a deck with additional seating and direct access to the planned gondola and the Summit Pass chairlift.

Pending USFS approval, other provisions in the plan include an upgrade to the Summit Pass chairlift (a 1980s fixed-grip double), the addition of several new surface lifts, upgrades to the terrain network, construction of the Molly’s Portal Day Lodge on the upper mountain, expanded maintenance facilities, snowmaking, night lighting, utilities, and ski patrol facilities.