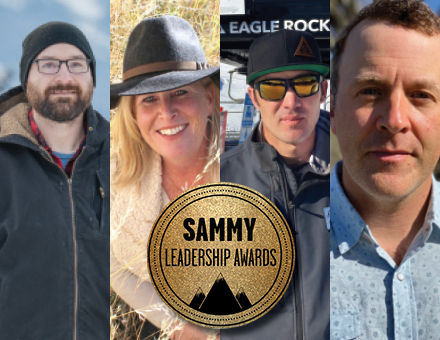 These four were nominated by their peers, who praised their leadership throughout the pandemic as well as their accomplishments before it.

Since 1998, the annual SAMMY Leadership Awards have recognized leaders in the mountain resort industry who, at mid-career, demonstrate the passion, involvement, work ethic, entrepreneurship, and creativity that will shape our future. Congratulations to the class of 2021!

A special thanks to the SAMMY Award sponsors, Leitner Poma of America and Safehold Special Risk. They have supported this important recognition of our current and future leaders since the SAMMY’s inception 23 years ago.

Katie has served in a variety of roles in the broader Steamboat community; she currently serves on the Steamboat Springs Chamber as past president. She is passionate about leadership, and in women's programs and advancement specifically, also serving as a mentor for the Young Professional Leaders in Steamboat through the Chamber.

Her nominators praise her leadership at both the resort and in the community. For example:

“Katie Brown is the truest sense of a leader. ... she not only wants to explore how to include more skiers and riders, but also to identify up and coming leaders to mentor and guide. She has been especially essential in promoting and coaching female leaders both inside and outside the resort.”

Read Katie’s full bio and more from her nominators.

Robert McClendon first started working at Tahoe Donner Downhill Ski Resort at age 14 in the rental shop. He has effectively, enthusiastically, and efficiently helped improve the ski resort ever since, coming into his current role as ski area manager in 2007. He is motivated by using technology to improve the operations of this small ski resort in big ways, and has helped to mold Tahoe Donner’s family-friendly dynamic through the development of extensive employee training and safety programs. All that explains why Tahoe Donner has seen a steep and beneficial increase in both revenue and visitors in recent years.

As a member of the Ski California board of directors, Robert has developed classes for the association’s Lift Maintenance and Operations Education Conference.

“Not only is he a leader, he is often a coach, helping managers rise to the occasion, be better at what we do, increase our role in the industry, and stay aware and in practice of industry standards.”

Read Robert’s full bio and ore from his nominators.

Jon Schaefer began working at Berkshire East on June 10, 1980. He was born the day before. After a ski racing career, he returned to Berkshire East full-time in 2010, gradually taking the reins. He influenced the resort and region with year-round innovations and modifications to the business by aggressively expanding summer operations and developing renewable energy sources to power 100 percent of Berkshire East’s needs. In 2018, the Schaefers purchased Catamount Ski Area and began a complete renovation of the resort.

In March 2020, Jon made Berkshire East and Catamount the first mountains to close as the pandemic struck. Two weeks later, his team started Goggles for Docs—a cloud-sourced PPE effort that delivered almost 60,000 ski goggles to healthcare workers around the world. Jon and Goggles for Docs co-founder Mike Halperin (an ER physician) were named to Outside Magazine’s list of “Outsiders of the Year.” Jon then co-chaired the Outdoor Recreation reopening committee for the Commonwealth of Massachusetts, helping to write operating guidance that spanned activities from zip lines to beaches and mountain biking—and skiing.

“Jon has proved to be a visionary leader, with the grit and determination to make difficult dreams a reality. He has proved that independent, small family-run ski resorts can survive, thrive, and be strong force for change within the community.”

Read Jon’s full bio and more from his nominators.

Christian Théberge is the general manager of My Mountain Coop (MMC)-Shames Mountain in British Columbia—a remote ski area powered only by its on-site generator and famous for deep snow and backcountry access. He began in October 2011 as the first GM of MMC-Shames Mountain after it moved to a non-profit cooperative ownership model, the first of its kind in Canada. Previously, Christian was general manager of the non-profit Phoenix Mountain in Grand Forks, B.C.

His nominators cited his many leadership qualities, creativity, and selflessness. Said one:

“Few leaders at a young age embody the creativity and problem-solving abilities of Christian Théberge. In 2011, Christian took on the enormous challenge of saving a community ski area ... Over the past 10 years, Christian has led the replacement or renovation of much of the mountain’s infrastructure, primarily funded through sponsorship and fundraising.”

In 2018, Christian received the CWSAA Lars Fossberg Excellence Award, presented annually to an outstanding manager or supervisor of the next generation.

Read Christian’s full bio and more from his nominators.