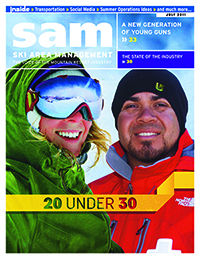 About five years ago, there was a general feeling among top managers that the resort industry faced a looming succession shortage. Guys (and it was mostly guys) looked around after 25, 30, or 40 years of running their resorts and they didn't see many folks capable of replacing themselves when they retired.

Now, some of that was surely ego; we're talking about Boomers, after all. But in fact, the industry had not done a good job of identifying the next generation of leaders.

We at SAM had been highlighting young(er) leaders through our annual SAMMY awards-this year was the 13th for the program. But we realized that we could do more to expose future leaders to a wider audience.

In visiting resorts, attending events and generally being out and about, we knew there were talented young people making their way in the industry. So in 2007, we launched the Top 10 Under 30 (ish), a call to the industry to tell us about its brightest young stars. Nominations trickled in that first year, but the following year we received triple the amount of nominations, and this year the submissions increased even more. It's become so popular, in fact, we decided to expand the list to 20 outstanding individuals.

To challenge their ingenuity, we asked this year's group to describe themselves in six-word bios. The answers are insightful, funny, inspirational and, above all, illustrate the devoted passion these young folks have for the mountain resort industry.

And we also decided to get you, the readers, involved. We want you to weigh in on this impressive group. SAM and NSAA have teamed up to give the winner free registration and accommodation to the NSAA conference in May 2012 and a lifetime subscription to SAM. Everyone who votes will be entered in a raffle to win a Skull Candy 50/50 headset and a SAM beanie.

We also invite you to tell us about your own rising stars. It's a great way to recognize and inspire them. And they may just work their way into the next SAM celebration of Young Guns.

Explore the hall of fame of past honorees, some of whom you might recognize as current leaders in the industry!

Subscribers can read their full profiles in the SAM Digital Archives.