A Peak, Even Epic, Year to Remember

The best snow in years and the explosion of multi-area passes push visits to new highs. 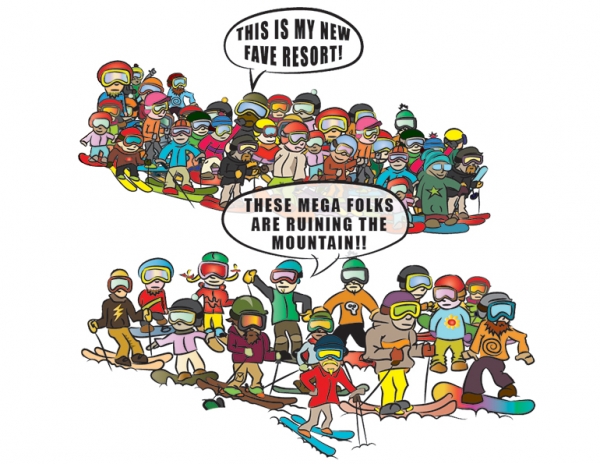 Multi-area passes collided with massive snow in the West and steady temps in the East. That helped lift the U.S. ski industry to a likely record season. But the growing hordes angered many longtime locals, and left resorts trying to find the right balance.

“Locals are not pleased,” admittted Anna Cole, communications manager at Jackson Hole, Wyo., where the new Ikon pass added 8 percent net incremental visits, with total visits up 11 percent as of mid-March. “Introducing Ikon in a massive snow year, we’ve been bombarded from every angle. We’re trying to find the balance, what the new normal is.”

Blame it on the Ikon. Or the Epic. Or Peak Pass. (Lots of local/longtime passholders did.) All across the country, the new normal is in flux, thanks to those multi-area passes. The bottom line, though, is that visits rose at many areas.

In Vermont, the new normal is former rivals, now Vail-owned sister resorts Stowe and Okemo, sending skiers to one another. On blackout days at Stowe, the resort suggested skiers head south to Okemo or Sunapee, N.H., both also on the Epic Local Pass but with no blackout days.

“It was a bonus for [Okemo],” said Bonnie MacPherson, Northeast communications manager. “We saw some extra visitors on those blackout days.”

If the multi-area passes brought more people out skiing more days this winter, so did the weather. Except for a few hiccups, the entire country enjoyed seasonal temps and lots of snow.

West: Too Much of a Good Thing?
Snow returned to the West this season with a vengeance. As Mike Reitzell, president of Ski California, said: “We’re getting dumped on like nobody’s business.”

But the record snow also caused huge problems: Closed roads, getting areas open, getting skiers and employees to the slopes, lost parking spaces, and avalanche danger.

“When you have days, weekends when just about every resort is closed because of the amount of snow, it has an impact on overall skier visits,” Reitzell said, predicting only above-average skier visits despite the record snow up and down the state.

After a slow start in the Pacific Northwest, snow fell often and everywhere, resulting in an above average year there as well. Ditto in Utah, which finally got an above-average snow year after six out of the last seven were below average. By March 11, Alta, the state’s snow barometer, had 462 inches, 110 percent of its 40-year average.

In Colorado, the snowpack was 122 percent of average, and visitation was also running above average.

Ikon raises traffic, and tempers. But not everyone was happy. The snow brought traffic and parking problems at many resorts. Traffic was magnified on-hill by an influx of new skiers on the Ikon and Epic passes. Alta, for example, a limited Ikon partner, saw a three percent net increase in skier visits from Ikon/Mountain Collective. Local passholder visits, meanwhile, were up 13 percent, making for lots of complaints about overcrowding and congestion. Most of those complaints blamed Ikon for the crowds.

“The widespread uptick in skier visits across the country suggests that demand in a snowy year may be greater than the supply in some regions of the country,” said Mike Maughan, Alta GM. “We are closely monitoring the impact multi-resort passes are having.”

Jackson Hole, which had its second snowiest month ever in February (193 inches) and was on record pace for visitors, is also closely monitoring the impact of multi-area passes. Record crowds were exacerbated by record snowfall, which created traffic and parking and other problems.

Buckley said the resort will make changes in the future to mitigate overcrowding, including eliminating some promotions, raising pricing on multi-area passes, and limiting discounted and complimentary tickets. Other measures will include more parking, more shuttles, and more onsite employee housing.

Midwest: Much Improved
“For most ski areas, this season was an improvement over the last couple of years,” said Amy Reents, president of the Midwest Ski Areas Association. “We had record snow in February in some of our strongest states—Michigan, Minnesota, Wisconsin. I don’t think anybody is saying ‘best year ever,’ but I think numbers are up for most people.”

Multi-area passes also had an impact in the Midwest, but mostly on the sending end.

Epic season. “The Epic Pass has given our local guests access to the West with all the different options it has,” said Jason Knight, marketing director at Mt. Brighton, Mich., one of three Midwest Vail properties.

“Vail did a $13 million renovation when it acquired us three years ago,” said Rachel Muhlenbeck, marketing director. “In the Chicago area, a lot of folks go West to ski. We’re a great option for them, a local place to come and learn, get some runs in, and then head West.”

Peak season. Paoli Peaks, Ind., did not open until Jan. 8. But as one of six Peak Resorts properties in Indiana, Missouri, and Ohio, it got a bump from its sister resorts and will finish with average visits.

“We noticed quite a bit more visitors from other resorts and our sister resorts than in the past,” said Sylvia Crick, marketing director. “They just really enjoy that variety.”

Snow Creek, Mo., also owned by Peak Resorts, had a “fantastic” season, but probably due more to snow than its Peak affiliation. “Our nearest sister resort is five hours away,” said Darin Pond, director of guest services. “When it snows, people come out to ski whether it’s here or somewhere else.”

East: “We’ll Take It”
An early start, no prolonged thaws, busy holidays and a strong finish lifted the East to an above-average season.

“This was one of the steadiest winters in a long time,” said Greg Sweetser, executive director at Ski Maine. “A very solid season.”

Cold temps and early snow got the season off to a fast start. Mount Snow, Vt., fired up its new snowmaking system and opened Oct. 27, its earliest ever.

“We made a commitment to snowmaking and being an early season player in the East,” said Jamie Storrs, communications director. “It really paid off. We were able to open more trails faster than ever before, and bounced back very quickly from any adverse weather events.”

Statewide, Vermont has fallen below 4 million skier visits for the last three years, but that slump will end this year. “Everybody’s up, some potentially best year ever,” said Molly Mahar, executive director at Ski Vermont. “Our 10-year average is 4.13 million. We’re substantially ahead of that. It will all depend on how March plays out.”

March Madness. For much of the East, the early indicators for March were good. “The first 10 days of March were probably the best conditions of the season,” said Tom Meyers, marketing director at Wachusett, Mass., which was on pace to hit its five-year average. “We had cold temps, 13 inches of snow, some of the biggest crowds of the season. We gained a lot of ground in March.”

And despite concerns about the impact of the multi-area passes, Meyers said Wachusett’s early season pass sales were strong.

Despite receiving less than 100 inches of snow, Snowshoe had an above average season, thanks to its new $4 million snowmaking upgrade.

“Snowmaking more than paid for itself,” said Cassell. “We’ve had 60 out of 60 trails open since the end of January, and extended our season a week to the end of March. If you just looked at snow totals, you’d think it was a down year for us. It was a little above average.”

Ditto at Cataloochee, N.C., where GM Chris Bates described the season as “up, down, all over the place, but at the end of the day, above average.”

“We didn’t break any records, just a good solid year,” he said. “Top three or four. I’d take a year like this over and over.”