Without the Learn to Ski and Snowboard Month initiative to drive awareness, resorts are taking new approaches to promoting entry into winter sports. 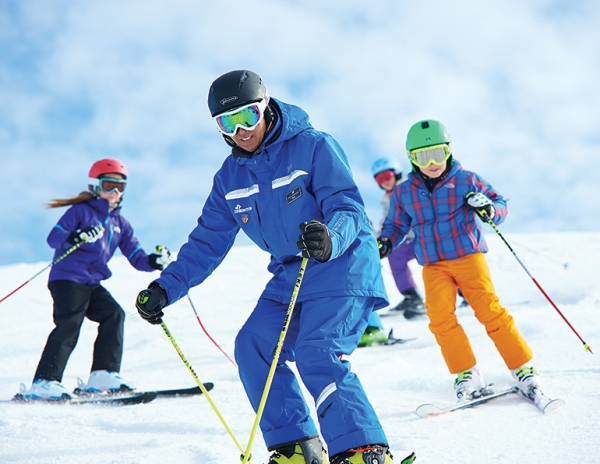 Mt. Brighton, here, takes part in Discover Michigan Skiing, which will run during the entire month of January for the 27th year.

After 11 years of luring never-evers into winter sports, the January-focused Learn to Ski and Snowboard Month (LSSM) is, for all intents and purposes, no longer a structured initiative. In its place, NSAA is promoting a broader “discover snow” effort designed to reach more segments of the market, including beginners as well as core, lapsed, and revival participants.

“We’re encouraging state associations and resorts to continue with the LSSM effort if it’s working for them,” says NSAA president and CEO Kelly Pawlak. “As an industry, we’ve done a good job getting a lot of information to ski areas and never-evers. But what makes sense for one ski resort may not make sense for another. January worked for some and not others. Beginners were a good focus for some and not others. We realized there may be other segments where we need to dig in.” (See p. 16 for more on this.)

Targeting all segments. Pawlak points to the eight million skiers who have dropped out of the sport in the last 10 years as one example. “What are the best practices to capture some of those lapsed skiers and revivals, keep them engaged and get them back in the core? That’s what we want to find out,” she says. NSAA plans to conduct research into these questions.

At press time, NSAA was set to unveil a new website, discoversnow.org, on Nov. 1, where resorts and states can list their learn-to and other offers.
While that effort is underway, resorts are using this transition season to continue with their own established or new lesson programs and products, some in January, some not. Here’s a brief look at a few:

Raelene Davis, VP of marketing at Ski Utah and one of the founders of LSSM, “absolutely supports” NSAA’s new growth initiative. “I’m willing and able to support any program NSAA puts forward,” says Davis. “I don’t think growing the sport is limited to never-evers, or any age or generation. There’s not an easy solution. Until NSAA develops a new program, I think we all need to move forward with what’s working for our own region.”

Carrying the torch. In Utah, Davis says resorts will continue with January LSSM, focusing as a state on the fourth grade learn-to-ski and -ride program, a six-week introduction to skiing and riding in PE classes. “We’ve put upwards of 10,000 kids through that program every year,” she says.

Single-day focus. Mountain Creek, N.J., will continue with a single learn-to-ski and -ride lesson day in January. The lesson day, with a free or nominal cost, began five years ago at several resorts as a way to kick off the January LSSM.

“It’s been very successful for us at Mountain Creek,” says Hugh Reynolds, SNOW Operating VP and the creator of the national learn-to-ski and -ride lesson day. “We average more than 200 attendees. We plan to continue it this year.”

Other resorts will keep tried and true January lesson promos. Michigan resorts will again offer a $35 learn-to lesson package ($20 XC) in January.
Discover Michigan. “Our ‘Discover Michigan Skiing’ runs the whole month of January,” says Mickey MacWilliams, executive director, Michigan Snowsports Industry. “We’ve been doing it for 26 years. It predates LSSM.” She says an average of 6,000 sign up for the one-time lesson package at 29 participating resorts.

January packages. The emphasis on January has made the month the busiest for lessons at Crystal Mountain, Mich., says Brian Lawson, PR director—8 percent higher than February, and 30 percent higher than December. The resort’s January learn-to-ski and -ride passport is the best deal—a three-lesson package for $99. Participants who complete all three lessons by Jan. 31 can buy a Premier season pass for $99, and also receive a $100 voucher toward the following season’s pass or for additional lessons. Crystal also offers a one-time, $39 lesson package in January.

Take 3. Vermont will continue its popular January “take 3” lesson promo for $129, says Adam White, communications director at Ski Vermont. Participants can redeem all three lessons at one resort or different resorts. Of the nearly 300 who completed all three lessons last year, 91 percent said they planned to go skiing or riding again this season, and 71 percent said they planned to take another lesson.

Discover NY. Scott Brandi, president of Ski Areas of New York, says many individual resorts will continue with their own learn-to promos this season. As a state, he says New York may offer a second “Discover NY” ski day, which has a learn-to component. “Over 5,000 skiers participated last year” in Discover N.Y. day (Jan. 19, 2019), Brandi says, which makes a second such day seem worthwhile. New York will also continue to grow its third and fourth grade ski free program.

Others are taking a different approach. This year, Jay Peak, Vt., will unveil two new season-long lesson products it introduced on a limited basis last year. The first is a Norwegian concept known as “vennedag,” or, “friends ski.” Instead of grouping lessons by skiers, riders, age, ability, etc., Jay will offer lessons to mixed groups of friends and families.

Vennedag. “One of the barriers to entry is fear of loneliness and isolation,” says director of communications JJ Toland. “Instead of fracturing friends and families, a group and one or two instructors can explore the mountain across skill levels. It pushes them to terrain they might not try otherwise, and speaks to the innate sense of belonging.”

How does “free” sound? Jay will also bring back “free guided discovery,” which capitalizes on afternoon instructor availability. Beginners who arrive before 11 a.m. can get rentals and ride the carpet for free, and ask onsite instructors in the learning area for free pointers. At 1 p.m., they can either return the gear or buy a discounted lesson package for the afternoon. Toland says Jay saw a 28 percent bump in afternoon lessons from the program last year.

At Purgatory, Colo., any guest who purchases a day ticket can get a free lesson to go with it. “We had a lot of takers,” says J.B. Brier, ski and snowboard director, although the resort didn’t track numbers.

Follow-up incentives. In addition to better data collection this season, Brier says Purgatory plans to offer more pathways for continuing participation after the guest’s initial visit. “It might be a coupon to come back the next day, maybe a discount on a private lesson,” he says. “We’re going to do it all season long. Why limit it to one period of time?”

Another innovative learn-to product is Brian Head (Utah) University. Graduates of the three-lesson package get a free season pass for the rest of the current season, 50 percent off a pass the following season, and 25 percent off the third year, plus 20 percent off soft goods. Over the last five years, Brian Head U has graduated 829, with 302 purchasing a second-year pass, and 136 buying a third-year pass, says communications director Trace Whitelaw.

This season, Brian Head will offer any guest who takes a beginner lesson seven days to book another lesson at half price. If no lesson is booked by then, the guest receives a discounted lift ticket voucher. Brian Head will also introduce a Bring a Friend, 2-for-1 lesson.

Make learning easy-er. A year ago, Beech Mountain, N.C., switched its learn-to-ski and -ride promotion to February, because January has become such a strong month at the resort. The new timeframe was popular with guests, says marketing director Talia Freeman, but Beech this year is doing away with all special lesson deals. Instead, it’s pushing learn-to all the time.

“We’re going to focus on streamlining what we already have, and better informing guests about the programs,” she says. That’s because, she adds, guests want “easy” more than deals. “They want to buy a lesson online, and have an easy and efficient process when they get here. We’re trying to put ourselves under the microscope and make the process as easy as possible.”

One of the most exciting developments happening this fall is the opening of the new indoor ski facility, Big SNOW, at the American Dream retail and entertainment complex at the Meadowlands, N.J. Big SNOW, created by SNOW Operating, which pioneered terrain based learning, will offer a two-hour all-inclusive (equipment, outerwear, helmet) lesson for $70. The facility will also sell slope access and private lessons to more experienced skiers and riders, and will connect visitors to local resorts near their hometowns.

“We’re projecting to do more than 400,000 skier visits annually, more than 250,000 beginners,” Reynolds says. “To increase volume by that amount with one facility is pretty unprecedented.”