After a tragic accident, Sugar Bowl and the Henderson family have crafted a wide-ranging safety program for young children. 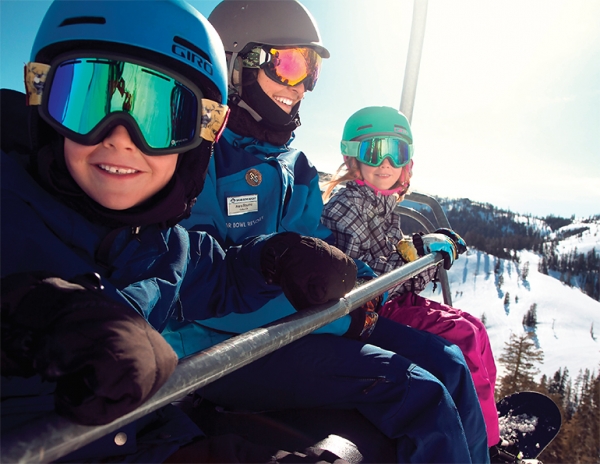 As part of Sugar Bowl’s Kids on Lifts program, kids less than 55 inches tall can’t ride lifts without an adult or older teenager.

Losing a child is often said to be the greatest tragedy one can experience. The impulse of many stricken parents is to look for a way to give the horrible event some positive meaning. Few achieve that goal as successfully as Helen and Mark Henderson of Davis, Calif. When their 7-year-old son, John-John, died in 2011 after falling 60 feet from the Mt. Lincoln Express chairlift at Sugar Bowl, Calif., the family made it their mission to increase ski lift safety for all children, at their home resort and across the country.

The Hendersons own a home in Sugar Bowl’s mountain village that, like Zermatt, Switzerland, is cut off in winter from auto traffic. After the accident, they began working with resort owners and management on creating a safety program with lasting value for both guests and operators. And they succeeded: The Kids on Lifts (KOL) program at Sugar Bowl is now one of the industry’s most comprehensive.

Greg Dallas, who became president and CEO of Sugar Bowl in 2015, says that working with the family was a priority of his from day one. Prior to coming to Sugar Bowl, Dallas was chief operating officer at Mammoth Mountain, where he had worked on that resort’s children’s lift safety program.

“The Hendersons have been wonderful to work with,” says Dallas, “and we’ve involved them every step of the way in the development of Kids on Lifts.”

Communications. The communication program is extensive. It involves online videos, messaging, and signage around the resort, at the lifts, and on lift towers for guests to read during their ride up. One key pre-loading message: “You must be 55 inches tall to ride alone.” Those under 55 inches, the U-55s, must ride with an adult or an older teenager. Height gauges are part of prominent KOL signage in all the chairlift mazes. U-51 was the criteria used previously, but Dallas says U-55 is a better indicator of the height of kids age 7 or younger, which the program targets. 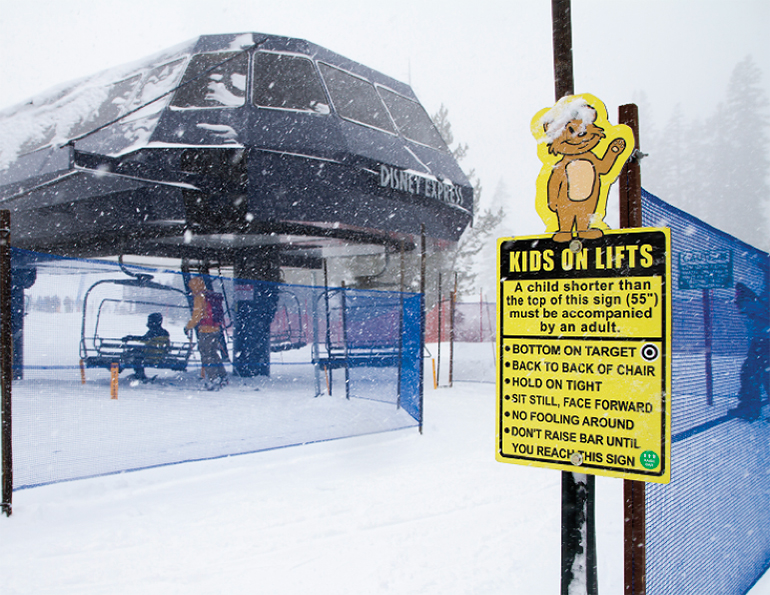 Signage for the Kids on Lifts safety program is incorporated througout Sugar Bowl’s operations, including these dual-purpose signs at maze entrances that clearly state guidelines for kids’ safety and also serve as a measuring stick to determine whethor or not kids are tall enough to ride by themselves.

For some guests, the education begins on Sugar Bowl’s website. It includes an emotional four-minute video about the event that claimed John-John’s life, the Henderson family’s journey, and the components of KOL.

Operations. At the resort, KOL is integrated into multiple areas. Parents might first become introduced by programming playing on TV screens at the resort’s two entry portals and lodges, or in printed handouts available nearby.

At the lifts, Sugar Bowl aims to identify small children who may have difficulty loading and pair them with an adult. As U-55s load the chair, operators tell them to aim their rears at bullseye targets placed in the middle of each seat. Along with an occasional helping hand from the lift operator, the targets position kids closer to the chair seatback. The operator then lowers the restraining bar prior to the chair leaving the ramp.

Guests are instructed to sit with their backs and bottoms firmly on the chair, and to hold onto the armrest, seatback, or safety bar if they can maintain the proper seating position.

As riders progress up the lift line, they are greeted by prominent signage on towers that urges, “Keep the bar down.” Approaching the unloading zone, the tower sports a large green arrow and the message, “Raise the bar now.”

“We want people to raise the bar right at the terminal,” says Dallas.

Aside from placing targets on the seats, the resort has also added drop-posts to the restraining bars on three of its lifts. The posts touch the seats between riders’ legs, greatly increasing their effectiveness for children. (These also provide an additional measure of safety for adults with medical issues.) Dallas says the resort is considering adding drop-posts to restraining bars on other lifts, but each lift has to be evaluated for type, usage, and manufacturer.

Instruction. Young snowsports-school guests and ski team members receive training on chairlift loading as part of their programs. A KOL safety talk is included at the start of all age-appropriate Sugar Bowl Ski School lessons, and U-55 students wear yellow vests to help alert lift operators. Similarly, U-55s on the Sugar Bowl Ski Team have stickers on their helmets. For team members, lift training is conducted monthly. Protocols for ski team members are specific to ages 4 through 6 and to ages 7 and 8.

The resort also encourages parents to talk safety with their children, and provides a series of talking points. These emphasize the value of sitting back in the chair, holding onto the safety bar, sitting quietly, and keeping the bar down until arrival at the unloading platform.

Employee Training. The Kids on Lifts program is reinforced on the front end with a “very rigorous staff training program,” says Dallas, and on the back end with cameras aimed at lift loading areas. Lift operators receive monthly training on chairlift safety and periodic feedback on their individual safety practices.

Camera footage is monitored in real time at resort dispatch and available for later review and training.

“Our team conducts regular audits of the entire program to make sure we’re doing everything right,” says Dallas. This includes monthly audits that both Dallas and the Hendersons are involved with.

There’s been a learning curve for Dallas and others while developing elements of the program. “At Mammoth, we tried to make kids always sit on the outside of the chair next to the arm rests,” he says. “But that created problems with families and others. At Sugar Bowl, we try to move kids to the outside positions, but it’s not necessary in all circumstances.”

Ski California (aka The California Ski Industry Association) has also been deeply involved in creating kids’ lift safety programs throughout the state. “Chairlift safety in general is a huge priority for us,” says Michael Reitzell, Ski California president. “We are making a large effort on it with our industry this year.” The organization has created a nearly-three-minute video on chairlift safety, and is currently editing several shorter videos for use on social media and elsewhere. Reitzell says they’ve made sure to match the messaging in their videos to the national message.

Other Ski California resorts that have added child safety signage to lift towers and/or loading zones include Squaw Valley Alpine Meadows, Tahoe Donner, and Big Bear Mountain Resort. On Ski California Safety Day, Kirkwood Mountain offered a “Bars for Bar” program, where skiers and riders who arrive at a chairlift unloading zone with the safety bar down are rewarded with a sweet prize—free candy bars. Mammoth Mountain has an 11-point Kids on Lifts program. The NSAA tackles the issue with a 6-point Kids on Lifts program.

“We continually work with the state of California to improve chairlift safety,” says Reitzell. “The efforts we’ve made so far as an industry have started to change the culture here, helping to increase the use of restraining bars on chairlifts.”

Suppliers are getting into the act, too. On the state-of-the-art Doppelmayr-built Ramcharger 8 detachable at Big Sky, Mont., the restraining bar remains locked down automatically until riders’ skis and board are almost touching down on the unload ramp. That technology is not feasible for all lifts, of course, but it demonstrates the type of advances being made in the name of safety.

Ski California also continues to work with the Henderson family. The parents served as keynote speakers at the organization’s Lift Maintenance and Operations Education Conference last June, and at the RMLA seminar in Colorado last May.

The Hendersons’ response to their family’s loss, the collaboration they’ve inspired, and their connection to Sugar Bowl ski resort are all wonderful examples of how love of the sport and an impulse to help others can help overcome even the greatest tragedy. Kids on Lifts and similar programs also embody the ski industry’s ability to listen, learn, and respond, increasing safety and enjoyment for all its guests.