Despite the coronavirus, resorts launched major and minor projects this summer.

The Blake Residences, a new luxury condo complex, is set to be completed in November 2020. The project started in spring of 2019 and is part of a $300 million master plan that began 10 years ago as a public-private partnership between the Village of Taos Ski Valley and resort owner Louis Bacon.

The residential building fronts an 11,000-sf pedestrian plaza, which abuts a 5,800-sf ice rink/performing arts lawn. The plaza’s geothermal heating system was installed in late July; next up is installation of the bridge that will connect the extended plaza to the Village’s existing plaza.

In keeping with Taos’ B-Corp status, the building has a panelized wood frame construction system. This allowed the team to minimize exposure to the elements and expand the use of wood products in the build. Bradbury Stamm, a female-owned construction company from Albuquerque, N.M., is overseeing construction. The building and site are LEED compliant and follow the same protocols exercised on The Blake hotel build, which has Silver LEED status. Issued by the U.S. Green Building Council, LEED certifications award points for green building strategies.

Los Griegos Studio, a female-owned firm in Santa Fe, N.M., designed the interiors. The look is influenced by Native American, Hispanic, and European cultures and traditions. Finishes will be a mixture of rustic and modern, with antique flourishes.

Aspen Skiing Company is installing a $10.8 million, high-speed six-passenger chairlift from Leitner-Poma to replace the 1987 Big Burn high-speed quad at Snowmass. The quad was among the first-generation of high-speed lifts and had reached its “operational lifetime,” according to SkiCo. The project began in the spring and is scheduled to be complete before the winter season begins.

The 7,639-foot span will climb 1,982 vertical feet in seven minutes, following the same alignment as the previous lift. However, the bottom terminal was moved uphill roughly 250 feet, so it’s closer to the Ullrhof restaurant. The new location will also make loading easier. As of early August, foundations were poured and construction was beginning on the terminals.

The new lift will be powered by a Leitner-Poma Direct Drive, which SkiCo says requires less maintenance, is more reliable, and is more energy efficient than traditional motors. With 89 carriers, the new Big Burn will have fewer chairs, but the same initial capacity as the old lift of 2,200 pph. The lift has the potential to increase capacity to 2,800 pph, and was designed and constructed to accommodate bubble chairs in the future.

As is increasingly the custom with decommissioned lifts, Aspen Snowmass sold the old Big Burn chairs last spring, raising $20,000. All proceeds went to the Aspen Snowmass Caring for Community Fund, which is run and funded by Aspen Snowmass employees. The funds were distributed among local non-profits.

Mission Ridge is replacing its old Chair 2 quad with a 1988 Doppelmayr detachable quad. The lift climbs 1,563 feet of vertical, providing access to the vast majority of the resort’s in-bounds and sidecountry terrain.

At 6,272 feet long, it is 100 feet shorter than the old lift but will have the same alignment, with new tower locations and a lower profile at the top to minimize wind effects. All 117 carriers are outfitted with retractable bubbles. The new-to-Mission-Ridge lift will have all new wiring, lighting, and electrical systems, as well as a new top-drive motor and controls.

Carriers will be housed at night in a new storage facility adjacent to the bottom terminal, which will reduce de-icing time after weather events. The 3,200-sf structure will also serve as a new lift maintenance facility, replacing the old 640-sf Sheave Shop. The new three-story building will have heated floors, a snowcat bay, truck and snowmobile bay, and wash facilities, as well as storage room for the carriers.

Demolition of the old Sheave Shop was conducted by the local county fire department, which used it as a live fire-training venue. This sped removal and allowed excavation and utility work to begin earlier.

Construction of the new facility and lift is being done in-house, with consulting support from Alpine Cable and Construction Inc., local engineering firm SCJ, and Skytrac. The resort tripled its usual summer payroll, with existing employees across several departments—from F&B to marketing—taking part in the build. Mission Ridge is also using local suppliers wherever possible.

Work on the project started after the shutdown in mid-March, with crews clearing the summer access road to begin moving machinery. The installation is set to be completed Nov. 1. 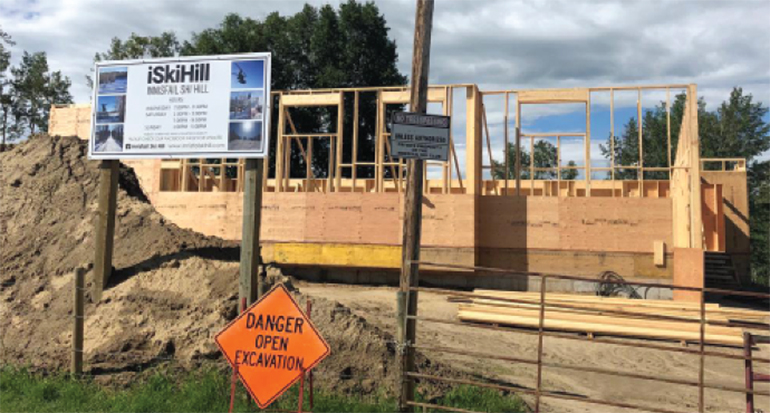 Innisfail, a non-profit, volunteer-run ski hill, is replacing its 57-year-old hilltop lodge with a new, CAN$375,000 chalet. Demolition of the old structure started in June, and the new building is set for completion by Nov. 15 despite late snowfall, permitting delays, and COVID-19 complications.

The two-level, 2,300-sf structure was designed by local architect Cailyn Jackson. The main floor includes a rental operation, small commercial kitchen and concession stand, two universal wheelchair-accessible bathrooms, and a seating area with a gas fireplace. A large deck will face the ski hill. The basement houses a mechanical room and a roughed-in meeting room.

The new chalet embodies efficiency. It utilizes long-lasting, easy-to-repair materials like metal cladding and cement fiber board. It has a concrete basement, a metal roof, R60 insulation in the attic, R20 insulation in the walls, and 24-inch stud spacing to minimize the transfer of heat and cold. It has an HE forced-air furnace and LED lighting. South-facing windows and metal shutter coverings improve heat retention.

To keep costs low, volunteers and local contractors enthusiastically provided their services. Vendors offered in-kind donations and price breaks on services and materials. One group of young volunteers was in early, laying plastic and rebar before the foundation was poured. The combined generosity may keep the final cost below the original estimate.

“We are very community invested,” says Angela Spiller, the building committee’s volunteer coordinator. To that end, the building may eventually evolve into a year-round community space. 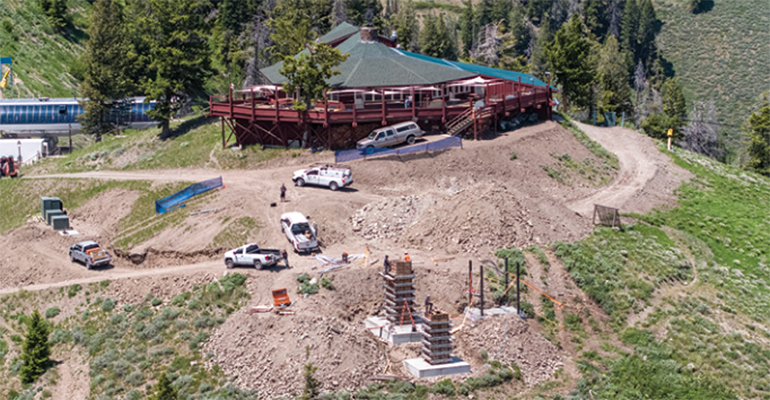 A key component of the project is taking place this summer: replacing the Cold Springs double—one of the oldest chairs on the mountain—with a new Doppelmayr high-speed detachable quad. The new lift is 5,535 feet long and rises 1,582 vertical feet along an entirely new lift line, carrying riders from the bottom of the expanded terrain, previously unserved by a lift, back to the top of the Roundhouse Gondola and the base of the upper mountain Christmas Quad. Much of the new acreage will be expert chutes, bowls, and glades.

In advance of the lift installation, trees were removed from 23 gladed acres and 12 new acres of Lower Broadway, a beginner trail that has been extended to the base of the new quad. To prepare the lower-terminal site, the resort relocated substantial utility infrastructure—transformers, switches and power lines, and network and communication cables.

The resort worked with the Forest Service and BLM to minimize environmental disruptions. Existing service roads provided access to the lower and upper terminals. A spider excavator dug the footings for the new towers. A helicopter flew out the old towers and flew in the rebar cages for the concrete footings of the 21 new towers.

Twenty-five new TechnoAlpin Rubis SR10s have been installed on the Lower Broadway extension. Crews buried about 4,200 feet of new pipe for the expansion and tied it into the existing snowmaking line. The trail will be nearly three miles long when complete. 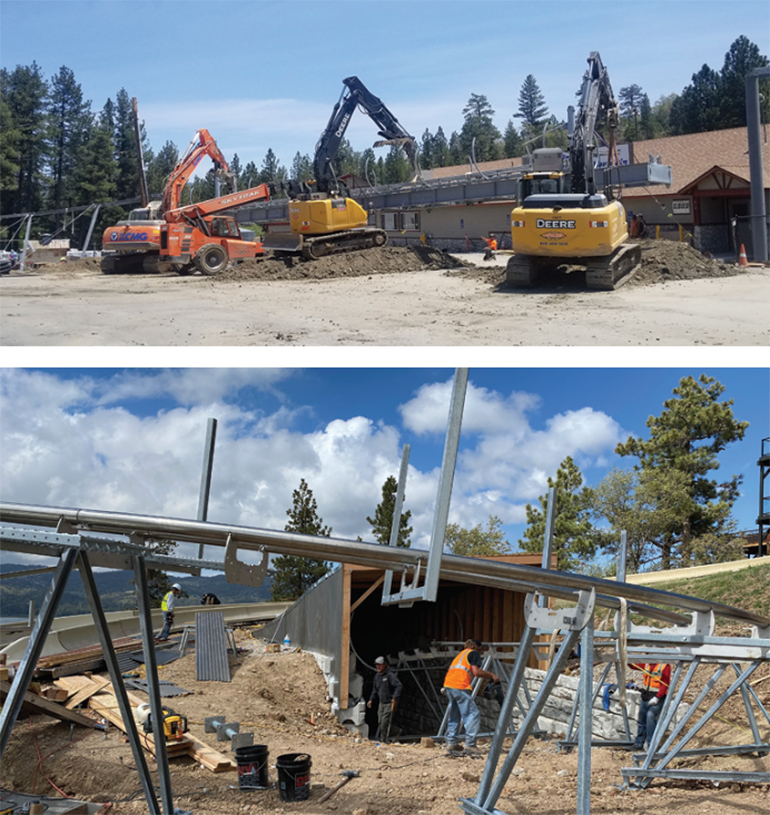 This spring, Big Bear installed the Mineshaft mountain coaster from Wiegand Sports USA. The $2.5-million coaster, the first multi-track alpine coaster on the West Coast, has five bridges—three of which are 200 feet long—three 360-degree corkscrew loops, and two tunnels over its nearly 5,000-foot length. It travels 140 vertical feet twice. The entire ride is about six minutes, depending on the driver, and carts can reach up to 27 mph.

The coaster was designed around the existing adventure park, allowing for less tree clearing and site work. It crisscrosses or runs parallel to the water slide, alpine slide, mini-golf, and go-carts.

Construction began in January. Towsley Construction did the earth work, including the load and unload stations and the tunnels, and poured more than 80 foundations. Wiegand installed the track and electrical. The entire build took 210 days over seven months.

The coronavirus outbreak complicated the build. Wiegand began installation March 3, then quarantined its on-site supervisors in Montana March 20 to April 22 while Towsley continued with dirt work and foundations.

To open on time in July, the Wiegand crew completed its planned 120-day install in just 92 days. That required a series of COVID adaptations, Wiegand sales and project manager Jessica Wedel said: use of local rather than European TUV inspectors, and meetings and site visits conducted over Zoom or via phone calls. The crew also employed a variety of PPE and sanitization products. Despite some snags, the coaster was completed for a July 17 public opening. “We are very proud of our crew,” said Wedel.