Exploring the current marketplace of this all-important part of snowmaking infrastructure. 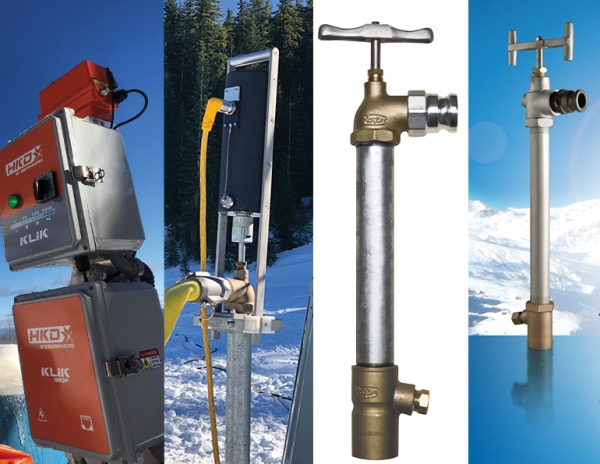 In their earliest incarnations back in the 1960s, hydrants used for snowmaking were originally designed for agricultural use. However, these hydrants weren’t equipped to handle the higher pressures required as water had to be pumped up a slope, and they were susceptible to freezing.

Fast forward to now, and snowmaking hydrants are remarkably sophisticated, able to handle high pressures, super cold temps, and some can even turn themselves on and off.

Here, we’ll explore some of the basic facts about current snowmaking hydrants, as well as some of the products themselves.

The direct descendants of the 1960s make-shift valves, manual hydrants still make up the vast majority of the North American installed base.

Water hydrants are generally available in 1.5” and 2” diameter sizes. This is reflective of the riser pipe size of the hydrant. However, this does not necessarily translate to actual capacity in terms of water flow. The internal configuration of the hydrant, notably the plug and seat design, will relate to the internal flow restriction and thus the water flow capacity. Within the same brand, a 2” diameter is obviously larger in capacity than a 1.5” hydrant, but this does not mean the flow capacity is the same relationship across different brands.

Flow capacity is dependent on the available pressure at the hydrant and the minimum downstream pressure the gun connected to it can tolerate. This difference in pressure is called the pressure drop.

For a particular flow, the hydrant will have a certain pressure drop. If the flow is high enough, the pressure drop reaches a point that will starve the gun of required water pressure and affect its performance. This is of particular concern with newer low-energy tower guns and large-nozzle fan guns, where minimum required pressures are usually in the 300 PSI range. Keep in mind that doubling the flow can increase the pressure drop by approximately a factor of four, so pressure drops can significantly increase as these multi-step guns are incremented upwards.

Generally speaking, applications involving low-energy tower guns can use 1.5” hydrants since their flow capacities are usually 60 GPM or lower. However, mid- to large-size fan guns can have capacities of 100-150 GPM, so 2” diameter hydrants fit the application better. Flow characteristics can vary widely between models and manufacturers, so it is worth checking with your supplier.

A general trend in the industry is the increasing of water pressures to allow for low-energy gun usage. Pressures of 1,000 PSI and greater are becoming more common across the industry. As this trend continues, resorts need to ensure the hydrants they have—and ones they plan to install—have high enough allowable pressure ratings to handle current and future needs.

Consider replacing old hydrants that are in high-pressure zones to minimize the risk of failure, and to provide greater operator safety.

Speaking of safety, if a hydrant is installed to the pipeline with a pipe nipple, make sure the pipe nipples are Schedule 80 to provide greater strength and longevity.

The primary manual hydrants currently available in the North American market are manufactured by Roger’s, HTM, and Ratnik.

All three manufacturers offer various hydrant lengths to meet customer requirements, from 6 inches up to 13 feet long, and service pressures up to 1,200 PSI. Hydrants are manufactured in North American factories and have been well established in the snowmaking industry.

Roger’s
Roger’s has been manufacturing hydrants since 1981. In 2009, Roger’s was acquired by WCM Industries and has moved manufacturing from its original plant in Dorset, Vt., to Colorado Springs, Colo.

Roger’s hydrants feature a “Flow Controller,” a serrated polymer valve plug that provides better throttling capability. The Flow Controller plug mates with a bronze seat on low-pressure versions and a stainless-steel seat on high-pressure versions. Hydrants are equipped with an automatic drain valve to evacuate water out of the hydrant when the plug is closed. 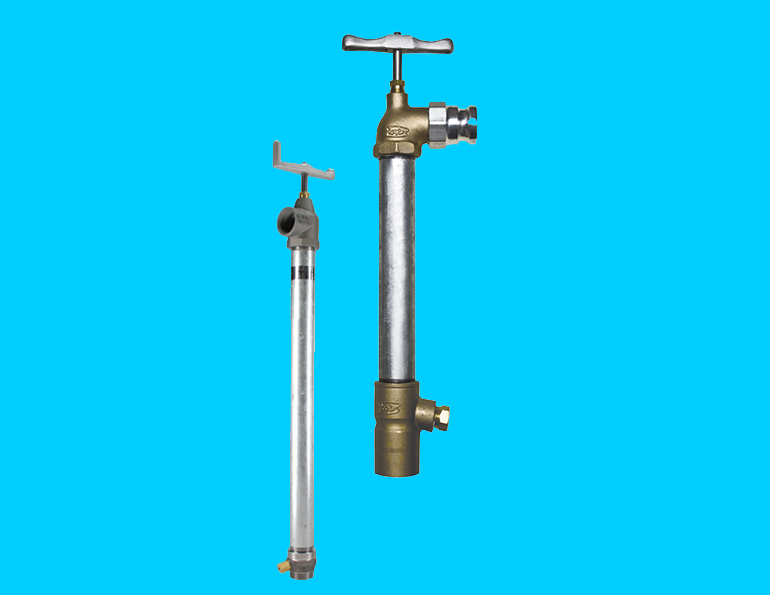 HTM
HTM was founded in 1990. Its manufacturing facility is located in Kelowna, British Columbia. U.S. distribution is handled by its facility in Gig Harbor, Wash.

The distinct feature of the HTM hydrant is that the internal plug and seat can be removed using a special tool from above the ground level without digging out the hydrant. The H-Series has the added feature of the drain valve being serviceable from above ground, while the E-Series hydrants have a more traditional drain valve that is not accessible from above ground. HTM also has an angled outlet available, which is intended for manhole installations.

Ratnik
Ratnik Industries was founded in 1965 and currently manufactures both 1.5” and 2” diameter hydrants, Models 150C and 200C, respectively, at its facility in Victor, N.Y. 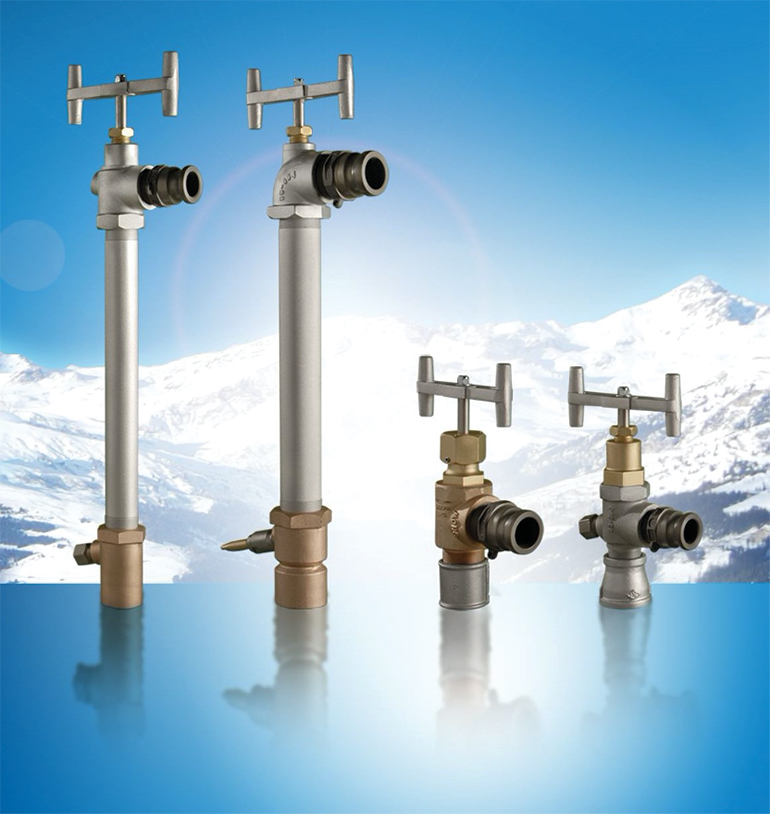 Like many other suppliers, parts are machined on automated CNC machines for precision and consistency.

For above-ground pipe installations where a riser pipe extension is not necessary, a surface hydrant may be a good option.

Ratnik manufactures its 150 and 200 Series Angle Valve, offered with optional drains, which is beneficial on tower gun installations.

Since there is an extensive installed base of existing manual hydrants, snow gun manufacturers of automated equipment offer methods to automate manual hydrant positions. These are primarily offered by fan-gun manufacturers since the automated control and power are generated by the gun itself and do not necessarily require in-ground automation wiring.

SMI Snow Makers of Midland, Mich., offers an actuator solution, which clamps onto existing manual hydrants. A mounting kit is available for virtually all snowmaking hydrant brands and sizes. 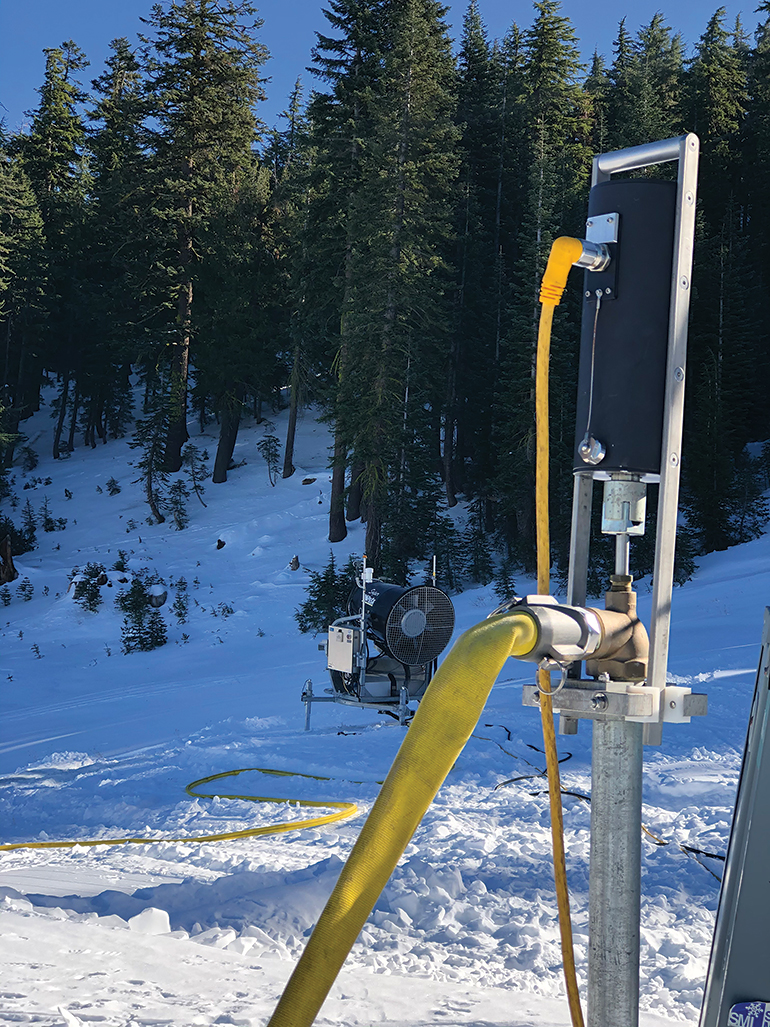 A key feature is the motor and control system can be programmed for the torque and flow characteristics of a particular hydrant. The actuator not only opens and closes the hydrant, but also adjusts pressure to the gun to maintain optimum performance using the controller integral to each snow gun.

SMI president Joe VanderKelen says the hydrant actuator has 20 years of development under its belt, and smoothly integrates with the company’s SmartSnow automation software.

Manufacturers of automated low-air tower equipment have developed specialized hydrants designed specifically for their snow guns. These hydrants are designed to operate their multi-stage snow guns and will increment additional stages based on temperature changes.

HKD Snowmakers of Natick, Mass., has developed the KLIK hydrant, which is designed specifically for its line of multi-step guns. Available in both manual and automatic versions, the KLIK hydrant speeds up the process of starting and stopping a gun, since the hoses are always connected. KLIK hydrants can be installed on surface mounted pipe above ground or in an underground vault for buried versions. Customers can phase in the investment by upgrading manual hydrants to automatic motorized versions in the future. 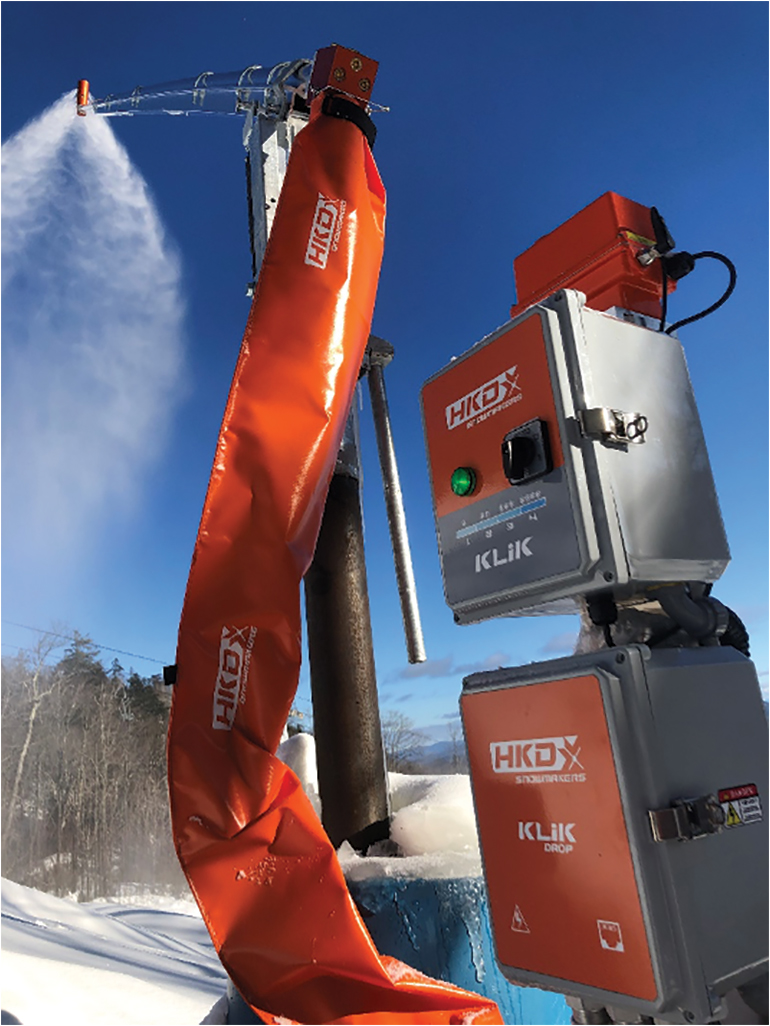 HKD vice president Ian Jarrett says the KLIK hydrant has been available in the market for the last 10 years, and an important benefit is it provides for operational safety and productivity since personnel do not have to connect or disconnect hoses to the gun.

Manual hydrants are a mature market and are still likely to remain the most prevalent choice for the foreseeable future. We are likely to see more automated options and upgrades, both conversions or proprietary hydrants.

The limiting factor in the North American market of automated hydrants is the cost. However, acceptance is growing due to benefits in efficiency, labor, and safety. Manufacturers should take up the challenge to develop products that can bridge the gap between the manual and current automated offerings, which will be attractive to a broader base of ski area operators.

We have come a long way over the years. One thing is certain: the innovation in the marketplace will continue to advance and provide benefits to ski area operators.