Wildfire was just one of the challenges China Peak overcame in expanding its snowmaking system. 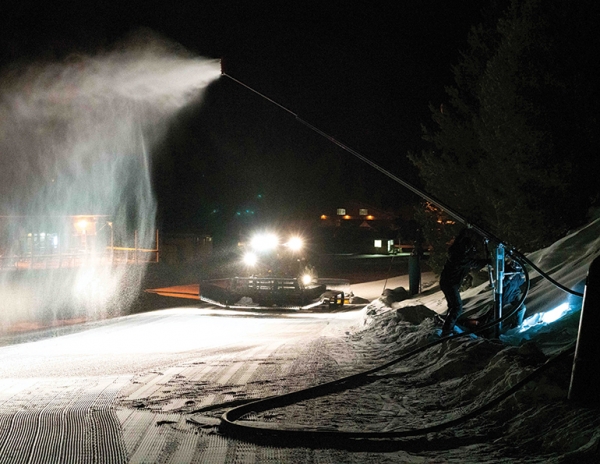 China Peak has more than tripled its snowmaking capacity over the last two years.

Drought, forest fire, pestilence (Covid), and explosions. China Peak Mountain Resort experienced a mini- apocalypse in 2020. But this Central California ski area is back stronger than ever, thanks to skillful firefighters and the big bet the resort made on snowmaking.

In summer 2019, CEO Tim Cohee and company committed to a major snowmaking upgrade. The new system would more than triple the water volume of the old, to 4,000 gpm. The resort’s initial commitment to the three-year upgrade was $3.5 million, but Cohee predicts it will be close to $4 million by next fall.

The area had not invested heavily on snowmaking in the past. For much of its 62-year history, too much natural snow was the problem, not too little. A huge winter in the early 1960s closed the road to the mountain for almost the entire season, collapsing a new dormitory, and bankrupting the ski area.

Snow Summit eventually purchased the resort in the 1980s and installed the first snowmaking system. This was basically a “patch and fill” snowmaking system, with a total capacity of 1,200 gpm. Still, it was considered more than adequate at the time.

Since 2010, though, the year Cohee and partners bought China Peak, California has gone through six years of drought. Natural snow became less reliable.

“We were the NFL team that was going 4-12,” says Cohee, who is fond of football metaphors. “Without natural snow at Christmas, we could never be a playoff team. But with snowmaking, we believe we’d go 15-1.”

The old-boy network. Cohee has been around snowmaking throughout his career, including stints in senior management at Snow Summit, Sunday River, and Heavenly. For the China Peak snowmaking project, he turned to one of his former bosses, Bill Killebrew, former owner of Heavenly, for advice. Consultant Jay Collins also advised on the system’s design and helped with installation.

“Bill is one of the smartest snowmaking system designers in the world,” Cohee says. “He told me it would take at least three years to get our system in place and for us to learn how to run it. The first year [2019-20] was a disaster. But now in year two, we would be closed without the new system.”

Smoke from nearby forest fires looms over the pipe installation project last summer.

Putting It All Together

China Peak’s original snowmaking system relied on water from a mid-mountain pond and nearby pumphouse, and from Big Creek, a tributary that flows around the base area, where a second pumphouse was located.

Initial work in 2019 focused on tapping nearby Huntington Lake reservoir. The area ran 6,000 feet of 11-inch aluminum pipe up the 200 vertical feet to the base area, built a third pumphouse, and added pumps.

In the new 1,000 sf pumphouse are three 400 hp, 750 gpm pumps. Ratnik supplied the pumps and controls. The three pumps can pull 2,250 gpm from the lake. The Big Creek pumphouse can now pull 1,000 gpm, and the mid-mountain pumphouse another 1,000 gpm, pulled from the 5-million-gallon pond there.

Second-year work included replacement of existing water lines on the mountain with new, large pipe. From the base area, a mile of 12-inch pipe delivers a “massive amount of water” to the upper mountain, says Cohee, roughly following Academy, the area’s main trail. Extending off this main line are 15,000 feet of new 6-inch pipe, replacing older 4-inch pipe, and reaching the resort’s five main lifts and beginner area. Isolation valves at five critical junctions along the main line control water flow, uphill or downhill, and from the resort’s three pumphouses.

At the business end of China Peak’s new pipes are two types of snow guns, also installed this past summer and fall. Thirty Ratnik mid-energy Snow Giant X-2 ground-based guns are used primarily on the resort’s steeper, upper runs. Cohee says these new models use much less air than older Ratniks. Low-pressure HKD Impulse R5 guns, mounted on 30-foot towers, are the workhorses of the lower slopes. The resort has 100 in place this season. 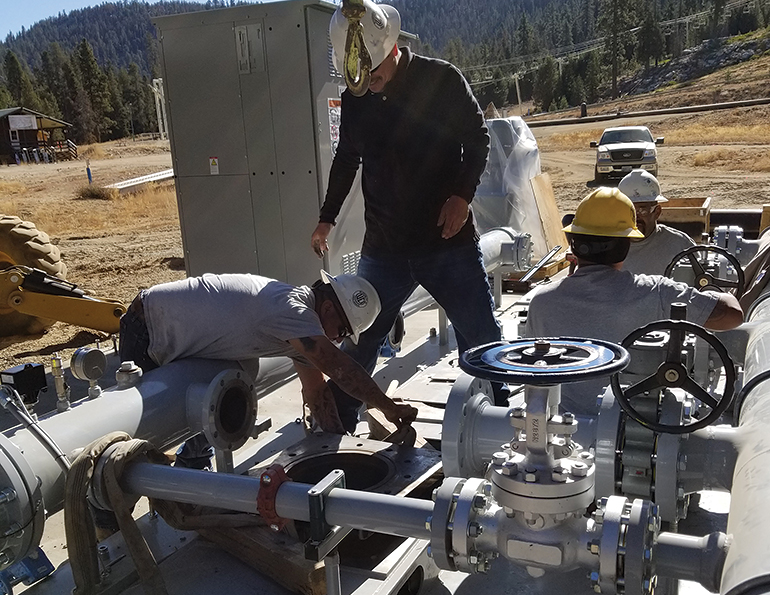 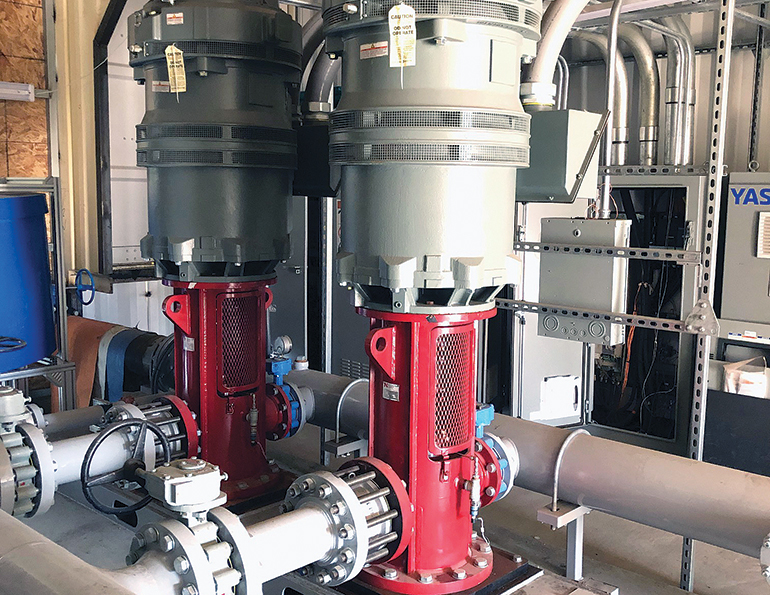 One disaster after another. As Killebrew predicted, it has taken awhile to work out the bugs in the system. The biggest issue in year one stemmed from the water level in Huntington Lake. The power company, Southern California Edison (SCE), had been holding back water upstream as it was finishing up some dam repairs. China Peak had set its lake pump in place based on the lake level at the time, which usually recedes from that point through the winter.

Instead, SCE released water it had been holding back, and that brought the lake level up, threatening to submerge the lake pump. The resort moved the pump out of harm’s way, and never reset it—rendering the new pumphouse at the base useless. Thanks to ample natural snow, though, the area was able to rely on the two older pumphouses all winter.

For the second year, the lake level returned to its usual pattern. But then, 2020.

Wildfire! As work was progressing last summer, a wildfire started a few miles west of the resort on Sept. 5. The next day, all resort personal were evacuated, with no one allowed back in for 30 days.

“The firefighters put in a huge effort to save China Peak and Shaver Lake businesses,” says Cohee. “We lost five employee housing buildings, utility assets, and the avalanche arsenal, which exploded. Somehow, they saved most of the ski resort.” Damage to the resort facilities topped $1 million, and crews lost a crucial two months of work on the new system. Aside from one of the HKD guns, though, the snowmaking system escaped untouched.

Once back on site, Scott Towsley and his crew of pipe installers completed all remaining 6-inch pipe welding and zap-locking. Tim’s son, Troy Cohee, director of snow surfaces, along with mountain ops director Jennifer Brown, coordinated all the in-house excavation required for the upgrades. 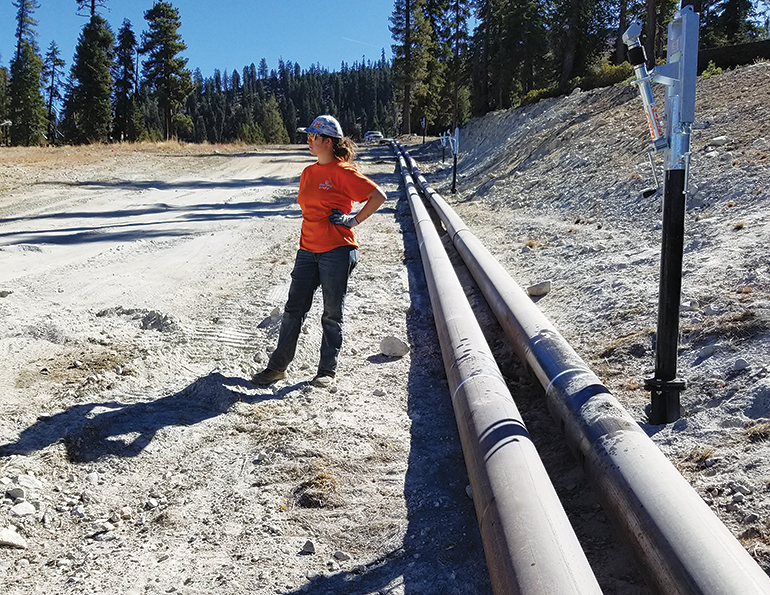 Success at last. Twelve weeks after narrowly avoiding being burned to the ground, China Peak opened Nov. 29 with five lifts and beginner area. Facing Covid, the loss of half its employee housing, a slow start to winter snowfall, and the delayed start for snowmaking, the resort still managed to open at least one run off every lift before Christmas, skiing on 50 of the 160 acres covered by snowmaking.

And that’s about the worst-case scenario for the new system. In a more normal season, the resort will be able to open sooner. “Because of the fire delay, we missed the perfect temperature window for snowmaking in early November,” Cohee says. Some Southern California areas survived the month primarily on snow made during that four-day window, he adds.

Based on this year’s experience, China Peak will relocate some guns from its main trail. “We have too many guns on the main run that gets us open,” says Cohee. “We’ll move 20 to 30 of the HKDs to other important runs off three additional lifts. If necessary we’ll supplement the HKDs on the main route with Ratnik ground guns.”

Barging ahead. Upgrades for the 2021-22 season could include moving the pump at Huntington Lake onto a barge, to eliminate the need to relocate it several times as the lake level drops. SCE is installing 480 kV power to that pump, and China Peak will convert it from diesel to electric.

Additional off-season efforts will center on summer slope grooming, which Cohee says the resort has done “a crummy job of” in the past. “Our goal is to be able to open our major runs with a foot of snow,” he says.

Replacing the resort’s employee housing is also high on the list, to aid in expanding the snowmaking staff—which was stretched thin this winter. 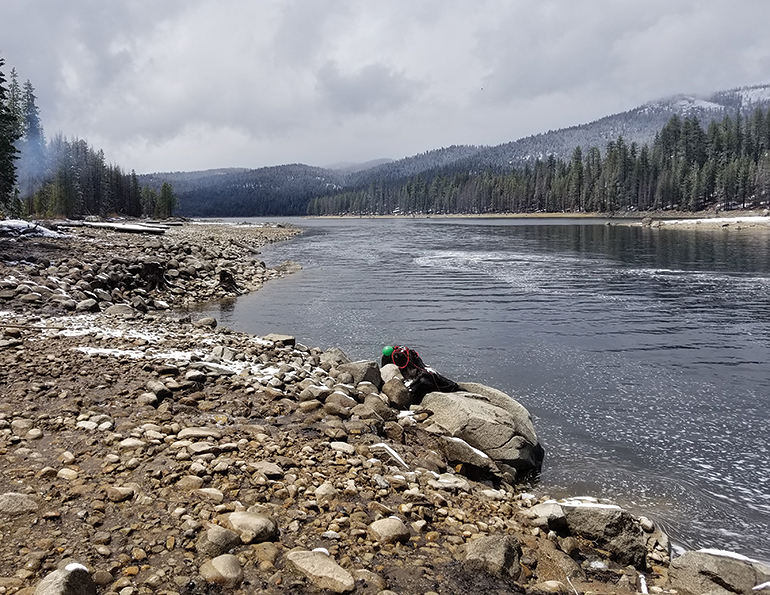 Get creative with financing. A major snowmaking expansion can be a heavy lift for an independent resort, so China Peak sought a range of funding sources. It won a NSAA HKD snowmaking grant of $20,000, which paid for five guns, plus a $50,000 rebate on the installation. Cohee is currently seeking a USDA grant, which would provide up to $250,000 for compressed air efficiency.

Quality counts. “Killebrew always preaches, ‘Make good snow from day one,’” says Cohee. And he agrees: “Base building is total B.S. If you make crappy snow, you are going to have crappy skiing. If you try to move it with snowcats, you can end up with giant, frozen snow cones. You make the same snow on day one as on day 50.”

Quantity matters, too. Cohee predicts that resorts in California with access to water will be investing heavily, and soon. “It takes a minimum of a 3,000 gpm snowmaking system for a resort to be in the game,” he says.

Timing is everything. “California snowmaking is different than in some other parts of the country,” Cohee adds. “We have very narrow weather windows to make snow. We have to build these massive systems so when the window opens, we’re ready. Even with a huge system, if you don’t get natural snow, you’re going to need 200 hours of snowmaking before December 26.”

That thinking might be more widespread than you imagine, Tim.