Cross-Country on the Rise

There are several indications that long-term growth is on tap for Nordic skiing, and alpine resorts may want to capitalize. 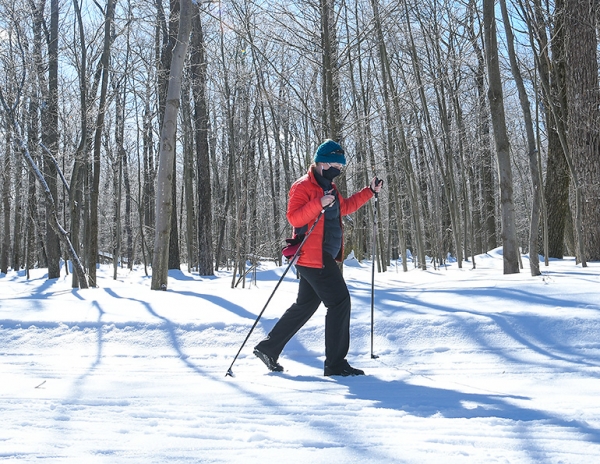 Skiing in North America has long been a house divided. On one side, alpine skiing; on another, Nordic skiing. Different terrain. Different equipment. Different locations. Different skiers with different objectives. And vastly different revenue structures, with a good day at an alpine area producing literally hundreds of times the revenue of a good day at a Nordic area.

That last point might be the main reason why relatively few North American alpine resorts have crossed over to dabble in Nordic. Most resorts seem inclined to abide by a fundamental business principle: invest your money where the money is.

But the strange winter of 2020-21 has busted a bunch of ski-industry shibboleths, with perhaps one being that Nordic is, by and large, a revenue black hole. Not so in 2020-21. Business at Nordic areas—and Nordic ski business in general—was gangbusters. Meanwhile, many alpine areas struggled to claw their way to profitability in 2020-21, as normally rich revenue streams like food and beverage, lessons, and rentals fell under the savage assault of Covid protocols.

The Nordic boomlet wasn’t just about increased revenues, though. Who is participating, how often, and sales of equipment are all metrics that indicate long-term growth potential—and alpine operators may want to get in on the game.

Newcomers, across a broad demographic, not only gave the sport a try but made a commitment to it, as indicated by a resoundingly good season for Nordic hardgoods sales. Yes, it was a good year on a different order of magnitude than a good year for alpine resorts, but growth is growth, and profitability is profitability.

Hence the question: Is it time for more alpine areas to take an ecumenical approach to skiing by expanding to offer Nordic alternatives? Or at least join forces with a local Nordic operator to provide resort guests with a complete range of skiing possibility?

Revenues on the rise. For starters, consider some preliminary 2020-21 numbers from the Cross Country Ski Areas Association (CCSAA). In a February survey, 75 percent of responding areas reported year-over-year increases in season pass sales, with 46 percent reporting increases of more than 20 percent. Revenue expectations were met or exceeded by 78 percent of the responding areas. 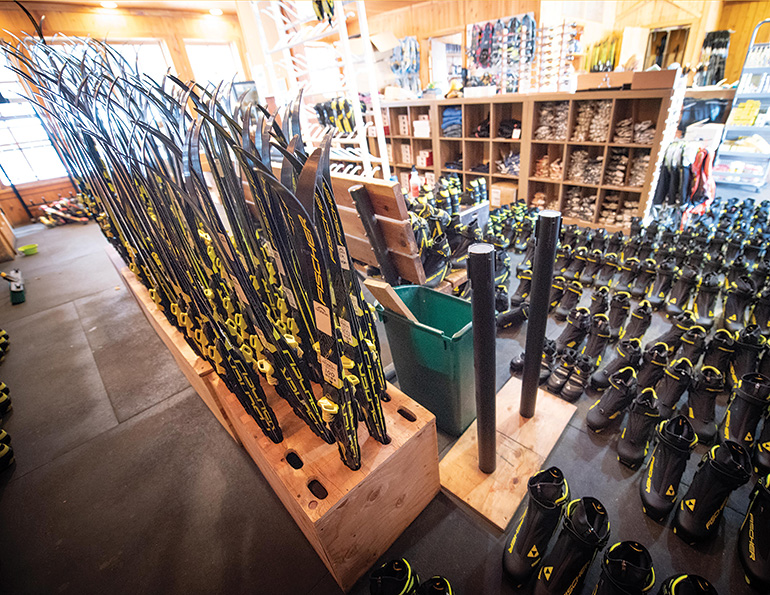 The XC rental business was booming this season at Crested Butte Nordic Center, Colo., and across the U.S. This trend shows great potential for increased revenue opportunities.

While food and beverage revenues were down dramatically—no surprise there—robust upticks in day-ticket sales and rental business, along with increased season pass sales, more than filled the gap. According to the CCSAA survey, 47 percent of skiers rented, showing that “rental has a huge potential for revenue,” says CCSAA executive director Reese Brown.

Flying off the shelves. A similarly rosy picture came from the retail side. According to a February retailer survey by CCSAA, cross-country ski sales were up, year over year, by 96 percent in total dollars. Anecdotally, retailers across the country were reporting complete sell-outs in cross-country gear, with manufacturers largely sold out of any inventory available for mid-season resupplies.

The Covid-driven growth in cross-country was not unexpected. A good natural-snow winter in critical parts of the country (e.g., the Northeast) helped, of course, especially given the absence of snowmaking at most cross-country areas. But after a summer that saw booming sales in cycling and hiking gear and a major increase in golf participation, it was clear to cross-country area operators that people were eager to participate in activities that proffered safety in a time of Covid by naturally encouraging social distancing in the outdoors. Cross-country gear sales were up 200 to 300 percent in August, according to Brown, before a flake of snow had hit the ground.

So, 2020-21 was a good year for cross-country. But was it a one-off in an abnormal year? Or was it part of a trend toward future growth?

“We feel next year is going to be another banner year,” says Brown. He cites several reasons for his optimism: the dramatic increase in retail sales, indicating a commitment to the sport by buyers; the fact that many newcomers skied repeatedly, not just once, a further indication of commitment; and breaking into new demographic segments.

Alongside a surge in sales of Nordic gear last season, cross-country ski areas saw an uptick in visits, lessons, and guided tours. Instructors show and explain proper form at Crested Butte Nordic Center, Colo. (above left), and Rikert Nordic Center, Vt. (above right). Consumer investments in gear and lessons are a hopeful sign, as they show a commitment to continuing with the sport after the pandemic ends.

Broadening demographics. Often regarded as an activity for older folks and young families, “for the first time, cross-country is being considered a real sport, not a fringe sport,” says Brown, meaning that thirtysomething and fortysomething skiers who might previously have shunned cross-country as a sport for wimps are now starting to take it seriously.

Christie Hicks, executive director of Crested Butte Nordic, agrees with Brown’s upbeat assessment. She reports that annual increases of about 10 percent have been the norm in recent years, so that even before the winter of Covid, a growth trend was underway. In 2020-21, growth spiked, with a 50 percent increase in pass sales and rentals and a 100 percent increase in guided tours.

“I don’t know if we’ll see that kind of exponential growth” in years to come, Hicks admits, but she is encouraged by the fact that “younger people—in their 30s and 40s—who see the fitness values of cross-country” showed the biggest increase in participation.

For an activity so dependent on natural snow, of course, any future growth still rides the whims of Mother Nature. “If we don’t have a decent snow year next winter, the bubble’s going to pop,” concedes Mike Hussey, who manages Rikert Nordic Center in Ripton, Vt., as well as neighboring Middlebury College Snow Bowl. That said, Hussey was encouraged that an increase in lessons represented “a commitment of dollars to learn, so they’ll probably stick with it.”

According to Hussey, not only were Rikert’s overall revenues up for 2020-21, revenues per skier were also up (although with no F&B offering, Rikert was unaffected by that potential revenue shortfall).
Business Benefits

The numbers are encouraging for any alpine-area operator contemplating sticking a toe in the cross-country pool. Factors other than growth trends in revenue and participation might also make cross-country an attractive proposition.

Alternative activity. For destination travelers, having an alternative to alpine skiing might be a critical decision maker in vacation planning. Perhaps there is a member (or members) of a family or group not interested in spending all their time alpine skiing. In such a scenario, a family—or perhaps a group busload—will take not only its Nordic dollars but also its alpine dollars only to a destination where a Nordic option is available. Cross-country, as Brown says, offers an alternative to alpine for “those wanting a change of pace or when lifts are on wind hold.” 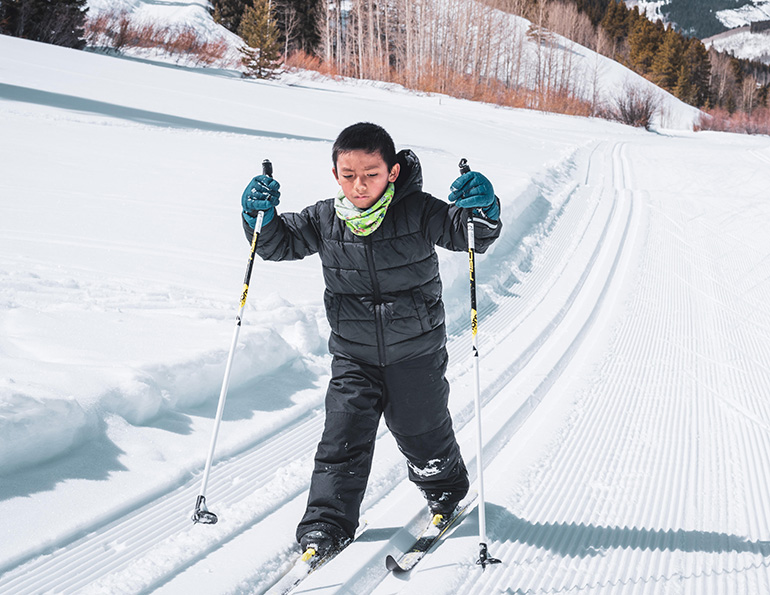 Local support. In addition, cross-country has a solid track record of tapping into local markets and building strong community ties. Local skiers—through clubs, schools, and other community organizations—have not only been a solid revenue source but a foundation for good community relations. A good case study is Bristol Mountain in upstate New York, with a small (3 km) cross-country trail network at the summit of its 1,200-vertical-foot alpine area.

Local business is Bristol’s bread and butter, with the Rochester day market accounting for about 85 percent of the resort’s overall revenues, according to GM Dan Fuller. Bristol has teamed up with local schools to offer, thanks to snowmaking, a reliable place for young Nordic athletes to train and race. That’s a welcome community service, says Fuller—“we’ve had a lot of positive comments”—and it’s also a welcome and reliable source of revenue.

In addition, the alpine-Nordic combo has enabled Bristol to play host to state and sectional competitions. Thanks to pass sales and event-hosting fees, school programs at Bristol are responsible for about 50 percent of the resort’s Nordic revenues.

At Rikert, Hussey also reports that an active Nordic club based at the area has been important in maintaining a strong link with the local community. “A good Nordic club really coalesces local people,” he says—a favorable feeling that spills over to alpine operations at the Snow Bowl. 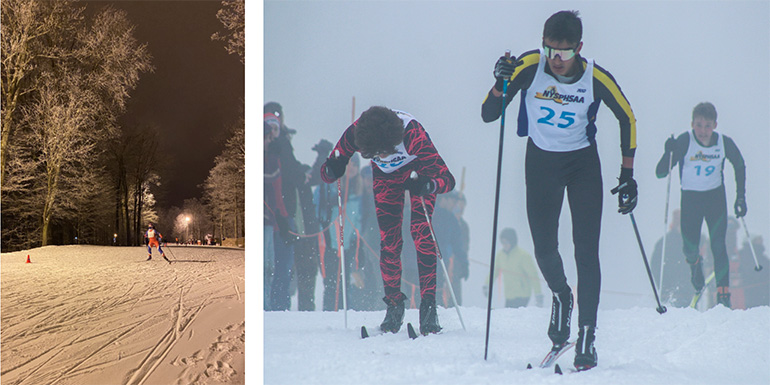 Start putting the pieces together—a growth trend, revenue potential, strengthening community relations—and it might make sense to invest in a Nordic option, even a relatively small one as at Bristol Mountain. By alpine standards, the investment should be modest, especially when potential operational crossovers from the alpine business are factored in.

Ease of entry. Brown suggests that, for an area that might have open land available (e.g., a golf course) where no trail clearing is necessary, an alpine area can get in the Nordic game with the minimal investment of about $30,000: $15,000 for a snowmobile, another $5,000 for a tow-behind grooming implement, and about $10,000 for a rental fleet.

The personnel needs for running a Nordic center are small. Typically, fewer than five people can get the job done. In some cases, it may offer the benefit of retaining valuable summer employees, such as golf-course workers, year-round. Depending on an area’s physical layout and operational structure, some aspects of alpine operations can bleed into Nordic operations, from grooming and snowmaking to ski patrol and instruction. As Brown points out, some expenses, such as insurance, would be negligible because they would already be covered by the alpine umbrella.

The Nordic segment of the ski industry was decidedly a bright spot in the winter of 2020-21. That success was at least partially Covid-driven, of course, but there are strong indications that continued Nordic growth is likely in the foreseeable, post-pandemic future. If so, this might be a sensible time for alpine operators to bring the skiing house together, alpine and Nordic, as one big, happy, revenue-generating family.