A look at the backbone of every snowmaking system's infrastructure. 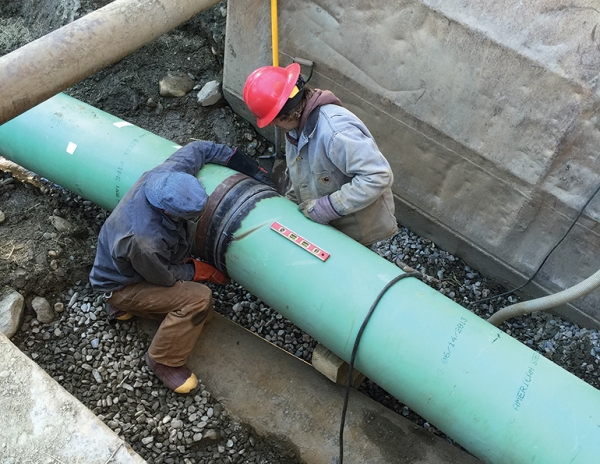 Since the major snowmaking installations of the 1970s and ’80s, snowmaking pipe has undergone a substantial transformation in terms of materials, sizing, and installation techniques. The major types of pipes on the market—steel, ductile iron, and HDPE (a plastic pipe better suited to air transmission than water)—all have their respective merits. For resorts revamping their snowmaking infrastructure, there are a number of factors to consider when it comes to putting the right pipe in the right spot.

ABOVE OR BELOW GROUND?

“I think the first thing a resort needs to identify is whether a pipe is going below ground or above ground,” says Boyne Resorts VP of snow surface management and design, Brendan Ryan.

Corrosion. Deciding whether to bury pipe or install it on the surface will determine how corrosion factors into your pipe choice. “Not all ground is the same,” points out Ryan. When it comes to buried systems, soil composition and other environmental factors have a significant impact on a pipe’s life expectancy. 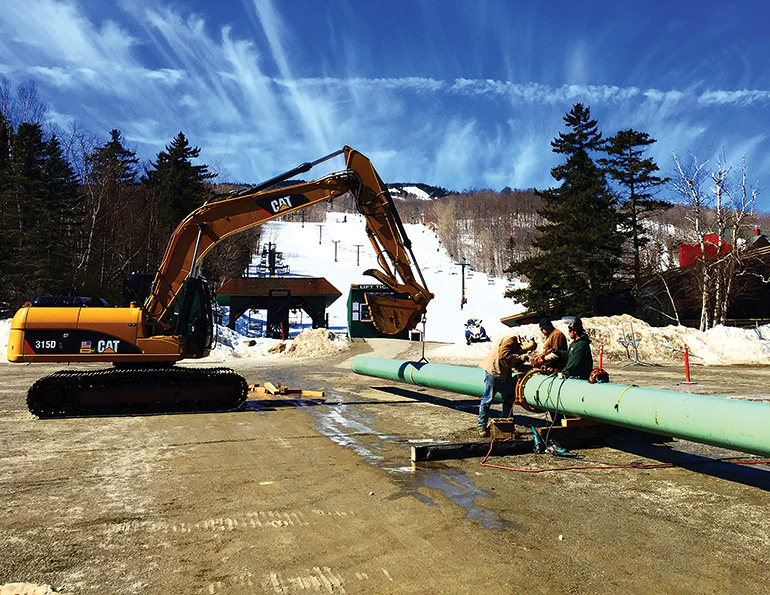 Protection against corrosion. There are ways to protect buried steel pipe, of course. These measures add to the materials bill, but extend a pipe’s lifespan. “Fusion bonded epoxy (FBE) coating has become the standard for steel over the last few years in the industry,” says Ryan. That’s because FBE creates a barrier that mitigates exterior pipe corrosion.

Steel pipe can also be supported by cathodic protection. “We typically put in magnesium anodes for sacrificial corrosion,” says SMI president Joe VanderKelen. Sacrificial anodes are attached to snowmaking pipes and essentially corrode in their stead, extending the pipe’s longevity.

Advantage of ductile iron. Installations that use ductile iron instead of steel don’t need anodes. “Because ductile decays slower, you don’t have to incur that cost,” says Ryan, noting that Boyne Resorts uses both steel and ductile iron in its various pipe networks.

Ductile iron, manufactured primarily in Europe, is said to have a lifespan of three to four times that of bare steel. PNP Supply, the North American distributor of TRM Austria’s ductile iron pipe and fittings, calculates ductile iron’s life expectancy at 120 years to steel’s 35 years, with ductile corroding at a fraction of the rate of steel (0.8 mil/year to steel’s 3.0 mil/year, in one study).

“If you lose a lot of pressure through friction loss, you won’t have enough pressure at the top of the line,” says Ryan. That saps the system’s capacity.

Interior erosion can also cause loose scale to slough off inside a pipe, potentially impacting water quality and/or clogging small orifices, like the nozzles on the increasingly ubiquitous high-efficiency snowmaking guns.

Air transport. Of course, some snowmaking pipes carry air, which comes with its own considerations. “Water pipe has to be replaced more frequently; your air pipes don’t corrode on the inside in the same way,” notes Sandy McPherson of PFM Snowmaking. 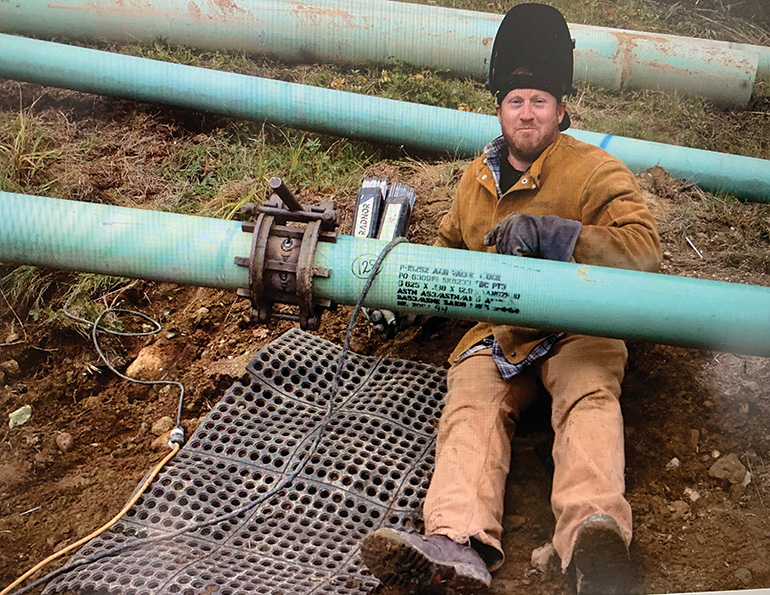 While some types of pipe and larger runs can be joined mechanically (and economically), welding the pipe connections still has its advantages.

“The challenge with it,” says McPherson, “is that, for air, the connection points can get compromised because of the heat. Air is incredibly expensive to make, so losing it through small leaks is costly.”

Pipe size 180. Air used to be the primary element in snowmaking, but advances in technology have resulted in a 180-degree change in the air/water mix. “It used to be that your air pipe was larger and your water pipe was smaller,” says McPherson. Now, as resorts switch to low-e guns, resorts need to move less air and more water through their snowmaking networks.

Bigger water pipes mean heavier price tags. “Price per foot skyrockets as your pipe gets bigger,” says McPherson. “If you are trying to bring in large ductile from Europe, your shipping costs also increase.”

Size it right. Sizing your pipe correctly is key not just to economizing the upfront materials costs; it’s also vital to ensuring your system will run at peak efficiency. “You have to be able to utilize the guns you install,” says Ryan. “You need to understand at full flow what you can run in different spots. If you can’t deliver water at the right pressure, your guns freeze and your system becomes ineffective.

“You really start losing pressure and wasting energy when you are trying to jam too much water through too small a pipe,” adds Ryan. “High velocity can also actually cause pipe erosion from the inside.”

Big-picture planning. Jay Rydd, a former snowmaking installation project manager and now the mountain operations manager at Diamond Peak, Calif., reminds operators that it’s important to consider the end goal when sizing pipe, especially in phased projects. “When you are building the bottom of your system, you don’t want to under-size your pipe. You’ll only have to replace it because it can’t handle the volume as your system expands.”

“I’ve also seen people way oversize [pipe],” says Rydd. “Having a 12-inch pipe where you only need a six-inch does you no good; it doesn’t add value for you in any way.”

“New pipe is a whole lot of money. It’s a big commitment,” says Rydd. When it comes to calculating ROI, PNP managing partner Peter Alford says, “look beyond the material cost. It’s only one component. Material cost for ductile may be 30 to 40 percent higher, but installation costs can be up to 50 to 60 percent lower.”

“Ductile’s coupled joint can be easier if you are doing an in-house install and you don’t have an efficient welder on staff,” adds VanderKelen. 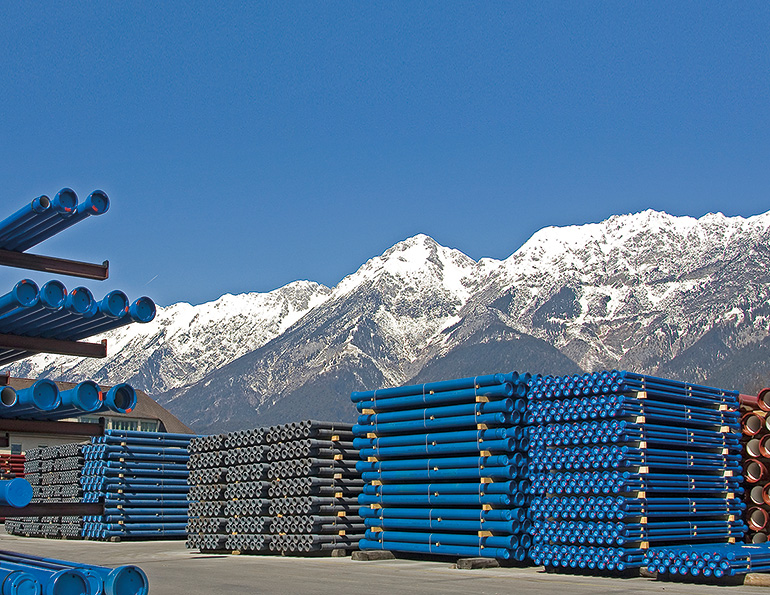 Stacks of ductile iron pipe await shipping in the TRM pipe yard in the Alps.

“Welding on a 12-inch pipe is 3.1 foot around and might require five passes,” Ryan points out. “That welder is moving 15 feet around that pipe. The joint connection with ductile is way faster.”

Zap-Lok speeds steel installations. Some companies have been looking to bring the ease of a mechanical joint to the world of steel pipe, such as Zap-Lok, a bell and spigot mechanical fit with an epoxy sealer. Unlike the ductile joint, which is formed manually, Zap-Lok uses a hydraulic machine to press fit the pipe connections.

“It’s extremely fast compared to conventional welding,” says Tatro’s Day. “When you have a lot of long, straight runs, or you’re doing large numbers of trails or large footages, [Zap-Lok] can get it done way faster than with welding.”

Tight time frames. That installation speed can be a significant benefit for ski areas that have short construction windows. “We often need to be able to get in and work in between seasons, so the Zap-Lok is both a time and money saver,” says Day.

Ductile iron installation can be quick, too. At Sunday River, Maine, two miles of 16-inch PNP ductile pipe was installed in two months during the spring of 2018. The install finished ahead of schedule and under budget, and was done entirely by in-house personnel. 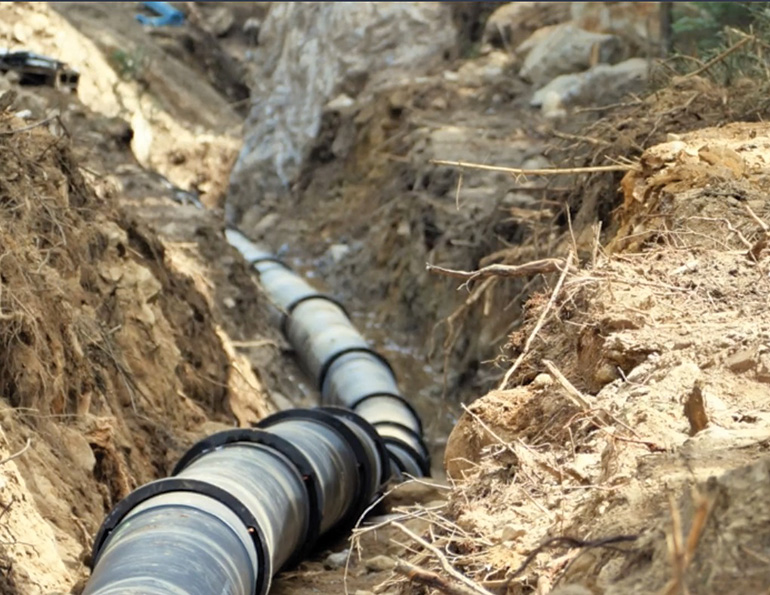 Ductile iron pipe’s flexible joints allow a pipeline to flow with the contours of a trench, such as this one at Sunday River, Maine.

Sustainability. In addition to saving time and potentially money, the smaller construction footprint of a field-welding-free installation (or at least a field-welding-reduced installation—Zap-Lok doesn’t do corners, says Day) can also help minimize environmental disruption.

PNP touts ductile, which is made from 96 percent recycled materials and is 98 percent recyclable, as the most sustainable pipe on the market thanks to its life expectancy of 100+ years. That longevity, combined with the ease of assembly/disassembly, also makes ductile simple to relocate, says Alford. “After 10 years, if you want to increase your capacity, you realize pipe is being underutilized, you can relocate ductile pipe. Steamboat has relocated pipe three times.”

Challenges with ductile iron. “The challenge with ductile is that it’s lego-like,” says McPherson. “If you are missing a part that you need badly, the project stops.” Ductile fittings are manufactured in Europe, so sourcing parts requires time and can incur shipping costs.

Steel is easy to source in North America, and, because it can be welded, it’s also easy to repair. “With steel you can just dig up a small section and patch it,” says McPherson. “With ductile, you have to replace the whole section,” which might be 15 to 30 feet long. 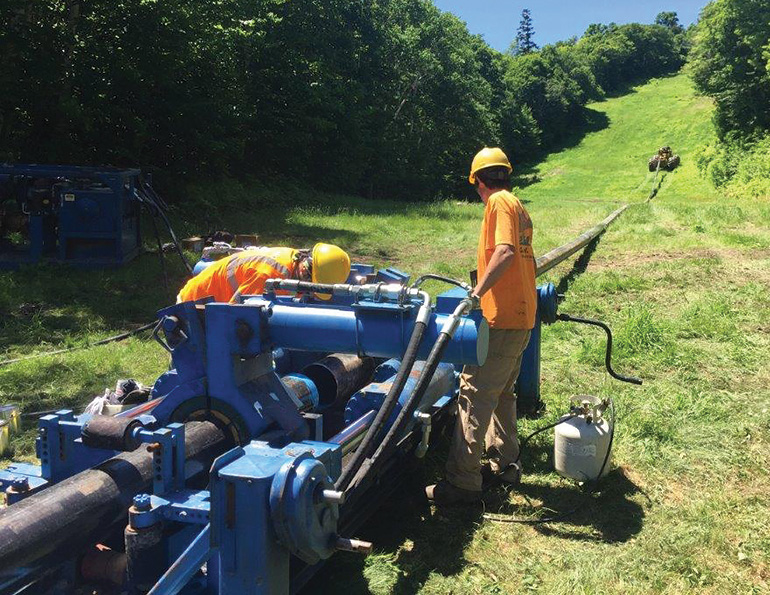 A crew installs 580 feet of eight-inch steel pipe at Stowe Mountain Resort, Vt., with connections secured via the Zap-Lok system.

The modular nature of ductile also means that cutting into it in order to, say, add an extra hydrant, can affect the integrity of the pipe. “With ductile, you are committed to a very accurate plan and path,” says McPherson.
“When you are putting hydrants in, it’s easy with steel,” says Ryan. “There is more forethought that goes into installing hydrants on a ductile pipe.”

So how should resorts think ahead? “The most important trails get the most investment,” advises Ryan. He and VanderKelen both recommend resorts classify terrain into primary, secondary, and tertiary. “A critical feedline is different from a trail you make snow on once and then let Mother Nature take over,” says Ryan. “You probably don’t need the same pipe on those trails.”

“Your mainline is a good place to spend the extra money up front,” says Day. “The less you have to dig them up to maintain them, the better.” 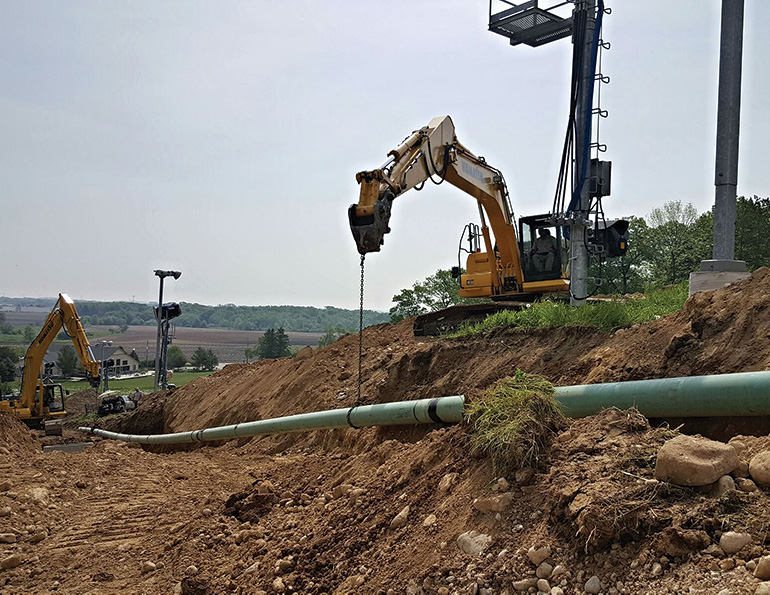 “If you have corrosive soil or straight line runs that don’t have a lot of hydrants, that ductile pipe can be a really good answer for that,” notes VanderKelen. Conversely, “if you are going with surface piping, ductile probably doesn’t make sense,” he says. Since soil corrosivity isn’t a factor, “that tends to be just bare steel pipe.”

A blended infrastructure is a very real option. “Each manufacturer has transition parts so that you can integrate different types of pipe,” notes McPherson. That means a resort can tailor the type of pipe used to particular uses and locations where one type has distinct advantages. As resorts seek to maximize snowmaking capabilities and reliability, this flexibility may become ever more important.