How to handle ever-increasing uphill traffic. 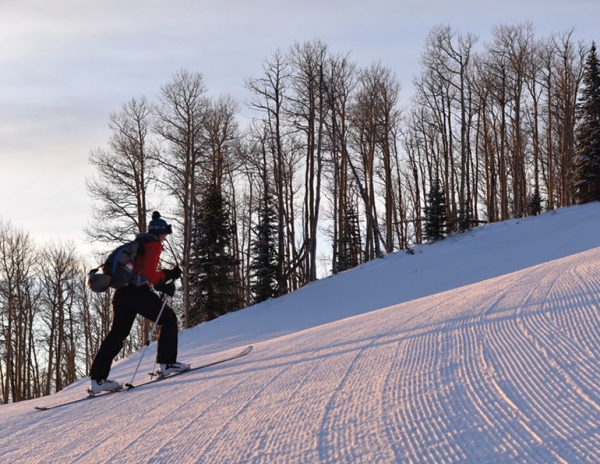 In preparation for the winter of 2021-22, and in response to increasing demand, Vermont’s Sugarbush Resort expanded its uphill travel offerings. While uphill remained free of charge, resort management—having experienced a few near misses over the years involving uphillers and equipment—clarified routes and timeframes for uphillers on its Lincoln Peak trails and, for the first time, built a route on its second peak, Mount Ellen, which uphillers could access 23 hours per day, with uphill not allowed during the 4 p.m. hour for sweep.

“We wanted to give people options,” says John Bleh, Sugarbush director of public relations and communications.

Unfortunately, all did not go as planned, and a few bad eggs spoiled the fun. Sugarbush made the call to suspend uphill travel on Jan. 20, posting this message on its Facebook and Instagram feeds:

“Attention uphill travelers: effective immediately we will be suspending uphill travel at both Lincoln Peak and Mt. Ellen outside of [lift] operating hours. … Unfortunately, we have experienced several incidents this season with guests not abiding by our uphill travel guidelines. … We ask that you help spread the word on our uphill policy and proper etiquette, and we are hopeful we can open it back up in the near future.”

What happened next wasn’t difficult to predict: An avalanche of passionate comments erupted from the local uphill community. The ultimate result, however, was encouraging: “We got great feedback,” says Bleh. And uphill traffic resumed just three days later.

Bleh admits the “great” feedback wasn’t all positive. Uphill enthusiasts expressed anger, disappointment, desperation, and denial. But they also expressed a willingness to work with resort staff and hold each other accountable—and this, says Bleh, ultimately influenced management’s decision to reinstate uphill travel.

Sugarbush is, of course, not the only resort where people are clamoring to go uphill. And as Ryan Lavoie, director of risk management at resort insurer MountainGuard, points out, neither the act of skinning uphill nor the challenges around it are new. “What’s new,” says Lavoie, “is the explosive growth of uphill in the last five or so years—and definitely, with Covid-19, the last two years.”

Alpine touring is the fastest growing segment of the ski and snowboard industry, according to Snowsports Industries America. Ski mountaineering (skimo) will become an Olympic sport in 2026. Aspen Skiing Company has 7,000 people on its email list for uphill travel updates. Dawn patrols, lunch laps, and moonlit tours are regular occurrences everywhere. The approaches for handling uphill traffic, though, vary depending upon the nature of each operation.

Sometimes, operators and enthusiasts clash. A few uphillers stray from designated routes; some bring dogs when they aren’t allowed; others ski too close to groomers and winch cables. In 2021-22, highly publicized—and unfortunate—situations included poachers at Eagle Point, Utah, and an uphill event at Black Mountain, N.H., where the public consumption of alcohol threatened the resort’s liquor license, in addition to uphillers continually disregarding the mountain’s $10 uphill fee.

Both ski areas reacted swiftly and strongly with social media posts outlining their responses to the incidents. Eagle Point, which is on private land, opened an investigation into the matter with the Beaver County Sherriff’s office. Black Mountain suspended uphilling to non-season passholders for the rest of the winter. Enthusiasts—as well as others with no interest in winter recreation—weighed in on social media, with many shaming the resorts. In neither situation was the outcome ideal, begging the question: How can resorts encourage more cooperation and collaboration?

Minimize friction. Colorado’s Sunlight Mountain Resort, which bases its uphill policies on those of some of its larger neighbors, uses education as a tool to minimize friction. “We see no reason to turn this influential demographic away,” says marketing and sales director Troy Hawks. “But we do see value in educating them.”

Efforts include the “Preserve the Privilege” campaign that accompanies Sunlight’s Uphill Passport Program, which says: “The goal of the passport program is to PRESERVE THE PRIVILEGE of uphilling while preventing accidents and injuries, as well as establishing and maintaining a communicative dialogue with uphill users.”

Another area for education Hawks sees: the popular misconception that resorts located on public lands have no right to restrict or limit public access.

“As a condition of their permit, resorts are required to submit an annual operating plan for Forest Service approval,” explains Shelly Grail Braudis, acting mountain sports program director for the White River National Forest (where Aspen, Sunlight, and Vail are located). “Resort uphill policies are included in these operating plans, and each resort has their own uphill policy based on resort operating needs, safety, and location.”

Communication is key, says MountainGuard’s Lavoie. “Resorts can’t overcommunicate. The guest is vital; you have to communicate your expectations and get guest feedback.”

Such is true for the uphill crowd as much as any area of resort ops. Jonathan Shefftz, who has been involved in uphill travel for decades as a patroller and the director of the NE Rando Race Series, which brings uphill races to resorts across New England, says, “I find it disturbing when uphill routes that have been open for years get shut down for no reason.” 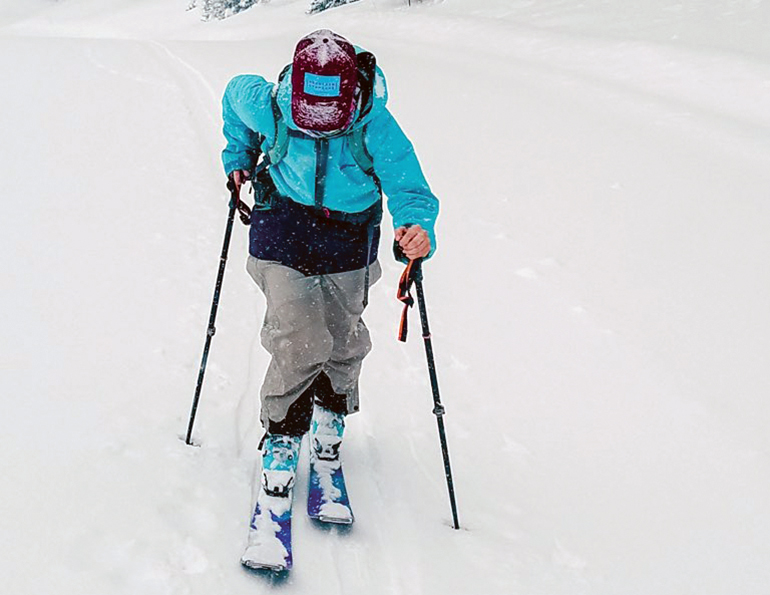 Guests, like this one, who properly utilize the designated uphill routes at Sunlight Mountain Resort, preserve the privilege for others.

If there are guests like Shefftz who don’t understand the “why” behind decision-making, it falls on resorts to communicate. Signage, uphill route markers, social media posts, email blasts, and Facebook groups are just some approaches. Hawks says Sunlight has an email list of 700 uphillers, and messages to the group only include uphill info, no marketing at all. Remember, people will make decisions based on the information they have, so it’s imperative that they understand the dangers of winch cats, avalanche control, blind rollers, etc., before they head to your hills.

So, how can a resort craft an effective uphill policy? “There is a spectrum of approaches,” says Lavoie. These range from, “We don’t allow it at all” to “You can go anywhere you want, anytime you want.” Some resorts charge; others do not. “There are so many right ways to handle uphill,” adds Lavoie.             » cont.

These decisions depend on a variety of factors: the layout of the trail network (are there blind rollers, for example?); density of moving machinery (like snowmobiles or groomers); skier and rider traffic patterns, flow, and density; and avalanche control work, to name a few. Individual resorts must figure out what works for their unique operation.

Routes and passes. Uphill passes often serve as a means for ski areas to ensure those who are participating are aware of risks, routes, and rules. They also manage traffic. An uphill pass at Sugarbush, for example, is free, but uphillers are required to have one and must sign a form acknowledging they understand the uphill policy. Eldora, Colo., also requires uphillers to have a pass. There, a 2022-23 uphill season pass is $199 (included in regular season passes);  a day ticket was $32 this past season. Passholders are allowed early access, 7 a.m. to 9 a.m., Monday – Thursday; day ticket holders can skin up 9 a.m. to 4 p.m., Monday – Friday.

Aspen Snowmass has routes designated for uphill travel at all four of its mountains—Aspen Highlands, Aspen Mountain, Buttermilk, and Snowmass. All designated routes—which can close depending on operational needs, safety, business levels, or avalanche mitigation—are open 5 a.m. to 10:30 p.m., except the route at Aspen Mountain, which is only open outside of operating hours. Uphillers must buy a season Uphill Pass for $69 (included in all regular season pass products), and the pass must be visible during uphill travel. The resort also provides red flashers for uphillers to don. At Snowmass and Buttermilk, dogs are even allowed before 7:45 a.m. and after 4:45 p.m.

There was a need for the formalized policy. “We started to view [uphill travel] as a possible safety concern about 10 or 15 years ago,” says Aspen Skiing Company (ASC) vice president of operations Katie Ertl. Though it’s long had a local following, Ertl says uphill participation has grown exponentially in recent years.

ASC works closely with the City of Aspen to accommodate the sport, says Ertl. “The city is very interested in having uphill available,” she says. “Especially with it becoming an Olympic sport in 2026,” Aspen can be a training ground.

Balance user interests. Eagle Point, by comparison, has a different business model, economic situation, and, therefore, approach to uphill traffic. Independently owned, situated on private land, not located near an urban center, and not a major destination, Eagle Point is open just four days per week and caters to a small crowd that typically comes for long weekends. This lucky group is at times set up for an epic powder day after the resort is closed Tuesday through Thursday. These “Powder Fridays” have become part of the resort’s identity.

Resort management has tried to find a balance, accommodating uphill skiers while keeping the bulk of its powder skiing for paying customers, says director of marketing Scott Curry. Uphillers are welcomed for free on one designated route for the purpose of access to the public backcountry that abuts the resort. Uphillers can ski down in-bounds only outside of resort hours and only on specific trails. “Otherwise, we would lose a product that is important to us,” says Curry. “We are trying to support the small number of guests who make a significant effort—due to our location—to come.” Uphillers tracking up the trails, therefore, don’t fit in Eagle Point’s business plan. 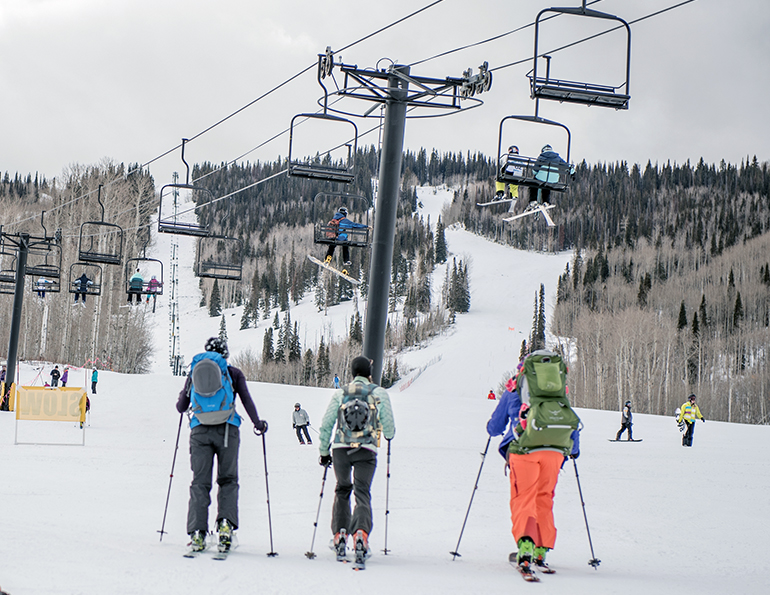 Uphillers and downhillers coexist at Sunlight.

From the insurer perspective, one thing is key in all approaches. “We want resorts to have a policy—a written policy,” says Lavoie. When it comes to developing that policy, Lavoie adds, “The process should be methodical.”

Once a resort decides uphill does work, it should decide where it works—and how. And resorts should feel free to change their plans based on their observations, user feedback, and guest behaviors—always taking care to communicate any changes and the reasons behind them, while also being prepared for a potentially vociferous internet response.

As the pandemic (hopefully) wanes, resorts are seeing increased visitation and a renewed interest in the outdoors. Sales of alpine touring gear are skyrocketing, and—while backcountry tours may give skiers and riders more solitude and adventure—touring in-bounds is easier. Uphill skiers and riders visit resorts for the same reasons as the downhill set—the facilities, the grooming, the snowmaking, the convenience, and the fun. As such, having a good uphill policy has now become part of what resort operators do.

“Ultimately, this is your business, your land, or your operating permit. You need to figure out how to best control it,” says Lavoie. “If you go through a thoughtful process, you’ll be successful.”