It's in the Book

Considerations for your resort's emergency operations plans, who should  be trained to execute them, and why they should not be collecting dust on the shelf. 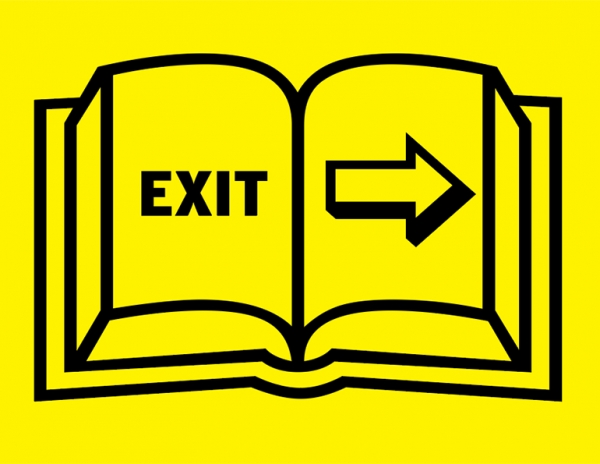 If you’re a SAM reader, you probably have access to your resort’s Emergency Action (sometimes called “Emergency Management” or “Emergency Response”) Plan.

1) Could you put your hands on a copy right now?

2) If you could, how much dust must be blown off of it?

3) Prior to now, when was the last time you did so?

4) When was it last reviewed and updated?

While we’re at it: When was the last time you and your team actually practiced with it—either by way of tabletop exercises, or full-blown simulation?

Having a comprehensive, well-developed plan makes it easier to manage emergencies when a bad moon rises. That’s why resorts on federal land are required to have one. Your insurance carrier wants you to have one, too, though they typically won’t hold your feet to the fire.

“We don’t require one, but they’re strongly recommended,” says MountainGuard’s Ryan Lavoie. “Resorts that do things the right way usually have lower losses, which means better rates on their premiums. Having good emergency plans is doing things right.”

Lavoie’s counterpart at Safehold, Tim Bruce, agrees. “Probably 60 percent of our clients have a plan,” he says. “If they don’t, we ask, ‘Well, what would you do if THIS happened? What does your staff actually know?’ And sometimes, when we go to larger resorts, we find they actually do have a plan, but basically nobody knows about it.”

Therein lies the rub. Emergency plans are typically the province of risk management and/or ski patrol. And we’d bet that beyond risk and/or patrol, the only other department at many resorts that pays any attention to emergency plans is security.

That’s a problem, because a major event at a resort can happen anywhere on the property, impact any and all departments, and occur at any time of the year. Outhouse luck being what it is, that event might even happen when the only people who really understand the plan are on vacation. Unless your staff knows about the plan and their roles in it, you’ll be in deep…well, you know.

Successful implementation of an emergency plan depends upon having good people who have been trained to understand their roles. Your approach is your choice, but you should consider the basic National Incident Management System (NIMS) structure codified by the federal government. This model is used by all first response agencies, most every organization that accepts federal dollars, and a growing number of private businesses. Among other things, it sets out a basic operational format that’s logical, scalable, and flexible. 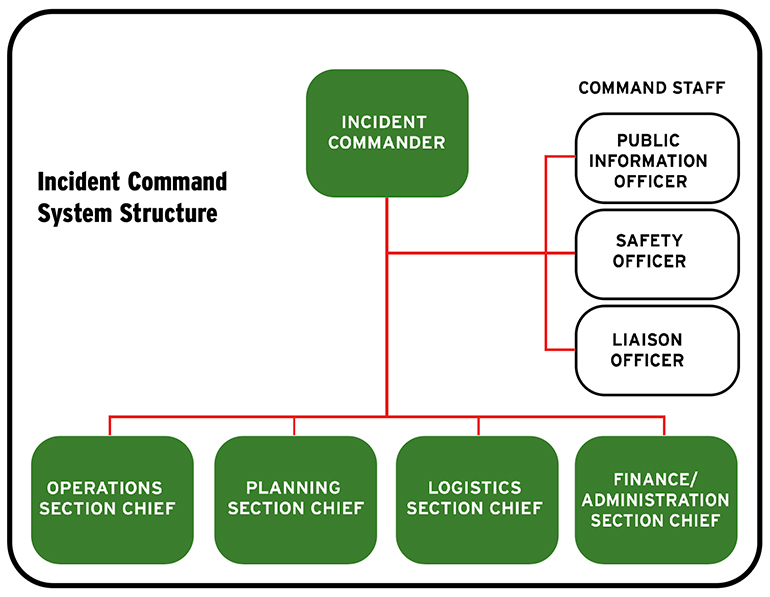 Each of the roles (other than incident commander) listed above can be expanded to include other key functions. For example, the operations chief is typically assigned responsibility for setting up triage and staging areas, overseeing roadways, and so on—all through subordinates. In the case of a ski resort, the PIO, or public information officer, may be at the top of the food chain when it comes to working with families and staff notifications. That part is really up to you.

NIMS training. For our industry, the National Ski Patrol is now requiring all patrollers to pass basic NIMS training. It’s free online through FEMA, and classes may be offered by your local first response agencies. It's smart to involve those local agencies in your plan’s creation; they can be enormously helpful. Both Safehold and MountainGuard are also eager to help you develop a plan—or improve the one you already have. Both groups have human and physical resources to assist you in that effort.

WHAT SHOULD BE IN YOUR PLAN?

As Lavoie puts it, “Plans can vary depending on the size and sophistication of the resort. At minimum, it’s a good idea to cover the ‘big basics’: fire (both structure and wildfire), catastrophic events, lost kids, helicopter transport. But do you have a codified plan for what to do if the power goes out? Do you have lightning protocols?”

Take threats seriously. Safehold’s Bruce notes that “what happened at Sierra-at-Tahoe (Calif.) last year was an eye-opener for the industry. One of the problems we face as an industry is that we need to take threats seriously, create plans accordingly, and execute. That’s the problem: Ski areas often don’t think things are going to be an issue until they happen. As an industry, we also tend to be slow to react, and risk managers are often seen as Debbie Downers.”

When we spoke with Bruce in late May, wildfire was threatening Sipapu ski area in New Mexico. As of this writing, the resort was still intact. But during the greatest period of threat, it moved all possible assets—snowcats, rolling stock, IT infrastructure, etc.—to safety. That, according to Sipapu marketing director Christiana Hudson, was done according to the resort’s emergency plan.

But wildfire is also a risk in places with much higher normal summer rainfall. And in some of those places, flash flooding is also a possibility. Consider Tropical Storm Irene in 2011. Killington, Vt., lost a major portion of its K-1 Base Lodge when concrete pilings were washed away. Over in the Catskills, Windham Mountain was literally and figuratively dark for about a week, because water funneling down the hill went through the base lodge and took out communications gear.

Consider your risks. A well-thought-out emergency plan won’t stop the rain, but it can help you identify system redundancies that keep you up and running. In other words, think in terms of the emergencies—major and minor, natural or human-induced—that threaten your resort. Think severe weather, think bomb threats, think active shooter, think serious data breach.

Be realistic, though. Yes, there’s a chance that your maintenance barn could get flattened by a falling piece of Soviet-era space junk, but it would be a waste of time to plan for that one. Better to plan for major structural damage—fire, collapse, water. That plan should be close enough to work for the satellite, too.

How you format your plan is really up to you. But everyone we spoke with—insurers and resort risk managers themselves—agrees with this much: Your plan should include a simple mechanism by which a staff member can activate the team.

“To me, our call-down list is the most important part,” says Matt Thomas, previously general manager at Pennsylvania’s Roundtop Mountain Resort and now risk manager at Telluride in Colorado. “If I had nothing but that list, we could manage an event, because we’ve got the people to do it.”

Who is doing what? This is where thinking in terms of NIMS can be helpful. Those roles can help you determine who’s going to be responsible for what. Again, think redundancy: Emergencies aren’t respectful of days off, so you’ll want to flag several people capable of handling each potentially necessary role.

Some resorts do this by way of job title. Others flag specific individuals. Some do a mix of both. On the plus side, if the responsibility area goes with job title, updating the plan is a bit less time sensitive. But consider that the entire NIMS concept includes putting the best-qualified people into each area of responsibility, and that might not necessarily dovetail with a specific title—or that title holder’s days off.

Specificity required. The real nuts and bolts, though, are in managing the steps of specific types of incidents, because that’s how you make sure things are actually thought through.

“When I got here five years ago,” says Jeannine Mogan, risk manager at Giants Ridge in northern Minnesota, “there was a plan in place. I ripped it up and started over. It wasn’t realistic. It said high-level things like ‘get people out of the building,’ but it didn’t say how or where they should go next. Plans should be written in such a way that the staff can easily understand them and actually do what’s required.”

“We have a global plan for the entire resort, as well as department-specific ones,” says Joe Bolduc, risk manager at Michigan’s Crystal Mountain Resort. “We include things like building evacuations—the routes, and where the guests are taken.”

Some resorts maintain their plans as single standalone documents. Others, like Crystal, set each item up as a separate document and bind them together. By doing this and date-stamping each, one can update individual components of the plan without having to re-print the entire thing, sending only the revised section to staffers who keep print copies of the plan.

Notice the word “print.” By all means, keep your plan on a shared drive, but you’ll need print copies if the emergency knocks out the power.

Emergency plans are living documents. People come and go, including those identified as having key roles. And needs and protocols change with time. Plans should be reviewed and updated at least annually, and most resorts who are diligent with their plans use that approach.

Bryce Mountain Resort in northern Virginia is more aggressive. The resort’s safety and patrol director, Glenn Jackson, is a retired Fairfax County Fire Department lieutenant. His entire patrol has undergone advanced NIMS training. “We review the plan four times a year,” he says. “We do major reviews prior to the start of the winter and summer seasons. We do more minor reviews midway through those seasons.”

Jackson also reviews his plans after major incidents, and adjusts as necessary. “That’s something you learn in the fire/EMS world,” he says. “If you’re not critiquing yourself, you can’t do a better job. You have to do something that corrects a need, and then you need to implement it and train for it, and follow-up to make sure your plan is doing what it’s intended to do.”

Training is critically important. The resorts we spoke with all use their plans during new staff on-boarding; most use some mechanism of online presentation. And most also drill periodically through the season, using either online or tabletop training sessions. Covid has limited most resorts’ ability to conduct in-person simulations involving local first response agencies of late, but those can be of significant value in developing relationships with those agencies and helping them have a better idea of what goes on at the resort.

Everything discussed here is operationally focused. But one of the key roles in emergency response management is that of the public information officer, or PIO. Once an afterthought, it’s now considered sufficiently important that NIMS protocols have the PIO reporting directly to the incident commander.

We’ve seen resort emergency plans that were otherwise quite well thought out—except for that part. The instruction with regard to communications? “Contact marketing,” with nothing further to guide marketing with their task.

Setting up an emergency communications plan that dovetails with your global emergency plan is a significant process in itself. You can find some thoughts on that in the SAM archives (“What to Say, and How to Say It,” July 2015). 57

Suggestions for events to include in your plan. Not all here may apply, and you may have specific needs that aren’t listed below.

Accusations of Racial or Sexual Discrimination