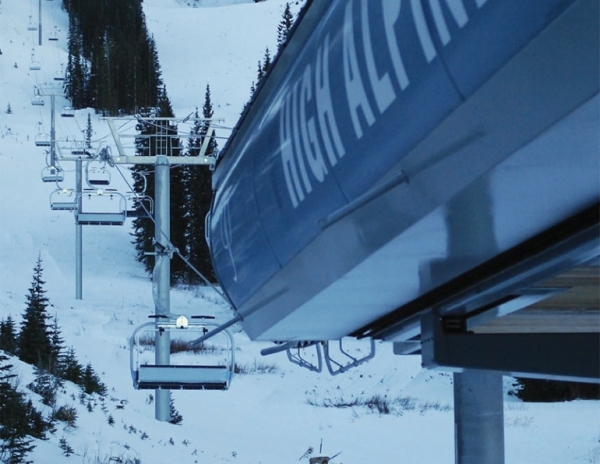 The past year saw the fewest number of aerial lifts installed in memory——16. Is this the new normal?

Perhaps, perhaps not. “It was just an unusual year,” says Mark Bee, president of Doppelmayr USA. “Next year will be better. There are a lot of significant, solid projects on the radar.” Leitner-Poma’s Jon Mauch had a similar reaction: “It looks good so far for next year. We’ve had more inquiries for bigger machines, six-packs and gondolas.”

Jan Leonard of SkyTrac is not so sure. “Look at the Kottke [economic] report. Resorts do not have big spending plans,” he says. He sees scarce capital going into summer operations and snowmaking.

With so many demands on capital, resorts are squeezing more efficiency from their lifts, new and old.

Instead of purchasing new machines, Stratton, Stowe, and Whistler put new cabins on major gondolas. Triple Peaks replaced a detachable quad at Okemo and relocated it to Mount Sunapee.

Loading conveyors are another option for efficiency. Chairkit installed six, serving more than a third of all new lifts—four on fixed-grip quads, two on detachable six-packs—plus one retrofit.

“With detachables, the loading conveyor provides a realistic opportunity for the lift to achieve higher design capacities,” says Chairkit’s Marc Wood. “On fixed-grips, it is more about consistent and easy loading, which minimizes stops and keeps operating capacity up.” With nearly 50 installations across North America, their utility is well established.


AERIAL LIFTS
Leitner-Poma installed four detachables, plus a pulse gondola at Royal Gorge, Colo. The detachables include a six-pack at Breckenridge with a loading conveyor and a capacity of 3,600 an hour, and a heated, bubble six-pack at Okemo that can move 3,000 an hour. “Those creature comforts are becoming more important,” says Mauch.

Doppelmayr put in six lifts, including an unusual combination gondola and chair at Beaver Creek. The Centennial gondola-chair (25 10-passenger cabins and 125 six-person chairs), 7,800 feet long, with 2,100 vertical and a capacity of 3,400, was the biggest install of the year.

SkyTrac delivered three quads (two with loading conveyors), two triples, and a double. “With the cost of detachables, resorts are looking at a fixed-grip quad and loading conveyor as an alternative,” says Leonard.

All three of the aerial lift companies are also doing more renovations of existing lifts. And not just their own. There are hundreds of orphan lifts across the country, “and we’re doing more refurbishing of them,” says Bee. “It’s work we are happy to have.” Both SkyTrac and Leitner-Poma echo that sentiment.

Magic Carpet saw an increase in installs. Jennifer Kelly attributes that to the popularity of Carpets for tubing, with several installations in the Midwest and Mid-Atlantic.

Star Lifts’ 20 installs were in line with its long-term numbers. Pete Kavanaugh reports two trends: more installations for TBL areas, and more surface lifts for learning areas—they are a step up from conveyors for skiers and riders who have gained more skill and want a faster way up.


BEYOND WINTER SPORTS
Increasingly, the aerial lift companies are finding projects outside of winter sports. Leitner-Poma is building a small aerial tram at the SalesForce tower in San Francisco, as part of a transportation center. The 30-person cabins will operate on demand, like an elevator.

In that same vein, Doppelmayr has completed a major project with Universal’s Harry Potter World, building major components of the two-train, four-car Hogwart’s Express. The company also built components of a three-mile-long connecting train at the Oakland airport.

In short: Lift companies, like winter resorts themselves, have been looking beyond their traditional customers for growth opportunities.