SAM surveyed media buyers across the U.S. to discover how and where they commit their marketing dollars.
Written by Staff | 0 comment


SAM’s first media buying survey, conducted this summer, shows how broad the media marketplace has become. The mix of traditional and social media gives marketers more tools than ever for spreading the message and connecting with customers. A total of 70 resorts took part, and they mirror the overall resort landscape closely.

One of the biggest surprises is that regardless of size or region, resorts are using the media options in similar ways. It doesn’t appear that larger areas are doing more in social media, say, or that smaller resorts rely more on local newspaper advertising. Another surprise, as Jay Peak marketing VP Steve Wright puts it: “Apparently and for some reason, folks love billboards.”

Other observations: “Radio is still a popular choice for getting the word out and creating awareness,” says Sam Rufo of nxtConcepts. “Radio stations are also more willing than the other channels to still do trade, to supplement the ad budget. That makes it more affordable than TV. But for those that can afford TV, it’s still one of the best ways to visually engage consumers.”

As for increased ad budgets, “That’s not surprising, for two reasons,” Rufo adds. “First, today, there are many more places to advertise than just a decade ago. And, because of that, it’s also more competitive to stay top of mind in an already crowded area.”

Online advertising continues to grow. “That’s due to the value, reporting, and extreme targetability available to advertisers online,” Rufo believes. “That also coincides with the increase in the number of resorts using new ad options, such as retargeting and mobile.”

Social media, search engines, and mobile are, by far, the top three outlets for online or interactive media. There are very few resorts streaming music services, video being a lower percentage as well. Still, digital video is an area of interest for future online creative for 53 percent of respondents.

Resorts are reviewing their options regularly. “We are facing increased competition with our paid search efforts and are starting to move away from it,” comments one respondent. Another asks, “How saturated is the digital landscape, and might it create some return to more traditional mediums?”

Yet another respondent focused on efficiency, saying, “Our research (conducted by our media planning agency) shows that, for outdoor enthusiasts, TV is the least effective medium for us to invest in. It’s expensive and the ROI is low. Digital/social and Internet radio are most effective.”

One thing’s for sure: resorts are working hard to keep current on a volatile and fast changing marketplace. 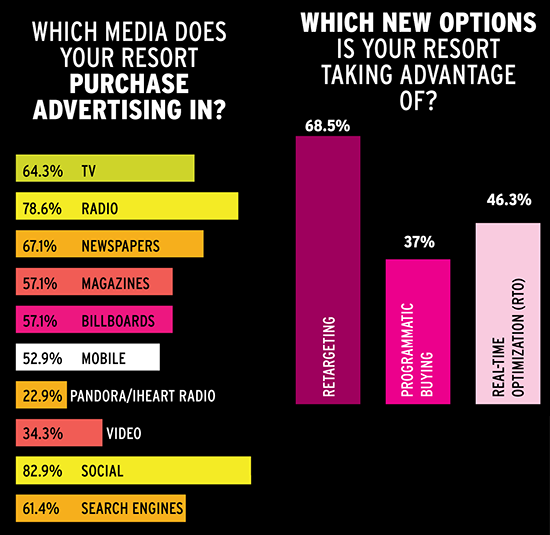 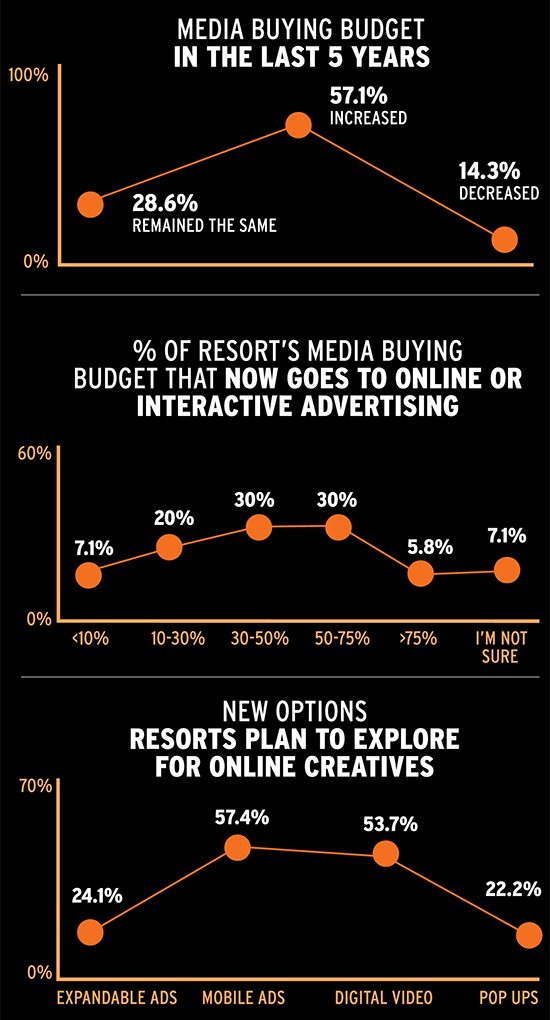