Eldora Gets Closer to Its Core 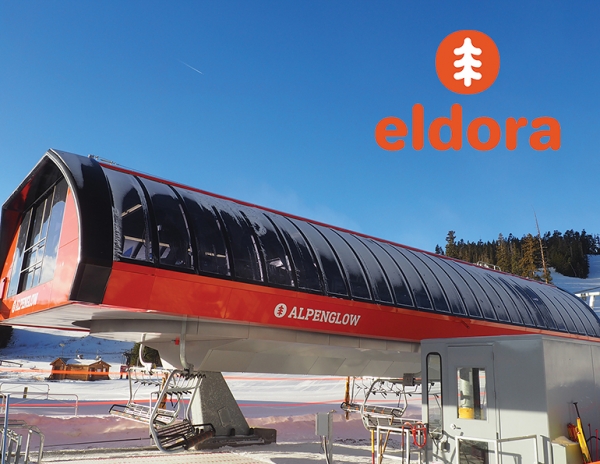 With snowfall about 50 percent of normal this season, Eldora Mountain Resort picked a rough winter to unveil a $10 million expansion, the largest one-time investment in the 56-year-old resort’s history. That coincided with a rebranding of the resort, aimed at overhauling its aesthetics and strengthening its ties to the local community.

Anchoring the rebrand is a $6 million burnt-orange Doppelmayr six-pack, the shiniest emblem of a push to re-establish the 680-acre ski area as Boulder County’s backyard playground. The rest of the play is relatively unpretentious—the main lodge has been detailed with lots of weathered wood and the menus feature local fare—and arrives just as the resort industry divides into two distinct camps in a looming clash of titans.

Eldora’s focus on locals worked well in the winter that wasn’t. The Powdr-owned hill will finish the season a touch below last in terms of visitation, but ahead on the financial side.

“We feel pretty blessed and lucky. There are not a lot of resorts in the West who are saying that right now,” says Eldora’s general manager Brent Tregaskis, the veteran ski area boss spearheading the resort’s renaissance that began when Powdr acquired it in 2016.

Local Alignment
Powdr’s marketing team, led by Megan Fearnow, directed the rebranding (as well as a similar effort for Copper Mountain). The team designed the new logo and framed the allied “Closer to You” marketing campaign.

The effort was born after hundreds of interviews with Eldora employees and customers. “The words that kept coming up over and over again were ‘simple’ and ‘charming’ and ‘rustic’ and ‘close,’” Fearnow recalls. In that sense, the new tagline practically wrote itself.

The survey respondents described Eldora as not just close in proximity, but close as in beloved. “Close as in a good place to start. Close as in ideal for families. Close to their hearts. It was a double or even triple entendre,” Fearnow says.

Response to the new logo and marketing push has been overwhelming, she adds. And that could well fuel future marketing efforts. “We’d like to see the next evolution of it taking a whole new life where the employees tell the story and customers tell the story and it really becomes less about us orchestrating the storytelling and more about just letting everyone else tell their stories about Eldora,” Fearnow says.

“That fact alone has just blown our local skiers away,” says Sam Bass, another ski industry pro who leads Eldora’s marketing. “We are seeing an overwhelmingly positive reception in the community to the rebranding and the feeling of the resort and the vibe we are putting out there. And the new lift especially.”

Staying True to Message
While the speedy lift is the most tangible evidence of a new buzz at Eldora, it’s only a piece of the overarching overhaul. The Tregaskis team had a local Boulder County lumber mill transform the trees removed when the resort built new runs and the new liftline. That timber now lends what Tregaskis calls “a cabiny feel” to base area lodges. There are earthy colors and weathered barn wood siding alongside wrought-iron accents. The white plastic cafeteria tables and folding chairs have been replaced with thick-timbered farm tables and benches.

That same wood has replaced just about every sign at Eldora as well, ending a hodgepodge of signage that evolved over several decades of managers keen to make an impact without spending too much.

Tregaskis is proud of his back-of-the-house work, too, which includes gutting and rebuilding the heavily trafficked bathrooms. He says “no less than 200 people” have come up and thanked him personally for the loo renewal alone.

“Yes, we spent a lot of money here in the last two years, but the overwhelming comments from our guests are very, very positive, and they absolutely appreciate where we are spending money,” Tregaskis says. “Combine that with our new campaign of being more core and more Colorado, and I think it’s been well received.”

Bass has helped steer a hyper-local marketing campaign that aims to establish Eldora as a craft Fat Tire (a local craft beer favorite), thriving in the shadow of skiing’s Budweisers and Coors Lights. With the “Eldora, Closer to You” campaign, the resort is tapping the spirited support for all things local in Colorado.

The not-just-geographic “Closer to You” Eldora message is that anyone with a focus on local should expand beyond eating, shopping, and drinking, and explore local skiing. Not all the time, of course. No need to eschew the mega resorts up the road, including Powdr’s own Copper Mountain. Eldora isn’t trying to grapple above its weight class. But if there’s a couple free hours in the workday, why not go bang high-speed laps at Eldora, or catch a quick early-morning skin thanks the resort’s recent embrace of uphill traffic?

Eldora, which Tregsakis says could see even more investment in the next decade, is the tip of the spear for Powdr’s push to elevate each resort on its own, not as part of a larger collective. It’s a craft-but-not-small strategy that has Powdr—with its nine mountain resorts hosting 3.5 million visits a year—as a curator of character; a polisher of popular peculiarities.

The local’s approach includes food, with a popular Denver chef guiding Eldora’s revamp of cafeteria grub. The new menus include Front Range fare, with local beers and baked goods. It’s about creating an experience similar to what Front Range skiers might find in their own communities, Tregaskis says.

And Eldora is becoming a better neighbor. The resort celebrated uphill traffic this season, a shift from the previous ownership that saw more liability than revenue in hosting hordes of skinning skiers. Tregaskis asked the gravity-fighting skiers to pay a bit for an uphill season pass, and that revenue has offset costs of signage and ski patroller work. “It’s the right thing to do and it’s revenue neutral, and we got back some feeling from the community,” he says.

On-Mountain Growth
There’s more to come, too. Last December, Eldora and Powdr reached an agreement to shift growth plans away from sensitive areas around Middle Boulder Creek and develop more learn-to-ski and intermediate terrain within the resort’s existing Forest Service boundary. That ended two years of negotiations with environmental groups that had opposed the previous owners’ plan to expand the resort’s boundary and develop skiable terrain in an ecologically sensitive watershed.

“Future development will be done responsibly and in ways that protect and preserve where we love to play, and we’ll double down on what our guests love—that we are the best place in Colorado’s Front Range to learn to ski and ride,” Tregaskis said last December when he announced Eldora’s agreement with Boulder County, the Sierra Club, and the Middle Boulder Creek Coalition.

As the brewing battle between the newly formed Alterra Mountain Co. and Vail Resorts promises to forever change the ski resort industry, Eldora and Powdr have aligned with Alterra, joining the collective of 26 resorts on the new Ikon Pass. Under the previous owners, Eldora dabbled with Vail’s Epic Pass. That lasted one season, 2013-14, before Eldora’s owner backed away from the partnership, citing crowds and overwhelmed facilities.

Eldora had been part of the Rocky Mountain Superpass since 2014-15, offering unlimited skiing along with Copper Mountain and Winter Park. It goes away next season, and Eldora becomes part of a much broader pass.

The $899 Ikon Pass “is a great thing for Eldora,” says Tregaskis. (The area will offer its own, more affordable single-resort passes, too.) “It opens the portal to so many more people. It’s a legitimate pass if you are a Coloradan,” he says.

Those customers are making it a point to tell Eldora’s leaders they appreciate the recent investment and upgrades. It’s a pretty rare day for Tregaskis or Bass to not hear from a happy Eldora local. “I think people who feel ownership over the place after skiing here for a really long time, they see this all as good change,” Bass says.

Denver musician and real estate broker Brian Baxter embodies that feeling. “It’s so much better. The old lift stopped all the time. So it was closer to 20 minutes sometimes,” Baxter says. “Now it’s four, five minutes, and the lift never stops. You can do 100 laps in a day if you want. With that, and the new food, better lodge, it’s a pretty good little mountain.” And it’s so close to home.