An accurate and timely daily snow report is absolutely critical to success, but is still a work in progress for many. 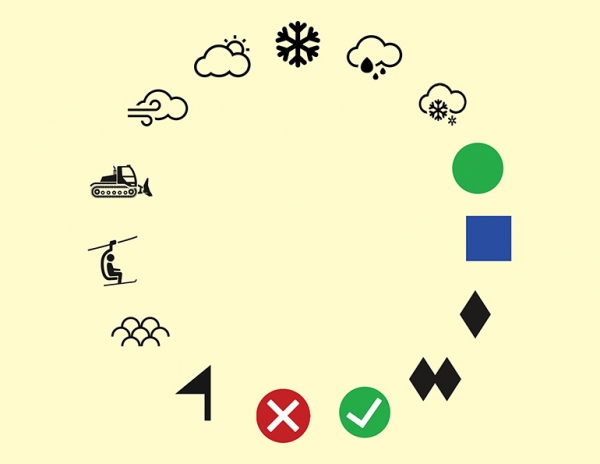 What gets reported every day in a snow report is relatively consistent. How, when, and where it gets reported, though, is all over the map.

The snow report might be a detailed message that’s delivered across multiple channels and updated throughout the day, or it could be a simple web page that shows how many trails and lifts are open. Regardless of its reach or scope, the snow report is often a resort’s most important communications tool.

It hasn’t always been used well. I started snow reporting twice a week at Mount Snow during the days when it was owned by American Skiing Company. ASC had very strict rules about how its resorts should report the weather and conditions. If “wind,” “rain,” or “cold” were used in a snow report, someone from corporate would call, with a stern directive to change the message.

Sugarloaf marketing director Ethan Austin, another ASC alum, remembers it well. “It was dumb,” he says. “I started snow reporting in 2005, which was still part of the ‘rain-is-a-four-letter-word’ era. This coincided with the beginning of the ‘get-filleted-on-social-media-for-lying’ era. It was an interesting time.”

In the ’90s, after questionable moves by Killington and Vail made consumer headlines and brought the industry’s dishonesty to the fore, SAM founder David Rowan wrote, “Alas, this is no climate for the honest and conscientious. The meek may inherit the earth in the beatitudes, but not in the ski world. Understandably, areas feel they must live by the laws of the competitive jungle where they do business, and right now, honesty is not among the weapons of choice.”

Today, however, more operators see honesty as the best policy. Count Jay Peak GM Steve Wright, whose ski industry career began as the snow reporter at Killington in 1995, among them. “Twenty years ago you might have been able to get away with being some mashup of full of shit/legitimately optimistic,” says Wright. Today, that’s all changed. “There are too many channels that connect to reality,” he points out. 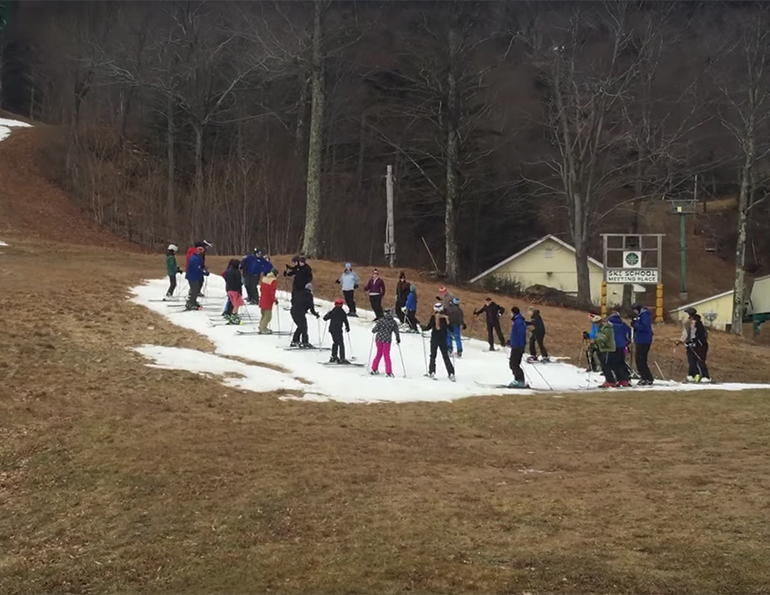 Nowadays, truth in snow reporting builds trust equity, something Mad River Glen embraced in December 2015 when it showed guests “sking the patch,” instead of hiding from the snowless start to winter in the East that year.

Even so, tough weather conditions can push the snow reporter to paint a more-rosy-than-realistic picture as a means to not deter people from coming.

Wright counsels restraint. “I’ve always viewed the snow report as sort of a trust loss-leader,” he says. Jay Peak has published snow reports telling people to visit another day when the weather is better. “I’m willing to sacrifice a few ski days here and there as a result of calling spades spades, because I’m going to get folks to believe me—in spade multiples—when it’s cranking. That sort of trust payoff is important to us and to the brand we care about here.”

Like Wright, Austin believes it’s important to be up front. “Trust is paramount in marketing, and for a ski area trust starts with the snow report,” he says. “If you’re going to lie about something as obvious as the weather, what won’t you lie about? We’ll tell people to sleep in when it’s freezing rain, because we’ll have more credibility later when we tell them it’s blower and they need to get here.”

Being straightforward is also easier than crafting a carefully parsed fib, says Scott Braaten, who started snow reporting at Stowe 10 years ago. “When you are handed a rough day by Mother Nature, I think it’s important to lay out the facts and then let people come to their own conclusions,” he says.

There are some consistent differences in how Western areas approach snow reporting compared to those in the Midwest, East, and Southeast. The biggest: most ski areas east of the Rockies include some sort of narrative in their snow report, and western resorts typically don’t. “The West doesn’t really have as many weather variables that affect operations as much, so a narrative isn’t as necessary,” says Tom Horrocks, marketing communications manager for SnoCountry.

That’s true, most of the time. During an early-season snow drought like much of the West experienced in 2017-18, though, a description of what guests can expect and what the mountain is doing to provide a great experience may have been a good addition to the basic weather report/lift and trail status.

In regions of the country where weather tends to be more variable and can affect operations more frequently, narratives are useful to guests—and ski areas. “The purpose of a snow report is to prepare the skier or rider for their day on the slopes, as well as communicate any recent mountain operations news,” says Braaten.

Some ski areas turn the snow reporter into a trusted resource who signs his or her name to the narrative. Similar to online reviews, getting the info from another human carries more weight.

The narrative can also serve as a marketing communications tool, linking to info about forthcoming events and encouraging readers to buy tickets in advance—so long as that news follows the nitty-gritty of the day’s conditions.

Braaten used to take that approach, but has abandoned it. “We’ve developed other ways to disseminate event information, and the snow report is used more for solely communicating weather and operations news for that day,” he says.

Others simply provide a web page (or pages) with graphics for the day’s weather, recent snowfall, a list of open trails, and planned operations. This information is displayed in a variety of ways—some so simple they look like a spreadsheet, others with dynamic motion graphics and slick design. The latter may look sexy, but isn’t always the easiest to decipher.

And speaking of deciphering ...

What Am I Looking At?

Marketers are creative. Web designers want to put a stamp on their work. Nobody wants to look like the other guy. I get it. But can we all agree that it’s silly for hundreds of businesses in the same industry to communicate the same information dozens of different ways? It’s confusing. Especially for winter neophytes.

Has anyone ever asked a non-skier, or a very casual skier, to try and decipher your snow report page?

Don’t scoff. A person far wiser than I recently said of our industry, “We’re great at talking to ourselves.” We should be great at talking to everyone, core or clueless. If I’m interested in trying something new, but the presentation of what I need to know is confusing, I’m moving on.

Stick with me for a moment. Let’s take words out of the equation, and consider the iconography we use to delineate, say, trail status—open or closed. But first, let’s acknowledge the industry’s three universally published and recognized icons: green circle, blue square, and black diamond. Even a never-ever has a basic idea of what they mean. Unless ...

Just for fun, I did a random check of the snow report pages for 10 ski areas located in nine different states. Three use a green check mark for open and a red X for closed. Perfect.

There are literally thousands of other icons available that won’t be confused for our three universally recognized icons. A green circle on a snow report means easiest trail, even if it includes a check mark, a smiley face, or something else. Steer clear.

And we haven’t even gotten into the art used to signify a groomed trail or snowmaking. To my eye, those little snowcat icons are sweet. Way better than a circle (cough!) with some lines in it.

The Importance of the Aggregates

“Today we have about 4,200 media affiliates that use the SnoCountry feed,” says Horrocks. That’s right: 4,200. Those media affiliates include the Associated Press, USA Today, The Denver Post, Boston.com, OpenSnow.com, Bing.com, and many more. Plus, Google pings snocountry.com every eight seconds; the next time someone searches your resort on Google, real-time data shows up at the top of the page. Know someone who has an Amazon Alexa device? Ask what the snow conditions are at your favorite ski area. SnoCountry provides that, too.

Judging by the lack of attention paid by many ski areas to keeping snocountry.com current last fall, this reach may not be universally known. So: for next season, add this line to your snow reporting training manual (you do have one of those, right?): “Updating snocountry.com is like updating 4,200 different websites all at once.”

Onthesnow.com, owned and operated by Mountain News Corp., is the other big aggregator of snow conditions. It is also reliant on ski area personnel to input up-to-date data on operating status, and also gets a lot of eyes on the information it carries. According to Mountain News senior director Daniel Brauer, onthesnow.com has more than 2.2 million unique monthly visitors.

Both aggregators have worked to improve the experience for both snow reporters and consumers. SnoCountry president Mike Colbourn says the association launched a more user-friendly data widget for 2017-18, and distributed a complete tutorial along with it. Mountain News’ widget allows resorts to customize styling options and detail levels. Both companies have also made it as easy as just clicking a button from resort sites.

As an industry, we’ve made great strides to simplify the guest experience at many touchpoints, but for some reason the snow report hasn’t received the attention it deserves.
The snow report page is one of the most visited pages on your website, if not the most visited. Some operators say the snow report gets nearly twice as many eyes during winter as any other page. Doesn’t that alone make it something we should streamline and perfect?