March snow helped offset a slow start to the season for many resorts, but didn’t erase the early deficit. 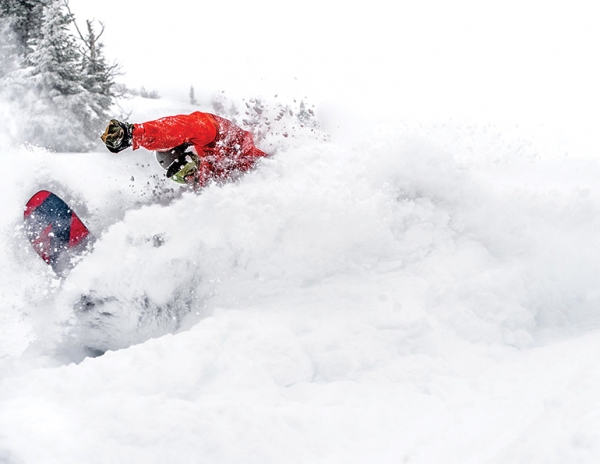 Forget the lion. March was a monster, dumping snow by the foot on both coasts and dragging temps low enough in the Midwest to turn snowguns back on, salvaging a ski season that was beginning to look very dreary indeed. Instead, it ended with war whoops and powder and big momentum headed into next season.

But one month at the end, no matter how great, cannot make up for Christmas, MLK, and Presidents’ week—subpar in many parts of the country, either because it was too cold, too rainy, too warm, had too little snow, or all of the above.

In California, where more than 200 inches of snow fell in March, the late snow was just too late to turn the season around for many resorts, says Mike Reitzell, president of the California Ski Industry Association.

“December, January, and much of February weren’t terribly kind in snow depth,” he observes.

Ironically, because of the March storms, Reitzell says snowfall for the season will probably end up above average. Unfortunately, revenues will not.

“You simply can’t make up for severe amounts of lost business,” Reitzell adds.

The back-loaded season resulted in much the same story across the country: great finish, but was it enough?

“We had a great March,” says Scott Brandi, president of Ski Areas of New York. “But it’s always hard to recover from a marginal Christmas week and losing more than half of Presidents’ week. We’re gaining ground, but I’m not sure to what degree we can say the season was a success.”

“Looking at those two bookends, you’d think we had the best season in history,” says Greg Sweetser, executive director at Ski Maine.

Wrong. Despite one of the best early seasons in recent memory, everybody in the Northeast lost Christmas week because of severe cold.

“Up to Christmas day, we had one of the strongest early seasons in years,” Sweetser says.

It was a similar story in Vermont: “Heading into the holiday break, we had the most terrain open in 10 years,” says Molly Mahar, president at Vermont Ski Areas Association.

But with the week-long Arctic freeze keeping skiers and riders away, resorts came out of Christmas and New Year’s well off the mark. Then came January and freeze and thaw cycles, including the “R” word the Friday before MLK weekend. More R fell in February. Wachusett, Mass., had eight rain events that month.

The first three days of Presidents’ week saw some of the biggest crowds of the season all over the East. But then 70-degree weather hit, and it looked like a fast end to a disappointing season.

“We were on life support coming out of February,” says Brandi.

March was nothing short of miraculous. Four Nor’easters in three weeks dumped 41 inches on Wachusett (more than January and February combined), 83 inches on Mount Snow, Vt., 72 inches on Mount Mansfield, Vt., and 57 inches in seven days on Snowshoe, W.Va.

“We knocked it out of the park in March,” says Shawn Cassell, PR specialist at Snowshoe.

In the Southeast, which did not lose Christmas week, the strong March helped lift most areas to a “normal” or above season.

“We started strong, finished strong. It’s been a good season all around,” says Cassell. Snowshoe, now part of the Alterra collection of resorts, has already announced plans for a $4 million snowmaking upgrade for next season.

“December and January were great, February was down because of warm weather, but March has been strong,” says Chris Bates, general manager at Cataloochee, N.C., which was coming off its worst season since 2002. “It’s been a good season, a little above average.”

Farther north, “average” was more elusive. Although the March crowds were strong and seasons extended, most resorts will not be able to make up all the lost ground.

“After February we were operating more than 10 percent behind,” Wachusett’s Tom Meyers says. “March won’t necessarily bring us all the way back, but it helped significantly.”

For a La Nina year, it was a drier-than-normal start to the season throughout the West.

“We had good precipitation just before Thanksgiving, then rain,” says John Gifford, president of the Pacific Northwest Ski Areas Association. “It held up some resorts opening at Thanksgiving. Most resorts were open by Christmas.”

Gifford says the early season was “decent” but nothing compared to last year. Location was key. Northern Washington, Idaho, and Montana resorts all received about normal early season snowfall; southern Oregon resorts did not—some getting as little as 30 to 60 percent of normal. But as in the East, the snowy March lifted everyone.

“Lessons and rentals were very strong. Ski schools had to turn people away, even in January when there was not as much snow,” Gifford says, noting that growth of the market in Portland and Seattle could be a factor.

The March snow, which began in mid-February in the Rockies, also lifted Utah and Colorado out of a dry early season.

“Resorts did an amazing job coping with lack of natural snow in the early season and getting mountains open on manmade snow,” says Paul Marshall, communications director at Ski Utah. “Before it started snowing Presidents’ week, Deer Valley had 100 percent of lifts and terrain open, and Park City was pretty equivalent. Guest feedback was solid.”

From mid-February on, snow was back to normal (Alta received 45 inches in four days in March).

“Overall, we had a good season,” says Marshall.

Due east in Colorado, it was also a slow start to the season.

“November and December were certainly on the drier side,” says Chris Linsmayer, communications director at Colorado Ski Country. “Generally, it was a pretty slow start to the season. The beginning of the year, and especially February, we got some snow that helped turn things around.”

Linsmayer noted that Aspen Snowmass, Copper, and Steamboat all put in new, year-round mountain coasters this year, as resorts continued to diversify their offerings.

Unlike past years, Linsmayer had no early numbers to report. “March is a big time for us,” he says. “It’s been looking good. But the jury’s still out.”

After two poor seasons in the Midwest, including the worst ever last year, this season brought a “back to normal” verdict, thanks to the snowy, cold March.

“We made snow in March for only the second time (last year being the first),” says Scott Crislip, general manager at Snow Trails, Ohio.

Snow Trails, which added neon lights to its tubing park and a new reservation system, had “some huge event weekends,” and the strong March end boosted early pass sales.

Ditto at Hidden Valley, Mo., which put next year’s passes on sale Presidents’ week and saw a strong response, even though a big warmup that week ended the season. Despite the sudden end—“we haven’t made it to March in three years,” says Josh Phillips, director of operations—Hidden Valley had a better-than-average season, and announced plans for a year-round zip line.

“We didn’t really see the late season snow that Minnesota and Northern Wisconsin did, though we did see the temps that helped us maintain our base,” says Rob Walz, owner and GM of Cascade Mountain, Wis. “Our season ran from Thanksgiving weekend to the third weekend in March, and those bookends work well for Cascade.”

“We were very happy to have a year that ended 11 percent above our five-year average,” he adds. “Weather was mostly supportive of our efforts. We never had the amount of resurfacing events that we saw over the previous two seasons. Our managers also took a hard look at what each department could do to add to our bottom line. We saw many individual departments break all-time records. This truly allowed us to have such a successful year.”
Farther north, a cold Christmas cut into early business, but resorts rebounded and skied well into March.

Moon says every weekend except Christmas was up 15-20 percent over last year. Lessons were also way up, thanks to the introduction of terrain-based learning, only the second resort in the Midwest with the teaching model.

“After the last two years, people were getting discouraged, so it was good to see snowboarders and skiers back, passion back,” adds Amy Reents, president of the Midwest Ski Areas Association. “It was not a record breaker, but we had some record-setting days.”