This issue's trailblazers is the family of Dale Walters, founder of Mountain Wire Rope Service. 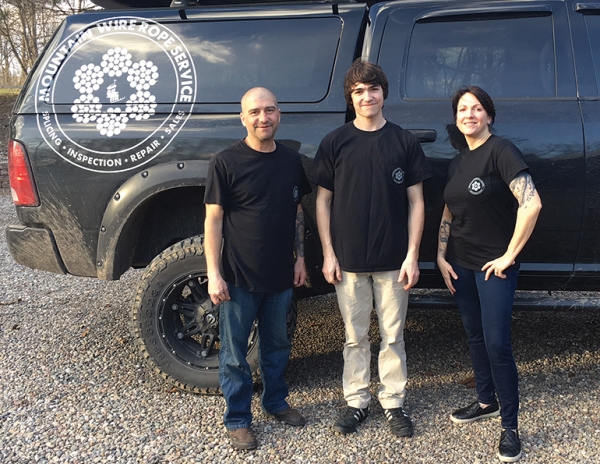 In 1984, the legendary Dale Walters founded Mountain Wire Rope Service to fill the niche of inspecting, testing, and splicing wire rope on aerial ropeways. He traveled the country for nearly three decades serving his many ski area customers, but that’s only the beginning of his contribution to the industry.

After Dale died in 2014, Jan Leonard—founder of Skytrac and one of the first to be featured here as a Trailblazer—said, “Dale was not just a rope splicer. He was an advocate of being involved in our skiing and ski lift industries, along with ANSI B77. When action was needed on any front, there was Dale, willing to help whatever cause/effort was needed ... he taught perhaps a thousand wire rope/rigging classes—probably more. How many accidents were avoided due to his instruction?”

But Dale wasn’t alone in his efforts. Mountain Wire Rope Service is truly a “family business.” After serving as Dale’s apprentices and later working alongside him, his daughter Whitney and son-in-law JT have carried on what Dale started. Not only that, their son Jake will soon officially begin his apprenticeship to be a wire rope splicer and inspector after he graduates high school this spring.

This family has ensured the safety of millions of people for more than 34 years, and that promises to continue for decades to come. That’s why they’re our May 2018 Trailblazers.

SAM: When did you know you'd be all-in on the family business?

Whitney: I grew up in this business and traveled with my dad to trade shows, but it wasn’t till I was in my 20s that I realized what an amazing business and industry it was and embarked on becoming the only woman in my field.

I think my dad was surprised that I wanted to join the family business. I was working and living in NYC at the time but I was burned out, I needed a change and my dad needed the help because the business was growing quickly. The biggest challenge was for my dad—he was used to traveling by himself, so having me along really ruffled his routine. But we quickly settled into our routine together and we had some great times on the road.

Another challenge was the acceptance of a woman into the almost all male dominated industry of lift maintenance. The oldtimers had a hard time with it, but it made me even more determined to prove myself.

SAM: What influence did your father have on your career?

Whitney: My dad was the hardest worker I knew. He was diligent, passionate, and his customers were like family to him. I couldn’t ask for a better role model. He taught me everything, and after spending so much time observing how he would operate, naturally I kind of inherited his way of doing things. The things he used to say, too.

Whitney: Well, let’s see. During an inspection, you start and stop the lift several times to take measurements throughout the rope. It’s a process, and we need to communicate when we’re ready for the operators to start and stop. Instead of saying, “Start it,” my dad always said, “Roll it” when starting. To this day, I say the same thing.

SAM: What are some of the most important lessons your father taught you?

Whitney: There are so many: Hold your head high, never give up, be early. His favorite quote on a bad day—which was usually weather related—was, “If you never had a bad day you would never know when you had a good one.” The man was full of wisdom, and he shared it freely.

SAM: What was it like to apprentice for your father?

Whitney: I know it will be a surprise to everyone, but my dad was a very patient man. It was amazing learning from him. He had so much knowledge about wire rope and lifts, and he took the time to teach us everything he could. We truly lost a legend.
But when I was apprenticing, I didn’t get any special treatment because I was his daughter. If I made a mistake, I was treated just as any employee. He would show me what was wrong and make me do it again.

I remember one time we were taking measurements on a lift that was not running. So instead of us being stationary while the lift did the moving, I had to walk the lift line to take the measurements. It was raining and 36 degrees—miserable weather. After doing it once, my dad said I didn’t get enough measurements, and he made me hike all the way back up the lift while he watched from inside the lodge with his coffee. I was treated just like everyone else.

And when I did things right? The reward was he’d trust me with more work.

SAM: Did you inherit his patience?

Whitney: Not in every aspect of my life, but when I’m training Jake the patience comes right along with it. I’m so proud to be passing on my dad’s knowledge.

SAM: So, JT, what was your background before meeting Whitney?

JT: I was into car customizing and fabrication when Whitney and I met. So, chairlifts and wire rope wasn’t exactly on my radar. But my experience working with metal was super helpful—being familiar with the way metals react to being manipulated. That definitely helped me when it came time to learn the family business from Dale.

SAM: What was it like to apprentice with Dale?

JT: He was a patient man. Very tolerant and listened and accepted new ideas and changes in our work—changes that we still use today. Considering how much experience and knowledge he had, being open to listening to suggestions from anyone with less of either was really a remarkable trait.

SAM: Can you recall a change you suggested that he listened to?

JT: I made a big change in our splicing technique that saved time and was much easier for others who were helping us on the splice. Sorry I can’t elaborate—I’d be giving my secret away. Also, a lot of the changes were paperwork related. Dale loved having a paper trail, and we had to convince him that files would be safe in the computer.

SAM: When people ask what you do for a living, what do you tell them?

JT: The simple answer is: I work on ski lifts, and then it branches out from there. We usually say we service the cables that the chairs on ski lifts hang on. I usually explain splicing as bringing the rope together to make a continuous loop. You have to keep the description very simple because it’s something people don’t even think that someone would actually do for a living.

Whitney: Of course, being your own boss is a huge benefit, regardless of the industry you work in. You have a sense of pride working in a family business that you don’t get elsewhere. We’re carrying on a dream, and there’s something very special about that.

SAM: What is your advice for Jake, who is getting ready to join the family business?

Whitney: Take time for hobbies and personal life. It’s very easy to have work on your mind 24/7. It’s something we all need to keep in mind. It’s hard to get JT to travel for fun, because all he does is travel. So, we have created a little oasis at our home. We bought a mid-century modern house in 2011 and have poured our all into it. One of the biggest projects was the creation of an outside pool and bar area that you never want to leave.

SAM: What changes in the ski industry have had the most impact on your business?

Whitney: There’s more turnover now. For a long time, we would get to know our customers and their families and have a personal relationship. Now we’re lucky to see and work with the same people year after year. We need to work a bit harder, because with turnover, ops folks go from one resort to another. If you have people coming from another area that may have used someone else [in our area of expertise], the last thing we want is to lose a longstanding customer. With all the new personnel at areas we’ve worked with for years, we find ourselves having to re-introduce who we are and what we do, almost every day. It was never like that before.

SAM: Do you think the industry has done enough to encourage the next generation of aerial ropeway experts to train for this industry?

Whitney: I think the industry is always encouraging growth and new blood, but times have changed—the work ethic has changed. Our industry has its work cut out to try to encourage new generations to embrace what people in our line of work do—and how we do it—as much as past generations.

SAM: What's your favorite part of your job?

Whitney: Traveling and working with great people. We’re on the road about 300 days a year covering about 20 states. We’re hoping to be able to expand that once Jake is trained.

SAM: Jake, when did you decide you were going to apprentice and be a part of the family business?

Jake: The day I was born, my pappy gave me a small spike with a blue bow on it in the hospital. I’ve been traveling on business trips with my family all over the country since I was eight weeks old. I grew up with it in my blood, so the decision was not hard at all.

SAM: What does the future hold for Mountain Wire Rope Service?

Jake: It’s kind of a unique situation. We provide such a niche service, having knowledge that’s passed on from one generation to the next is pretty cool. I think we’ll continue to do what my pappy always did: keep loyal to our customers, and try hard to gain new ones as well.

SAM: When you're not being a high school student, what do you do for fun?

Jake: I’m usually in the garage building cars or at the skatepark scootering.