Aspen Snowmass put a great deal of thought, and plenty of investment, into its broadly appealing summer business attractions.

Back in 2013, a team at Aspen Skiing Company set what might seem like a lofty goal: to create a dynamic summer mountain experience that not only entices guests to visit Snowmass when it’s warm, but also blends in with nature and mirrors the classic, natural backdrop of the mountain.

This summer, that seemingly lofty goal becomes reality, as the resort debuts Lost Forest: a multi-generational, multi-activity-level summer operations program that spans Snowmass Mountain, yet weaves almost seamlessly into that classic backdrop. As they like to say, Lost Forest “Isn’t hard to find—it’s just hard to see.”

As effortless as it will be to hop on the Mountain Coaster, fly on the Canopy Run zip line tour, learn to conquer the climbing wall, or simply take in the views at one of the outdoor meeting spots, creating Lost Forest was no simple task.

Lost Forest is the result of years of careful study and planning—not only for the summer program, but also for how it would impact the whole mountain year round. This involved product testing, designing and redesigning, and perhaps most important of all, the financial support of an ownership that understands the need for quality investment in the project.

“We are fortunate with our ownership group and the ability for us to invest the amount of planning dollars that we did,” says Peter Santini, director of business development for Aspen Skiing Company. “And then they let us take a big bite of the capital [budget]. We know that is a luxury that not all have, and we are so appreciative of it.”

Aspen had toyed with the notion of summer operations for years, as many resorts still are. Once the decision was made to move forward back in 2013, the work began in earnest. The first step? Get out and see what is working (or not) at other resorts.

“We spent a lot of time and energy looking at the possibilities, and what was on line at other resorts,” Santini says. Most of 2014, he recalls, was focused on viewing operations, meeting with vendors, and sussing out the best options for the program. One such research trip took him to SAM’s Summer Ops Camp.

According to Santini, the first big a-ha realization was the desired look. “We knew we had to have something that fit into our area, both from a topographical and from an experience point of view. We knew, absolutely, that this had to be on par with our winter brand,” he says.

That’s when the team realized its planning could not just focus on summer. Instead, it worked through an entire new master plan, including winter, to best understand how summer operations would fit year round.

Aspen Snowmass is a huge property, spread across four beautiful mountains. So the first major decision in planning was deciding where this new summer activity center should be built. In the end, Snowmass was the choice for two big reasons. First: pitch. Aspen Mountain proved to be a bit too steep for some of the elements the team wanted to include. And second: guest traffic.

Aspen differs somewhat from many other resort areas in the summer because, for the most part, guests are already coming to town. “We are blessed with the fact that as a community, we are as busy in the summer as we are in the winter,” Santini says. Between festivals, concerts, hiking and more, Aspen proper is hopping all summer. But Snowmass, he says, does see a drop in occupancy in the summer, so the choice became clear.

“We wanted to create a reason for people to go to Snowmass in the summer,” says Santini. “We want to capture the people that are already here and get them to go to Snowmass. We see Lost Forest as the real driver in this.”

Next up was deciding not just which elements to include, but exactly how to blend them into the backdrop of Snowmass. “Lost Forest has a very deliberate design philosophy, and that took a lot of work,” Santini says. “We had to think of winter ops. We did not want a lot of infrastructure not related to skiing to be front and center [in the winter months].”

The team also wanted Lost Forest to represent an overarching philosophy that’s embraced by the Aspen community: getting outside and into the woods is an amazing, educational, and exciting experience. Regardless of the outdoor activity, it shouldn’t look or feel artificial. It was more expensive to do, Santini admits, but “We’ve met our goals.”

How so? Take the Breathtaker Alpine Coaster, for example. Located just above the gondola-top Elk Camp “base area” (where ski school is centered in the winter), the coaster literally winds through the woods, its infrastructure almost invisible from the base or even from a ski trail near it. The coaster building is not a mere “operations shack,” either. Instead, the resort invested in hiring the same architect who designed Elk Camp—the swank lodge at the top of the gondola—so the building would blend well with its surroundings and match the resort’s other structures.

It was, of course, the more expensive option, but Santini says it was worth it and is another example of how supportive the ownership group is. “That’s not a luxury all resorts have, I know.”

The Canopy Run zip line tour and Treeline Trial Challenge Course are each matriculated into woodsy spots, again locating towers and elements where they blend into the scenery rather than stick out. 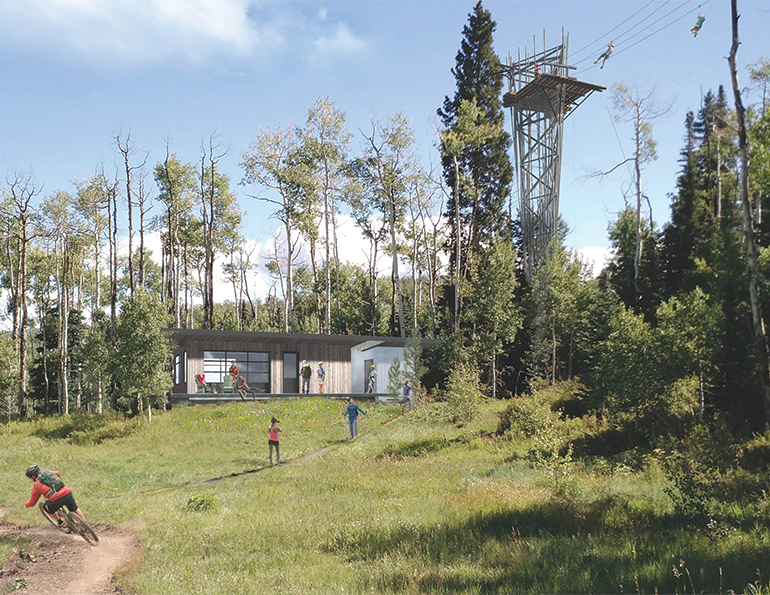 Painstaking measures were taken to ensure attractions such as the zip line tour and challenge course, as well as other infrastructure, all matriculated into the woodsy, mountainous surroundings.

Making the climbing wall as inconspicuous as the other attractions was more of a challenge, though. First, unlike the movable wall the resort had in the past, the new climbing wall was to be a permanent structure, and planners did not want it just randomly to stand out. Fortuitously, a nearby embankment allows the wall to blend well into its surroundings, and the location is tucked to a side where it’s out of the way in winter. Santini says finding a way for the wall to blend was one of the biggest challenges.

Santini admits that the resort’s previous summer offerings were fun, but not on par with the team’s vision of the Lost Forest experience. So it came time to update them.

“It was about making a change from looking like a ski area that opens for the summer to looking like a true summer business,” he says. “We realized there is way more to this than opening a chair. It’s not just ‘turn the lifts on and have at it,’ which is how we were operating before.”

Existing activities and amenities such as hiking programs, fishing, disc golf, paintball, and “gathering sites” all got some attention. Now, these long-offered elements are consistent with the expected quality of the Lost Forest brand.

It’s important to note that investment was made not just to improve infrastructure, but also maintenance and aesthetics, namely for the walking and hiking areas, as well as scenic gathering spots. The Maroon Bells gathering spot, for instance, had become somewhat trampled down and worn from guests going out there to take in the iconic view. Now, as part of Lost Forest, it is well maintained, and a place where folks will want to settle in and hang out. 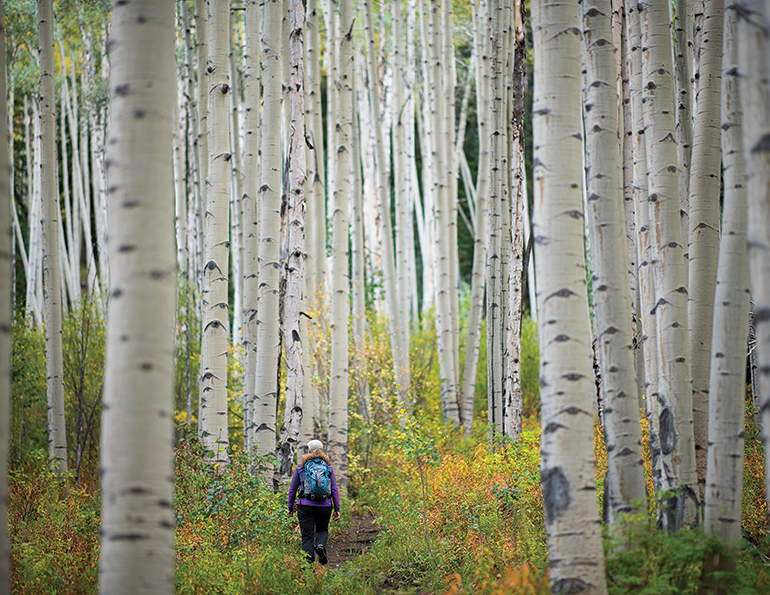 Existing activities and amenities, such as hiking programs, were upgraded to be consistent with the expected quality of the Lost Forest brand.

So now, with Lost Forest opening, marketing gets real. Santini says the team feels positive, perched to experience great success. Why? Because another big part of their plan was to choose an inclusive mix of activities that would attract all ages and abilities, without offering a watered-down experience.

The resort hopes to do that with a program that offers a menu to make anyone happy. From a short visit with some quick activities to a longer adventure (the Canopy Run is a three-hour tour), and ticket pricing that allows many options, the aim is to hold close to the brand yet show flexibility in the experience.

The coaster, Santini says, is the “linchpin activity in terms of access. It’s multi-generational, with a lower sense of adventure. And yet, it’s not just another ride.” The coaster is scenic and exciting, of course, but to amp it up even more, the resort made another big investment: lights for nighttime coaster rides.

“We have the coaster, which is a matter of minutes to do, to the Canopy, which is three hours,” Santini says, “and so many things in between. We want to cater to all different budgets—and by that I mean time and adventure budgets.”

How will it go? The marketing has just begun. But as summer 2018 begins, all that work—and investment—since setting the lofty goal back in 2013 feels like a win, says Santini. “Our goal is to bring more people to Snowmass in the summer. We are poised to do just that.”