SAM Magazine—Nashville, Tenn., May 24, 2022—The National Ski Areas Association (NSAA) held its annual national convention in person for the first time since 2019, and more than 870 ski area operators, industry suppliers, association representatives, and other mountain resort industry people came out for the event in Nashville, Tenn., May 12-15, 2022. 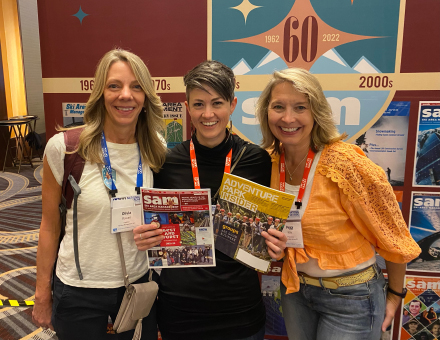 SAM publisher Olivia Rowan, with Katherine Fuller and Peggy Hiller, both from Arapahoe Basin.The attendees were treated to a full schedule of educational sessions, speakers, awards presentations, a trade show, and networking opportunities in Music City.

NSAA CEO Kelly Pawlak kicked things off at the opening general session on Friday morning with the news that ski areas in the United States welcomed a record 61 million skier visits during the 2021-22 winter season, a remarkable feat considering the inconsistent snowfall and pervasive staffing challenges operators dealt with from coast to coast.

The Friday morning general session also saw the 2020 NSAA Lifetime Achievement Award honorees—Peak Resorts founder Tim Boyd and former Snow Time Inc., VP and COO Eric Flynn—properly feted in front of their peers. Each credited their teams and others in the industry for much of their success. “It’s great players that make coaches look good,” said Boyd.

The general session on Friday afternoon featured the presentation of the 2021 Lifetime Achievement Awards to industry luminary Bill Jensen and longtime Sun Valley, Idaho, president and GM Tim Silva. Both also thanked the thousands of people they’d worked with throughout their careers. Jensen, in addition, credited SAM founder David Rowan and former SKI publisher John Fry as having had a strong philosophical influence on him. “This business is all about people,” said Jensen. 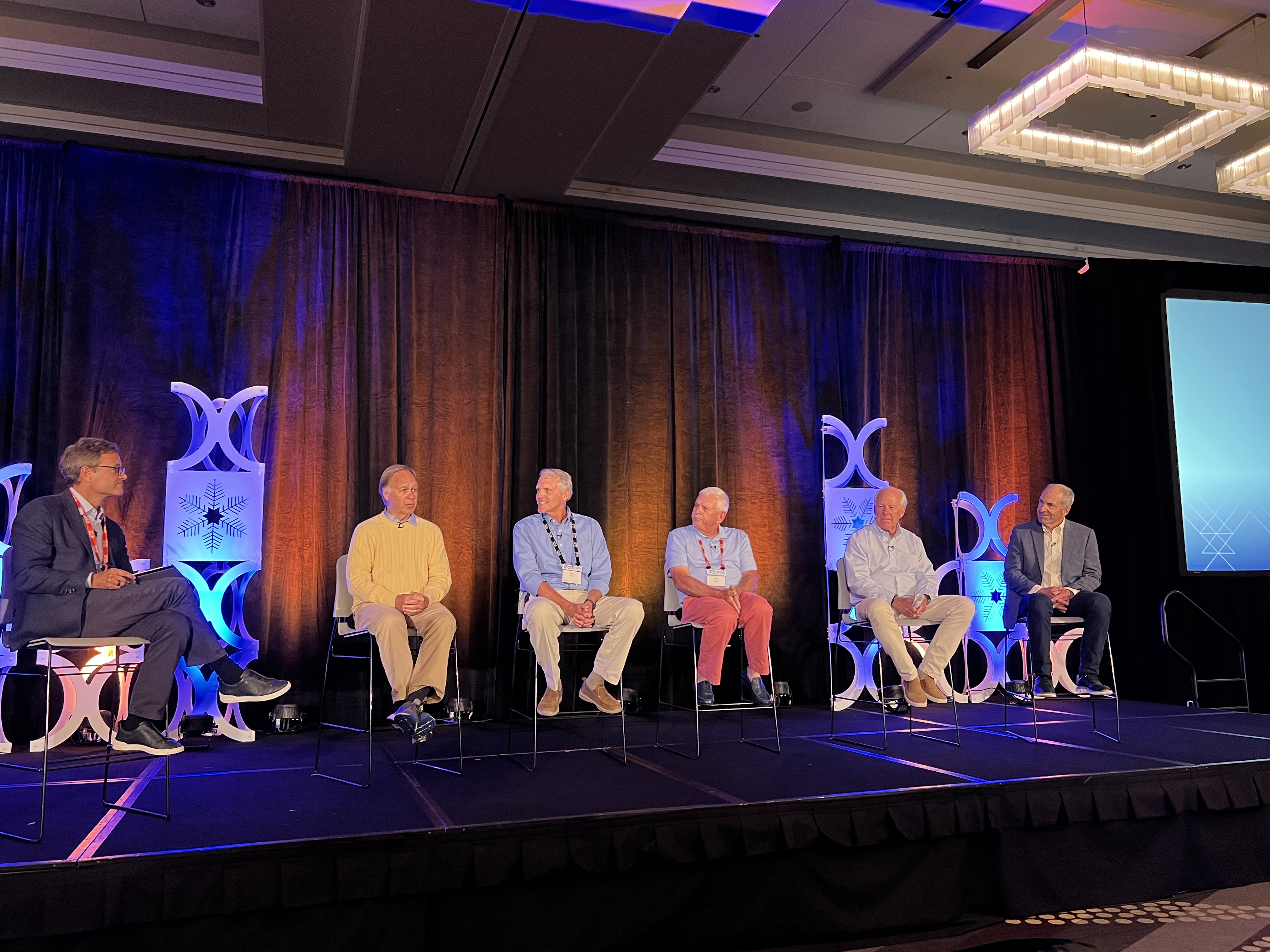 Jensen, Silva, Boyd, and Flynn were joined by 2022 Lifetime Achievement Award honoree Win Smith on stage for a panel called “A Lifetime of Leadership” moderated by Boyne Resorts CEO Stephen Kircher. Among the points of discussion was the current economic landscape and how growing inflation compares to the stagflation days of the 1970s and ‘80s. Boyd, in particular, speculated that things are going to get worse and cautioned the audience to hang on tight for a rough road ahead.

The highly-anticipated final general session on Saturday kicked off with Vail Resorts CEO Kirsten Lynch introducing her predecessor Rob Katz for the NSAA Industry Impact Award. “He made us better human beings. … world class is not for the faint of heart,” said Lynch.

Katz started out with humor after he took the podium, joking that he left Lynch in a great position for a perfect season (she took over in November 2021). He also addressed the elephant in the room: The well-documented issues of crowding at Vail Resorts properties and the discounted Epic Pass. 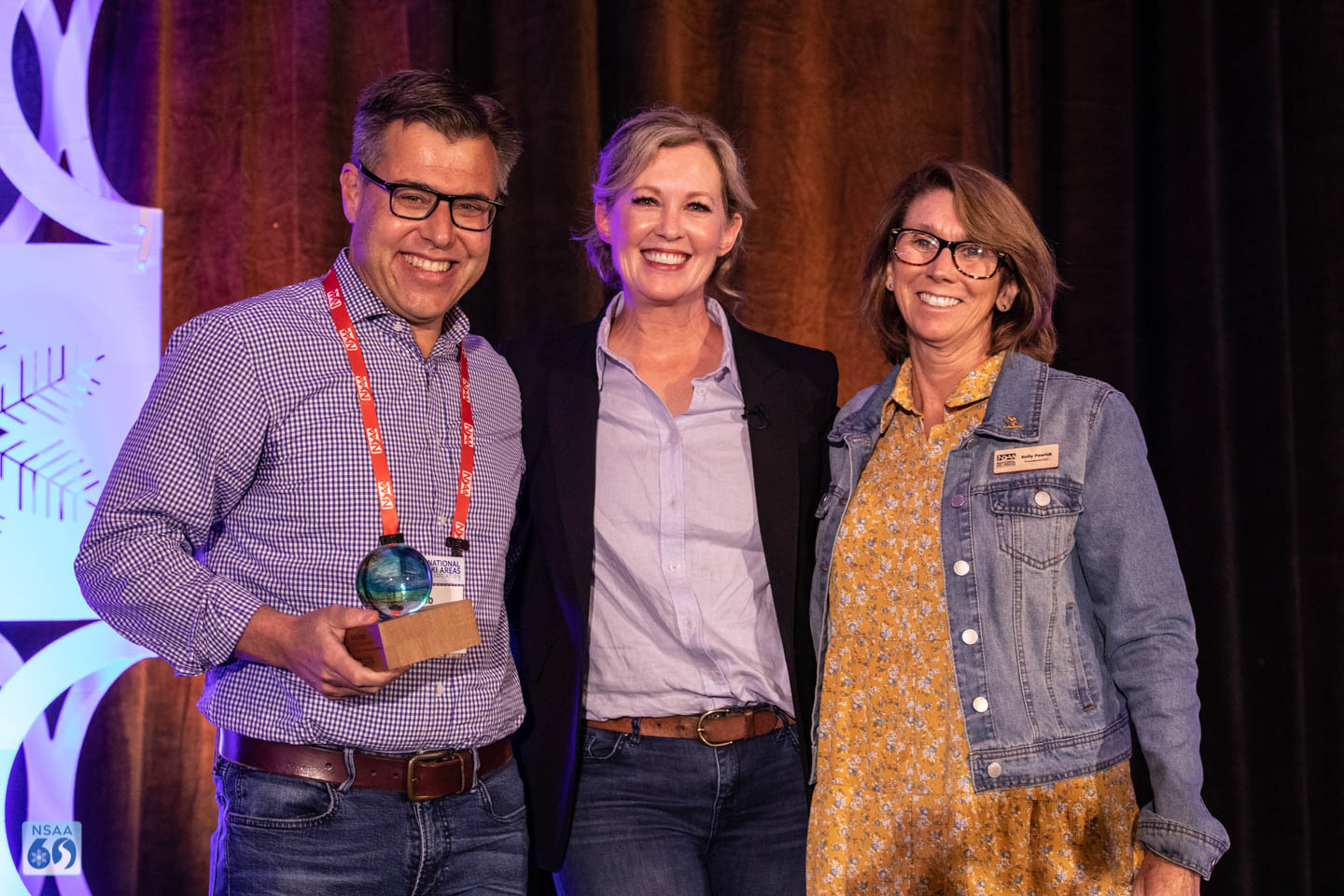 Rob Katz and Kirsten Lynch, Vail Resorts, and Kelly Pawlak, NSAA.*“There was no bigger story over the last year than, ‘we’re growing too much; there are too many people on the mountain; that pass is too cheap.’ C’mon,” he said, “let’s not fool ourselves into thinking that bringing new people into the sport is a bad thing.”

(Some shared with SAM after the presentation that the growth in sales of an inexpensive season pass product does not necessarily correlate to growth in new participants, who are seemingly less likely to invest in a pre-season purchase than core or even casual participants. Another comment shared with editors of SAM was that the images of overcrowding did not serve the industry well in attracting new or lapsed participants.)

Following Katz’s acceptance, 2022 Lifetime Achievement Award honoree Win Smith was eloquently introduced by his 12-year-old granddaughter, Madyn Disabato. Smith then spoke about how his ownership of Sugarbush, Vt., came to be, about leadership, and his decision to sell Sugarbush to Alterra Mountain Company in 2019. He said he feels optimistic about the future but that “one of our biggest threats is complacency,” as well as climate, and he implored the audience to advocate for climate reform. 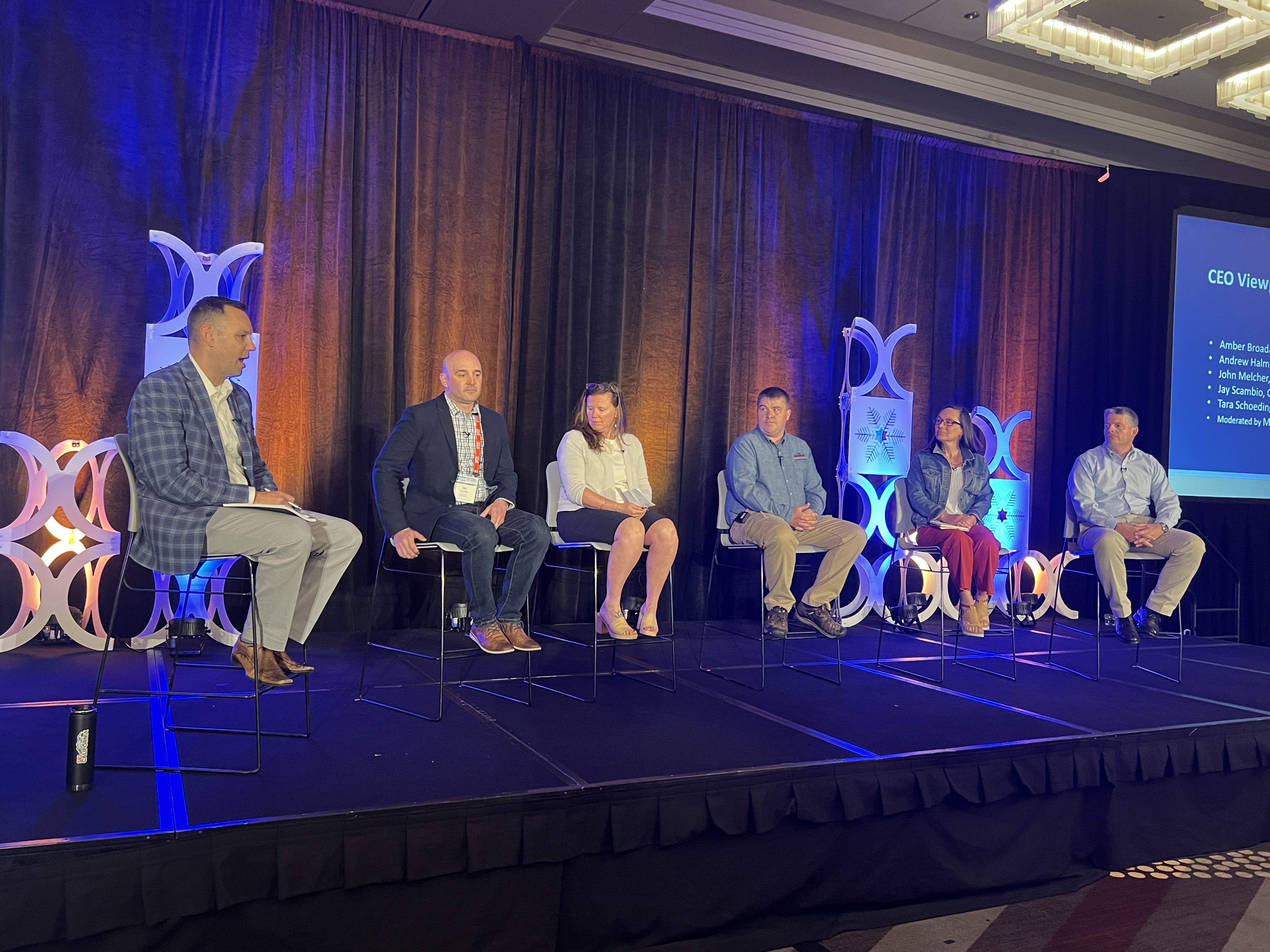 A CEO panel followed, moderated by Ski California president Michael Reitzell, which included: Amber Broadaway, Solitude, Utah; Andrew Halmi, Mount Pleasant of Edinboro, Pa.; John Melcher, Crystal Mountain, Mich.; Jay Scambio, Boyne Resorts; and Tara Schoedinger, Crested Butte, Colo. The panelists are all relatively new to their positions, and discussed a lot of new-school topics such as the ski industry’s traditional six- or seven-day workweeks during the winter, which Broadaway called “archaic.” She’s exploring a four-day workweek at Solitude—a model that has been successful in other industries.

As always, breakout sessions covered a variety of topics from technology and marketing to risk management, climate change, guest capacity, and more.

On the technology front, a panel that included Snow Partners CEO Joe Hession, Blue Mountain, Pa., president Barb Green, and Perfect North Slopes, Ind., GM Jonathan Davis, and was moderated by InTouch Elevate’s Casey Parliament, shared approaches to tech adoption at the respective operations. The adoption of live chat to communicate with guests, the importance of examining your processes—and engaging with staff—to inform tech decisions, and not drowning in data were among the topics discussed. 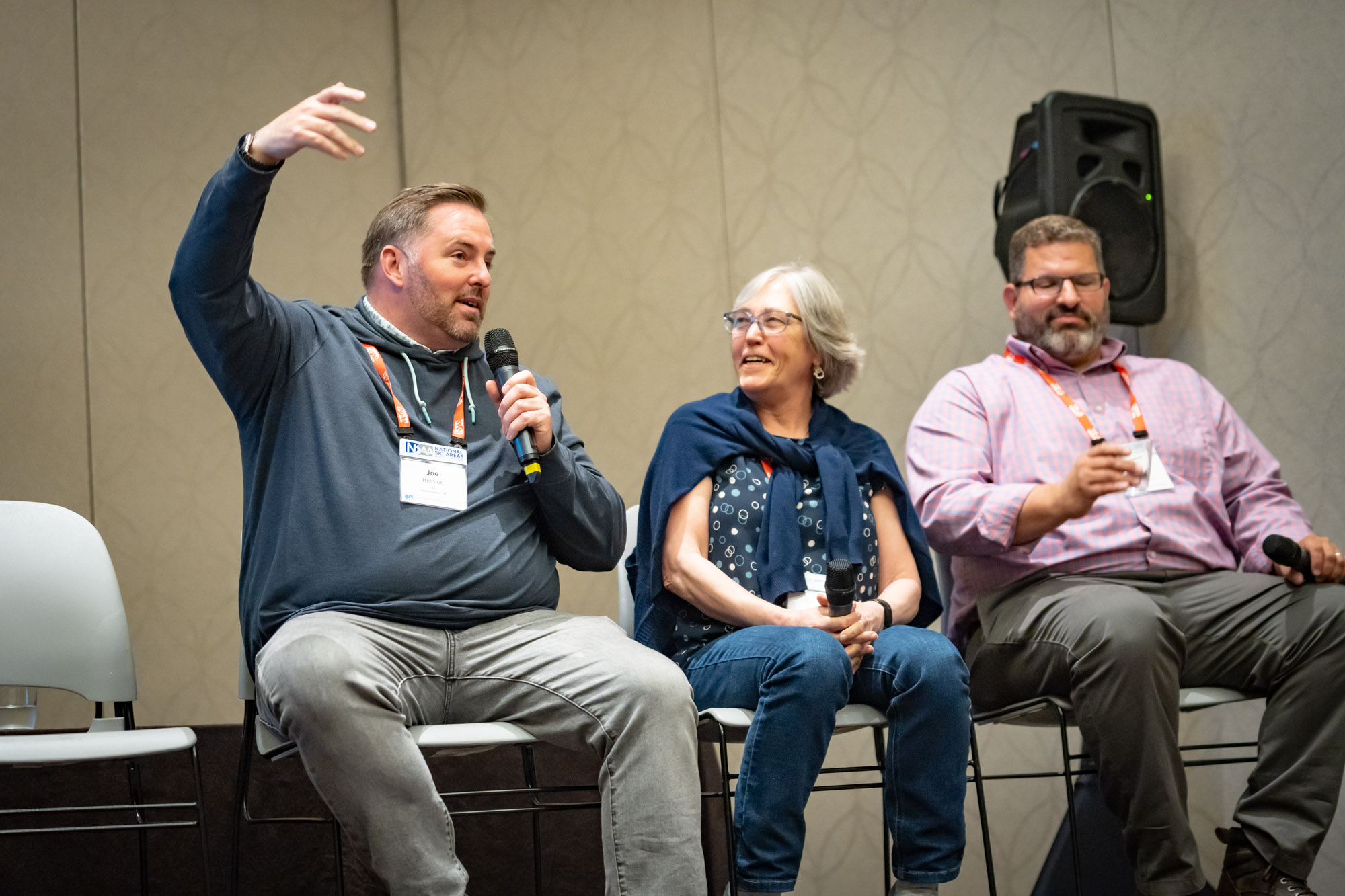 In an example of a traditional mode of marketing communications that may be making a comeback, in the “Data Driven Marketing” session, Alterra Mountain Company director of CRM marketing Molly Holmes touted the value of direct mail as a means of effectively reaching guests.

Capacity management was another hot topic in conversations around the halls and in sessions throughout the show. The session titled “Space Isn’t the Problem: Modern Tools and Solutions for Managing Capacity”—presented by Claire Humber and Kent Sharp from SE Group, Brad Wilson of Bogus Basin, Idaho, Alan Henceroth of Arapahoe Basin, Colo., and Greg Pack of Mt. Hood Meadows, Ore.—dug into the topic. 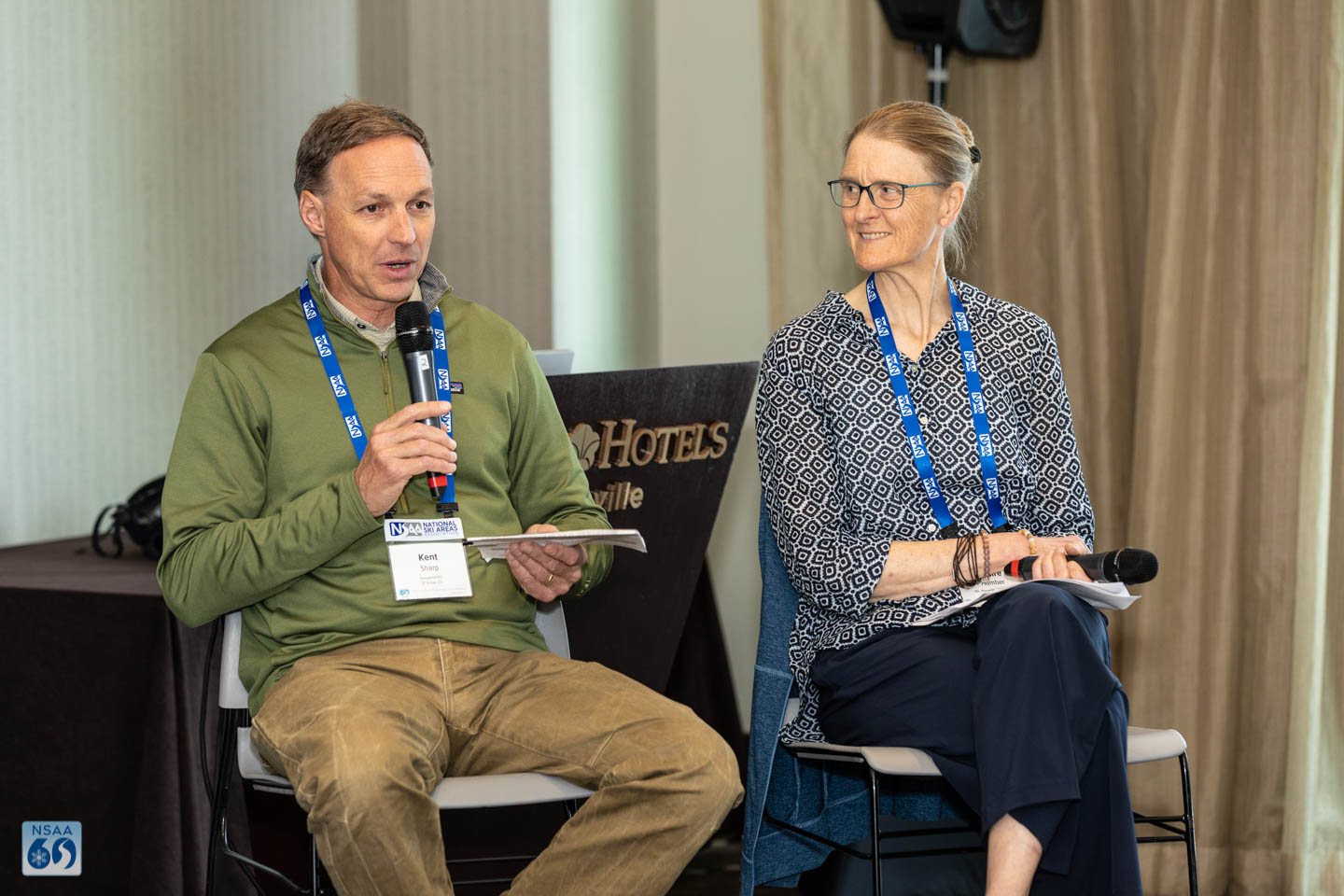 The main message shared by the presenters is that data is key to understanding how well our models are working. Each resort leader on the panel shared that they turned people away this winter and are all faced with the question: how do we grow but preserve the guest experience? Honest communication during peak days was key in managing guest expectations, they said. In addition, panelists said they’re adding more beginner terrain and reintroducing more value products to support growth after cutting many out during the last two years.

The conversation turned to how we measure our success and where and how to grow. It was suggested that skier visits should not be the only metric we use to measure growth; total skier population along with tracking NPS scores were other data points the panelists said could be useful in measuring growth.

Some questions remain. Are fewer visits and higher revenue the holy grail? SAM asked if anyone was tracking how many beginners or lapsed skiers/riders were buying passes or tickets in the last two years. Though none had this data handy, this might be the kind of data we need to manage capacity while still growing.

The existential threat of climate change was a prevalent topic throughout the convention, with sessions covering how to reduce wildfire risk, upping our climate advocacy, and a discussion with U.S. Forest Service deputy chief Chris French about the challenges the agency is facing and how additional resources and collaboration with the ski industry will help improve the agency’s effectiveness.

A trade show reception on Friday and a trade show lunch on Saturday provided a venue for the conference’s 375 suppliers and networking opportunities for nearly 500 resort personnel. 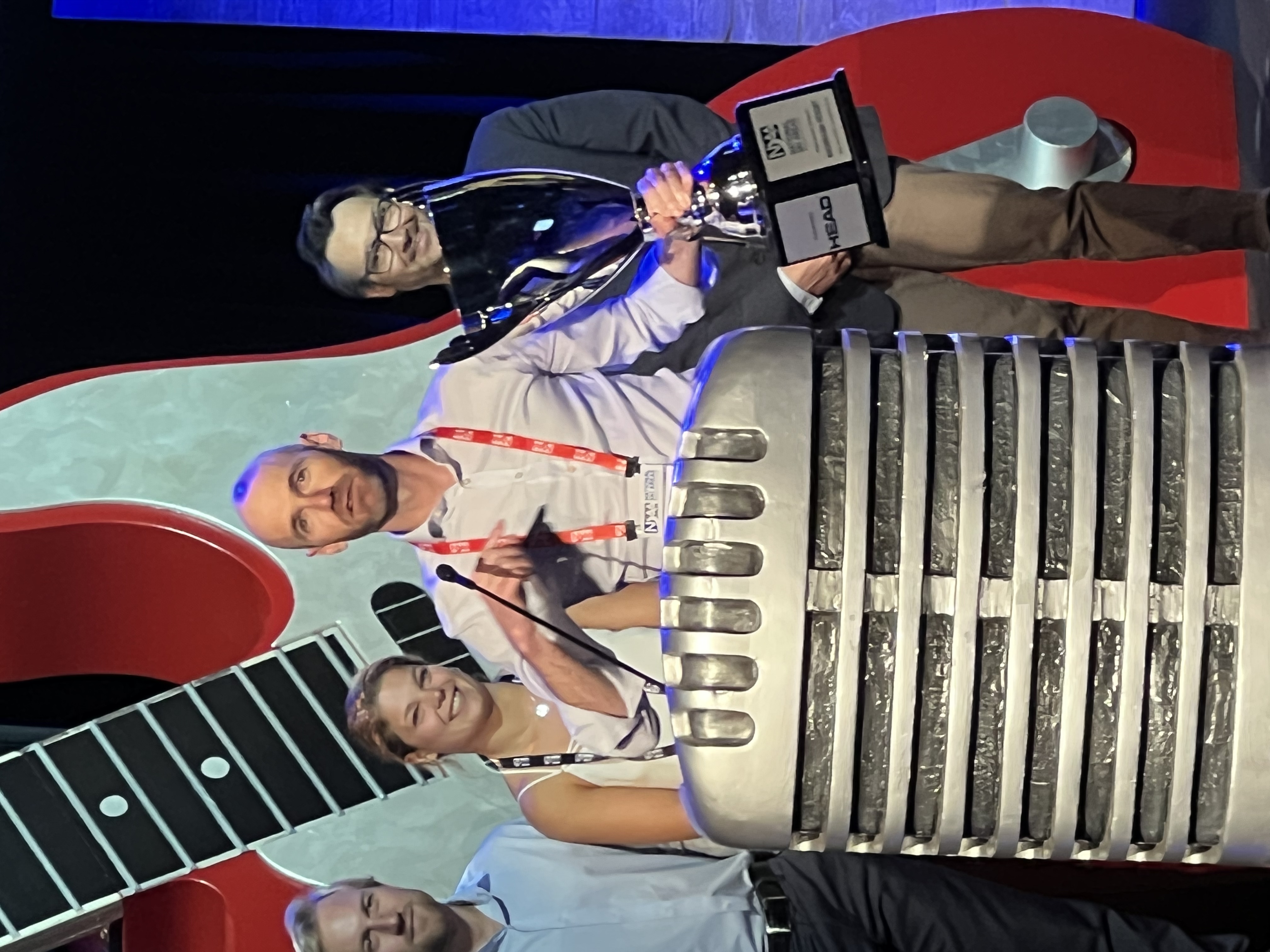 The ongoing pandemic continues to present challenges for large-scale events. According to NSAA, several attendees reported positive Covid tests in the days during and after the convention. In response, NSAA said it will continue to follow the science and adhere to local regulations at all of its event locations, and will maintain its flexible cancellation policy for attendees.

Overall, attendees were excited to gather in person once more, with many resorts bringing large contingents to the show, not just senior-most leadership. This was great to see as the national convention and other events like it offer invaluable educational and networking opportunities that resort team members of all levels can benefit from. The wide demographic of attendees was reflected in a new Next Generation of Leaders event, and the social events, which featured ample delectable fried Nashville specialties. All were well attended.