SAM Magazine—Natick, Mass., Nov. 4, 2022—North American ski areas are starting to open for the season after a second autumn snowstorm pummeled the West this week, with more snow expected over the weekend and early next week. 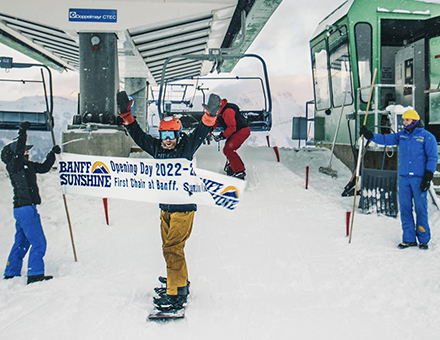 Opening Day at Banff Sunshine The new snow allowed Banff Sunshine in Alberta to be the first resort in Canada to open when it kicked-off the season on Thursday, Nov. 3, about a week earlier than planned.

The early season so far is a tale of two climates, with the western portion of North America enjoying an active pattern of cold and snow while ski areas in the eastern half of the country endure a prolonged warm spell that’s expected to last through mid-November.

Dubbed “Snow-vember” by some in the West, this week’s storm delivered up to 18 inches of snow to parts of northern Idaho, Montana, the Pacific Northwest, and California’s High Sierra before moving to Utah, Colorado, New Mexico, and Arizona. Last week, a 36-hour system dropped more than two feet of snow on some areas of the northern Rockies and the Wasatch. And starting today, a series of storms are forecast to drop heavy snow from western Canada down to California and across the Rockies through the middle of next week.

In stark contrast, areas of the Midwest are experiencing record-high temps, with Minnesota running about 25 degrees warmer than average. It’s a far cry from two weeks ago, when a pair of Minnesota ski areas became the first to open on Oct. 18, with Wild Mountain edging out Andes Tower Hills by a mere hour. Wild opened with two rope tows, two trails, and about six park features. About 300 people showed up for the area’s second-earliest opening.

Wild Mountain stayed open through Oct. 22, when temperatures spiked into the 70s. It plans to reopen ASAP. “We see some cold weather on the horizon, so we hope to be open again in the next few weeks,” said president Sara Larsen.

Andes Tower Hills chose to open for only one day, mainly so staff could get back to early-season prepping but saw a “fair” turnout for a mid-day, mid-week opening, said the resort’s Tom Anderson, who noted a surprising 60/40 snowboarder-to-skier ratio vs. its typical 90-percent-snowboarder crowd. The ski area’s earliest-ever opening was commemorated on specially printed lift tickets for customers to keep as a novelty item.

In Wisconsin, Trollhaugen opened third on Oct. 19, with the first chair-served skiing and riding. Marketing director Marsha Hovey said opening day—its earliest ever, by four days—drew local diehards and enthusiasts from around the Midwest for one chair, a rope tow, one run and nine park features.

In the West, Arapahoe Basin opened Oct. 23, prior to all the snow, with one lift and one run, becoming the first to open in Colorado for the tenth time in 12 years and the first to open for daily skiing and riding in North America. Opening-day turnout was up slightly from last year, said senior communications manager Katherine Fuller, with folks in line for both the lift and the venerable mug club by 5:30 a.m., some of whom had waited overnight for first chair. Staff handed out free donuts and A-Basin-branded duct tape to the first 50 people in line, and a live band performed.

Others in Colorado that benefitted from October’s “base building week” and cold temps include Keystone, which welcomed skiers and riders on Oct. 28. Winter Park opened on Halloween, with three lifts, a terrain park, and costume party to celebrate its earliest-ever opening. The three locals who snagged first chair arrived at 4 a.m., said resort spokesperson Jen Miller. Loveland opened Nov. 3 for its 85th season. And Wolf Creek opens today, Nov. 4, after reporting more than two feet of snow this week.

Brian Head also opens today, the first in Utah, and the earliest opening in the resort’s history thanks to a few shots of early-season snow—including a reported 15 inches over the past couple of days—and good snowmaking conditions. It plans to have three trails served by three lifts with first chair at 10 a.m.

In California, where 92 percent of the state has been in “severe drought,” Mammoth looks to be the first in the state to open for the season, with plans to send its first chair up at 8:30 a.m., Saturday, Nov. 5. The resort expects to have two or three lifts serving two or three runs and a small terrain park. Next up in California, Boreal plans to open Nov. 18—bumped from a hopeful Oct. 28—as do Snow Summit, Heavenly, and Northstar.

Most Pacific Northwest areas are shooting for Thanksgiving(ish) openings, said PNSAA president Jordan Elliott. “We would be very happy to see snow accumulation start to add up before then for some early-season turns,” said Elliott, noting the three inches on the ground at the association’s Bend, Ore., headquarters in early November.

Mt. Baker, Wash., noted in its Nov. 1 snow report that it would consider an early opening if snow cooperated and staff was ready. “We open as soon as we have our crew trained, the necessary snowfall accumulation…and a favorable forecast,” it said. Surely, other ski areas are balancing early-season snow with staff shuffling and prep work—Andes Tower Hills was in October, for one—a good reminder that even if a ski area has a ton of early snow, staff need to be trained and ready to go before it can open.

To the north in Canada, Alberta resorts are leading the way. Banff Sunshine’s early opening yesterday came amid falling snow piling up on the more than four feet the resort has recorded so far.

“This is the earliest opening day in my lifetime,” said Banff Sunshine brand and communications manager Kendra Scurfield. “As we were watching Snowmageddon roll in and the snow continue to pile up, we decided that it would be possible to open a week early and get our snow cats out on the mountain to open Strawberry Chair.”

Nearby Lake Louise will open today with one lift serving three runs, including a terrain park with eight features.

Fellow Alberta resorts Norquay and Nakiska are close behind, aiming for Nov. 5, weather permitting. Avery Price of Banff Sunshine/Norquay/Lake Louise’s SkiBig3 says top-mountain elevation temperatures through Monday are expected to drop as low as -22°C (about -7°F), which will allow for good snowmaking production combined with steady precipitation.

This brings us to the East, which is experiencing record high temps after a few sporadic cold days in October allowed for some snowmaking, but not much. The warm spell is expected to continue for the next week or so. Still, the planned opening days for Mount Snow, Vt. (Nov. 11), Stowe, Vt., Wildcat Mountain, N.H., Hunter Mountain, N.Y., and Gore Mountain, N.Y. (11/18)—the earliest of the planned openings posted to snocountry.com—remain unchanged as of today.

Despite the warm temps, Killington Resort, Vt., remains optimistic about its plans to host the women’s World Cup race, Nov. 25-27. The resort was able to make snow on Superstar, the trail on which the race is held, in October, and is waiting for the next window of cold to fire back up. Making the best of the mild weather, Killington is reopening its bike park for one last “bonus weekend” of lift-served downhill mountain biking this weekend.

La Nina is back for the third year in a row, and with it, predictions of wetter than average conditions for areas of the northern Rockies and Pacific Northwest, and continued drought in the West and Southeast. Only time will tell, but until then we’ll be monitoring resort openings and hopefully watching it snow.