The Angles and Potential Behind Vail’s Epic for Everyone Pivot

Am I safe to call this a pivot? I think so.

For the last decade Vail has pushing a simple, rinse-and-repeat marketing concept with crazy results. In an over-simplified list, it goes like this:

2. Raise window rates higher than anyone in the country

3. Use the media coverage of those rates to sell the pass product

In other words, the gap between the window rate and the pass product wasn’t accidental. It was the point.

But now, they’ve got a new product to push. Those words are Rob Katz’, quoted in the Denver Post this week talking about new Epic for Everyone product.

“Any of the resorts, if you walk up to the window in the middle of the season, they’re going to pay a lot of money. Now you have a product that starts as low as $106 that you can buy before the season.”

For a company that has turned every pricepoint and product into something that can drive and support season pass sales, I think pivot is the right word. A few thoughts. 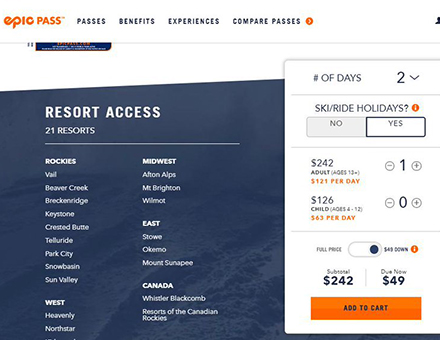 Which means, second, that they now have one more reason to keep their window rates the highest in the nation. Anyone want to place some bets on how soon we’ll see $250/day?

Third, there is also a hidden lesson in anchoring in here. When the Epic Pass launched more than a decade ago, the window rate at Vail was almost exactly $100. But raise that high enough and suddenly $125 is “an incredible deal.”

But, fourth, this is actually a really clever move and product. For a while resorts have been wrestling with the right application of advanced purchase to bridge the gap between day-tickets and season passes. There are countless ____-packs, but those often feel a bit siloed. In this case, they’re simply asking:

“Don’t want a season pass? No problem. How many days would you like to ski this year?

And if their selection is less than 7, they load that number of days onto their pass. Interestingly, if it’s more than 7, they realize just like that how good of a deal an unlimited pass for $250 more actually is.

As Dave Amirault put it, “The financial gymnastics behind this is wild.”

We can guess all we want about the exact chess pieces they’re playing, but the bottom line is even they aren’t 100% sure what the migration patterns will look like between 2018/19 products and this year’s pivots.

But however it plays out, this product is by far the most intriguing move I’ve seen in a while.