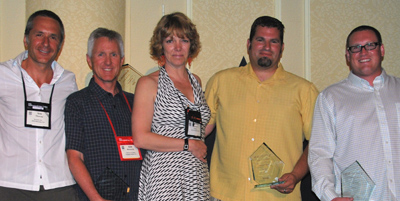 Jesse brings years of experience with him as a result of growing up and working in the ski industry. In 2003, Jesse and his wife, Jessica, were involved in the construction and operation of Crotched Mountain in New Hampshire. After the inaugural season of Crotched, the Boyds moved to St. Louis, where Jesse was named general manager of Hidden Valley Ski Area. In 2005, Jesse moved to the Poconos and became general manager of Jack Frost and Big Boulder Resorts. Now as a VP in Peak Resorts, he is overseeing operations at six resorts and spearheading the freestyle terrain front with the evolution of Big Boulder PARK, Carinthia at Mount Snow and the creation of Peak's own BAP (Build A Park) program for Peak employees. His true vision has been to integrate the park scene at all eleven Peak Resorts.

For the past two summer seasons, Jesse has also been in charge of two major snowmaking installations for Peak Resorts, the first at Attitash in 2007, and the second at Mount Snow in 2008. He and his team of six Peak Resorts employees, including his brothers Josh and Jason, have installed 275 SMI PoleCats between the two areas.

Known as someone who gets in the trenches to get it done, nominators say, “Jesse works hard and has earned the respect of all employees who encounter him.” Another nominator adds, “Jesse's hard work, dedication and love for the industry merit consideration as a candidate for this year's SAMMY awards.”

Jonathan grew up literally across the valley from Perfect North Slopes. After graduating high school at 16 in 1992, Jonathan continued to study chemistry and computer science while working seasonally at Perfect North Slopes as a lift attendant for three seasons. In the fall of 1995, Jonathan was asked to migrate inside to fill a position supervising the rental shop for the late-night ski sessions—sessions that lasted until 4 a.m. back then. Eventually he became the rental shop manager.

Starting in 1999, Jonathan shifted responsibilities to managing the area's network, point-of-sale, and all-things-IT, mainly because, as he put it, “I was (am) regarded as the the one-eyed man in the land of the blind.” As one of three key directors at Perfect North Slopes, Jonathan continues to look for opportunities to maximize business efficiencies, foster a fun environment, and pursue ideas that are beneficial to his area, as well as the ski industry at large.

When it came to his nomination, all who wrote in describe Jonathan as not only competent, but compassionate about this industry. “Jon will lead this industry not only with his expertise, but with his passion and compassion. Jon cares about others more than anyone I know. Knowledgable difference makers who care about the sport, the industry, and others are what the SAMMYs are about.”

Alan Henceroth completed his college degree in Forest Management from Northern Arizona University and, upon graduation, moved to Summit County, Colorado, for “one” winter of skiing. After spending five years at Keystone, he moved up the road to Arapahoe Basin where he has worked since 1988.

There, he quickly went from ski patrol director to director of mountain operations, and most recently, vice president and COO. For the last eight years, Alan has been in the center of Arapahoe Basin's capital expansion, including design, approval, installation and implementation of new snowmaking, a winter sport center, the Black Mount Lodge and a 400-acre terrain expansion.

His job keeps him actively involved with the National Ski Areas Association, Colorado Ski Country USA, The Summit Foundation, and the Colorado Passenger Tramway Safety Board. Alan enjoys skiing and floating rivers, whenever he gets a chance, with his wife, Kay, and kids, Justin and Whitney.

On the job, his nominators point to Alan's poise as a leader as his biggest attribute: “His leadership qualities are exceptional, providing clear direction while emphasizing teamwork in order to supply our customers with a great experience.” Summing it up, “Alan is highly respected by his peers and is an excellent steward for our industry. “

Arn Menconi grew up in Chicago and moved to Vail, Colorado, at the age of 33. He began teaching snowboarding lessons at Vail Mountain in 1991 and saw a need for the sport to reach out to those who would not otherwise have an opportunity to visit the mountains. In 1993, Arn founded the nonprofit SOS Outreach program in Vail Valley. Its original name was the Snowboard Outreach Society. Arn has also served two terms as Eagle County Commissioner from 2002 to 2008, where he fought for social justice and environmental causes.

As a nonprofit organization, the goal of SOS is building character and self-esteem in youth through outdoor activities and the SOS curriculum. The program teaches more than 3,600 kids each year at 36 ski resorts in the U.S. To help out, SOS Outreach averages 500 adult volunteers each season. The program's growth has seen a 16-percent increase from last season and 170-percent growth from 2006-07.

“The hills are 95 percent white, while the Millennial Generation is 50 percent minority,” says Menconi. “When we go into the schools, it's a Bennetton world. They don't see that in the resorts.”

One of his nominators said, “Arn has done a tremendous amount to encourage diversity and broad-based participation by youth in snowsports.”