The ski industry has been blessed with outstanding leadership over the years and every year many of those leaders are appropriately recognized with Lifetime Achievement Awards, election to the Hall of Fame and other such honorifics. SAM applauds them.

The new SAMMY Future Leadership Awards will be awarded on an annual basis to individuals whose strong, innovative leadership demonstrated at mid-career shows exciting promise for even more accomplishments and leadership in the future.

Nominations for the SAMMY Awards have come from active members of the North American snowsports industry and those being honored can be proud of the peer recognition. 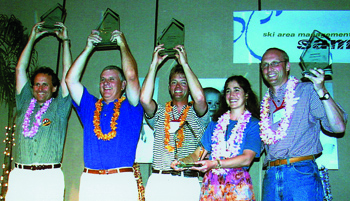 Ed's amazing career in the mountain resort field illustrates what can happen if a good editor/writer undergoes an identity crisis and chooses up-to-the-armpits involvement over detachment and observation.

The Massachusetts native spent nine years with Times Mirror Magazines, where he held both top editorial and advertising positions with Ski Magazine -- specifically, editor-in-chief and advertising director. During this period he gained national recognition as a gifted and provocative presenter at industry conferences.

In 1996 he jumped over the wall and joined Intrawest with a title that was as singular as was his career: Staff VP, Idea and Product Acceleration. In that position, Ed was responsible for working with all of Intrawest's resorts in the conception, development and implementation of new strategies, products, programs and services -- responsibilities which he retains with his new title. Ed's career is sure to be a fascinating one to watch over time. But don't blink: Ed moves fast.

Guy claims that, as a student at the Universite de Montreal, he spent as much time as a ski bum on the slopes as he did in the classroom. Which probably explains why he is so bright.

His ski career started at Parc du Mont-Comi, where he logged four years as GM. He moved to Mont-Sainte-Anne, one of Canada's signature resorts and a Québec City showcase, and after just four years became GM at the age of 34. Guy's leadership abilities were quickly recognized by his peers. He has invested much energy and time with the Québec Ski Areas Association, serving in many capacities, including secretary and president of the board. As a national leader, he served as 1st VP of the Canadian Ski Council and in 1997 moved up to the presidency.

Leadership of this outstanding quality is what the Sammy Awards are about.

Karl is a ski industry brat, having grown up at Ascutney Mountain in Vermont, where he started working for the ski area at the age of 13. He learned mountain operations from the ground up during his high school and college years and, less than a year out of college, was named Ascutney's mountain manager. The next chapter in Karl's success story was written in his five-year stint as manager of Hunt Hollow in New York. Then, the West beckoned and he immersed himself in the southern California market as GM of Mountain High. The Midwest came next, where he was executive director of the Duluth-owned Spirit Mountain in Minnesota and where his innovative marketing produced two record years. Then it was back to Mountain High where his programs -- with a little help from El Nino -- resulted this past season in an increase of over 40 percent to about 425,000 skier/rider visits.

A native of Ohio, Stacy got her priorities right while a student at the University of Colorado at Boulder: she contracted the ski bug. From then on there was no stopping her.

Whether slinging hash at Vail's Eaglesnest cafeteria or doing video editing for a Vail production company, her work was tied to the mountain resort scene. Stacy's rap sheet includes p.r. services at the Vail Valley Foundation and for Vail Resort Association. In February 1993, Stacy became one of the first employees of the newly-revived NSAA, signing on as director of communications and serving as a spokesperson for NSAA and as editor of the association's publication, Member Update. She also manages NSAA's Gold Pass program, which raises more than $850,000 for the U.S. Ski/Snowboard teams each year. Stacy received much well-merited praise this past season for her role in handling media relations following the deaths of Michael Kennedy and Sonny Bono. It was her leadership that had earlier generated not only the crisis management plan that went smoothly into play, but also the factual data on skiing and snowboarding that was available for the industry and the media.

Tim is cast in the classic mold of the ski area entrepreneurs from the past -- the bold, innovative pioneers who built the industry with passion and conviction. Though this will sound strange, Tim started his ski career with a nine-hole golf course in the St. Louis, Mo., metro area. He had worked there while attending college and, after buying it, expanded it to an 18-hole private club, daringly adding skiing to the mix. Extensive tower-mounted snowmaking makes it possible to ski and play golf most of the winter long.

Next, Tim scouted the Kansas City region for a ski area site, finally settling on a location along the bluffs of the Missouri River Valley. He named it Snow Creek and persuaded his friend, Dave Grenier, to come and operate it. Then, in 1997, Tim formed a holding company and bought Paoli Peaks ski area in Indiana, making the third leg of a southern metro ski presence.

One of the foundations of his success has been his focus on introducing thousands of local youngsters to the sport. Tim's leadership as chairman of the Midwest Ski Areas Association for the past four years has been dynamic and effective. Hint: Look for dramatic new initiatives from Tim in the near future.