With the most new lift installations since 2006, it was a big year for fixed grips, as our annual lift survey reveals. 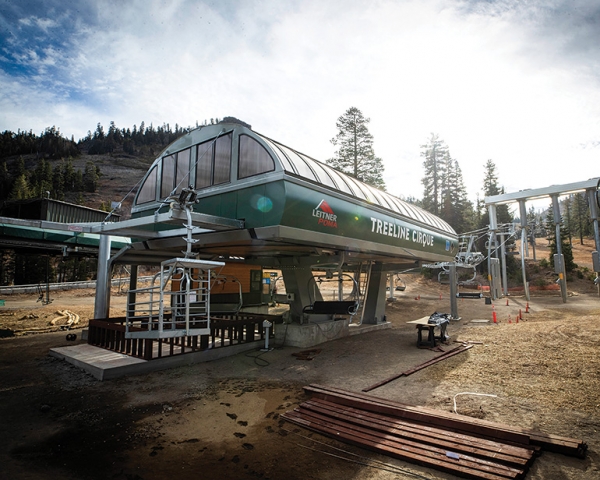 Growth came mostly from the Rockies and Pacific regions, while Midwest areas installed no new lifts.

Colorado accounted for the largest share, with six new installations plus a conveyor and major modernization of the Steamboat Gondola with new cabins, towers, controls, and brakes. “We took a 33-year-old lift and upgraded it over two phases,” says Mark Bee, president at Doppelmayr USA. “This year it achieves its ultimate capacity of 3,600 an hour with new level walk-in cabins—a tremendous improvement for Steamboat’s out-of-base capacity.” Idaho surprised with five new chairlifts, the most in that state in a dozen years, and a quarter of all the new VTFH on the continent this year.

In the East, New York led the pack with new chairlifts at Belleayre, the Lake Placid Olympic Ski Jumping Complex, and West Mountain. An impressive transformation at West is now complete, where every lift has been replaced over the last five years.

In Canada, Quebec resorts installed four new lifts ranging from a lengthy surface lift at Mont St. Mathieu to the first heated six-place detachable in Canada at Sommet Saint-Sauveur. A further three lifts each were installed in the ski-centric provinces of British Columbia and Ontario. Two of the three new six-place chairlifts built in North America this year were in Canada.

Back to Basics
While 2018 saw transformative gondolas, multiple bubble chairlifts, and innovative direct drives, the story of 2019 was mostly of simpler solutions, such as fixed-grip quads replacing aging triples and doubles. Two-thirds of the chairlifts built this year were of the slower variety, a sign that many resorts were upgrading older lift infrastructure.

“I think the market has finally gotten to a point with these aging fixed grips,” says Carl Skylling of Skytrac, which replaced three Riblet lifts this year. “We thought 20 years ago we were going to see a big surge of fixed grips being replaced. I think it’s happening now.”

Of Doppelmayr’s 23 projects, a dozen were fixed grip quads or triples. “It was a year where a lot of fixed grip lifts popped up,” says Bee. “We’re not looking at anywhere near that quantity for next year, but those projects tend to come out later.” What may seem like smaller projects still add up to a big business for manufacturers, and major outlays for the businesses that make them.

In fact, Doppelmayr’s 23 installations were the most since 2008. In 2019, Doppelmayr installed four times as many lifts as in 2014, the low point of the past 50 years, when the after-effects of the Great Recession were still impacting the ski industry.

A Few Big Projects
One of the most ambitious developments of the year was an innovative detachable quad at Squaw Valley Alpine Meadows, dubbed Treeline Cirque. Leitner-Poma engineered a double-grooved bullwheel to transfer torque between two sections at an angle station. “The way we did the mid station and the angle was really unique,” says Jon Mauch, senior sales manager at the Grand Junction-based manufacturer. “The lower rope powers the upper rope through this double-grooved bullwheel. It’s a very simple, elegant solution to what’s been done in the past with either deflection sheaves or deflection bullwheels.” The drive is located in the bottom terminal, some 4,000 feet away. “It uses less energy so it is a winner all the way around,” says Mauch. Adding the second section to what was previously the Hot Wheels chair gives guests quicker access to the backside of Alpine. “It’s going to change the way Alpine skis,” Mauch says.

For the largest project in the East, Bretton Woods and Doppelmayr partnered to build New Hampshire’s first eight-passenger gondola. The 625 horsepower base-to-summit game-changer opened to guests on Nov. 14 and will operate year round.
There was just one bubble lift added this year, at Montana’s Yellowstone Club, now home to eight such lifts.

Expansions Continue
Both Copper Mountain and Ski Cooper undertook ambitious expansions utilizing relatively simple lifts. At Copper, the Three Bears fixed-grip triple replaces infrequent snowcat service on Tucker Mountain; at Cooper, the Little Horse T-bar anchors the new Tennessee Creek Basin. The T-bar was built with a mix of components from Italy (Leitner) and Utah (Skytrac). “We did all the engineering, installation, and manufactured the towers,” notes Carl Skylling of Skytrac. “The rest of it came from Europe.”

At Idaho’s Tamarack Resort, a high-speed quad returned to the expansive Wildwood zone, a decade after a previous lift was foreclosed on and removed. Powdr’s new Woodward Park City action sports park is another example of new lifts rising on top of ski trails from years past. That facility includes a Doppelmayr Alpen Star quad and two Star Lifts conveyors on the site of the former Parley’s Summit ski area.

Race programs at Sunday River and Vail purchased new T-bars from Doppelmayr. “There was a period of time 15 years ago where we weren’t building any surface lifts,” says Bee. “Now, we average maybe one a year. This year was three.”

The competition is seeing similar numbers. “Race programs, they love surface lifts,” says Mauch at Leitner-Poma. “They’re fast and [the programs] don’t have to have a lot of support staff there.” Plus, T-bars cost significantly less to install. Race teams at Sugarbush and Aspen Highlands are currently considering surface lifts.

Manufacturers Evolving
Skytrac and Leitner-Poma, in their fourth year of common ownership, hit their stride as partners in 2019. They teamed up for a two-lift project at Schweitzer, and completed the first Skytrac lifts with Leitner-Poma sheaves for customers who requested them for parts commonality. “We can offer a customer Leitner-Poma sheaves, or we can go with the Skytrac sheave, which, of course, is compatible with the CTEC stuff,” says Skylling. 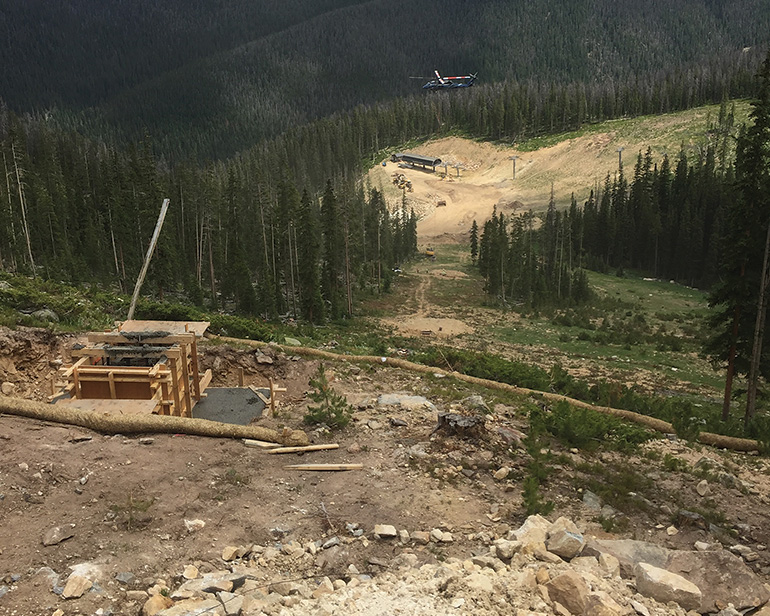 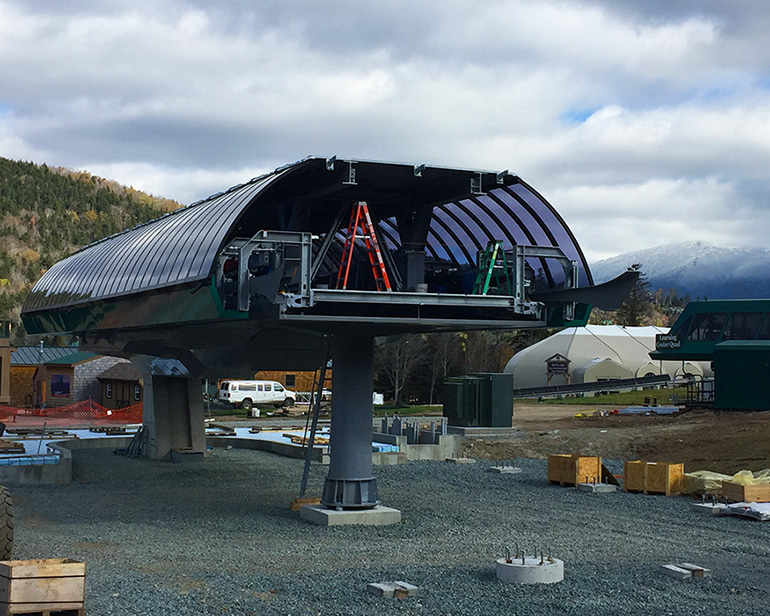 Top: A helicopter speeds the work on the Sunny Side Leitner-Poma lift at Winter Park. Above: Base terminal for the 8-passenger gondola at Bretton Woods, by Doppelmayr.

From Leitner-Poma’s perspective, the partnership has allowed American bases in Grand Junction and Salt Lake to focus on their strengths. “We’ve had a lot more integration with Skytrac teams,” says Mauch. “We operate very closely now.”

Skytrac realized numerous controls upgrades, retrofits, and relocations in 2019. As part of the Copper Tucker Mountain project, Skytrac relocated and replaced a Yan return terminal to make room for the new Leitner-Poma chairlift. “If we have somebody who requests a relocation, it will typically go to Skytrac,” says Mauch. 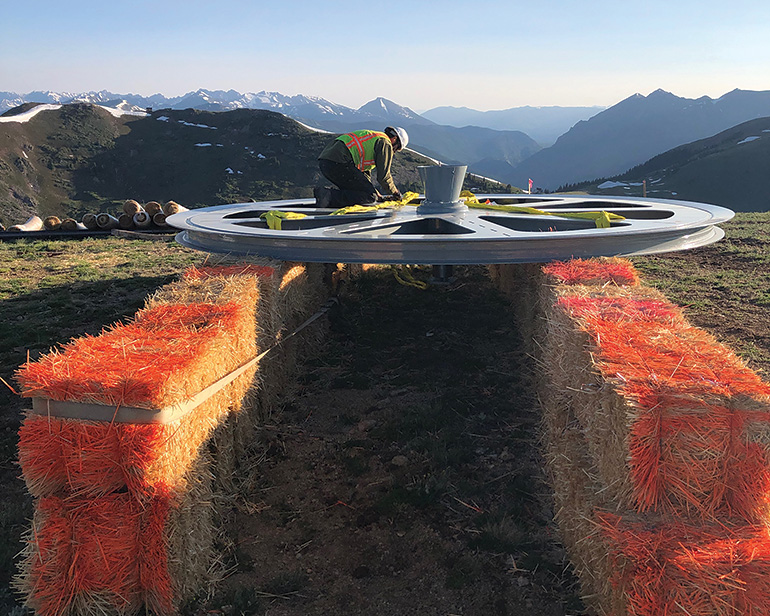 The company also engineered and provided new controls for the move of a CTEC high speed quad at Windham Mountain, N.Y. “Retrofits and modifications, especially to control systems, still seem to be through the roof,” notes Skylling.

Doppelmayr: Nearly all the year’s Doppelmayr projects came with the new Doppelmayr Connect control system, which gives operators and mechanics access to significantly more information in a digital format. “It’s a whole new architecture,” says Bee. “We have more capabilities with the new control system and better diagnostics. When there’s a fault, the operator can bring up information and access drawings and schematics through a touchscreen.” No need to search through books on a shelf anymore! 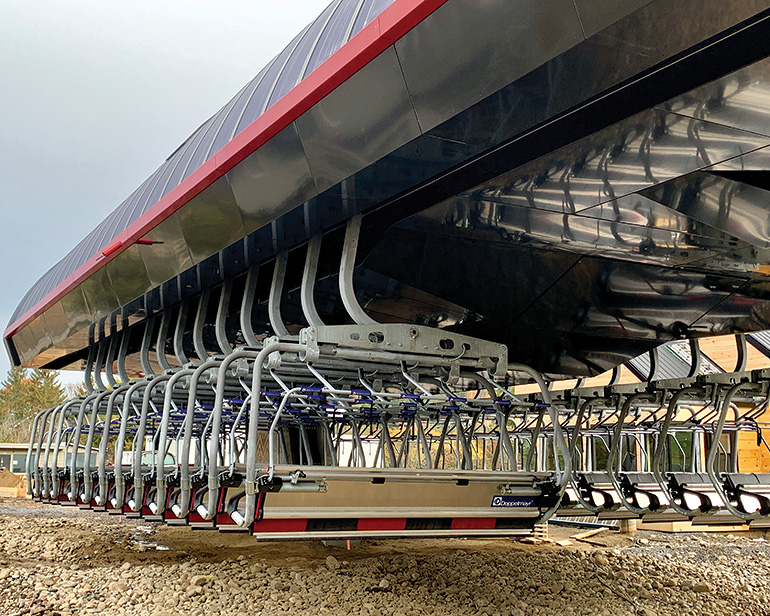 Partek and SkyTrans Manufacturing, both based in the Northeast, completed one lift apiece. MND Group’s LST Ropeways division had no aerial lift contracts in North America this season, but completed a conveyor project in Pennsylvania. Harusch Lifts supplied four platter tows to a new private mountain in Wyoming, plus a handle tow in British Columbia.

Carpets and Covers
The conveyor and tow business was a bright spot for lift construction in 2019. These installations jumped from 41 to 53, second-best in the last six years. The vast majority were new installations in new locations as opposed to replacements. Star Lifts delivered an impressive 35 complete lift projects from coast to coast. 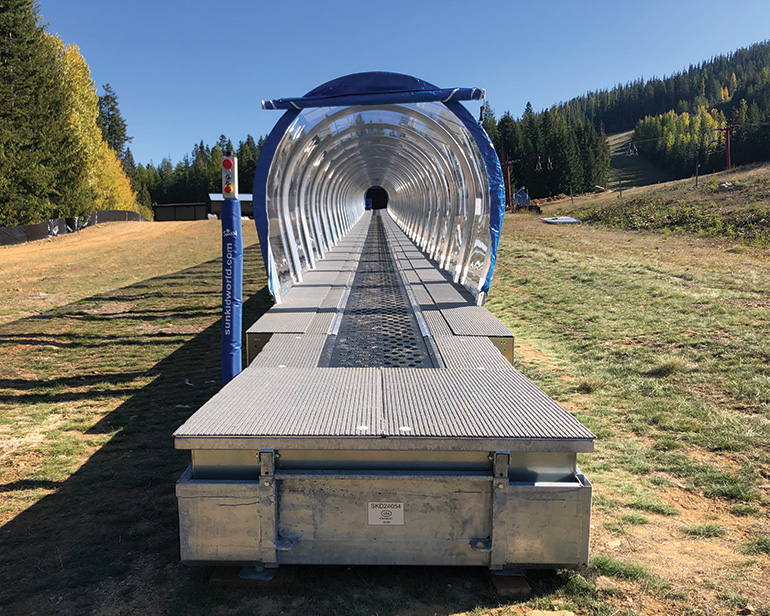 Star Lifts delivered 35 lift projects in 2019, including this conveyor at 49 Degrees North, Wash.

Like last year, manufacturers enjoyed strong demand for covered conveyors, which run better through storms than traditional models. “Areas like Squaw and Alpine had so much snow last year they decided to enclose all of their carpets with covers to help with their labor,” says Conor Rowan, general manager for Star Lifts USA, distributor for SunKid. “It was a good winter across the country last winter. That helped people go forward with some of the projects they had been wanting to do,” he says.

Magic Carpet Ski Lifts delivered 11 complete lifts in 2019, on par with the company’s average, according to owner Jennifer Kelly. 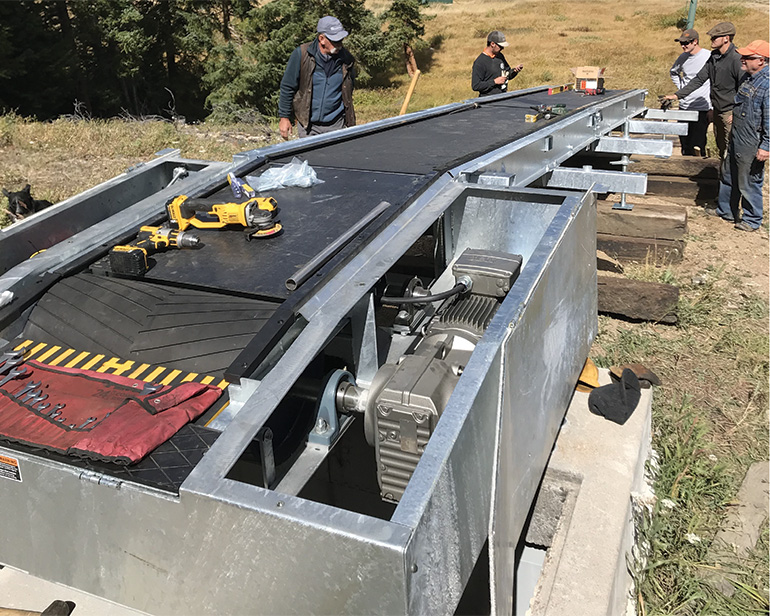 Consolidation Impacts
With resort groups growing seemingly by the month, lift companies are being asked to bid on multiple projects across several areas at the same time. The Copper expansion was part of a major Powdr splurge; the company installed four chairlifts and six conveyors at its resorts. Vail Resorts purchased four new chairlifts for three mountains, mostly newly-acquired Triple Peaks properties. Alterra Mountain Company replaced a triple with a six pack at Winter Park in addition to the Steamboat Gondola and Treeline Cirque projects.

“These big guys come out with their packages and that gets everybody busy right out of the gate,” says Skylling. Doppelmayr’s Bee adds, “Sometimes they come out with early orders, then add more later. It’s a very dynamic situation as they keep adding resorts.”

In addition to scoring volume discounts, the big guys gain marketing opportunities by announcing multiple projects at once. Alterra, for example, unveiled its big-ticket items just one day before the Ikon Pass went on sale last March.

Looking Ahead
Although consolidation continues, the lion’s share of the ski lift business still flows from independent resorts. Manufacturers are bullish about the new decade, with bids going out and some orders already booked for 2020.

While most areas took a break from building feature-packed gondolas and bubble lifts in 2019, that’s unlikely to last long. “There’s more and more interest every year,” says Bee of add-ons like bubbles and heated seats. “I expect we’ll have some next year,” he notes.

The story is similar at Leitner-Poma. “Our customers are really looking at optional equipment such as bubbles and leather seats,” says Mauch.

“There’s a lot of activity out there,” he adds. “We already have four projects on the books. I think it will be a bigger year than we’ve seen in the last two or three.”

“Our order volume is strong,” echoes Bee. “We have a pretty good backlog already on the books. People are ordering sooner than they used to.”

The fleet of fixed-grip chairlifts continues to age and will also affect the sales mix next year. “I think we’re looking at another pretty busy year for everybody,” says Skylling.

All the manufacturers stress that ordering early allows customers more control over commissioning and completion dates. “We get to a point in February or March where we just can’t take any more orders,” notes Bee.